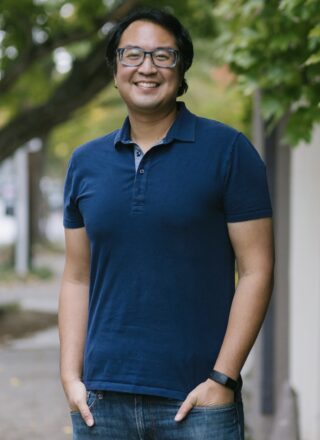 Duncan Hwang wants to be a Metro Councilor. Hwang, who’s currently the interim co-executive director of the Asian Pacific American Network of Oregon (APANO), has launched a campaign to represent Metro District 6, which covers wide swaths of southwest and southeast Portland, and a section of northeast. This seat was formerly held by Bob Stacey, who stepped down last week due to health problems.

On his campaign site, Hwang touts “bringing… crosswalks to my community” as one of the reasons he deserves your vote. “I’m running for Metro Council because I intimately understand the ways our regional government can empower frontline communities to solve our overlapping problems,” Hwang said in a statement released Tuesday. 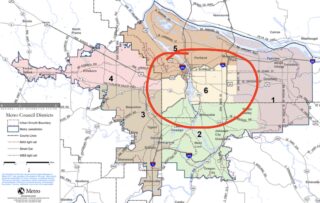 Hwang’s name might sound familiar to BikePortland readers. In March of this year we ran a statement from him about a spate of anti-Asian hate and bias incidents. And in May 2020 we shared his views about open streets.

Hwang has also been a strong voice for safer street designs and infrastructure investments in east Portland and the Jade District, which is where most of his focus with APANO has been during his eight-year tenure with the organization. In 2017, Hwang spoke at a PBOT meeting (held at APANO’s headquarters on SE 82nd and Division) where the city came to apologize for a spate of recent pedestrian deaths and outline a plan to improve safety. He was also part of a coalition that successfully pressured the legislature to invest $80 million into 82nd Avenue as part of a transfer from state to city ownership.

Hwang is the first candidate to declare his intention for District 6, but his path to get there will be unprecedented, and a bit convoluted. That’s because now through early December, Metro Council will draw new district boundaries, a process they’ve decided to take up before appointing a new representative from District 6. Metro Public Affairs Specialist Nick Christensen told us the reason council is doing the redistricting process first is because it will allow other members of council to be unencumbered by where a sitting councilor lives when drawing boundaries.

Also in December, council will open the official application period for District 6 hopefuls. They plan to appoint someone to in Stacey’s former seat through the end of 2022 by January 13th. Then in May 2022 there will be a primary election for the final two years of Stacey’s term (2023-2024), and if no candidate gets over 50% of the vote, it will go over to the general election in November 2022.

Learn more about Hwang at DuncanForMetro.com.

Crosswalks sound good.
However, most important question for all local candidates:
Will you support rapid buildout of short term shelters so we can end the inhumanity on the streets and end unsanctioned street camping?

Yes, we’re ready to provide “short-term” shelters. We’ll be “building back better” corrugated steel shelters along all sidewalks in town. Initially we’ll build 25,000 of them and after a couple of months when word spreads around the country that PDX is providing free hard-walled shelters, we will immediately build 1,000,000 more to accept the influx that will result, then after about 4 months when those are full, we will build 5,000,000 more for the refugees being allowed into the country by the current Federal Government. It’s gonna be utopia on steroids: a marvel of the western world.
🙂

So AMAZING to have dedicated leaders like Duncan (and Ashton for District 1 https://www.ashtonformetro.com/) stepping up for Metro Council districts!

The pipeline of “non profit” workers to elected officials has not worked out well for the Portland area. I think we need more people with real world private sector experience. In my opinion non profit folks often succumb to “magical thinking” once elected. Activists really aren’t good managers. They may know how to engage people for change but then can’t manage complex, nuanced problems.

Vote Up2Vote Down  Reply
« A new way to follow BikePortland comments – UPDATED
Family Biking: How bikes can save the day for kids with special needs »