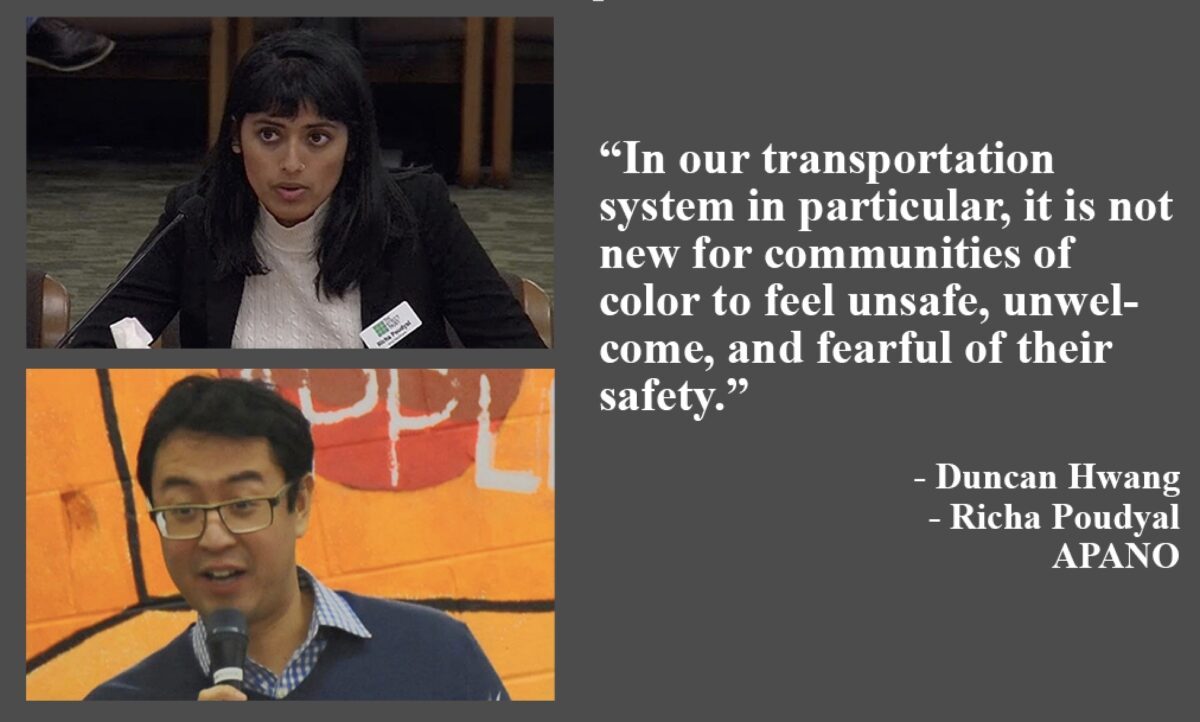 (Publisher’s note: This statement was co-authored by Asian Pacific American Network of Oregon (APANO) Associate Director Duncan Hwang and Policy Director Richa Poudyal. Duncan first reached out to me back in January after a spate of hate crimes targeting Asian-American and Pacific Islanders (AAPIs) occurred in Portland. We were working on a guest post about the how these crimes relate to transportation and use of the right-of-way. In light of the tragic shooting in Georgia last night I wanted to get the statement up sooner rather than later. BikePortland stands with APANO and other groups in calling out these hateful acts. – Jonathan Maus.
___

Last year, Hood River bike shop Dirty Finger Bikes posted anti-Chinese rhetoric on their shop chalkboard under a justification of “free speech”; the owners responded that they were simply joking and repeating what was heard on the news that day. He later apologized that folks were offended by the language, but did not apologize for using the language in the first place. While seemingly harmless to some, the truth is that using language like “kung-flu” or jokingly thanking China for a global pandemic validates xenophobia and creates a direct pathway for violence against Asians. Today we are seeing this correlation play out in a surge of both hateful rhetoric and physical violence against Asian Americans.

In the last month, Asian American community members in the Portland area have been physically attacked while using public transit. On December 15th, a person was assaulted at a MAX stop after they were asked if they were Chinese, and on January 22nd an Asian-American woman and her son were physically assaulted on a TriMet bus. Race was named by the perpetrators of these assaults, as it was in another January 22nd incident involving anti-Muslim slurs and intimidation at a gas station in Southeast Portland. Many Asian-owned businesses along 82nd Avenue and in the Jade District have also recently reported incidents of vandalism.

Of course, today, we are also grieving the mass shootings that occured in Georgia.

On a national level, violence and bias incidents against Asian Americans have inexcusably escalated across the country: In a report released in August 2020, the Stop AAPI Hate reporting center documented over 2,500 reports of Anti-Asian hate incidents nationwide between March and August 2020. Closer to home, the Oregon Department of Justice bias hotline has received 68 reports from Asian Americans since January 2020. Whether all incidents were racially motivated or not, this kind of hatred and violence has profound impacts on Asian American communities – our community members are afraid of being in public places, taking public transportation, going on a walk, and simply living their lives freely.

Incidents like this one underscore what Asian American and other leaders have been warning: Words matter. The increase of hateful, racist rhetoric targeting Asian Americans during the COVID pandemic creates real harm. Since the start of the pandemic, we have seen and condemned the use of phrases like the “China virus” and attempts by national and local leaders to scapegoat Asian Americans in the face of a global pandemic that has disproportionately affected Black, Indigenous, Pacific Islander, Latinx, and other people of color and that we must address collectively. Even what appears to be a joke on the chalkboard of a local bike shop is the type of rhetoric that fuels hatred and racism towards Asian Americans and leaves room for others to take it a step further into perpetrating violence.

Asian Americans are hurting and feel unsafe in their own communities, and they are certainly not the only ones. The most common motive for hate crimes and bias incidents in Oregon in the past year was race, and the majority of victims of those crimes were Black people. The indigenous, Latinx, immigrant, and Muslim communities have also been targeted during this time. We must all, Asian Americans included, recognize that violence affects everyone and especially our Black friends and neighbors, who have long faced the constant threat of violence in their daily lives.

As leaders and community members address hate, we must also call for a focus on and investment in transformative justice. We do not need more law enforcement. Police do not prevent these crimes and too often community members do not report incidents to them due to language or other barriers or fears of immigration enforcement. As we saw on January 6th, members of law enforcement can sometimes embolden and enact white supremacist violence. AAPIs need community-centered solutions that prioritize healing for survivors of hate crimes. Our communities need holistic tools besides incarceration to help transform the bigotry underlying such violence. We need to continue to uplift the calls of Unite Oregon and Imagine Black and so many BIPOC organizers to divest from the police and invest in the health of Black and Indigenous communities of color.

In our transportation system in particular, it is not new for communities of color to feel unsafe, unwelcome, and fearful of their safety. For anyone who thought the incident at Dirty Finger Bikes last year was harmless (or think any verbal aggression against any racial identity is harmless), we hope that it doesn’t take any more physical violence for it to be clear that harmful words in a world of systemic racism will absolutely create real harm.

We create safer communities by addressing words, jokes, slights, and comments that underlie these more violent actions – and it is incumbent on all of us to do this. Hollaback!, in partnership with Asian Americans Advancing Justice, offers resources and trainings for bystander interventions. When these incidents do occur, there should be a culturally responsive, survivor-centered system where people can report them and where appropriate support for those affected by harassment are made available.

Community members who have been impacted by a bias-driven incident can refer to APANO and Portland United Against Hate’s (PUAH) Resilience to Hate Resource Guide. Incidents can be reported to PUAH at www.reporthatepdx.com, the Oregon Department of Justice’s Bias Response Hotline at 1-844-924-BIAS, 711 for Oregon Relay, or at StandAgainstHate.Oregon.gov.