Metro Councilor Bob Stacey’s retirement marks end of an era, and a connection to the past 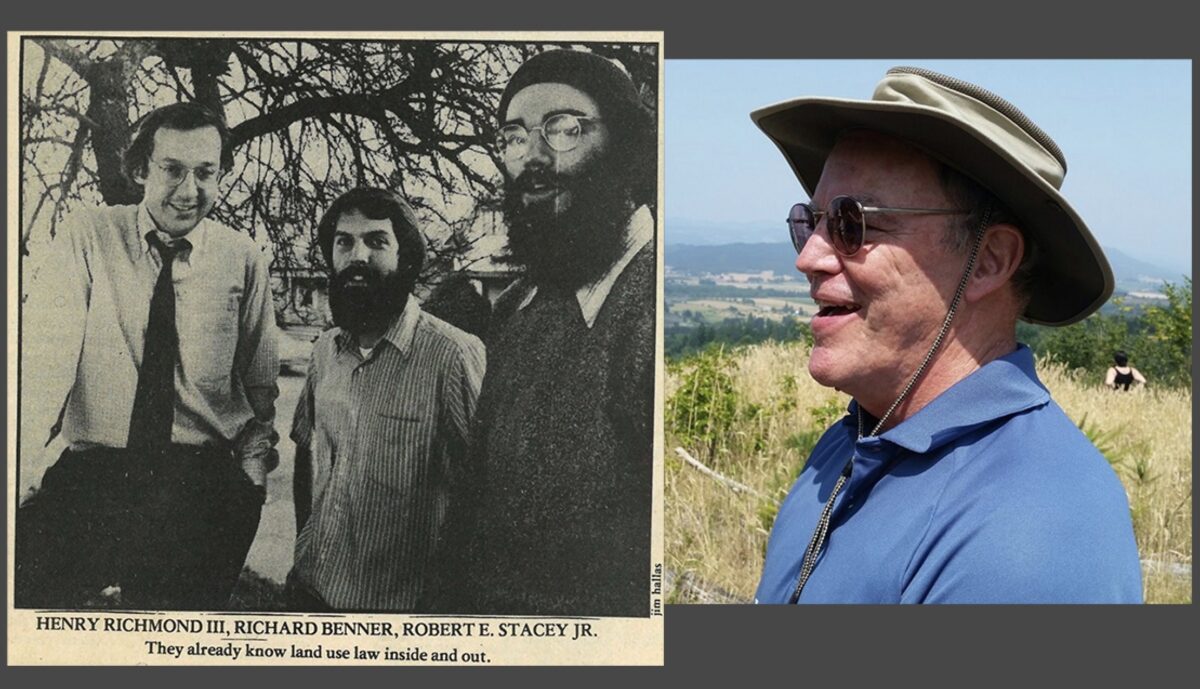 Left: During the early days of land use nonprofit 1000 Friends of Oregon. Right: On Chehalem Ridge.
(Images: Metro)

This article was written by Metro Public Affairs Specialist Nick Christensen and first appeared on OregonMetro.gov.

When the Metro Council adjourns today, it won’t just be the end of a meeting. It will mark the end of an era.

With the crash of the virtual gavel, Councilor Bob Stacey will finish his last meeting on the elected body, ending one of the final links between today’s regional government and the founding era of Oregon’s land use program.

Stacey, 72, announced in September that he is stepping down from the council for health reasons on Oct. 15. By Jan. 13, the Metro Council will select a new representative for Metro District 6.

But the links Stacey has to the past?

Consider: When former Oregon Governor Tom McCall launched the state’s land use planning program in the 1970s, in an effort to keep the Willamette Valley from turning into a Sunbelt-style endless suburb from Portland to Eugene, he tasked the late Henry Richmond to organize an advocacy group called 1000 Friends of Oregon. And Richmond’s first hires?

“I was in Henry’s office, and I look on the wall, and there’s a plan map of downtown Portland,” Stacey recalled. “I was standing there staring at the streets, seeing the buildings, and the zoning patterns, and Henry says ‘Bob, are you interested in land use?’”

“This is fascinating stuff,” Stacey recalled replying. Some might have been sarcastic. Stacey was earnest and hopeful.

Senate Bill 100, passed in 1973, was a direct response to how the rest of the country was growing. As McCall urged its passage before the Legislature, he evoked the horrors of other places “where progress has fallen prey to expediency.”

“There is one shameless threat to our environment, and in the whole quality of our life, and that is the unfettered despoiling of our land,” McCall reported to the Legislature. “Sagebrush subdivisions, coastal ‘condomania,’ and the ravenous rampage of suburbia here in the Willamette Valley all threaten to mock Oregon’s status as the environmental model of this nation.”

Where McCall asked for a new vision for Oregon’s growth, Stacey was the target audience. The son of a service member, he grew up in Portland but spent long periods of time abroad, including most of high school in Frankfurt. He graduated from Parkrose High School in East Portland, and his parents eventually settled in Lents. Stacey often commuted by bicycle to the 1000 Friends offices in downtown Portland from his parents’ house, an 8-mile ride. 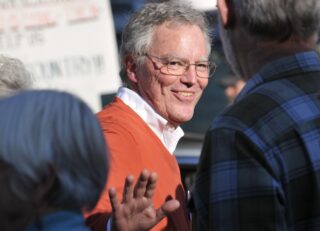 At a rally for Barack Obama in 2010.
(Photo: Jonathan Maus/BikePortland) 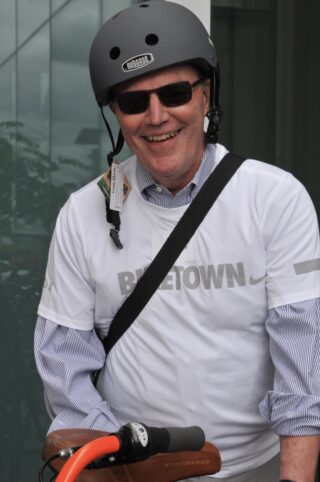 At the launch of Biketown in 2016.
(Photo: Jonathan Maus/BikePortland)

“I had wanted to do something for environmental protection and saving the planet,” Stacey said. “We had the first Earth Day in 1970, when I was a sophomore. I remember that as an initial pull toward environmental politics as the Vietnam War politics were cooling down a little bit.”

At 1000 Friends, Stacey was assigned to work on legal issues around the Portland metro area, with its nascent regional government, CRAG – the Columbia Regional Association of Governments. As the court docket stacked up with cases stemming from the passage of Senate Bill 100, Stacey was furiously filing legal briefs and arguing about the new land use system.

“I remember watching the reaction of these judges, who didn’t know much about the new law,” said Benner, the other young attorney at 1000 Friends. “The tradition in the United States is, the state has no role in this. (Zoning) is about cities and counties. And here are these judges listening to (Bob) making an argument that no, when the law says X, it means X. We were quite successful in those early cases.”

It was busy work. “Rip and read, file a brief, get down there and argue it,” Stacey said. But it created precedents that hold to this day, some of which were in unlikely places.

Stacey was at the forefront of 1000 Friends of Oregon’s battles with the Rajneeshee cult that was attempting to take over Wasco County’s government and build a city on area that was designated for farmland. That group later launched a bio-terror attack by poisoning salad bars in The Dalles, sickening 751 people.

It wasn’t their first poisoning attempt.

One day, a box of chocolates arrived at the 1000 Friends offices in Portland. Stacey dove right in, noting that it the chocolates were signed as “From the Friends of the Columbia Gorge.”

“So I called Bowen Blair, the director of Friends of the Gorge, who had his offices a couple of floors above us,” Stacey said. “He calls back and said ‘We didn’t send you any chocolates!’ Meanwhile, the other line is blinking, and it’s one of our allies in Antelope (in Wasco County), and he said ‘Bob, we got a box of chocolates from 1000 Friends…’”

Stacey didn’t get sick. But the message from the Rajneeshee leadership was clear – they weren’t backing down. It wasn’t until after the poisoning in The Dalles that the group gave up on their dream of a commune in the Wasco County hills.

In the 1990s, as Portland changed and adapted to its new land use framework, Stacey went from activism to activation. He led Portland’s planning bureau from 1989 to 1993. He was an executive at TriMet during the planning of the MAX Yellow and Red lines. He served as Rep. Earl Blumenauer’s chief of staff, a tenure that the 25-year congressman recalled on the U.S. House of Representatives floor last month (watch below).

“He was always clear-eyed and visionary, but thoughtful,” Blumenauer said, choking up. “And all while being one of the nicest people you would ever want to meet.”

“Bob is all of the things you hate in a competitor and love in a colleague,” said Hughes, who served with Stacey on the Metro Council from 2013 to early 2019. “He is wicked smart, articulate, and passionate about finding ways of doing the right thing.”

Stacey went on to run for, and win, the District 6 seat in 2012, the same year he was diagnosed with meningioma, which causes tumors to grow in and around the skull. The disease was managed with limited impacts in his 9 years on the council, including a surgery to remove the tumors in late 2013. He was re-elected in 2016 and 2020. He said he regrets that he won’t be able to continue working on the evolution of Portland, particularly its eastern third.

After he leaves his post at Metro, Stacey will travel down the Oregon Coast with his wife Adrienne. The legacy, though, back to the nascent days of regional planning in the 1970s, will continue on.

“People talk about regional strategies, and it’s all ultimately mush unless you have three or four strong leaders who come up with some sort of political strategy. It’s temporary, and it’s not institutionalized,” Stacey said of other regions in the United States. “Here, we have a regional government that has actual authority over land supply and transportation, that works to coordinate growth strategies of the cities and three counties and has the authority to implement investment and regulatory strategies.

“We have a competitive advantage, to be emulated. I am really optimistic about the region’s prospects, in terms of economy, growth, development,” he says, and pauses, “and the resources that keep this place special.”

— Get our headlines delivered to your inbox.
— Support this independent community media outlet with a one-time contribution or monthly subscription.

Boy those were the good old day. The bottle bill, the beach bill, pioneering land use planning and those cool James G Blaine society bumper stickers.The Rajneeshees had a bar in downtown Portland where you could get a beer for 10 cents.

I got to work with Bob for a minute back during the Blumenauer days. He ran the DC office and I was in-district, so I didn’t work with him day-to-day. But he was always a very lively, funny guy. Frequently smiling, always joking.

Below is a link to a planning and analysis document that helped with the conversation back in the 1970s when facts mattered.
https://oregonexplorer.info/content/the-willamette-valley-choices-the-future?topic&ptopic

We all owe Bob a debt of gratitude for his dedication, intellect, and quiet determination to make Oregon a better place. He stepped down in part because he felt the treatment regimen was making it too difficult to analyze complex subjects. Even with this treatment-induced fuzziness, Bob is still smarter and wiser than almost anyone. Take care, Bob.