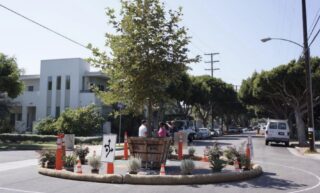 Example of temporary roundabout that will be installed in the Portsmouth neighborhood.

A mini-roundabout could be coming to a dangerous intersection in the Portsmouth neighborhood of north Portland later this year thanks to an inspiring partnership between the César Chávez K-8 School community and Portland State University.

The intersection of North Portsmouth and Willis has been known for years as a hotspot for crashes and near misses. When a school student was hit by a driver in 2020, local advocates stepped up and nominated the intersection to be part of the Better Block PSU pathway program. As we’ve shared in the past, leaders with nonprofit tactical urbanism group Better Block have forged close ties with PSU urban planning students and the school’s Transportation Research & Education Center (TREC).

The program gives community leaders a chance to submit project ideas that, if selected, will be given the attention of graduate planning and engineering students — as well as professional consultants and transportation agency staffers. In this case, the Portsmouth-Willis intersection was submitted by William Francis and Hanna Howsmon from the Community Cycling Center and Sam Balto, a noted safe streets activist and former César Chávez teacher.

This trio brought more than a project idea to the PSU process. They brought community knowledge, relationships, and buy-in. Once the project was chosen for review by PSU students in the fall of 2020, it was chosen to move onto the second phase of the pathway and became a capstone project for a PSU Civil Engineering course taught by professor Evan Kristof.

Kristof assigned the project to thirteen of his graduate engineering students. Led by Kristof and student Raymond Poss (who now works at Washington Department of Transportation), the team started by collecting community feedback about the intersection (with a big assist from the Community Cycling Center, who delivered surveys by bike on their food deliveries in the neighborhood).

They heard many people say they avoid Portsmouth because it feels so unsafe. “Muchos no respetan las señales de alto (Many do not respect the stop signs),” was a common refrain.

The team then developed three possible alternative designs: a mini-roundabout, curb bump-outs, and a raised crosswalk. They scored each of these (and a “no-build” option) against a list of criteria. In the end, they chose the mini-roundabout (with bump-outs a close second) and then set forth with community members to garner design ideas on how to make it functional and aesthetically pleasing.

The 13 PSU students shared the final, 49-page presentation of the project with professor Kristoff earlier this month. We assume they received an A!

Armed with all the required feedback, data and engineering work, the last step is to receive a permit from the Portland Bureau of Transportation (whose staff helped on the project) to host a three-day community event to install the roundabout.

“We’re looking to host this community event in the fall, before the school re-opens, so we can bring the community together to collaborate and raise awareness of traffic safety around César Chávez,” said Better Block leader Ryan Hashagen. “This is an opportunity to showcase what the community and PSU students have to offer, and engage the city in discussing a long-term solution to pedestrian safety.”

If you’d like to get involved with the installation event, contact Hau Hagedorn with TREC at hagedorn@pdx.edu.

Excellent work project team! We can’t wait to see how it turns out. 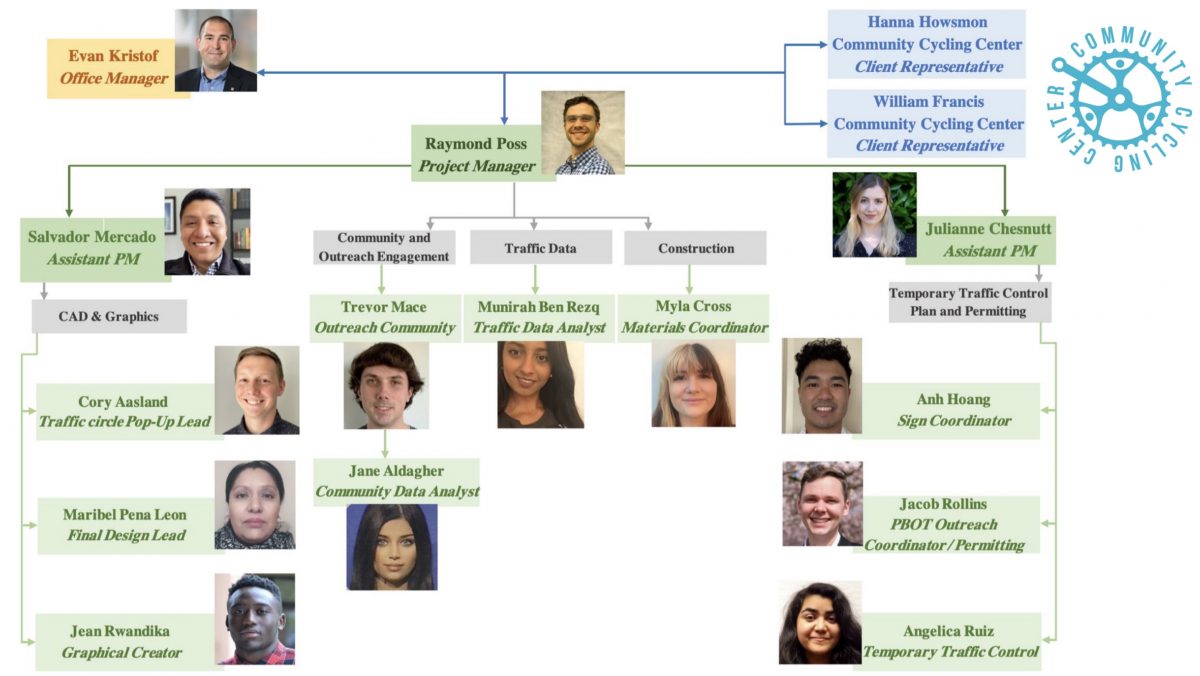 “Many do not respect the stop signs” is the main reason PBOT (and pretty much every other DOT nationwide) has resisted calls to put them at every intersection (neighborhood associations regularly make this very naive request.) There’s no point in putting up any signs if an overwhelming majority of users are simply going to ignore them, be it a 15 mph speed limit or a no-jaywalking sign.

I am however curious. Portland already has numerous permanent mini-roundabouts (traffic circles) on Clinton, NE 24th, and elsewhere. How are they working out?

I’ll say that I’m not a fan of the ones I’ve ridden through, speaking anecdotally. Since they force drivers to the outside of the road, they force drivers right to where cyclists usually ride, actually creating new conflicts that don’t exist without them. I’ve had a few close calls from this while biking and running, where drivers move to the outside around the circle without paying attention to cyclists, walkers, or runners.

I’d rather see raised crosswalks, which I’m a big fan of. When I do drive I find that raised crosswalks get my attention to the fact that there’s a crosswalk present, and as a runner I find that they make it more likely for drivers to stop for me. As far as I can tell they really don’t have a single downside, plus to me it seems like they’d be significantly cheaper.

FWIW, I’m not a fan of the mini-roundabouts, way too many motorists have attempted to pass me at the roundabouts in Ladd Addition.

Ditto to everything you said.

On any road with a mini circle that I’ve seen in Portland (e.g., along NE 7th and 24th) they’re usually on narrower roads. I will never share the lane going around one of those and will always take the lane before reaching one if I’m not already taking the lane the whole time. There’s simply no excuse for a driver trying to squeeze by a rider at a traffic circle. Nor does it help when drivers coming in from the side streets overshoot their stopsigns and encroach into that space too. Not taking the lane around a traffic circle is just inviting problems to happen.

They do sort of help. Near me cars on the 20mph street slow down from about 35mph to around 15 to get around so it does make it easier to cross the intersection when walking. People really don’t follow the traffic laws in Portland as there is no enforcement since the police traffic division has been disbanded. 🙁

I saw a police motorcycle on the street yesterday, but of course I don’t know what their assignment was.

I believe people don’t respect traffic laws because:
1. Our culture glorifies the use of banal transportation devices for misbehavior.
2. Motor vehicles are ALL overpowered compared to what is needed for legal operation.
3. Cars insulate users from the world and the consequences of their actions.

We will never have enough police on the street to watch everything (in sports where multiple officials watch 10 or 20 players there are still missed calls).

Having said that, the 10 mph cushion before a ticket is issued is ridiculous. Our measuring tools are way better than that. We should have a civil, meaning non-violent, agency that has the power to ticket the registered owner of a vehicle if the vehicle is observed to go 3 mph over the posted speed limit in any place, at any time. The data collected would be made available to criminal law enforcement only on the basis of a subpoena.

I think that because there is such a negative attitude about driving a car that it discourages developing the least bit of skill as a driver, lest you be seen as an auto enthusiast and shunned by Portland progressive society.

Neighborhood traffic circles are not mini-roundabouts. Mini roundabouts are all-way yield and only truck apron – no planter space – so large vehicles, like the bus that turns here, can track over them.

Agreed, that and roundabouts are specifically engineered to aim vehicles in a direction to merge with traffic, not turn sharply into traffic (as evidenced by the islands in that first video above). The side streets meeting throughway streets with mini traffic circles do not have such engineering. The mini-circles in portland are traffic calming devices, not traffic control devices.

I’m curious to know what would trigger an intersection like this to be completely re-hauled and moved into the 21st century and the realities of our traffic volumes in the city . For example, this location seems like a good candidate for something truly robust, maybe something like a four-way stop light .
I see a lot of this older-looking infrastructure around town, and wonder why we haven’t upgraded it .
Anyhow, a little off-topic I guess, kudos to TREC & Better Block.

An actual safety problem that can be solved by the proposed design. Signals cost about a half million per intersection. For 2010-2019 this intersection had 5 reported crashes. This is not the intersection for a signal.
A bus turns here also, so a traffic circle will not fit unless the corners are changed.
I would not have given the report better than a B.

Of course, that makes sense Paikiala. Thanks. Sometimes I kinda think with my my fingers on the keyboards and ruminate about it for a while later on. Your points are salient. Thanks for responding.

Hmmm, I have lived near this intersection for nearly 20 years, use it frequently while riding and driving and have never thought of this intersection as any more or less dangerous then any other four-way stop. Seems completely unnecessary.

https://www.mprnews.org/story/2021/07/23/minneapolis-council-restricts-semi-parking-on-city-streets
Parking restrictions may work in Minneapolis but they wouldn’t work in Portland.

We can’t even get people to park on the correct side of the road, half the cars are parked facing oncoming traffic. Can’t even describe how frightening it is at night to have someone start their car turn on their lights and drive right at you until they reach the oncoming traffic lane.