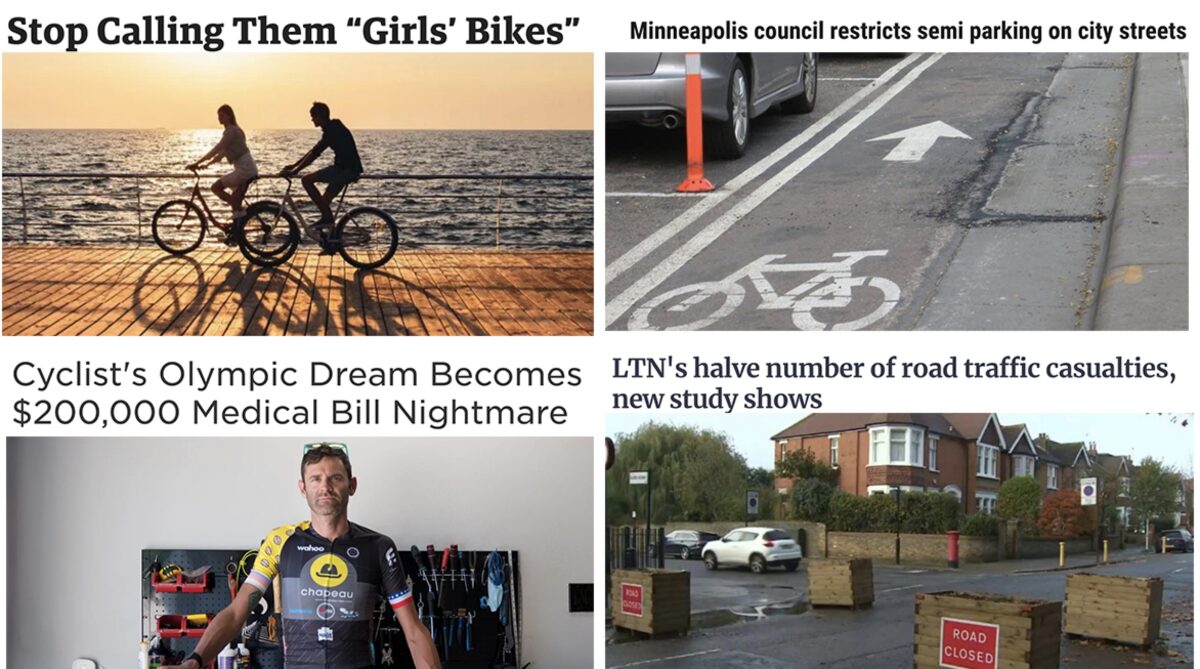 Infrastructure update: Lots of action with federal transportation legislation. All eyes are on the Senate as advocates fight to boost transit funding. Get the latest from Politico and check Streetsblog for a good rundown of where things stand. One major bummer so far: The “Reconnecting Communities” initiative that would have subsidized freeway removal has been nearly wiped out.

Hollywood’s influence: One of the major barriers for cycling in America is how it has been portrayed in movies. Slate breaks down the damage done by ill-fated and uncoll bike-riding characters on the silver screen across the decades.

Eugene outlook: UO’s school newspaper says the university town is riding a wave of increased cycling since the pandemic hit and local experts hope the City of Eugene can keep pace with quality cycling infrastructure.

Open up the highway fund: This article is mostly about how Oregon House Rep Khanh Pham put together a coalition to pass massive clean energy legislation; but don’t miss the part where she says it’s time for us to “open up” the highway trust fund to uses beyond just car-centric road and bridge projects.

The other core: The hot new training trend for competitive cyclists — and Olympic gold medal winners — is to measure core temperature while riding.

Step-throughs rule: Far from just “girls bikes”, Eben “BikeSnob” Weiss explains why bikes with very low top tubes are so useful and why the industry should embrace them.

Can you fix the LTN link?

RE: step through bikes; I saw a trek Verve that was converted to a MTB and it looked real cool. Once people get past frame “looks” it opens up a lot of possibilities. I always liked getting on a BIKETOWN bike for that ease of use.

yep. Fixed that link EP. sorry about it https://road.cc/content/news/ltns-halve-number-road-traffic-casualties-285123

You cannot measure core temperature on the surface of the body. I guess if you call your product “Core” you can.
I am looking forward to the Garmin bluetooth rectal thermometer.

I guess then we will need to buy a new “core saddle” to accommodate the “core thermometer” and then a “core seat post”….

Why not just set up a Bluetooth connection to your covid vaccine microchip? (/s)

You’ll need a password from the Kremlin to do that.

I think the question is to what accuracy can you model internal temperature by using skin/atmosphere temperature flux and hr. This company claims they can reasonably approximate (for the proposes of performance tracking, not medical diagnostics) an internal thermometer without invasive means. Most, if not all, measurements are done at some sort of distance from the subject. BP cuffs don’t tap off an artery and measure the pressure of your vascular system directly. But it is important to know how devices come to their metrics, see Pulse Oximeters difficulty reading correctly for some people with darker skin.

Yes it’s PR, and maybe they should have called it “Temp Flux” or something. But I don’t think there is any real trickery going on here.

Maybe it’s one of those debates that could go on forever, but I’m just not sure that easy mounting and dismounting with a low top tube is better than the features often lost or worked around because of it. My cargo bike makes the best case for it, but if it’s hard to get on or off there are likely bigger problems to endure.

The infrastructure bill appears to be a net negative for climate/biking/transit. The good of a few pieces will be far outweighed by the carbon spew from more freeways and other polluting projects.

Once the LTNs were in place, injuries fell to a ratio of 0.51 to 1 in comparison with the rest of London during the same period.

In contrast, there was no observable reduction, as against the rest of the city, in injuries from 2018 to 2019 within the future LTN areas.

The fact that Portland appears to be giving up on the NG traffic calming policy it helped craft (widely emulated in other cities) is just another indication of how transportation cycling in Portland is in serious decline.

Step through frames are great!
Now, can we please stop calling it the granny gear, too?
Mm thanks.

I did enjoy the Hollywood article on anti-cycling propaganda…and yep, Bernie and Biden do bike between limo rides…but remember who made cycling cool and great again [in NJ] way earlier: Trump. Tour de Trump 😉

Middle of the Road Guy
Reply to  Todd Boulanger

Armstrong won the last one but it was rigged!

Joe is a car guy, he has a small collection of vintage cars. His favorite is a 1967 Corvette Stingray.
https://www.newsweek.com/joe-bidens-car-collection-corvette-stingray-electric-ford-1592808

RE Eugene Outlook – A key issue is the city’s plans for a car-centric roundabout redesign of Franklin Boulevard along the UO campus. The suburban-style plan will increase walking and biking distances and decrease safety and discourage alternative modes in favor of speeding large volumes of cars through intersections where cars never have to yield to vulnerable users. The plans will waste huge amounts of land in the center of the city create such roundabout walking distances that the area will never develop with walkable, livable density. A better, cheaper plan would be a road diet for the overbuilt car sewer in favor of separated cycle tracks, wide sidewalks, transit, trees, less carbon and more livability. If UO students want to do something real about climate change, they need look no farther than the pipeline of climate combustion on their doorstep.