Delays push back opening of Blumenauer Bridge over I-84 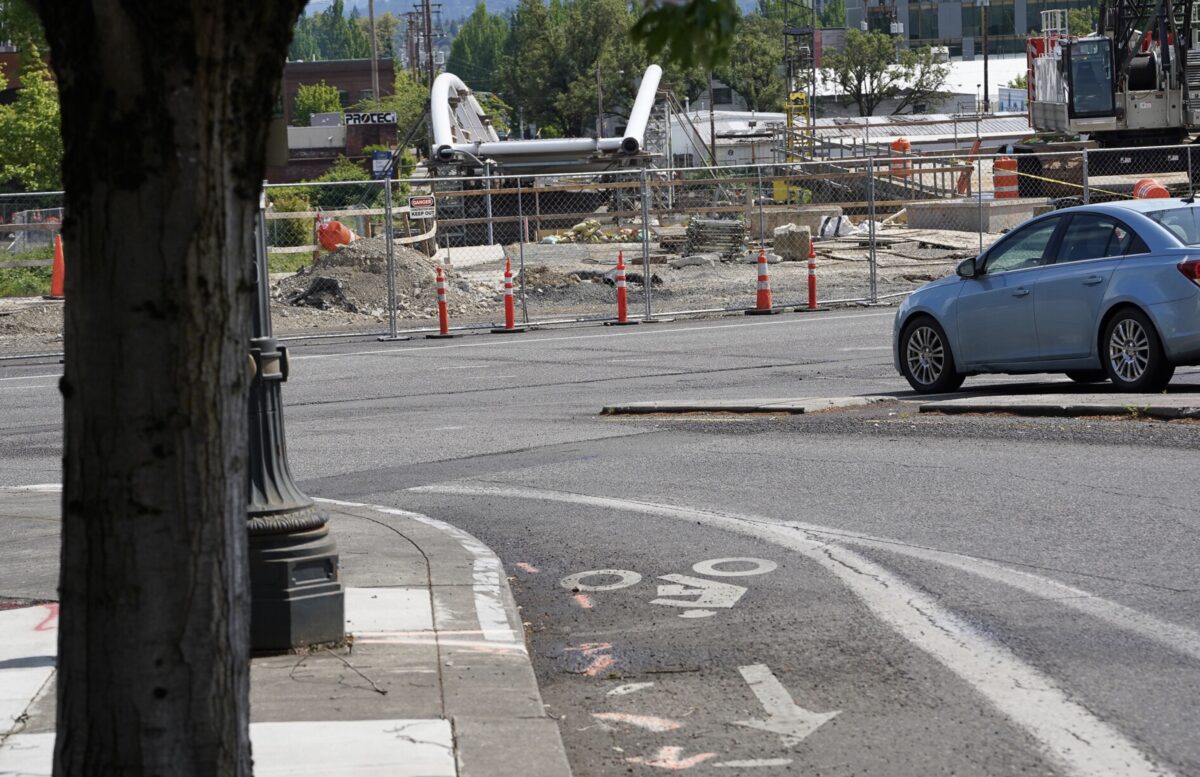 With so much attention on the Flanders Crossing Bridge that opened last week, lots of folks have wondered what’s up with the other carfree bridge currently under construction: The Congressman Earl Blumenauer Bicycle and Pedestrian Bridge that will someday connect the central eastside to the Lloyd via 7th Avenue.

When we last checked in on it seven months ago it looked like installation of the bridge’s 475-foot span over Sullivan’s Gulch and Interstate 84 was imminent. Work on the $14 million project began in November 2019.

Initial estimates from the Portland Bureau of Transportation said the bridge would be moved into place in August 2020 and would be open for traffic by spring of this year. But the swooping arches that rolled into place last winter haven’t budged for months. Now it appears it could be spring 2022 before we’re able to walk and roll across this new bridge.

Similar to what happened to I-405 when the Flanders Crossing was installed, the placement of the bridge over Sullivan’s Gulch will require a full closure of I-84 in both directions for one weekend. This means PBOT must get approval from both the Oregon Department of Transportation and Union Pacific Railroad before they lift the bridge across the freeway. Given that I-84 is a much more significant freeway than I-405 and the fact that the gulch includes both heavy and light rail lines, it’s understandable that getting sign-offs on a full closure is complicated.

A source close to the project said PBOT hopes to install the bridge this coming weekend and a tentative opening date would be early 2022.

Asked to confirm the delay and these new dates, a PBOT spokesperson said only, “We’ll have some news soon.”

Seems to me they missed an ideal window in the depths of the pandemic. I-84 was dead there for a while.

Agreed, but they have to get the site engineered before a pre-fab bridge can be dropped into place. Soil engineering and shaping are some of the most time-consuming parts of any transportation project. And that’s before you even get to put in the anchor pilings and base mounting sites. Mess that up and the entire project is compromised.

bummer! i thought this was going to get completed in 2021. while the flanders bridge is certainly exciting, this bridge is a gamechanger!

It says a lot about our society’s priorities that a new bridge has to be delayed for months or maybe a year just because installation would require a railroad and freeway to be closed for one weekend.

Freeway, major transit rail, and major shipping rail. That’s why the 405 was easier to close for a weekend. It was just for a freeway and nothing more.

The reasons you mentioned (And don’t forget the MAX! )…PLUS our “local” regional transportation networks do not have a lot of alternative route capacity…unless you want to shunt car, truck and rail traffic up to the north side of the Columbia etc. As for rail…this reminds me of the lack of “optional” routes when I-5 and the north south rail routes were severed by the Amtrak derailment near Dupont WA.

Ah, good catch and good point! MAX is up on surface streets starting at 12th Ave and heading west.

I sure hope the Union Pacific Railroad isn’t trying to sabotage this Safety Bridge. We needed this bridge years ago.

Installation THIS WEEKEND? And PBOT has made no public announcement?

I planned on watching it from my office building, so a schedule would be really helpful.

The weekend has come and gone. And almost three months. So what is it now?

Vote Up0Vote Down  Reply
« The Monday Roundup: E-bikes for kids, greenway stimulus, Portland’s unbuilt freeways, and more
PBOT’s ‘Streets 2035’ initiative is under the radar, but could have vast implications »