Who rides bikes in Portland? If you’re a veteran BikePortland reader you know the answer is much different than the caricature created by popular media, political narratives, and cringey stock photos.

It’s now been over 10 years since our first People on Bikes post. One reason we love sharing these images is because they can often prove popular perception wrong. The people on bikes in Portland are a very diverse bunch: Different styles, different bodies, different destinations, different bikes. And I think our bicycling population looks even more different because of the pandemic.

Since the mid 2000s, rush-hour bicycle traffic on commuting corridors in Portland was a given: Williams, Vancouver, Hawthorne, Broadway, Waterfront Park, and so on. But the pandemic changed all that. The last People on Bikes we shared was from Hawthorne in February 2020, right before lockdowns hit. With so many people working from home, our streets look a lot different these days. While there aren’t as many predictable platoons of professionals pedaling, Portland streets are still full of riders.

I captured a few of them over the weekend. One of them was Sheldon. Sheldon lives in a tent on Williams near Broadway. I met him on that grassy knoll on North Larrabee just north of the Broadway Bridge and struck up a conversation. 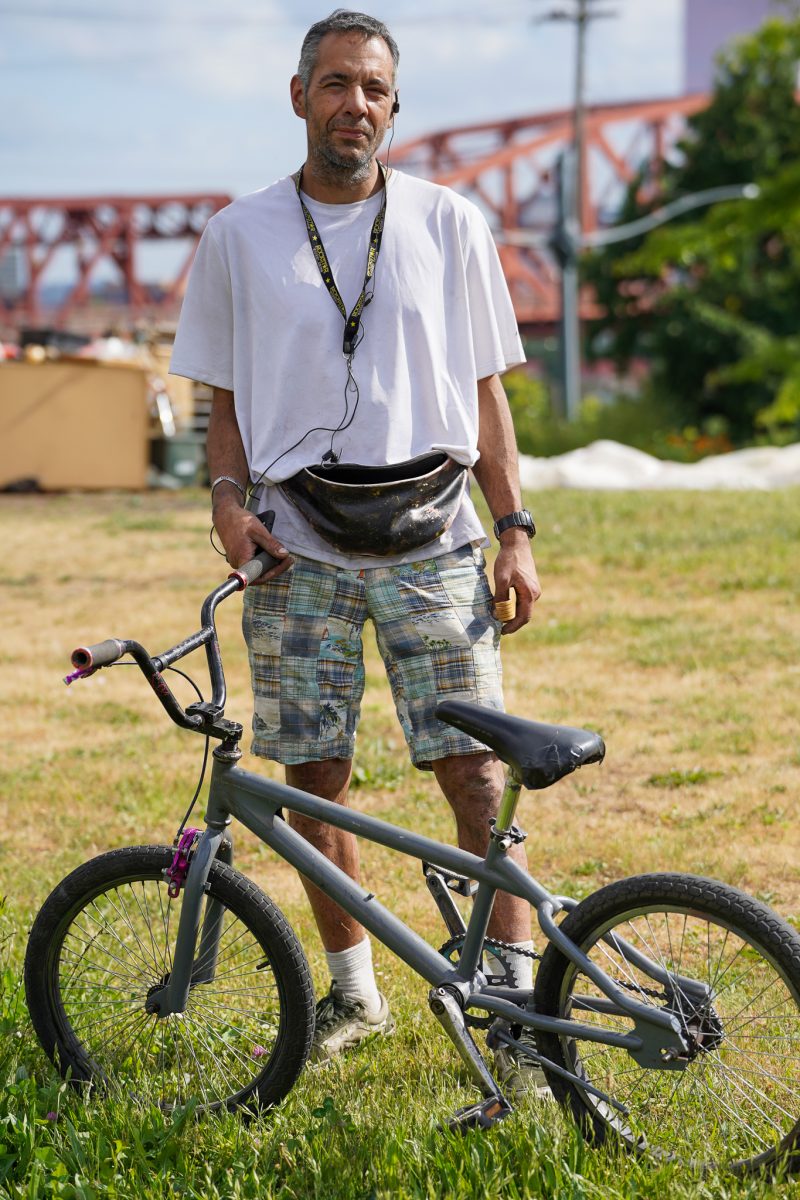 Sheldon and his 20-incher.

I asked Sheldon about his bike — a 20-inch BMX/flatland style rig. “I like this small bike,” he said, “Because I can fit it inside my tent and don’t have to worry about it getting stolen.” Like many of you, Sheldon said he loves his bike both for its utility and the social aspect. He uses it as a roll-cart (see photo above) and to haul giant bags of cans to the bottle drop. It helps him get around much quicker than walking or the streetcar. One of his favorite things about bikes is how they give he and his friends something to talk about. “It’s a common interest of people out here. We’ll trade parts to keep them running. There’s a whole barter system.”

Here are a few of the other folks who caught my eye:

thanks. I always look through these for myself and people I might know. I hope leopard jacket gal isn’t flipping us off … but she might be

I really appreciate this series. The person carrying the toilet person was such a delight to come across. Also love that leopard print jacket!

Hey Jonathan…I know the shared photos are just the exciting samples….so any thoughts on the ad hoc trends your saw for a weekend: proportion of bikeshare vs private bikes, freight bikes vs typical, etc.

So many people seeking to influence the conversation around transportation have tried to capitalize off of the perception that biking is the domain of lycra clad, affluent, white men. This idea has never agreed with the reality of what I see everyday on my commute and on the street outside of my house and in my neighborhood.

People tend to cast their opposition to fit the argument they are making at the time. I have the feeling that most Americans think that walking and cycling is for people who can’t afford to drive, but they won’t hesitate to cast cyclists as elitists when parking on their street is threatened.

Bicycling is a sport that most bike owners practice twice per year by driving with their bikes on a rack to their local state park, biking a mile or two, which is about as far as they can handle. Real people drive cars.

Or so they say here in bucolic North Carolina. I have to visit Charlotte or DC just to see serious bicycle commuters in large numbers; everywhere else it’s just a few students, mamils, and visitors on bike share, even in our university towns.

I hear you soren. Keep in mind that official PBOT bike counts put feminine-appearing people at around 35% of the total people cycling…. so the very unscientific representation in this post is actually close to an accurate representation. FWIW.

Soren, is this a real concern or some of that old classic BP snark? Isn’t it just good to see HUMANS on bicycles?

Wasn’t there a recent BPMonday article that said if you want to permanently transform your community bicycling infrastructure (and thus raise your commute ratio), a majority of your riders need to be female? I’d say the high masculine ratio is symptomatic of Portland’s continuing decline as a national bike Mecca.

There was never a “lockdown”. There was however a massive experiment in groupthink. The pandemic has been over for months. It’s too bad bike Portland continued the charade. Get out and live. Too bad America has wasted so much time with Oregon leading the way.

No, that’s all false.

Nearly a million Americans dead, and your concern is wasted time. If the infection/death rate in the US matched the levels we saw in Multnomah County, over 500,000 additional Americans would still be alive today.

People are still dying (mostly unvaccinated) every day, although not nearly at the rates we saw before. I’m not sure where you have been, but most activities are now open and available again.

Many if not all of the deaths are senior citizens. Yes, nearly a million old people have died. Old people will continue to die every year. The common flu has been killing old folks since it came around and that’s not going to change. Mother nature keeps trying to thin the herd a little, but we fight her every step of the way with masks, face shields, shutting down the economy, and putting money in the pockets of big pharma. Grampa, it was nice knowin’ ya, but we got open up shop again