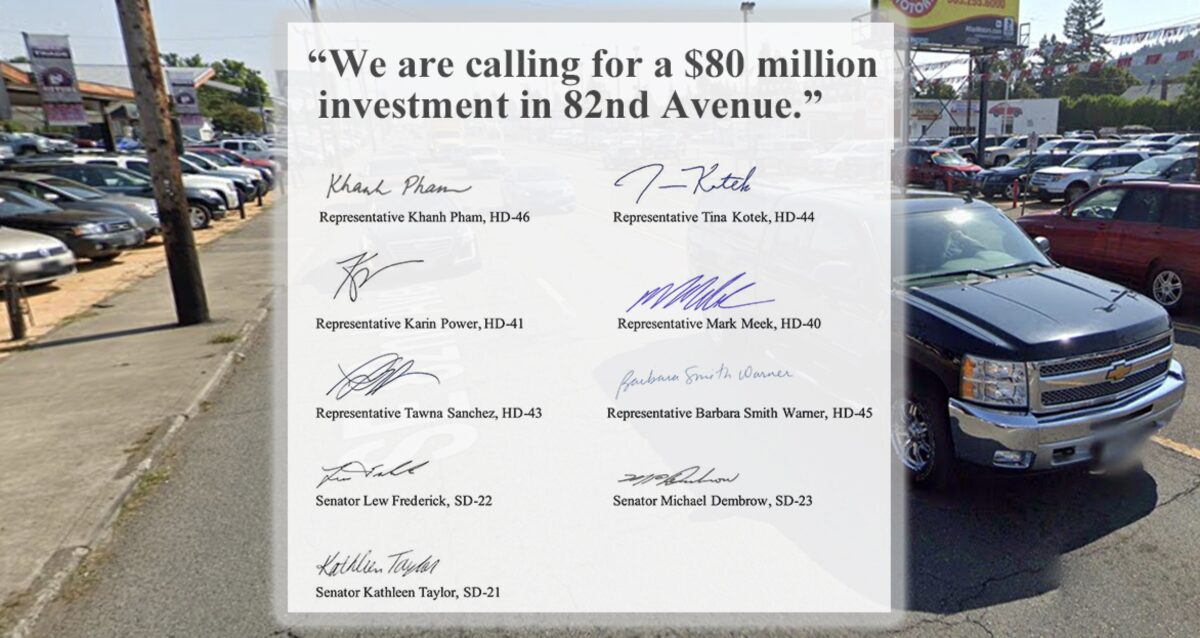 Nine Oregon lawmakers are making a new push to fund safety updates on 82nd Avenue. As first reported by The Oregonian yesterday, they are asking for $80 million to fund, “urgently needed safety improvements.”

The request was made in a letter (PDF) to co-chairs of the Joint Ways & Means Subcommittee on Capital Construction, a powerful group of lawmakers that will decide how to spend $780 million in federal rescue plan dollars.

The inclusion of House Speaker Kotek, who’s also a member of the Ways & Means Committee, could help the request cut through the noise. Also of note is how four of the nine lawmakers are members of the Black Indigenous and People of Color Caucus.

“While the state continues to delay meeting its responsibility for the safety needs of the corridor. People are being injured and hurt on a regular basis.”

The letter comes after another spate of deaths and years of lawmakers, advocates and community leaders begging the Oregon Department of Transportation to make 82nd Avenue safer. Last month, rookie House Rep Khanh Pham, who lives next to the orphan highway, called for emergency interventions and $100 million in funding to hasten jurisdictional transfer of the road from Oregon to Portland. On May 7th, Pham joined other elected officials and advocates at a virtual rally to draw attention to safety shortcomings.

In the letter this week, this new coalition said a recent $3 million funding commitment from ODOT is “embarrassingly inadequate to meet urgent safety needs.”

“While the state continues to delay meeting its responsibility for the safety needs of the corridor,” states the letter. “People are being injured and hurt on a regular basis.”

The $80 million request would come out of the 2021-2023 budget, which the Ways & Means Committee is currently working on. It’s relatively late in the budget process for this push. Budget hearings were last month and all the decisions need to be made before the end of the 2021 legislative session on June 28th.

According to a budget framework released in March, $2.6 billion from the American Rescue Plan Act (ARPA) will be used to balance Oregon’s pandemic-ravaged budget and, “increase expenditures by $780 million for critical new programs and services.”

Could $80 million for 82nd Avenue be part of those expenditures?

In a statement made when the framework was released, Ways & Means committee member Betsy Johnson, a senator from Scappoose said, “Our document is sufficiently flexible to respond during budget negotiations.” And Senator Elizabeth Steiner Hayward (D-Beaverton) said, “It’s important to make investments to overcome disparities caused by systemic racism.”

A history of disinvestment in the 82nd Avenue corridor and the fact that it touches on some of Oregon’s most diverse census tracts could make it an attractive investment.

The nine lawmakers who signed the letter have not released a detailed list of projects to be funded with the $80 million, but the amount is likely based on planning work already done by ODOT’s 82nd Avenue of the Roses Implementation Plan (2018) and Metro’s Regional Framework for Highway Jurisdictional Transfer Study (2020). The total cost of upgrades needed to transfer the road are estimated to be $185 million.

Final decisions on the budget will be based “public input on needs and priorities” and on the June economic and revenue forecast which is due out today (5/19). Stay tuned for opportunities to weigh in. In the meantime it might be wise to check out the Ways & Means Committee roster and tell members what you think about funding for 82nd Avenue.

That figure came from an ODOT graphic shown at an open house for the 82nd Avenue of the Roses Implementation plan in late 2017. It’s on page 6 of this PDF.

Outer Powell is $130 million for 4.25 miles, so about $30 million/mile. This includes ripping up the whole roadway, replacing sewers, adding sidewalks, cycletracks, planting strips, water runoff ponds, center turn lanes, and some extra right of way, and not damaging an existing Bull Run aqueduct.

They’re talking full reconstruction, completely removing all the pavement and then replacing it with brand-new pavement, including all the base material underneath. Usually triggers utility relocations, stormwater upgrades, sometimes new curbs, etc. It’s extremely expensive, but it’s the only thing that truly brings it up to a state of good repair.

This street’s bus line is the busiest line in the city. Division is a close second. Perhaps a mutual investment from Tri-Met and ODOT would be more in line with the use of the facility and hasten a better design for 82nd Ave.
Regardless, like most other East Portland transportation facilities, expense always plays a role. I thought I remember after the 82nd Ave. study the total cost of rebuilding the entirety of 82nd Ave. was closer to $500 million.

Too bad they can’t do a light rail loop on 82nd and 122nd and use a $150+ million federal FTA Small Starts grant to help fund construction.

I would have rounded up to 82 million for 82nd ave – way better ring to it.

Vote Up2Vote Down  Reply
« Book Review: ‘Calling Bullshit’ will help you be a better advocate
The Thursday Night Ride survived Covid and is ready for summer »