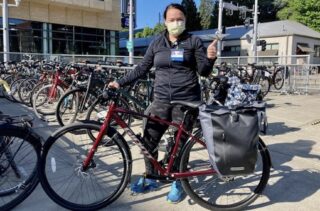 OHSU Program Manager Jenny Cadigan says there are about 20,000 commuters eligible. She estimates between April and September they’ll work with over 100 people in the loaner bike program.

OHSU has secured the fleet with the help of Sellwood Cycle Repair. The bikes are basic Giant hybrid models with flat bars and a set of high-quality (waterproof of course) pannier bags on the rear rack. Participants in the program also get a set of lights, a U-lock, a helmet and free repairs for the extent of the loan.

To sweeten the pot even further, OHSU announced today that any badge holder can take advantage of a $100 subsidy at Sellwood Cycle Repair (for non-motorized bikes) or a $200 subsidy at The E-Bike Store or Cynergy E-Bikes. Cadigan says OHSU will subsidize up to 100 non-electric bikes and 50 e-bikes per fiscal year.

Go By Bike owner Kiel Johnson helped get the program started. “It’s an exciting program and one that I hope more employers follow,” he shared with BikePortland yesterday. If you’re interested in setting up something similar at your organization, Johnson would be happy to help you get it off the ground. (Reach him via gobybikeshop@gmail.com.)

Johnson also sent me a photo of one of the first people to get hooked. Welcome to the bike lanes Natalie Martin!

CORRECTION: This article initially said e-bikes were available as part of the loaner program. That was incorrect. Sorry for any confusion.

The program hasn’t even been around for a month and we already have 15 of the 22 bikes checked out.

It’s a great idea. Looking forward to hearing how it goes from here.

Now we just need the tram to start early enough that I can make it to my shift without biking up the hill and risking getting mugged again!

Great news…way to go OHSU! [Any plans to add a bakfiets / cargo bike in the bike library?]