Wheeler, who celebrated the major Ritz Carlton development that displaced 55 businesses that made up Portland’s famous Alder Street Food Cart Pod, included $269,000 to develop a section of Southwest Ankeny into a new home for a few dozen of them. The project will partner with Friends of the Green Loop to create the first of three phases in their Culinary Corridor project.

“Many small businesses closed in 2020. Bringing them back – and creating space for new ones… is key to a successful, equitable recovery,” Wheeler said in a statement about his budget Thursday. “Funds for the Ankeny food cart project… will help advance this goal.”

The Alder Street carts were forced to shut down in 2019. There was a plan to relocate them to the North Park Blocks, but that didn’t move forward. 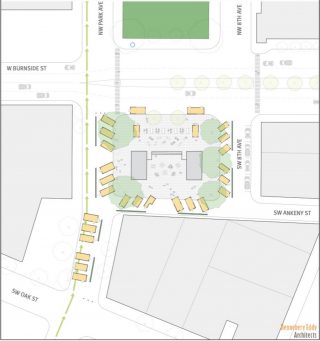 The new plan is to utilize a small park bordered by Burnside, Ankeny, 8th and Park. Friends of the Green Loop says the space will have room for 26 carts since the Portland Bureau of Transportation will make three of the four streets (excluding the largest one, Burnside) carfree. “The food carts combined with the park creates an exciting opportunity to create a unique place on the Green Loop that we can enhance with event programming and outdoor seating,” says a description of the project at the Friends of the Green Loop website.

Another benefit to this location is that it could lead to a more robust crossing of Burnside, which would create a stronger link to the North Park Blocks for bikers, walkers, and other non-drivers.

The new carts could be open as soon as July.

If this project comes to pass (and with money in the bank it seems likely), it could increase pressure on PBOT to create an even better plaza one block over at SW Broadway. The vast expanse of pavement at the intersection of Ankeny, Broadway and Burnside, is just begging to become a low-car/carfree plaza. New bike lanes installed late last year took one small step forward; but the intersection deserves more than just paint and plastic posts — especially once the new Ankeny West food cart pod becomes a major destination and people need more room to relax and enjoy the city.

Cool! I’d be happy for them to just block Ankeny at SW Broadway and make that whole area available for seating too. Would be great for whatever business comes to Bailey’s next (hopefully another tap room).

Good! Now make Park Avenue car free on one side and turn the park blocks into the premier biking corridor in the city.

It’d be a great way to preserve Portlands food carts while providing a low-stress car free bike corridor from PSU to the Post Office blocks. A bonus is that Park is already terrible to drive on in the first place.

Car free cart pod sounds cool.
But $ 269,000 seems like a lot when we can’t even catch 100 or so hoodlums dressed in black who are running around regularly terrorizing the city. Maybe we should adjust our priorities and focus our finances on safety for residents?

Yeah, why have we been paying cops to chase people around when we could spend that money on actual safety

Yes, but is that enough money? It’s only $2.28 million per chased hoodlum.

David, you live in Greensboro, NC right? No offense, but you aren’t impacted by slow 911 police response in Portland, OR. Public safety has changed in PDX for the worse since you were here. I now ride with a can of Mace and avoid the springwater corridor and I 205 paths. 🙁

I don’t think the poster mentioned anything about using the 269K for the PPB instead of a cart pod. But personally I do think that would be a good thing. Although many on this blog seem to be “anti police”, I’m not. I’m a life long Democrat but I want the police to show up promptly when I call 911.
I feel we need to fully fund the PPB so they can fill their vacancies.

I’ll never stay at a Ritz Carlton, but given our exploding city budget (and the migration of many high-earners to WA), the mayor had little choice but to juice the tax base by approving the hotel. Here’s hoping that the local businesses that have managed to survive the past year of lockdowns, unfettered camping, and property crime will get some extra bounce once the food carts are back and the hotel is operating.

Momo
Reply to  Mark in NoPo

Mayors don’t “approve” hotels, typically. They follow the zoning code, and they automatically get approved. Them’s the rules.

People’s lack of understanding of how developments get approved in this city never ceases to amaze me.

Ed
Reply to  Mark in NoPo

Where’s your evidence that there has been a migration of high-earners to WA? Just curious.

Chris I
Reply to  Ed

It must be a massive exodus, because Portland home prices were (checks notes) UP 10.6% in the past year…

Nice! Food carts are really one of the things that makes Portland feel like Portland. And this is a super logical place for a carfree plaza. Hopefully the remainder of Park south of Burnside can be eventually turned carfree and into a long row of food carts/vendors/etc too; wouldn’t it be nice if Portland eventually had something like the Pike Place Market!

You could have pro bicycle articles without anti-car sentiments all the time.

Did you read this article? Can you point out the anti-car sentiment in it? Because your comment on this article seems non-sensical to me.