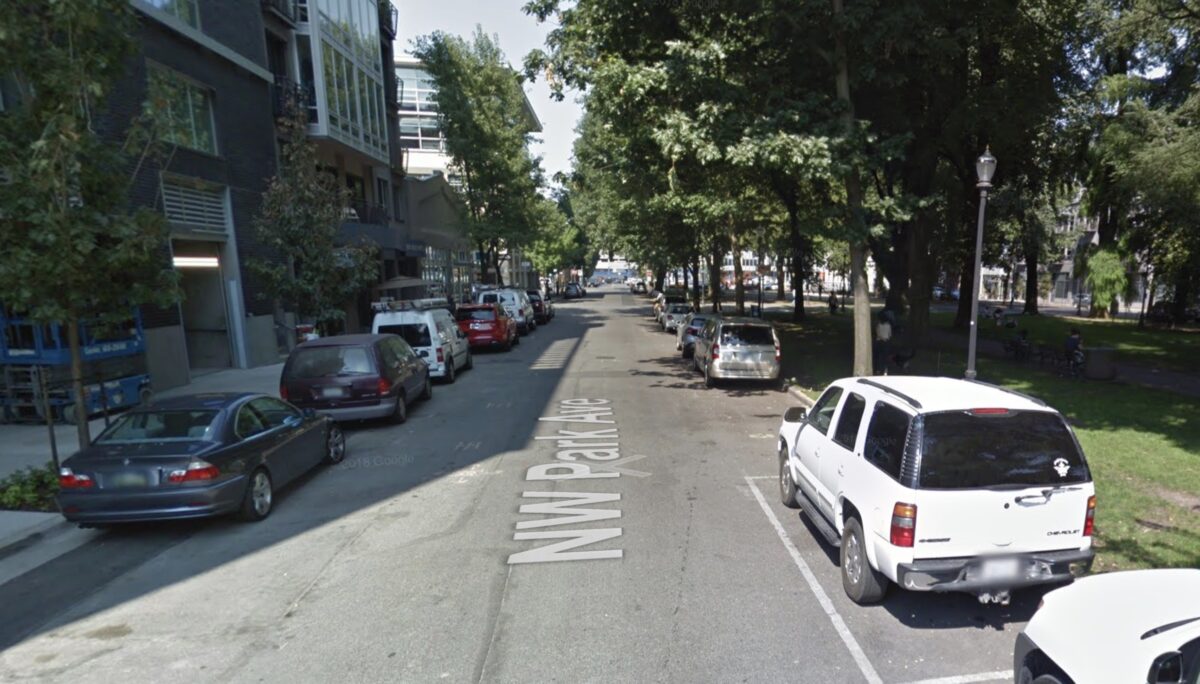 In case you hadn’t heard, Portland’s most famous food cart pod was recently evicted from its space on Southwest Alder Street to make way for a new hotel.

The Oregonian reported this morning that Commissioner Chloe Eudaly’s office wants to move the carts to the North Park Blocks:

Eudaly’s chief of staff, Marshall Runkel, said moving the carts to the blocks between West Burnside and Northwest Davis streets and Northwest Park and 8th avenues could bring new life to the under-used park space.

The move would “be a net positive” for the blocks said Runkel, who provided The Oregonian/OregonLive with mock-ups showing 37 carts may be relocated to streets around the park area.

The North Park Blocks would be the perfect spot for food carts*. The location is also along the future Green Loop route and The Oregonian reports that backers of that project are fully behind the cart pod idea. What makes Eudaly’s plan even more interesting is that it would utilize existing public right-of-way for the carts. Space currently used to park cars would be turned into seating areas where you could meet friends and eat great food from small, local businesses.

You might recall that when news first broke that the Alder Street carts would have to move, there was an effort to create a “Culinary Corridor” and place them on SW 9th Avenue. That plan hasn’t come together yet, so the North Park Blocks could be considered a temporary location until a more permanent place was found. 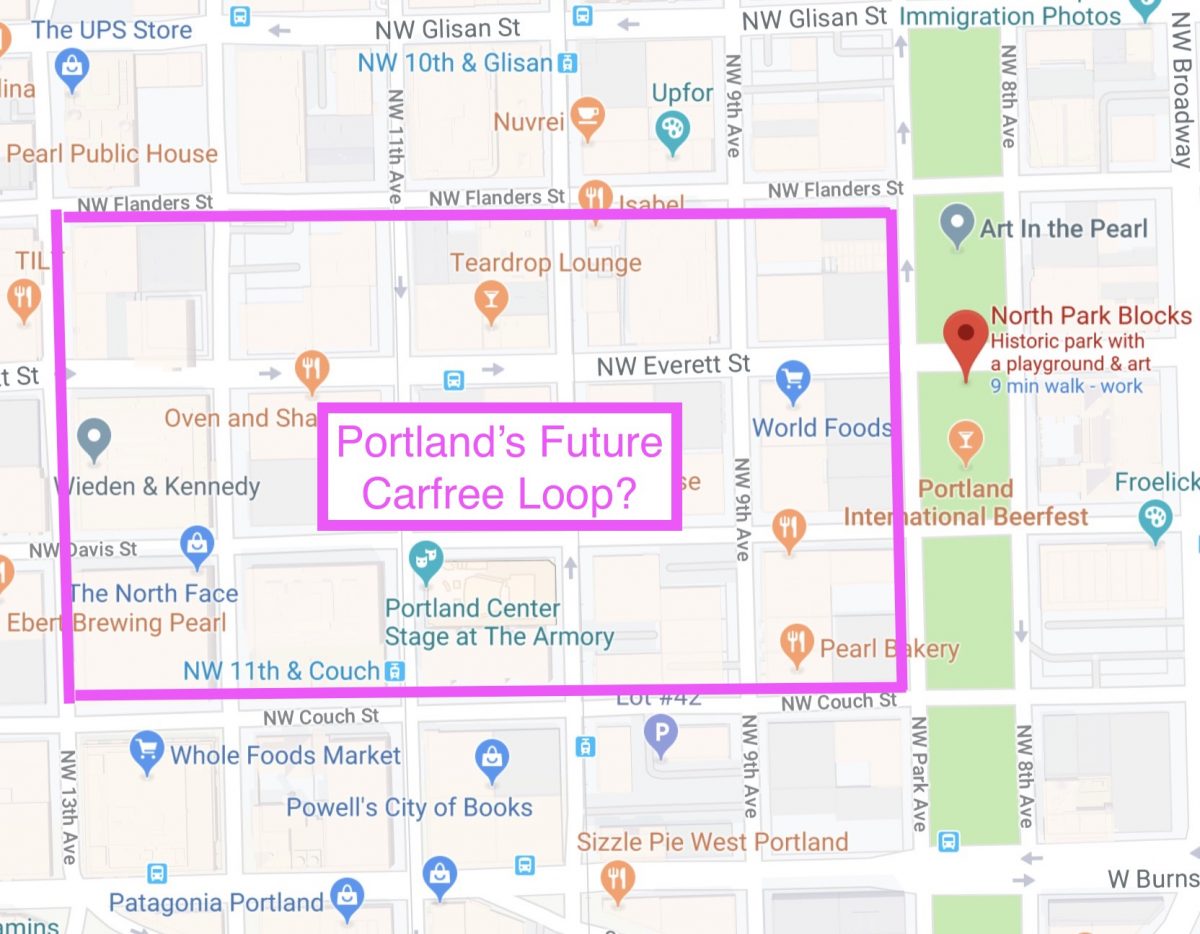 Why the hell not?

If these carts are reborn on the North Park Blocks, the City of Portland should seriously consider making the adjacent streets — NW 8th and NW Park — completely carfree. Imagine being able to stroll and roll on a wide park and plaza space in the heart of our city with such proximity to major destinations like Powell’s, the Pearl District, Brewery Blocks, Old Town/Chinatown, and so on.

There’s considerable support for carfree streets on city council right now (and there has been for many years). Commissioner Jo Ann Hardesty has said, “I believe in a Portland where you can get where you need to go without using a car.” Commissioner Eudaly didn’t even own a car for several years while in her twenties and has been a very outspoken critic of driving during her tenure as commissioner-in-charge of PBOT. Her bus-only lane project would remove hundreds of auto parking spaces and drastically reduce driving space throughout the city.

A carfree North Park Blocks could be another section of a future carfree loop in northwest. It’s only a matter of time before we prohibit driving on NW 13th. Then all we’d need to do is take the forthcoming major bikeway on NW Flanders one step further and then link those three streets with Couch and we’d have a world-class carfree promenade that would connect neighborhoods and re-vitalize our city.

Here’s to hoping. We’ll keep you posted on Eudaly’s plans.

*NOTE: After posting this, a reader on Facebook commented that he believes this is a, “Blatant attempt to get the unhoused out of that area.” I hadn’t considered that. It’s true that there are several important resources for homeless people around the North Park Blocks. It’s worth considering the impact Eudaly’s plan would have on them.

I like the idea of food carts along the North Park Blocks, but the devil is in the details. Mainly, where would the carts go? If they replace parked cars, they could become a solid wall, blocking views into and out of the park. If they replaced parking along the sidewalks, they would wall off the businesses and make the sidewalk an unpleasant canyon. I would be very strongly opposed to placing them in the park; I believe it would be giant step backwards to privatize and commercialize a historic public greenspace.

What would I do? I would place the carts along the park, replacing the parking spaces. I would create a pattern of 2 carts on each corner, and 2 carts in the center (6/block) with the space between for seating. This would have to be adjusted a bit to protect the trees from cut-through foot traffic.

I hope they move carts here, and I really hope they keep them park adjacent and not in the park.

I think you raise good points. I would add that carts on the corner could block visibility, so maybe we’d be better served with 2 or 3 carts in the middle of each block and none on the corners. I’m sure everyone here has had an unpleasant interaction with a motorist who noses most of the way into the intersection to check for traffic because their view is blocked by parked cars. Carts would make this even worse.

There’s also some room for a few carts in that one-block chunk of the Park Blocks that’s on the south side of Burnside. I believe that park even has bathrooms – could be a great spot for some carts.

They should just tear out the garage and existing park at the structurally deficient, closed and fenced-off O’Bryant Square and design a new multi-level covered pod and seating area there. It’s already effectively “de-houselessed” so wouldn’t evict even more people who lack shelter and resources and would be kitty-corner from the existing pods and not require crossing Burnside from the downtown areas that most existing customers come from.

Didn’t they just finish putting in a completely new playground there?

Keep the park open for everybody. Put the carts in the street.

Commenting on an article? Check this box first confirming
“I have read (or had some trusted agent read to me) the article I am commenting on”
COTW?

Yeah I’m sure you think you’re being clever, but I don’t need your snark. Thanks!

From a transportation standpoint the big issue is crossing Burnside, which has no signals Between 10th and Broadway. People downtown don’t cross Burnside because it balloons into six lanes of fast traffic, is poorly lit and lacks decent crossings. Without changes the carts are unlikely to attract the downtown lunch patrons they need. Burnside should serve the community not divide it. Start with 20 MPH, which is the statutory speed for a business district, and can be implemented tomorrow on a temporary basis. Then add lighting, and shortened, visible crossings.

The restaurant on the corner of NW 9th @ Couch literally was run out of business by people defecating on the sidewalk and using IV drugs on their front step. No one wants to view IV drug use while they sip coffee. Food carts would de-blight this area. Now whether the community does something for the residents that are displaced is another matter. Perhaps PDC funds should fund more low income housing than condos.

When the city puts in the power and water infrastructure, and being the city, does something idiotic like attempt to recoup lost meter fees; what are the chances that the site rental will be so high that entrees will finally hit the $15.00 mark?

High food prices resulting from outrageous site fees killed the Kenton pod at Nelson Plaza. (Sure is a fancy parking lot though.)

The first is something Portland does over and over, to the city’s detriment–viewing quiet open space as something that needs to be “energized” with development. These Park Blocks are important quiet, green areas. They don’t need the activity of a huge influx of food carts, and the food carts in off hours aren’t a great backdrop for the space. As the area grows more dense, the importance of quiet spaces in the city will grow.

The second is taking something–food carts in this case–that could transform something mundane–such as a parking lot–into something nice, and instead locating them at a space that doesn’t need them. Portland has a whole history of similar missed opportunities. Portland has a whole history of similar decisions–putting rec centers or memorials in natural areas, for instance–locating things to make nice areas nice in a different way, instead of using them to make mundane areas nice.

So it’s not that this can’t be a good idea, but maybe it should be seen as a temporary one, and long term that area of town should get a real plaza with food carts (instead of cars) surrounding it, or maybe the carts go here and some new quiet green space gets created nearby.