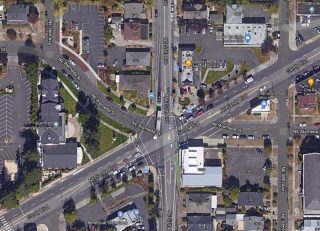 As part of their ongoing Rose Lane Project, the City of Portland wants to improve the speed and service of the 12 and 71 TriMet bus lines on Sandy Boulevard. One of the ways they plan to do that is to prohibit driving on a one-block stretch of NE Alameda Street.

If you’ve ever ridden across the intersection of NE 57th/Sandy/Alameda you know how awkward, stressful, and time-consuming it can be. The three streets come together in an asterisk star pattern that creates five unconventional intersections. The fact that 57th and Alameda are important streets in the bike network (the former having a bike lane, the latter being a neighborhood greenway), adds to the challenges of getting everything through safe and efficiently.

At a meeting the Bicycle Advisory Committee earlier this month, Portland Bureau of Transportation staff said one way they hope to make things simpler is to simply remove auto users from the equation at one of the intersections.

“This complex, five-leg intersection causes delay for everyone and helps facilitate cut-through traffic into the neighborhoods,” said April Bertelsen, a Rose Lane project manager. “We are proposing to remove the Alameda Street signal leg for motor vehicle traffic, and that would enable us to change the signal phasing and timing and give more green time to Sandy and 57th, which would reduce the delay for transit.”

The goal is to reduce the amount of drivers on Alameda so PBOT engineers can re-allocate signal phase timing toward other intersections.

Bertelsen added that since the diverter would require people to change their driving routes, some residents of the Rose City Park Neighborhood Association have expressed concerns. People who live on adjacent streets (like Stanton, Wistaria, 56th and 54th) also worry that the change will increase the volume of drivers on their streets.

To mitigate these concerns, PBOT will consider this change a pilot and will monitor traffic behaviors. If it goes well, the change would be permanent.

This is just one of 18 currently funded or in-progress Rose Lane projects. Learn more by checking the presentation PBOT shared at the April 13th meeting.

I hope this is the first of a number of diverters on Alameda, there is a surprising level of motor vehicle traffic that seems to use this neighborhood greenway to cut through all the way from Fremont to Sandy.

I’m really peeved at the current state of NE Klickitat and how it’s being used as a detour while construction is occurring on NE Fremont.

Diverters should’ve been installed at both ends to combat the excessive amount of auto traffic, and more troubling is that the drivers are already aggravated and aggressive. What’s the point of Greenways if we dont keep them mellow and safe for all modes?

What about the slip lane from Sandy on NE Alameda going East. People biking have to cross that lane to get to the push button.

I live right here and this area is already stupid to get to Sandy going eastbound or 57th southbound.

Drivers will either attempt to turn left off of 54th which is tough to cut across, or you need to get onto 57th, and hope that someone is kind enough to let you into that backup.

I cannot support this at all.

When the Churches were active this was already a disaster, so if this study is conducted without all that traffic, then the results wont at all match the reality of the expected long term traffic.

It sounds like the intention of this treatment is to make traffic flow more smoothly through this series of intersections. It sounds like PBOT understands that there are backups and they are trying to improve the situation. Do you think there is a better way to go about it, or do you just prefer the current status quo?

This may make traffic flow a little quicker east-west on sandy, but a slight improvement on the arterial is not at all worth the negative impacts to traffic currently using Alameda that will now use 57th, which is already overloaded.

The alternative traffic patterns for this traffic are ridiculous, and the local neighborhood streets are going to suffer livability.

Chris I
Reply to  Steve

The goal here is to reduce the backups on 57th. The backups here dump a ton of traffic onto local streets every day. The bike lane on 57th approaching Sandy is one of the most dangerous in the city, because people will jump out of line to go right into the neighborhood, often abruptly when they get pissed off after missing multiple light cycles.

The Vietnamese parish moved to a new facility out in the suburbs. So parking isn’t going to be a problem on Sundays anymore. New housing development on Alameda Ridge coming soon…?

I live in the area and use Alameda a ton on bike. I don’t feel like this is really a big priority. You have bike signal crossings that work fairly well.

On the flip side, the thing that really is not great is how traffic on 57th backs up for blocks on blocks on the N. side of Sandy blvd, then the drivers start to divert to the local streets. This causes speeding and irate people to blow through stop signs.

I feel like giving Alameda a one way entrance is indicative of PBOTs preference to keep affluent neighborhood streets calm while down at NE 62nd and Tillamook (Rose City Park) they removed stop signs next to a park that has a hefty amount of children and cyclists; so now cars can speed for about 4 loooong blocks at mismatched intersections with a bike greenway.

I’ve never been bothered by the time it takes to rotate through the five signal phases. But if one phase can be eliminated without causing a noticeable increase in traffic on nearby streets it is worth a try.

The issue I’ve always had with this intersection is when cycling westbound on Alameda you need to cross in front of cars turning onto Alameda eastbound from Sandy. This introduces a possible conflict, particularly when cars turn without signaling. While it won’t eliminate a signal phase, making Alameda westbound a one way just before Sandy would make this a safer intersection for cyclists.

Agree. I go through here on Alameda regularly, westbound and eastbound. My experience has always been that the most non-sensical and potentially dangerous part of biking through here is the requirement to cross the oncoming eastbound lane and enter a driveway in order to access the westbound bike signal button.

A reality of achieving Vision Zero is that you want car traffic to be congested as possible and to move as slow as possible at all times, but also allow the free flow of pedestrians, bicyclists, micro-mobility users, public transit, and emergency services. And if you want bike counts to go up, you also need to make car traffic worse, parking much more expensive, and actual speeds slower. In none of this story do I hear any concern about what is best for pedestrian movement or crossings, just cars, bikes, cars, cars, the odd bus, and of course cars. If transit is really a priority here or on Hawthorne at Chavez, then TriMet can be given the same signal transponders as emergency services already has. To increase congestion, I would suggest randomizing all signal phases at all signalized intersections, but have a signal phase whereby it’s red on all streets except for pedestrians (i.e. allow for a pedestrian scramble).

That would depend on how serious you really are about making public transit more convenient and efficient than car driving. Do you support everyone’s god-given right to burn fossil-fuels, park 2-ton pieces of steel everywhere, and drive infernal combustion engine vehicles everywhere; or are you concerned about climate change, giving people viable choices, and increasing transportation safety and efficiency?

Every TriMet bus already has Opticom! It’s the Transit Signal Priority system they use. It doesn’t work very well, but it’s what we have. However, state law doesn’t allow them to pre-empt the signal, just extend the green or shorten the red.

This does nothing for pedestrians at that intersection, and makes the local streets worse for everyone.

Totally agree. So disappointed. I live on other side of Sandy on Alameda. They have already made it difficult to get out of the neighborhood. But done nothing to stop the cars speed and that cut through going north & south. The only signal @ 62 doesn’t trip properly on the south side. It’s a long wait and short signal. Yes I’ve contacted them several times over last 15 yrs to fix it. North side is fine.
As pedestrian I avoid using the west crosswalk on 57th even after the improvements several yrs ago. Cars on 57th southbound turning west onto NE Sandy already ignore the no turn on red. Many others just don’t yield to pedestrians. Part of it is one cant see the pedestrians until after accelerating,

With Fremont currently blocked off for repaving there is a noticable increase in traffic with frustrated out of area drivers cutting through too fast, driving on wrong side of road and impatient with the pedestrians that we have to to extra careful.

Jonathan,
What’s up with the new comments format?

I’m not exactly sure what happened. We are looking into it. Thanks for letting me know.

Alameda should be a delightful and safe greenway from Going to 72nd, but the people driving make it too dangerous/stressful for many riders. This fix is OK, but it doesn’t seem to do much for people biking and walking. The improvements I would like to see: wider bike lanes on 57th (the existing ones are like 3′ wide!); stop signs for streets intersecting Alameda between 57th and Fremont- people driving just rip right through some of those intersections; and crossing improvements for bikes/peds at Alameda/NE33rd- people drive like total a$$holes on 33rd!