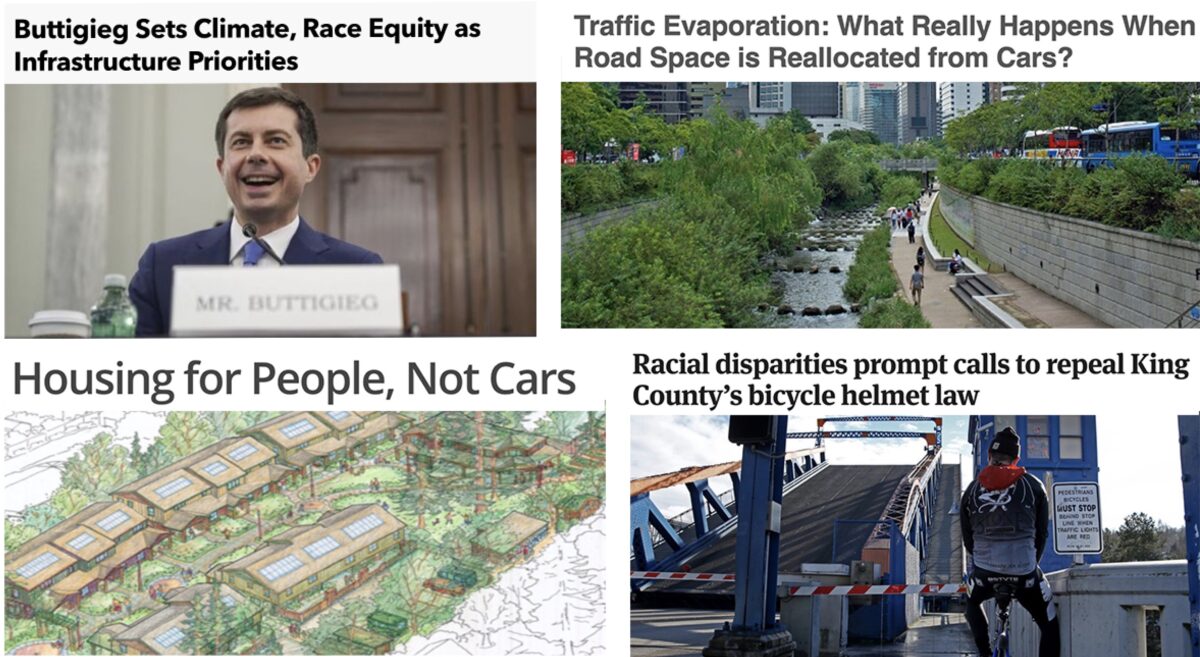 Happy Monday everyone. Lots to get to this week so let’s get things started.

Traffic creation: This interview with transportation researchers totally debunks the idea that wider freeways are a good response to traffic congestion concerns and it feels particularly relevant given ODOT’s expansion obsession.

Traffic evaporation: On the flip side, when space is taken away from drivers in dense central city areas, the result is nicer places with fewer cars and less driving, not the chaos DOTs often assume it will be.

Mobility lanes: I’m sharing this story not because of the lanes themselves (although it’s great news), but because they call them “mobility lanes” — not bike lanes. Should we stop using “bike lanes” once and for all in Portland? Would it help move projects forward?

$900 million up for grabs: The Biden Administration has announced the Infrastructure for Rebuilding America program that will fund transportation projects with an eye toward, “creating good paying jobs, boosting the economy, ensuring equity, and tackling our climate crisis.”

Self-charging helmet light: A new helmet from POC has a light that is charged by light thanks to a collab with a solar energy company.

Walking while Black: A Texas man was arrested and spent the night in jail. His crime? Walking in the street because snow blocked the sidewalk.

EVs won’t save us, part 3,156: “Liberation from car culture requires a more fundamental reimagining of how we get around, with investments in walkable and bike-able roadways,” says this NY Times opinion piece on the perils of technology as a savior.

Racism and helmets: Infraction data showing King County’s helmet law is enforced disproportionately against riders who are Black, homeless and/or Native American has prompted calls for its repeal.

War on Cars comes to Portland: Cully Green, a housing development just east of 42nd Street is the subject of the latest episode of the War on Cars podcast.

Idaho stopped: Lawmakers in Virginia who are fine with allowing people in cars to make right turns on red to accommodate traffic flow have decided that it’s just too dangerous for bike riders to do something similar with stop signs.

I don’t know whether the helmet law in question is good or bad, but maybe instead of repealing it wouldn’t this be a great opportunity for the police that enforce these laws get trained to enforce them with minimal bias? After all, if they are biasly enforcing this law, there’s likely many more laws that they do the same with and I don’t think all laws should just be written off the books.

For training to be effective, the trainee has to be willing to admit that it is necessary. From the sheer stubbornness and inability to admit fault on display from all levels of policing in America, I have no doubt that they laugh and roll their eyes through any anti-bias training they already receive. More training won’t help.

EV technology is essential to mitigation of transportation emissions in the long-term but, under any realistic scenario, it’s unlikely that EVs can be adopted at a high enough rate in the next 9 years to be consistent with a 1.5 C pathway.

I personally doubt that the USA is capable of addressing climate/biodiversity crises in any kind of serious manner by 2030 so these strident EV debates may be an example of how the “narcissism of small differences” can be used to avoid acknowledgment of the necessary transformative politics.

Localized pollution control addresses immediate health concerns, just as product warning “use in well ventilated areas”. Following this advise doesn’t affect emissions but limits health impact. The six pollutants (not CO2) due to urban transient camps is much more of a threat to everyone’s health, particularly those with respiratory issues, joggers and cyclists.

Well said by one who is comfortably housed.

Well, serve and protect. Maybe the Plano cops knew the heat was actually on at the jail so their work is done?

I don’t advocate biking intoxicated by the way, and have come to realize that I don’t even like being drunk…

We need to offer cops a better menu. ‘Our special today is a ride home, how about that?’

Well come on, how were the police to know that they weren’t supposed to arrest a man for walking down the street, this is obviously a training issue!

I love that the chief of Police backs his boys for arresting a man for walking while Black. Where are the “good cops” down in Plano PD denouncing their racist coworkers? Mysteriously silent.

Mobility Lanes: I’ve been using the term for a couple years now when dealing with my local DOT and they’ve been more willing to support buffered mobility lanes and are even designing protected mobility lanes for our new scooter and bike share vendor (Blue Duck), as well as all those other folks in spandex.

Did you see the Pearl Before Swine cartoon today (Mon Feb 22nd) listing who should receive vaccinations last? Pig and Rat settled on cyclists in Lycra.

Yes, the term “Mobility Lanes” (or similar) does avoid the word that seems to make the larger community freakout: “bicycle”…plus it also speaks to the current / impending diversity of vulnerable road users that use bike lanes…especially the newer protected lanes…which can serve many ADA wheelchair users (poor sidewalk conditions). The ADA angle is all too often under appreciated….by advocates and transportation engineers.