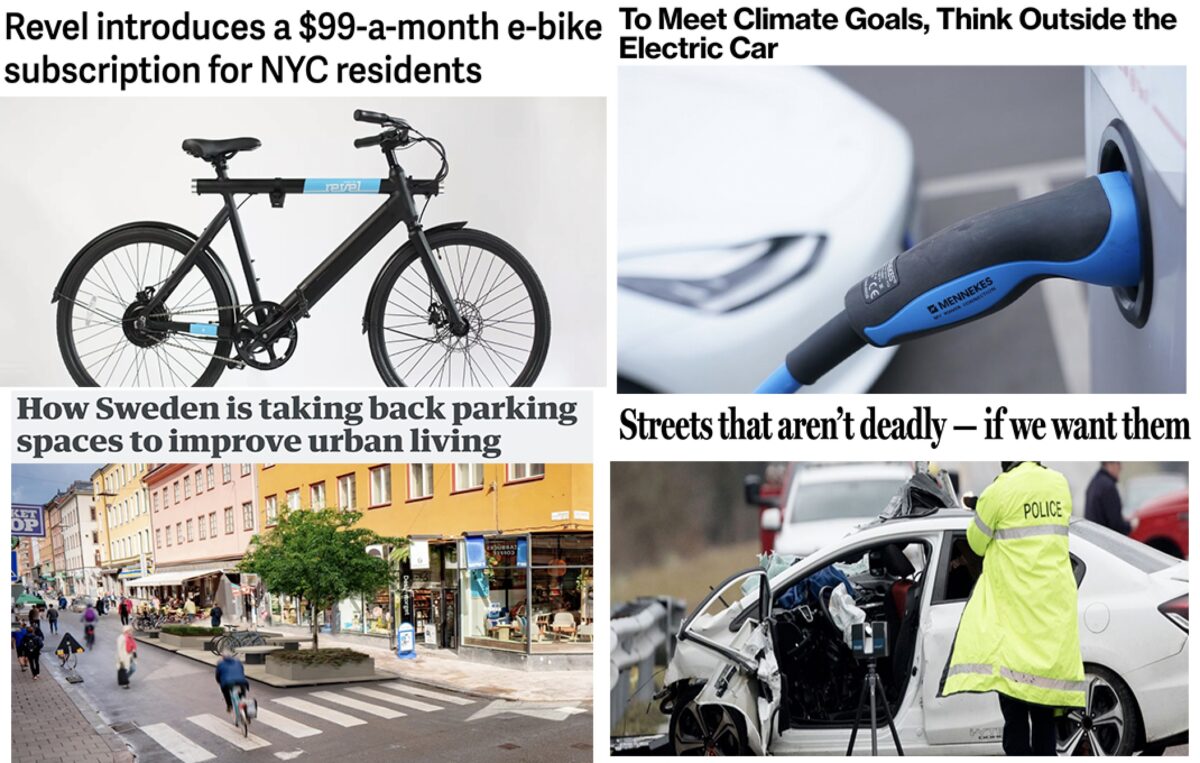 Welcome to the week everyone! Pretty wild weekend huh? Our hearts go out to friends who are still without power and/or who have gone through tough times due to the storm. Hang in there and let us know how/if we can help.

E-bike subscriptions: Revel, a company that began offering subscriptions to mopeds, has just expanded into e-bikes. The service is only available in NYC at the moment.

Funding reform in Maryland: In Oregon, The Street Trust wants to boost “Bike Bill” spending. In Baltimore, a coalition of advocacy groups has a bill that would force the state DOT to spend more on transit and basic maintenance, instead of new highways.

Traffic violence op-ed: Portland resident Michelle DuBarry pens a poignant and timely opinion piece in the Boston Globe appealing to the Biden Administration to be bold on road safety.

Low-car, “one-minute city”: Portland transportation leaders should watch what colleagues in Sweden are doing to reduce car use and use the right-of-way for more productive, healthy purposes.

Reduce driving or bust: As we debate federal transportation policy, two leading thinkers make a strong case that a switch to electric cars alone will not save us — we must do more to reduce driving overall.

Free e-bikes instead: Instead of rebates and tax incentives for EV-cars or EV-bikes, we’d love to see more programs like this one in Colorado that use funds from energy companies to offer free e-bikes to those in need.

Virginia goes Idaho: If all goes according to plan, Virginia would be the latest state to allow bicycle users to roll through stop signs when it’s safe.

Seattle streets revelation: Our friends to the north want to feel that warm, fuzzy, safe-streets vibe afforded by the snowstorm more often.

Tweet of the Week: Less than a week after Commissioner Jo Ann Hardesty and PBOT leadership decided against bike lanes on Hawthorne Blvd, Roger Geller, who has worked as PBOT Bicycle Coordinator for nearly three decades, has been posting on his personal Twitter account about the value of bike lanes on commercial streets. Coincidence? I think not:

I can't recall a single bicycling city that installed a bicycle lane on a commercial main street looking back and wishing they hadn't.

That’s one hell of a subtweet.

“Instead of rebates and tax incentives for EV-cars or EV-bikes, we’d love to see more programs like this one in Colorado that use funds from energy companies to offer free e-bikes to those in need”

Did this get posted when it first was published? https://newrepublic.com/article/160638/buy-everyone-electric-moped-climate-change

This is interesting but I find the graph that forms the basis of this article suspect. Why would the carbon output from the manufacture & disposal of a diesel car be so much higher than a regular car? Why is the maintenance contribution of all car categories about the same? How can plugin hybrids have less carbon output than electric cars?

The graph is not dated. It is stated in the article that the author saw it, “a year ago” but we don’t know when it was done and what years the data is based on. I suspect that this is based on old data which assumes much lower electric car lifetimes and much higher maintenance costs than is being realized even on older models. Electric cars will continue to improve on both of these metrics into the future.

But I want to make a larger point. This whole “debunking electric cars” take is tiresome. Of course, they have problems. Of course, just switching to electric cars is not going to “save us” but it’s a solution that we should be pursuing and with much more urgency than is currently allotted for this. For starters, we should abandon subsidies for fossil fuels! Not just for oil and not just for cars but for ALL FOSSIL FUELS. It is insane that we STILL continue to subsidize these industries. Any subsidies for green tech solutions are insignificant compared to this. Green tech solutions can now stand on their own feet commercially but we continue to favor fossil fuels through massive subsidies. Allowing these to continue is simply criminal at this point.

I’m not going to vouch for the scientific accuracy of the infographic, but they list their source in the image (and it is dated Nov 27, 2019: https://tnmt.com/infographics/carbon-emissions-by-transport-type/

And while the travelandmobility.tech graph looks like a more surface level tool, they do list their sources (not methods unfortunately) at the bottom of the image. Here’s one, Mobitool, and what I think is the relevant research: https://treeze.ch/projects/case-studies/mobility/mobitool

I agree, I wonder about the difference in emissions ascribed to the “Manufacture & Disposal” of diesel vs gas cars. I’ll have to look at the sources later.

But I think that is beside the point, the energy and emissions savings of moving more people around on 250lb electric mopeds/scooters/whatever is so much better than 5000lb electric cars, just from a physics standpoint. Electric cars are great vs ICE, but solving the climate crisis is going to take a more innovative approach than simply switching our current transportation infrastructure and mode share to electric power.

I agree that MANY different solutions should be applied to the problem of global warming and EV’s are just one solution. Yes, of course, we can benefit from moving around just ourselves rather than several ton pods with us but this would also require infrastructure changes to promote walking, biking, multimodal transportation and so on. I’m all for those changes as well per the MANY solutions approach. I personally prefer biking to walking but don’t mind walking if good public transportation is available. If I’m going to go somewhere or explore a wider area by myself, then I also prefer to do it on a motorcycle rather than in a car.