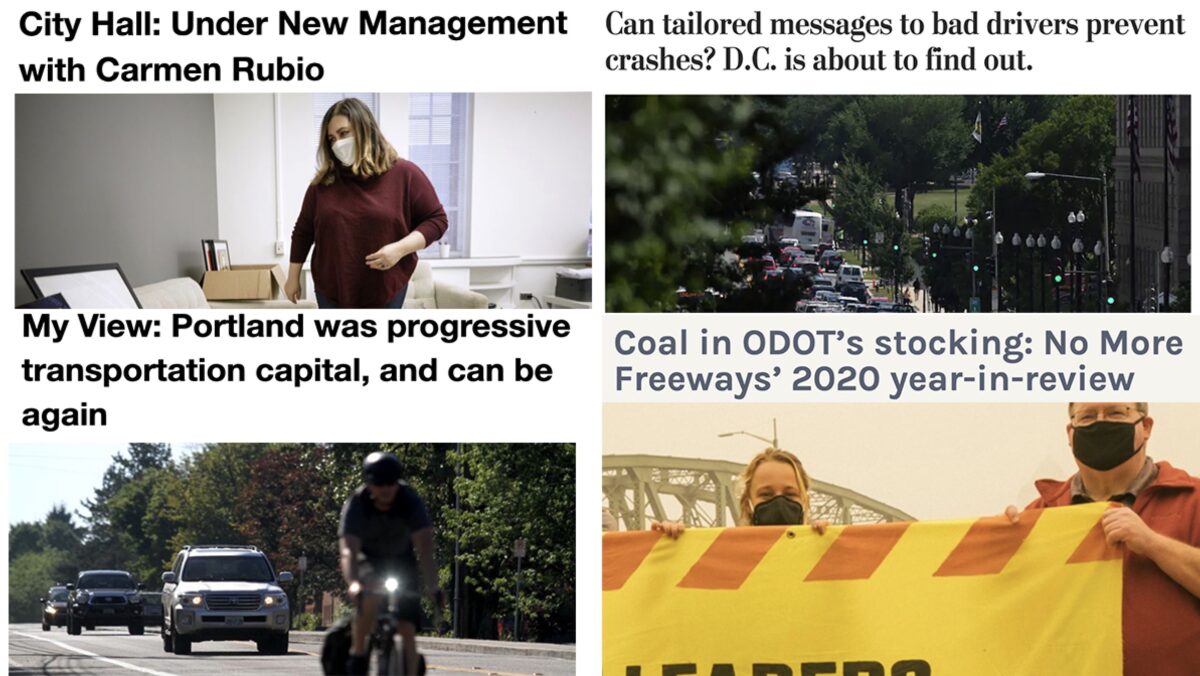 In keeping with tradition, let’s start off the new week of the new year by highlighting some important stories you might have missed over the break.

Before we share a few links, don’t miss the three stories we published last week: an introduction of new Portland Bureau of Transportation Commissioner Jo Ann Hardesty, an interview about traffic enforcement with legal expert and activist Scott Kocher, and our 2020 Year in Pictures.

ODOT lawsuit: In an email to supporters, the nonprofit No More Freeways said they plan to “sue the pants off” ODOT to challenge the agency’s federal environmental review of the I-5 Rose Quarter project.

Your new Parks Commissioner: Learn more about Carmen Rubio — who has been assigned the Portland Parks & Recreation bureau — in this profile from the Tribune.

Progressive proclamation: Portland resident Glenn Fee penned a guest column in the Tribune urging the state to take the $800 million planned for the I-5 Rose Quarter project and spend it on other projects throughout Portland.

Bike riders rampage: A video of a group of teenage bicycle riders in Manhattan thrashing cars in the middle of the street has gone viral.

Covid biking bubbles: Tokyo Olympic organizers say they will require athletes to quarantine prior to competition — a decision that might throw a major wrench in the racing plans of many pros given the dates of the Tour de France.

Getting personal: Washington D.C. city transportation officials plan to push text messages to high-risk drivers to warn them about risks of crashes. Seems worth a shot.

Yamhelas project setback: In a blow to rail-to-trail advocates, the Oregon Land Use Board ruled that Yamhill County, who owns the Yamhelas Westsider Trail right-of-way, failed to prove that the project would not force adjacent landowners to make major changes in farming practices.

Video of the Week: The Oregonian’s “Peak Northwest” show took an inside look at the Salmonberry Trail.

What happened to the other parks director? She was working in Staten Island. Is that a different role than the parks commissioner?

Each bureau has a director (staff person) and a commissioner-in-charge (elected official). Adena Long is Parks Director, Carmen Rubio is Parks Commissioner.

The Salmonberry is amazing. I’d love to volunteer to get this up and running ASAP.

When I hiked the rail line west of Beaver Slide before the washout there was an abandoned Willamette geared locomotive on a siding just west of a tunnel. It was covered with brambles and down trees, but otherwise intact. Always wondered how they got it out of there, and where it is now. Anybody know?

Not to the West. The tunnel at the N. fk of the Salmonberry is caved in.

Ah yes, the Portland Tribune and their annoying paywalls…

Who do they think they are, the New York Times?

The Trib continues to put their product out on the street for free, of course. Pretty handy when the park benches are wet.

If any story is protected by a paywall of any sort, I figure it’s probably not worth reading. Did you get anything out of it?

Not quite sure how this logic works – can you say more?

Here’s how it reads to me:

Stories put out and supported only by advertisers (i.e. no registration or paywalls) = worth money

Stories put out and supported by readers as well as advertisers = not worth money?

David! You sound like my family, and you’re probably right. Since I wrote it, I figured I can post the content. Nothing earth-shattering by any means – just wanted to add my voice in opposition to a poor idea.

As the Biden administration announces cabinet picks, it’s clear that addressing climate change and systemic inequities will be at the forefront of the new administration’s work. The hope that these cabinet picks bring for our climate makes it all the more striking that, despite intense opposition, the Oregon Department of Transportation has continued to plan I-5 expansion through the Rose Quarter. ODOT stubbornly clings to a 20th century solution to traffic congestion – highway widening – that multiple studies show does not decrease traffic. Expanding the interstate also promises to further exacerbate air pollution in the Albina neighborhood and to increase emissions that accelerate global climate change.

Portland was long looked to as an innovator in transportation for similar-sized cities, but that is no longer the case. By reversing course on this expansion and reallocating dollars, we have the opportunity to once again become a national leader in sustainable transportation, and to do so while working to address generational systemic inequities. Rather than spend $800 million on highway expansion, the state should invest in projects in the Portland area that have been proven to reduce congestion, and in programs that educate a diverse group of future leaders and elevate climate-neutral innovations. On the transportation side, we should add Bus Rapid Transit lines, particularly into East Multnomah County, and make our public transportation more efficient by expanding the Rose Lane Project. In 2018, the city identified 450 miles of streets suitable for protected bike lanes, but only a few miles have been built. Additional funds would help build significant miles of lanes, connecting East Portland neighborhoods to the urban core. Smaller grants can be applied to innovative solutions such as the Willamette River Ferry and E-Bike credits for low-income residents.

We can help address inequities by investing in new programs at Portland, Mt. Hood, and Clackamas Community Colleges. These programs would train students on techniques to make communities more climate resistant – home weatherization and energy efficiency; reforestation; sustainable transportation; renewable energy; and disaster preparedness. Upon completion of a certificate program, students would spend the next year in paid service with NGOs and local government organizations implementing what they learned. Upon completion of their service, these students will earn a stipend for additional education or to purchase a home in their community. These programs would serve as a model for other communities nationally, and build a core of climate and sustainability leaders who come from communities most likely to be impacted by the effects of climate change.

In its Vision Statement, the Albina Vision Trust imagines a future Albina neighborhood will be “seamlessly connected to the river and its surrounding neighborhoods.” Additional funds will help Albina Vision Trust and other community organizations to make the best decisions about the sustainable futures of their own neighborhoods. Granted, these proposals would mean a dramatic reallocation of how we spend our dollars at a state level. But it’s increasingly clear that we need dramatic action in order to fight the impacts of climate change and societal inequities. Rather than invest in a project that accelerates a transportation mode that has put our planet on the brink, we could address the impacts of climate change, reduce inequality, and develop a new generation of leaders with the knowledge to lead Portland and communities beyond.

Thanks for posting it Glenn!

As for paywalls, I think they’re problematic, but often necessary. Context matters and I weigh my judgment of them on a case-by-case basis. FWIW I’m someone who actually pays for sites I use a lot. I’m biased of course because I’m a publisher myself who relies on people paying for content so I can survive.

And if you disable javascript for that domain, of course, it reads like any other site without any interstitial. You can point out that it’s not a paywall* (not a paywall) til you are blue in the face, but it’s like anything else. They won’t listen to actual evidence and persist to post angrily on the internet. Ahh well.

You require me to possess far more knowledge of my internet browser that I actually have, alas. I have enough trouble just deleting old cookies.

I find the NY gang assault tragic considering it follows police weaponizing bicycles so much in 2020. I hope their behavior doesn’t become common. I’d like to know why they targeted that BMW of all vehicles.

I knew, as that was in the same article Jon linked. I’m curious about that, as well, but had forgotten about it when I made my comment due to my focus on what I saw as the more extensive time around and damage to the BMW.

Since there are lots of photos but no interviews of the “kids”, and that it is in a cheap tabloid, I’m assuming it’s sensationalist-journalism rather than the serious stuff. Even the whole incident looks contrived, as if everyone is acting and playing a part, except the police who aren’t there.

Since you ask: My awful local newspaper (for the comics of course, delivered daily at 1:30 am), the Economist and the New Yorker (both glossy weekly mags with heavily discounted subscription rates, I have never accessed them online), the BBC online, Bike Portland, RTE online (the Irish BBC equivalent), and BRAIN online (Bicycle Retailer And Industry News).

And you? Where and how do you get your news?

For news I can use, I’m happy to pay. I too look for the special offers but I understand that there’s no free lunch.

Any specific sites or providers you like and can recommend? I’m always looking for better.

The Atlantic is very good.

I don’t need a “serious journalist” to tell me what happened in a video I just watched with my own eyes.

Except when the video is doctored (edited, altered, falsified), like the many “deep fake” videos produced during the Trump years.

I have family in New York and am very worried about what is going on over there. de Blasio seems be from this new club of terrible mayors who have no control over their cities.

Or Amber Alerts from your local law enforcement agencies. Very ironic, isn’t it? It gives us some notion of how serious cities really are about Vision Zero.

I support the NMF lawsuit. I support the organized protests for hiring a diverse TriMet Director. Gratitude to all who showed up to fight ODOT and deliver the new STIP budget.

Really feels like we are starting to see the crack in daylight for cyclists and walking activists. And we did it collectively; every voice matters, every written testimony matters and every phone call you make in the next 6 months during the short legislative session MATTERS in Salem. Everybody can lead their own affinity group, support #BLM ands bikes! Thanks to the youth leaders for leading distributed solutions in social justice reform.

Up next! Let’s get a Big Bike Bill thru and get our 5% increase in funding. Mega Hooray everybody.