I know many of you would like to forget 2020 ever happened. But I’m of the persuasion that we’re always better in the future if we understand the past.

Yesterday on Twitter I shared what I felt were the most important BikePortland stories of 2020. I still might write a year-in-review post here on the Front Page because I think there’s a lot to be said about what happened in the past 360-or so days. Today however, I want to share some of the memorable images that help tell the story.

This image is almost hard to look at given our new aversion to close contact and germs. It was from a different time when Portlanders would build community through big group bike rides where the sole purpose was to socialize and meet new people.

Before the pandemic and protests gripped Portland, 2020 was poised to be the year bicycling finally came out of the shadows to take its rightful place atop the city’s transportation hierarchy. Scrappy, all-volunteer advocacy group Bike Loud PDX hosted a rally and 10th birthday party for the 2030 Bike Plan at City Hall on February 11th. Here’s to hoping we have more rallies in 2021.

Zoobomb’s Mini Bike Winter Chariot Wars showed that the creative and “free bike fun” vibes that defined Portland’s bike scene for the decade between 2005 and 2015 are still alive and kicking.

2020 was a banner year for local nonprofit Northwest Trail Alliance. The trail stewardship group opened the Rocky Point Recreation Area which is a trove of fun singletrack just south of Scappoose open only to NWTA members.

When the virus first hit, folks were scared and many just stayed home. It was surreal how empty the streets were — even on a Friday afternoon at this usually bustling section of Hawthorne Boulevard.

By late May, warm weather enticed Portlanders onto the streets on bikes and on foot in record numbers. I love the image because it shows the crowds on one of our best neighborhood greenways (N Going) and it shows how safe streets can be when people in cars are vastly outnumbered by people on bikes — especially tiny ones wearing flowery dresses.

The thing I’ll remember most about the local cycling boom is how many young children took to the streets. Aided by the City’s “Slow Streets” signs and barricades (thanks PBOT!), a few of those sunny days felt like spontaneous Sunday Parkways. It was wonderful.

2020 was a scary and thrilling roller-coaster ride for local bike shops. Employees and owners went from shock to out-of-stock, all while having to implement radical changes to keep people healthy. For e-bike sellers like this one, the boom was even more extreme as electric bikes sales skyrocketed.

Six days after a Minneapolis police officer killed George Floyd, I woke up to find our city covered in graffiti. It was the start of what would be several months of daily protests against racism and police brutality.

At every march and protest and rally I attended bikes and their people were everywhere. The ability of a bicycle to easily move through streets and large groups of people is part of what makes Portland such a protest-friendly city.

Bikes were also an essential part of crowd control. Volunteer groups came together to help move protests through the city and protect participants from other road users. 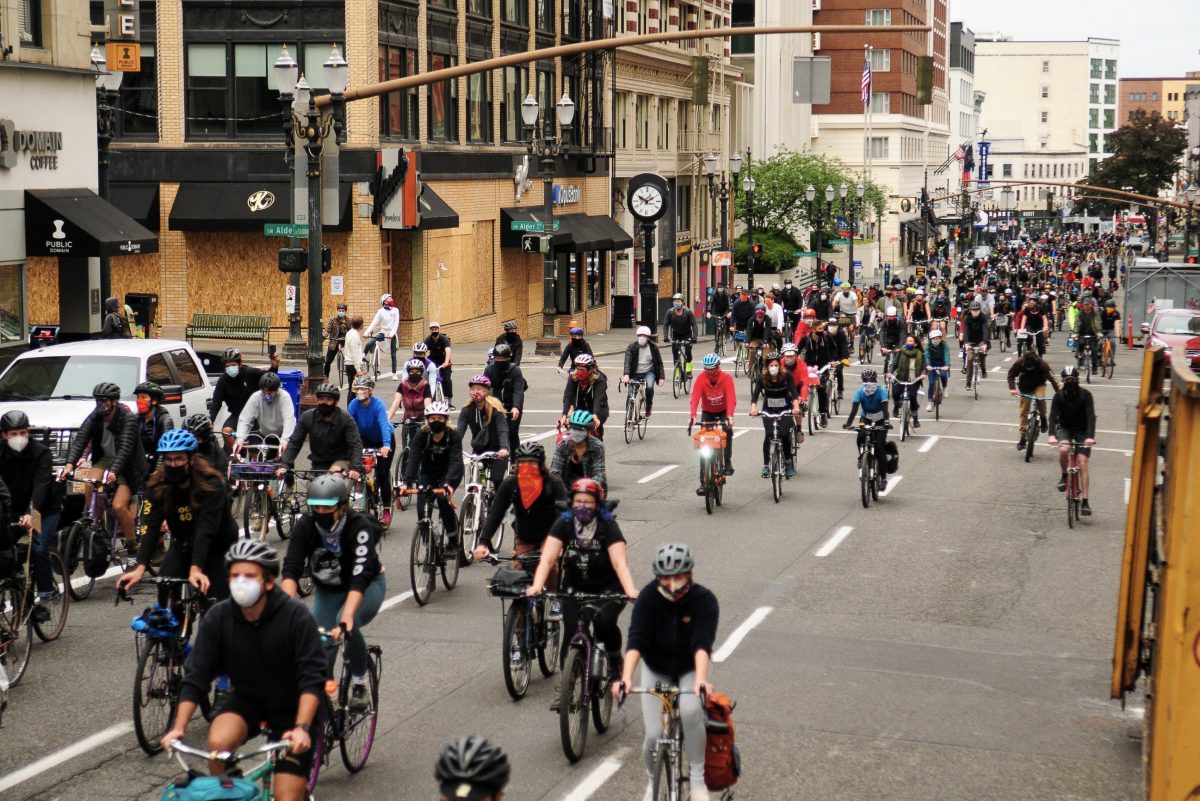 Portlanders of all types came together for the Black Girls Do Bike ride on June 10th. 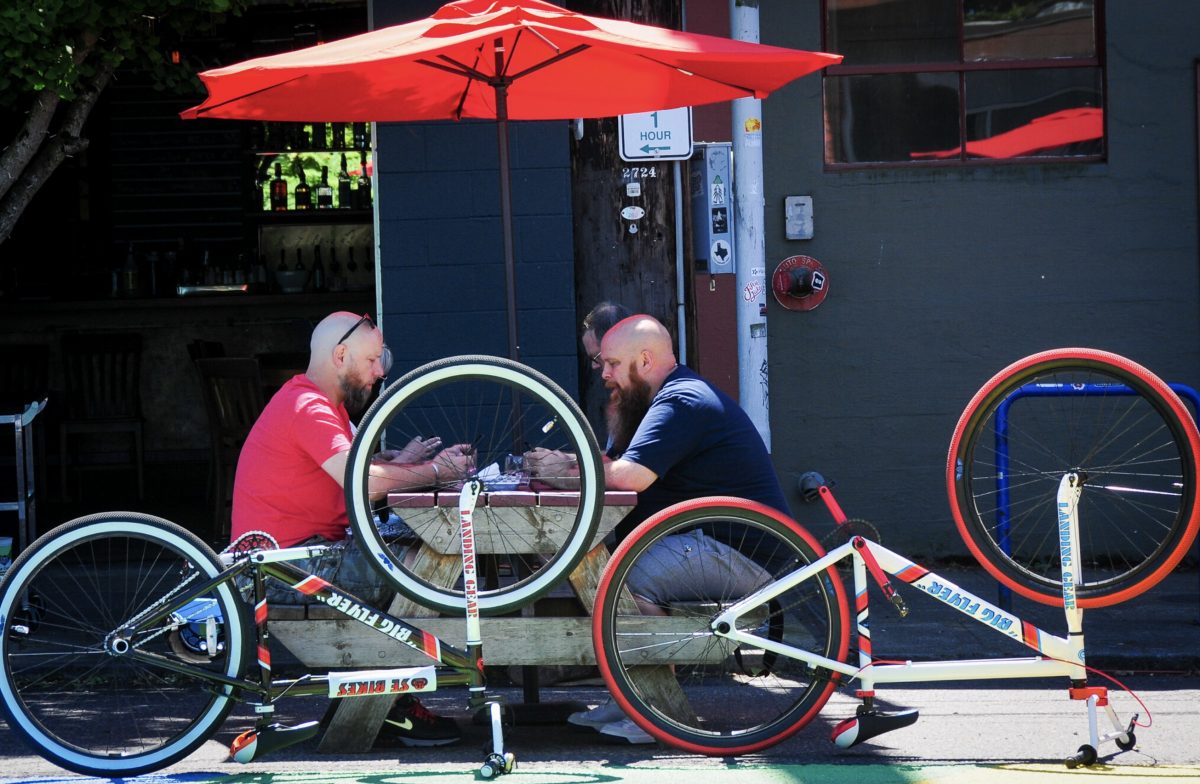 By late June, PBOT’s Healthy Business program was in full swing and carfree plazas full of folks eating outside bloomed throughout the city.

Wildfire smoke choked the city in early September, making it nearly impossible to ride at all.

Thankfully the smoke cleared and we were treated to beautiful fall colors.

The new Gideon Overcrossing just south of the SE 12th/Clinton MAX Station provides a great shortcut when trains block the street — and this stunning new view of the city we call home.

Here’s to more great views in 2021! Thanks for reading and commenting and supporting BikePortland in 2020. If you’ve appreciated our work (689 Front Page stories!), please consider leaving a tip or becoming a subscriber. We are 100% independent, have zero grants or big foundations behind us, and the majority of our revenue comes from readers just like you.

The Black Girls Do Bike ride was one of the single most joyful nights of the year. A beautiful evening all around. I hope they make this an annual event (where non-BIPOC supporters are invited to share the contagious joy and show up as allies).

It would be interesting to see a photo montage and map of all the places where pedestrians and bicyclists have died in 2020 in Portland, as a follow up.

That’s a good idea David. I definitely plan to do stuff like that soon. I’m just very conflicted about ending the year (however symbolic that is) on such a sad and tragic note.

Missing pictures of all the garbage. City of Garbage!

I liked the pic “West Burnside on May 30th” best.

These pics are historic. Also, ***Portion of comment deleted by moderator – Please don’t insult anyone. Thanks – Jonathan***.

Hi Jonathan, Thank you for putting together this photo-essay. Stph

Cheers, Jonathan! Thank you for your hard work in reporting on and advocating for bicycling in PDX.

Thanks for being a subscriber Hami! I really appreciate your support.

Brilliant! Thanks for this look back on the year. For me personally I realized that Portland is as fallible as any other city this year. We are at a crossroads-in twenty or thirty years I hope we can look back and say that we chose to care for each other and evolve with the times.

These pictures really tell the story of Portland in 2020, memories good and bad. Thanks for the thoughtful post.

I appreciate how you are evolving to more thoughtfully use photos in your storytelling. I know it is something you are very aware of and interested in. Passing along a big thumbs up.

Nice photo essay – thanks. The photos of people on bikes blocking cars still make me cringe, every time I see them.