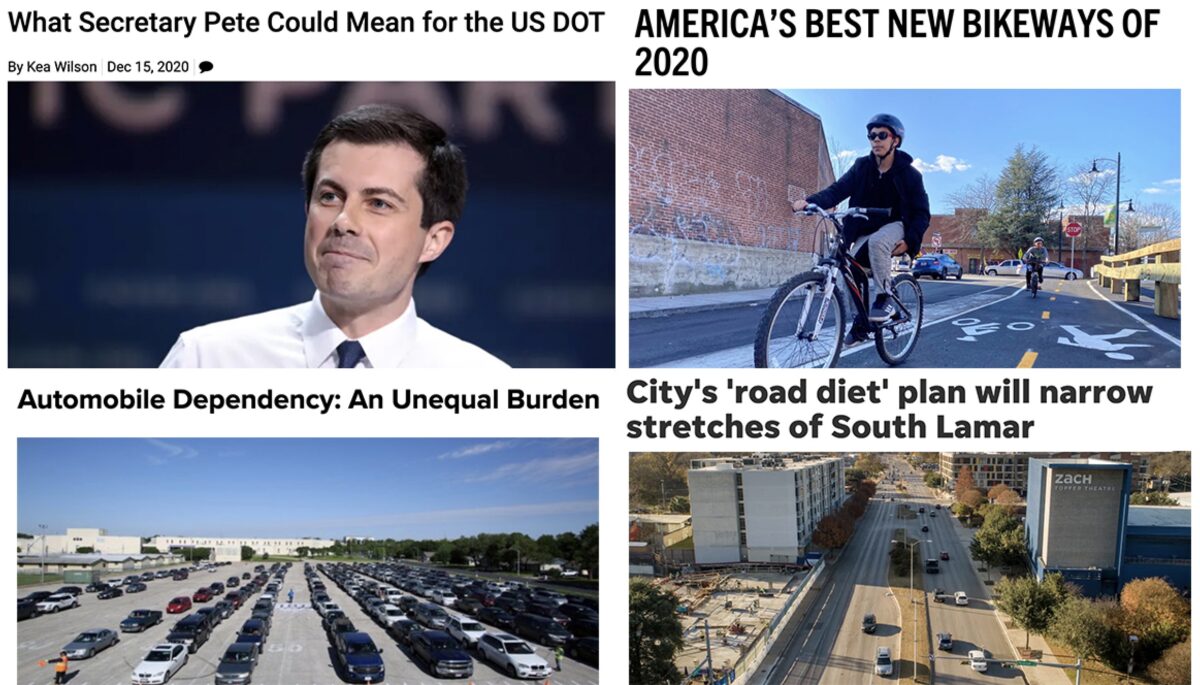 Welcome to the holiday week. BikePortland will be a bit quieter this week. We’ve still got stories to share, but don’t expect the regular output until next Monday.

This week’s Monday Roundup is brought to you by Cascadia Codex, who invites you to purchase a Digital Tree Token to help fight climate change and boost forest resiliency in Oregon.

Go Clara Go!: Portland resident Clara Honsinger continued her amazing march to the top of the cyclocross world with a jaw-dropping 2nd place at the UCI World Cup in Namur on Sunday. It’s considered the hardest course in Europe and Honsiger rode superbly to put the world on notice!

Where’s Portland?: Once again Portland has zero bikeways on the annual People for Bikes “10 Best New Bikeways” list. (The last – and only – time we appeared on this list was for the SW Multnomah bikeway in 2014.) (Note: Link goes to Google cache version since People for Bikes appears to have taken story down. Will update with new link if one is posted.)

Secretary Buttigieg: Biden’s pick for Transportation Secretary, former mayor and candidate for president Pete Buttigieg, could bring significant changes to the US DOT says Streetsblog. Politico (with very good transportation reporters) calls Buttigieg a “smooth talker” and points out that he won a “Smart Streets” award from Obama’s DOT while mayor of South Bend, Indiana.

No bike is safe: Thieves nabbed $160,000 in rare bikes from the lobby of Specialized headquarters in California.

Austin’s big diet: A major road through downtown Austin is poised for a reconfiguration that will include less space for driving and protected space for bicycling (among other things).

Helmet laws are bad: An analysis by Crosscut found that a large percentage of the (rather small overall) number of citations for not wearing a helmet were issued to houseless people.

Economics of car ownership: Transportation policymakers must take affordability of modes into account and stop assuming that lower-income people are better off with more access to driving.

Smarter policing: The City of Burlington, Vermont has shifted parking citation enforcement from police to a public works department that does now approaches the work from a “customer service” mindset.

Americans in the Netherlands: A Dutch expat news source shares the story of a retired U.S. couple that wanted to live in a place where bicycling was easy and normal.

Vision Zero perils: At a recent panel on policing and race in America, an activist shared an uncomfortable truth about Vision Zero: it hasn’t worked in the U.S. because a racist over-reliance on enforcement that puts Black and brown road users at risk.

Goodbye Mr. Kelsey: TriMet GM Doug Kelsey will retire in March after three years at the helm. This gives TriMet an opportunity to choose someone who will take the agency in a new direction.

There are always people who are ready to disagree with a President’s pick for a particular job: not this enough, not that enough. I don’t think the perfect candidate for any job exists.

Secretaries of Transportation guide policies rather than funnel money; it’s up to Senators to do the latter, and Mitch McConnell, the senior Senator from Kentucky and the de-facto leader of the Republican Party, is the reigning expert at that.

Even if Portland has plateaued on the bike infrastructure front, that list of 2020 bikeways makes me excited for the future of cycling in the US as a whole. So much good stuff there, and good to see other cities taking initiative.

I think ‘404’ is the predicted number of traffic deaths in Portland in the next five years.

Lets face it, Mayor Pete was not appointed to this position because anyone thinks he is a superstar in transportation. He is in the batting lineup for the next election and needed to have a visible post in the administration. With the potential meager post covid federal budgets, transportation policy won’t be much of a priority so transportation was an easy place to park the mayor and keep him out of the way of the establishment foreign policy, defense and banking machines.

I’ve never heard of an ex-Secretary of Transportation ever being elected President, so I suspect it’s a way to keep him permanently out of the way. On the other hand, I’ve heard it is among the most “fun” positions in the cabinet, depending on the appointee.

Matthew in PDX
Reply to  Bikeninja

Well, there’s never been an out LGBTI cabinet member either, so there’s always a first time.

I got the same thing. Bad link.

For some reason it looks like PFB took the story down. Here’s the Google cache version – https://webcache.googleusercontent.com/search?q=cache:MlS04e3PCGMJ:https://peopleforbikes.org/blog/americas-best-new-bikeways-2020/+&cd=1&hl=en&ct=clnk&gl=us

wouldn’t a ‘dutch ex-pat’ be a dutch person living outside the Netherlands?

Yes! In this case, though, I think the ‘Dutch’ in ‘Dutch expat news source’ is modifying the noun ‘news source’

So maybe it should read something like, “An Expat News Source based in the Netherlands”?

You are correct. The news service is based in the Netherlands and has a target audience of foreigners living there, ex-pats, which by definition none of whom are Dutch.

Reach the Netherlands’ largest audience of international workers and expats. DutchNews.nl has been serving the international community in the Netherlands since 2006, and now has over 700,000 monthly readers across all formats. Our readers come from all over the world. They work in IT, education and industry, for NGOs and financial service firms and they rely on clear, well-written news and information to help them get the most out of their lives in the Netherlands, now more than ever.

“America’s Best New Bikeways of 2020” was a bit disappointing to me. Not that the ones shown weren’t great functional improvements, and exciting in that regard, but they were for the most part one photo after another of a vehicle lane or parking area along the side of a street restriped for bikes, with some plastic wands.

Those types of projects are the most needed, so most projects SHOULD be that sort, so I have to give the list credit for focusing on those. Nevertheless–especially for an “America’s Best” list–it’d be nice to see a project or two that goes beyond that–somewhere you’d ride just for the sake of riding it, or somewhere that doesn’t give you the same route as the guy driving past you.

A project that banned vehicles from a major street in a major city would do that. So would a bikeway that incorporated say, an elevated path or bridge that created a new route not available to vehicles.

I too would love to see elevated bikeways that run independent of the grid instead of the usual bike paths along rivers and old railroads, or the usual protected and buffered bike lanes. Closing off major streets is something I associate with pedestrian cultures such as in Europe or Japan, but I agree such a move would transform our own cities.

But I think the main point of the examples given is to inspire government staff, rather than advocates, of other regional cities to do useful and low-cost solutions – if Pittsburgh can redo Penn Street, why can’t Philadelphia, Cincinnati or Cleveland? Memphis and New Orleans can inspire Atlanta, Jacksonville, Birmingham, Houston, or Charlotte. And they present projects from larger cities, not the platinum-costing projects from small college towns like Boulder, Eugene, Madison, or Athens, let alone the unique urban anomalies like NYC or DC.

Agree. I clicked to see bikeways and instead saw bike LANES. Only #4 appears to be an actual bikeway.