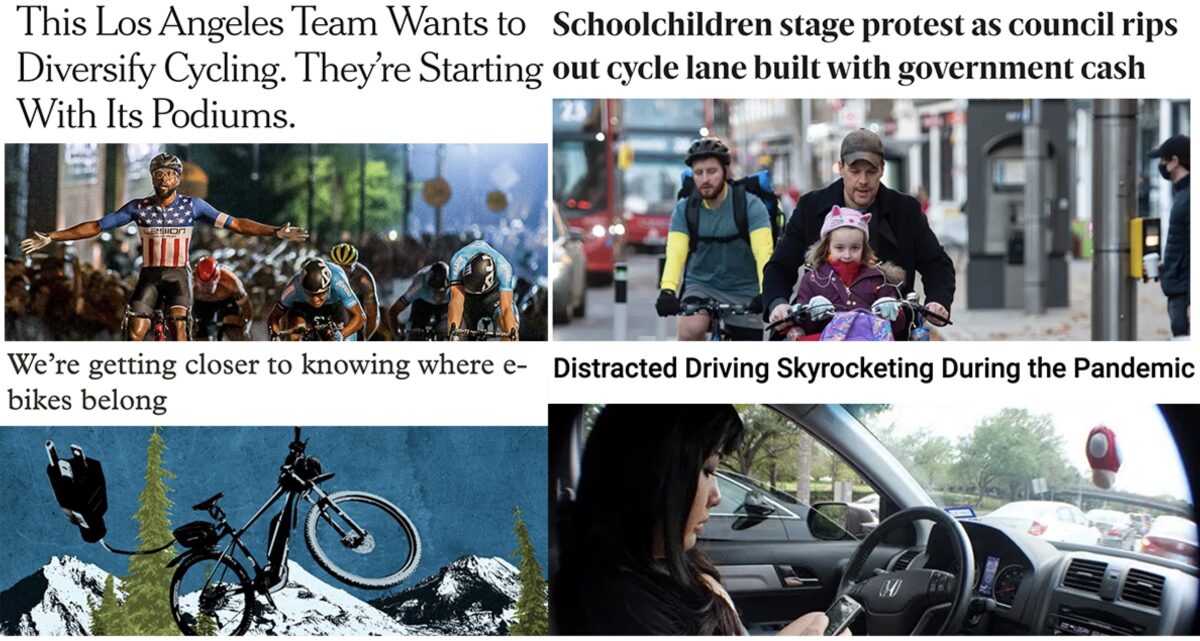 Blacker podiums: If you don’t know professional road racer Justin Williams yet, I recommend getting to know him and his work to get more Black people on bikes and onto race podiums.

Fight for you right (to safety): Londoners of all ages flocked to Kensington High Street for a bike ride and rally intended to convince politicians to not rip out a bike lane installed as part of a Covid-related pilot program.

Cars, the law, and you: Law professor Greg Shill stars in the latest “War on Cars” episode where he breaks down the legal underpinnings that make car culture in America so dang pervasive and powerful.

Tires kill salmon: A massive scientific breakthrough has found that a chemical produced when microplastics in rubber tires break down and get washed into rivers is to blame for the death of thousands of Coho salmon.

Ghost bikes 101: Everything you need to know about ghost bikes from someone who has been putting them up for over 15 years.

Tesla dangers: Slate takes a closer look at why the new Biden administration must do more to regulate Tesla’s “autopilot” feature if it wants to keep road users safe.

A kick out of cycling: Ben Foster is a Premier League footballer who loves cycling — so much so that he’s started a YouTube channel called the “The Cycling GK” and it’s full of good bike content, including riding to the game via train and Brompton folder!

Distracted much?: An analysis of cellular data records found that more than one in four drivers were using their phones less than 60-seconds prior to being involved in a collision.

Safe haven: It behooves active transportation advocates to understand the large intrinsic value people have for their cars — and how thanks to Covid-19 it’s at an all-time high.

Can I ride there?: With a rash of new federal and state regulations about electric bikes, this story from OPB helps explain how it impacts where you can ride.

Tweet of the Week: Amazing (and sad!) footage from ABC News of someone bicycling on Chicago’s Lakefront Trail on the shore of Lake Michigan…

Cycling in the United States pic.twitter.com/k6dCXEbQbm

I rode that stretch of the lake front trail in Chicago last summer, in much calmer weather, on a Divvy bike, and it was quite lovely. Few intersections, nice and wide, designated lanes for bikes and meds. It was a hot day and at one point I hopped off and went for a dip. Tough infrastructure in stormy conditions, though, for sure.

The guy in the video almost made it thru that section upright. It looked like a tough section on a cyclo-cross course.

I know a lady in her 70s who is a Michigander. The lake has risen to historic levels, nearly swallowing the piers at Grand Haven. Something tells me the Chicago cyclist is riding on a path that used to be well above the water line.

Very true. In 2013, Lake Michigan was pretty low. I joined a buddy for a couple of open water swims (with OpenWater Chicago) and getting to the ladders took some effort. A couple of high precipitation years in the Upper Midwest and Canada fixed that.

High precipitation years or melting glaciers around the world?

I grew up in Wisconsin on Lake Michigan and most of my family are still there, so I try to stay informed when they send me photos of the boardwalk under water. This is a quick Q and A…. https://greatlakes.org/2020/04/water-levels-questions-answers/

Apparently the blog author doesn’t know that Quebec doesn’t border the Great Lakes at all, but Ontario does (they are confusing the two provinces).

I wonder if the great lakes get tides? I heard the Caspian does.

Seems relevant to discuss Quebec if you’re talking about water in the Great Lakes, since it all flows out the St. Lawrence eventually.

They have a seiche, but true tides are masked by more local forces on the Great Lakes. https://oceanservice.noaa.gov/facts/gltides.html

Lake Michigan-Huron is not part of the world ocean (it’s over 500 ft above sea level, and has an outlet), so melting glaciers should not affect its water level.

Where does rain come from? The ocean.

Yeah… I might have gotten over committed there. Hehh.

Climate change will have an effect on the Great Lakes in may different ways. One of the drivers of climate change is the loss of high albedo ice/snow for more absorptive water, soil or vegetation. It doesn’t matter that the Great lakes are above sea level, they will still experience changes due to glacial melt and the loss of sea ice.
https://en.wikipedia.org/wiki/Ice%E2%80%93albedo_feedback#:~:text=Ice%E2%80%93albedo%20feedback%20is%20a,is%20reflected%20back%20to%20space.

No doubt that Great Lakes shorelines fluctuate from climate influences, but not from glacier melt directly. There are no glaciers in the Great Lakes Basin (watershed).

“High precipitation years or melting glaciers around the world?” was the question. They didn’t say glaciers in the watershed, rather melting glaciers globally and indirectly affecting the levels. So to the initial question, it’s kinda both. Increased local precipitation due to climate change which is driven in part by the loss of “glaciers around the world”.

Yeah, I agree with you (and not just local increases but local decreases too, and deviations in how much precip is dumped at once, and when, and more). I was more addressing Jason’s question which sounded a bit “either/or” to me, and we can safely rule out one of those possibilities, at least direct runoff. 🙂

It’s way above sea level. Fun fact: they had to dig a canal to discharge human waste, because they were polluting their own water supply!

tires kill salmon- this makes me think we need to start taxing vehicles by weight and miles driven. Could this be done at the time of registration? Or make DEQ inspection statewide and charge then?

A more direct solution would be to stop using the offending chemical in tire production.

Of course, one solution does not preclude the other.

I like the “tips” going around the media on how to help:

So no Walmart parking lot donuts?

When the electric car revolution arrives, we should mandate that these battery buggies run on solid urethane or nylon tires like their mechanical cousins ,the electric forklift. I am sure this type of tire could be formulated to be much less toxic than the fast wearing rubberish ones used on cars now. Plus it would have the added benefit of reducing speeds considerably as such tires would be very rough above 15 miles per hour or so.

The same anti-oxidation product is used for bicycle tires so every ride we do damages the waterways and salmon. Bike tires are a lot smaller than car tires but I seem to go through bike tires a lot quicker than I go through automobile tires. I wonder how bad bike tires wear per mile compared to automobiles.

Schwalbe of Germany does a good job showing how fast its tires wear down and which models are most resistant. Apparently one can make tires less harmful and more wear resistant.

Car tires have over 100x the rubber of your standard bike tire. I think you can sleep okay on this one.

Lots of places charge by weight at the time of registration, makes a ton of sense particularly as a way to equalize the less revenue generated by the gas tax from electric vehicles.

The Williams brothers are doing great things. Unfortunately, it will probably still take quite awhile for the changes they’re trying to make to be noticeable across the sport, but they’re opening up a door that will hopefully allow many others to get through in the future.

I wonder about his approach. I raced for 20+ years and administered the sport in Oregon for several years. Most racers do not come from a commuter background. Most are competitive people who need a new outlet for their drive. They are frequently injured former runners (me) or come from other sports. Even after becoming racers, I knew few who used their bikes for anything other than training and racing. Over here in Bend, and when I lived in Eugene for 20 years, I rarely saw racers riding about town. So, the best approach might be to find weekend warriors from other sports, who need a new sport.

Safe Haven: great quote – “We need to be thinking about building the value of alternatives, not trying to call people irrational for valuing the car as it is now,” Moody said. “Because we’ve built urban environments and transportation systems that makes the car the rational choice for most U.S. residents.”

It doesn’t help that Fauci of the CDC has kept encouraging everyone to drive and most testing centers are car-only on access. I once heard a lecture in 2019 from a guy from CDC who pointed out that their chief complex is effectively only accessible by car – there is public bus service, but the sidewalks don’t connect and pedestrians have to walk in parking lots part of the time, while there’s no reliable bike route to there on the busy arterial stroads.