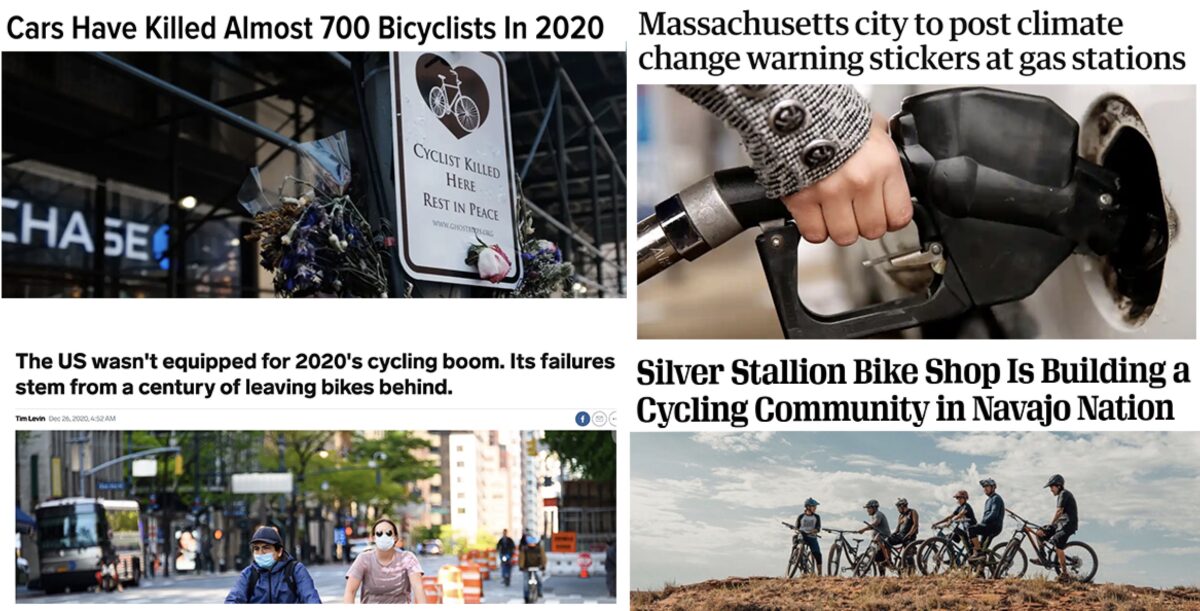 Welcome back (sort of). BikePortland is still in Holiday-mode, but since there were a few stories I wanted to address I popped back in to the office. And it just doesn’t feel right to start the week without a Monday Roundup, so here are the most notable items we came across in the past seven days…

Bike share lawsuit: Motivate/Lyft, the company behind Portland’s Biketown system, is being sued in New York on the basis of claims by CitiBike riders that front brakes caused crashes.

Another World Cup for Clara: Oregon’s own Clara Honsinger nabbed another 2nd place against the best riders in the world at the UCI Cyclocross World Cup.

Bike shop with a purpose: Members of the Navajo Nation in Arizona now have a place to buy and fix bikes thanks to the Silver Stallion Bike Shop.

Another fatal crash: A person was struck and killed by the driver of a car while walking on NE Halsey near 119th on December 23rd. They were the 55th person to die while using Portland roads this year.

2020 traffic toll: “There’s also a lot to be said for how our garbage infrastructure doesn’t value anyone not inside a car,” says this piece from car blog Jalopnik that dives into why nearly 700 bicycle riders were killed in 2020.

Unprotected again: The City of Boston moved to protect a bike lane with concrete curbs, only to remove them about a month later after officials said they caused too many drivers to crash.

From the ‘Unprotected’ article…
https://liveboston617.org/2020/12/16/dangerous-bike-lane-dividers-finally-dismantled-after-causing-multiple-roll-overs/

Regarding the removal of bike lane protection, I love how events that prove the necessity of protection are the very reason that the protection is being removed. This is peak irony.

Aaron, yes life in the street is perverse. It would have been more rigorous if the Boston PD had shared the crash reports and public works discussed the 100% removal with the local cyclist union / city bike committee before hand. But part of this may have been the professional “embarrassment’ of which raised protective element was authorized to be deployed*. This type of facility needs better protection than the all too often default flexible wand / delineator…but the raised “block” was likely a poor interim solution (see link).

There is almost 20 years of international experience designing this type of facility element with better off the shelf tools…to have made this poor feature choice at the approach to intersections, UNLESS* it was what was ‘on hand’ in the base yard and a fair attempt to get quick build action on the street during COVID19. [Better may have been a mix of jersey barriers with beveled wheel stops.]
https://www.universalhub.com/2020/never-mind-bollards-heres-concrete-barriers

I mean, it’s clear that what’s shown in the link (nice Sex Pistols reference) is massively inferior to what is done in the Netherlands, and even Denmark, so I’m very much open to improvements in design. Maybe even paint the barriers a bright color and add reflectors if a design overhaul isn’t feasible. But removal without replacement just seems, in your words, perverse.

Yep – when you make a change to a system, you have to consider the impact on *all* parts of the system. That’s what’s wrong with most decisions made to benefit cyclists, pedestrians, or motorists exclusively. We cyclists feel the impact of so many decisions made to benefit motorists exclusively, but it can work the other way also.

Hey Jonathon, do you know what the discrepancy is between your number (55th death this year) and the PPB number (57th death)? At the very end of the link you used: “This is the 52nd MCT callout of 2020 and the 57th fatality on Portland roadways for 2020.”

Huh, two deaths is a big deal, thanks for looking into it Jonathan!

Portland Police has a shared operation with Gresham in the Rockwood/Rosewood area – they may be counting some deaths in Gresham that Portland dealt with rather than by Gresham Police (or the County.) There’s also some isolated pockets of Multnomah County in SE, NW and SW that are not technically part of Portland but are covered by the city service area.

I found it ironic that the “2020 Bike Boom” piece was actually a retrospective look at the failures of the “bike boom — which began in the mid 2000s”. The piece is even more ironic given that Portland, like many cities, is in the midst of a bike bust.

This sounds like a familiar story–lots of bikes got sold but how many are being ridden?

The echo of the boom is still rattling around in the form of a serious shortage of replacement parts. Try to find a disk brake set and you’ll hear ‘maybe February?’