The Portland Bureau of Transportation is running a “Go By Greenways” contest where you ride neighborhood greenways and post a photo or video to social media for a chance to win one of five ORP “Smarthorns”. The ORP is a dual-tone bike horn with integrated LED light designed in Portland. Use the hashtag #GoByGreenways to automatically enter your photo or video in the contest.

BikePortland recently posted an article on the Neighborhood Greenways 2020 Status Report which covers both existing and future greenways. Looking over the report, I noticed that the Bryant, Holman, Simpson, 55th, and Alberta greenways could be strung together to form an 8.7 mile route across Portland from N Willamette Blvd all the way to the I-205 multi-use path. This route includes the new NE Simpson St greenway and the partially done NE 55th Ave greenway.

So that’s the route I followed to get my #GoByGreenways photos, starting at N Bryant St where it intersects N Willamette Blvd. You stay on this greenway for 2.5 miles which requires a detour down to N Dekum St to get across N Interstate Ave and reach the Bryant Street pedestrian bridge over I-5. The route then continues on what is now NE Bryant St until it ends near Woodlawn City Park. From there, sharrows guide you diagonally down NE Durham Ave to Holman City Park and the start of a 1.5 mile ride on the NE Holman greenway.

The Holman segment ends at Fernhill Park, looping around the East edge of the park to connect with the NE Simpson St greenway. You stay on this until reaching NE 55th Ave and turning South. The 55th Ave greenway is not yet complete, but the most important piece is – a signalized crossing at NE Killingsworth St. This is an offset crossing, so PBOT has built one-block dual direction bike lanes on both the North and South sides of Killingsworth to make getting across easier. BikePortland wrote about this important piece of infrastructure when it was built in 2017. You’re now on NE 54th, and a block South of this crossing there’s a hidden pedestrian path that gets you back on NE 55th through a grassy field. This grassy area will have a paved path when the greenway is complete.

Turning East onto NE Alberta, you’re now on the final greenway of the route. This stretch of NE Alberta is quiet residential streets in contrast to the busy commercial section further West. It’s also part of PBOT’s Safe Street Initiative to further discourage automobile use. The route briefly dips South one block to follow NE Wygant St and a path through the well-hidden Sacajawea Park before it resumes on Alberta. But that’s followed by a second dip to NE Wygant to get across NE 82nd Ave. Alberta has no crossing treatment for this busy avenue, but Wygant has a signed crosswalk with a center refuge. 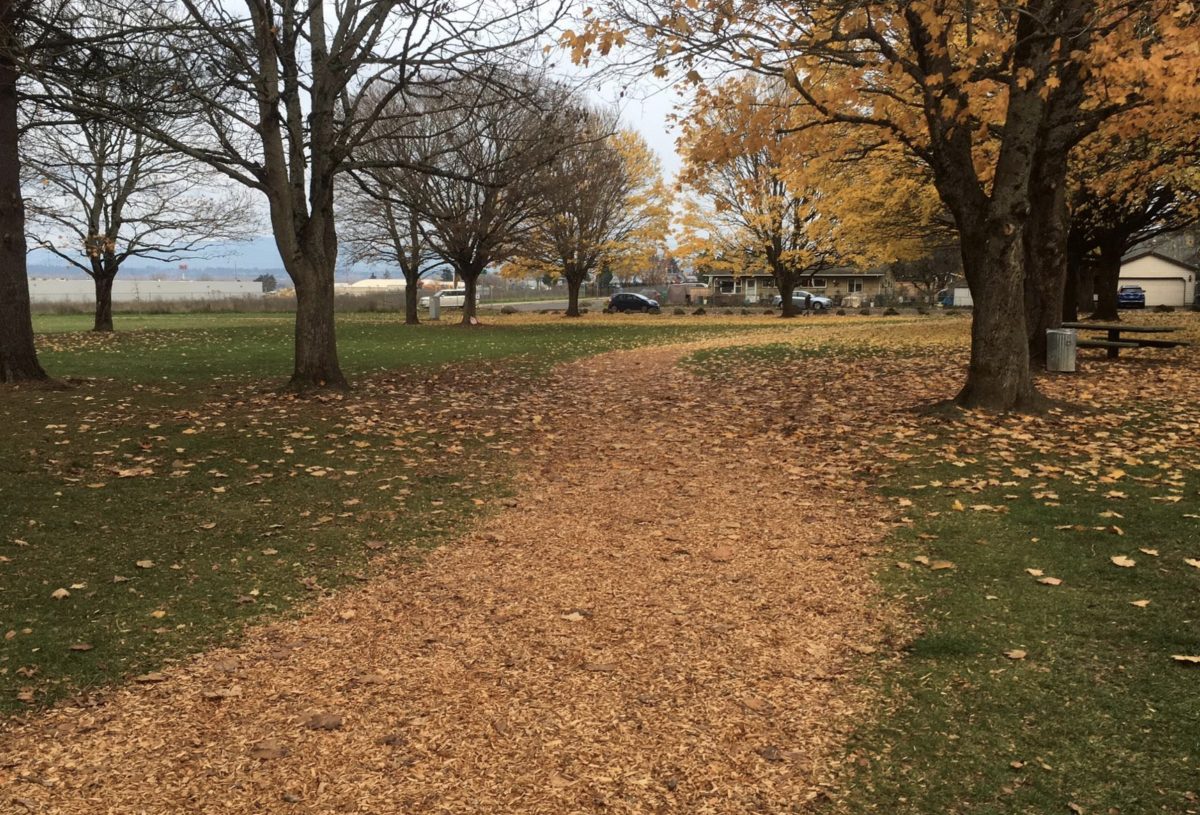 The route now winds through neighborhood streets to get on NE 91st Ave where it dead-ends at a cul-de-sac. There’s a pedestrian cut through here leading down to the sidewalk on NE Killingsworth St. You ride the sidewalk for a quarter mile to get over the freeway and reach the I-205 path using the pedestrian signals to cross the freeway ramps. Killingworth also has a bike lane, but it requires a rather unpleasant merger across a lane of freeway-bound traffic and lacks a curb cut to get on the I-205 path.

You may notice that the RideWithGPS map of this route defaults to the RWGPS mapping option. An advantage of using this mapping compared to the satellite or plain map options is that it reveals hidden features that aren’t on the other maps. For instance, this route uses four hidden pedestrian cut throughs that don’t even show up on the other maps.

So give this route a try if you like. By using that South sidewalk on Killingsworth, it works equally well riding East to West.

GoByGreenways.org says the contest is closed and it looks like it was a summer thing. Did they reboot it and fail to update their website?

Thought it went through the month. Oh well. Still a fun excuse for a ride and Tom is an excellent route guide.

This chance to win one of five ORP Smarthorns is still going on. PBOT sent a text message this month announcing it to participants in the earlier contest, and the ORP contest is also mentioned on PBOT’s Facebook page. As you surmised gobygreenways.org has not been updated since the zebra hunt contest concluded in early October.

I winced at all the leaves in the 42nd and Simpson picture. One thing SW does get right is they clean their streets.

I use this route regularly with one exception east of 82nd. You can continue north on 87th to Helensview school there’s a cut through path that leads to a Killingsworth crossing at a light. Ride the west side sidewalk around to a signal crossing of Columbia then turn left on 87th at Bike Tires Direct and follow it to a right on NE Marx, then left on 92nd a short distance to the Alderwood Trail which is a nice wooded MUP along the Columbia slough that connects to the I205 path. For those who wish to go north on I205 path this alternative avoids a narrowing of the MUP under the RR underpass caused by an extensive camp set up that overflows well into the path. Another advantage is you go by Bike Tires Direct/Western Bikeworks that might be a good stop after COVID. For connecting to the Marine Drive Path, I find this alternative much more stress free as it avoids the freeway entrance crossing as well as the camp blocking I205 path northbound.

Thanks for posting this northbound alternative to the I-205 path. There’s also an alternative for going south. You have to deal with NE Sandy Blvd, but it avoids the section of the I-205 path that goes under Sandy. On the regular route go south on NE 89th from Alberta for 2 blocks. Then go east on NE Wygant for one block, and south 2 blocks on NE 90th to Sandy. Ride the north Sandy Blvd sidewalk for one block to NE Prescott St and do a Copenhagen turn at the light to go east on Prescott. Right after Prescott goes over the freeway there’s a side path over to the I-205 path.

Thanks Tom for the article. Very informative for me as an East Portland resident who has the occasional need to get to North Portland. A route I’d never considered before. For cyclists around the city, know that there is always a route the local finds which you’ve never considered. Happy Thanksgiving 2020.

The grassy cut through has been paved, thus completing the NE 55th Ave Greenway from NE Lombard to NE Mason: