This guest post is by Tom Howe, the man behind the Puddlecycle ride series. His last post was about biking to the solar eclipse.

“If you had told me at that time that those tracks would one day be a bike path with 250,000 riders annually, I wouldn’t have believed it.”

The Salmonberry Trail is a project that will make use of a derelict rail line from the current end of the Banks-Vernonia Trail all the way to the Oregon coast. The trail has been in the planning stages for a long time, but if Virginia’s experience with the state’s 34-mile Creeper Trail is any indication, Oregon would do well to complete the Salmonberry sooner rather than later.

Back in the 1980s, the Virginia Creeper was itself an abandoned rail line that the US Forest Service decided to make into a recreation trail. Given the very rural nature of the area, this idea was met with some skepticism, but the trail has become wildly successful beyond anyone’s expectations. The trail holds special significance to me, as I once lived in Abingdon just a few blocks from the abandoned rail line. As neighborhood kids, we’d go over to the tracks and walk over the high trestles as a foolish/daring/scary thing to do. The only thing I ever saw on the tracks was a Drasine – a motorized vehicle about the size of an automobile.

If you had told me at that time that those tracks would one day be a bike path with 250,000 riders annually, I wouldn’t have believed it. That figure is over 25 times the combined populations of the two towns along the trail – Abingdon and Damascus. Trail-related tourism is estimated at $25 million per year, and each overnight visitor spends about $700 in the area. 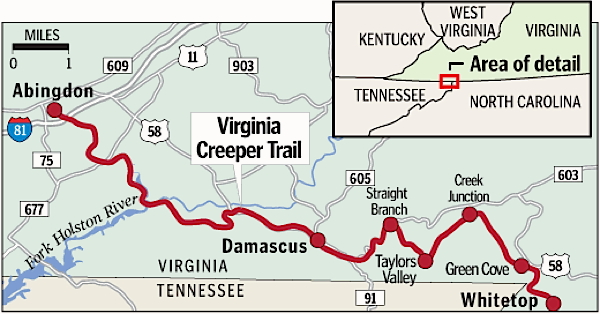 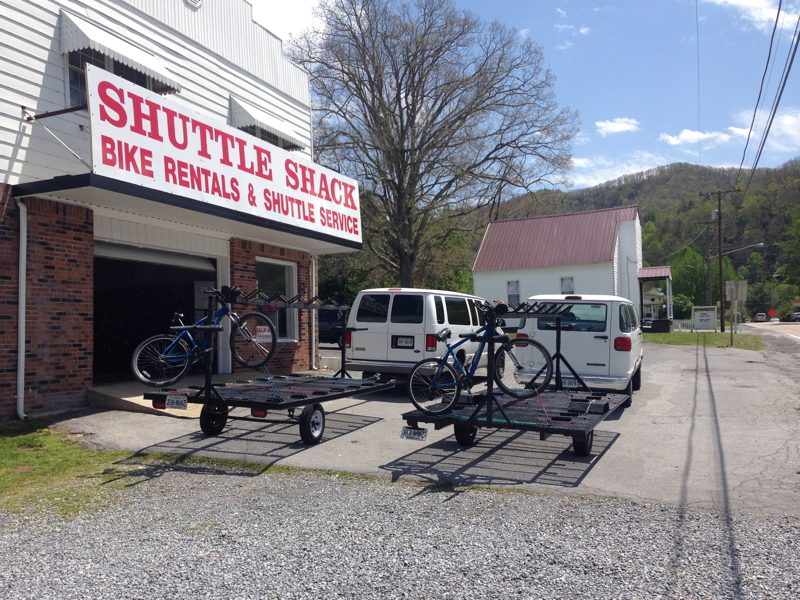 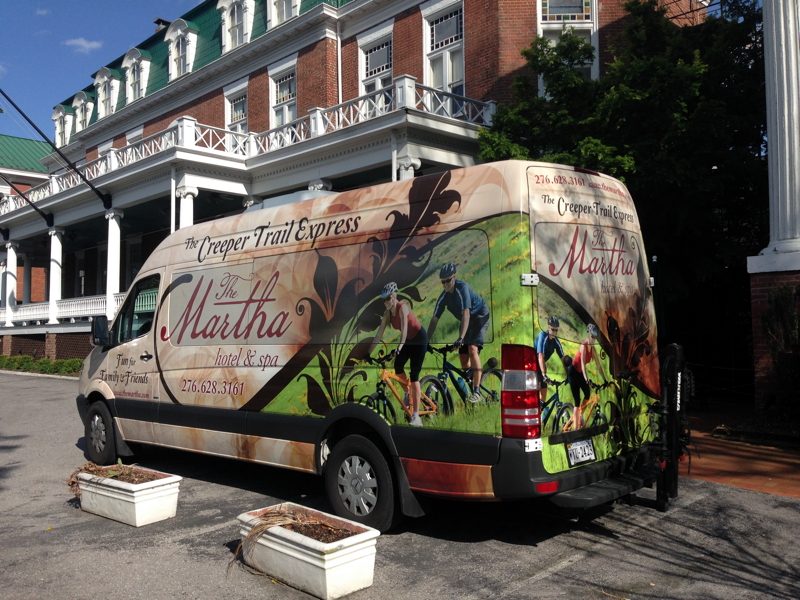 The Creeper Trail has transformed the economy of Damascus. Back in the day, my mother liked to drive over there to visit “The Damascus Junkman” – an antique and local curiosity shop. My memory of the main drag through Damascus is that it consisted of this antique shop, a convenience store, and a gas station. Today the town has a variety of restaurants and lodging options, and incredibly, seven bike shops all within a few blocks of each other.

So how do all these bike shops stay in business? Well, it’s not via sales, but through bike rentals and bike shuttle service. Part of the attraction of the Creeper Trial is that for 18 miles it gradually descends from 3,600 feet at Whitetop Station to about 2,000 feet in Damascus. This makes for a relaxed ride going in the downhill direction, so many visitors opt to have a Damascus bike shop drive them to the top in a passenger van with a large bike trailer in tow. Whitetop Station is named for the adjacent Whitetop Mountain, which at 5,520 feet is the second highest peak in Virginia. The remaining 16 miles of the trail from Damascus to Abingdon is fairly flat with some minor ups and downs.

Another thing to note about the Creeper Trail is that it is entirely gravel except for the wooden decks of the 47 trestles along the route. This gravel is a finely-ground type called Compact Aggregate that is easy to ride on, even with narrow tires. The fact that the trail is unpaved seems to have done nothing to quell enthusiasm, and it might have even increased its popularity, as tourists riding the trail feel it is more akin to mountain biking. This type of surface is one of the possible choices for the Salmonberry and deserves serious consideration with its ease of maintenance compared to asphalt.

So could the Salmonberry become as popular as the Creeper Trail with the more challenging terrain of the Oregon Coast range? I believe it could, given the increasing popularity of e-bikes, if a means is developed to rent e-bikes along the Salmonberry just like regular mountain bikes have been rented in Damascus, Virginia for the past 30 years. Once the trail is built there will undoubtedly be additional opportunities for tourism in the Oregon towns the trail will pass through like Buxton, Timber, Batterson, Mohler, and Wheeler. There was nothing along the Virginia Creeper when it was an abandoned rail line, but today the old train stations have been converted to businesses, and enterprising landowners adjacent to the trail have opened up additional shops.

I know the Salmonberry is a challenging project and there are already a lot of great people working hard to make it a reality. Hopefully this peek at the Creeper Trail offers some inspiration.

Get all our posts delivered directly to your inbox.

Thanks Tom, that gravel looks great. I’d much prefer that than the bumpy pavement along the Willamette Greenway Trail going to the Sellwood bridge.

Thank you Kiel! Speaking of finely crushed gravel, our Puddlecycle ride this past weekend was out in Fairview and Gresham and included the Salish Ponds. The gravel on the trails surrounding those ponds is nearly identical to the Creeper Trail and is a excellent local example of this type of surface. Jonathan did a post that included the Salish Ponds a few years ago:

Damascus also benefits from having the Appalachian Trail go right through the middle of town.

The Trans America Trail (Bike Route 76, of TransAm Bike Race (and other) fame) also goes right through Damascus- though many riders opt to ride the road rather than the tourist crowded gravel.

Yes, here’s the 8-mile detour I took to get from the TransAm up to Whitetop Station. Right next to the start of the trail is the Creeper Trail Campground, a nice spot that’s also a Christmas tree farm:

There could be some very interesting opportunities for that “shuttle up/ride” down model considering that the trail makes its way up and over the coast range. Especially for folks vacationing at the coast, if there is indeed a way to drive them up a ways for a fun descent back to the beach.

Last I checked, the Oregon Coast Scenic Railroad is capable of running trains from Garibaldi up to the confluence of the Salmonberry and Nehalem Rivers. I would imagine shuttle trains would be a big hit.

About a decade ago, the company that owned the rail line between Eugene and Coos Bay stopped operating trains on it because it was in such disrepair. The state of Oregon tossed over $100 million to the port of Coos Bay to take ownership and do the repairs, all so they could run about a train every other day of logs. The logging in this area is an industry in decline. I was so disappointed I couldn’t get any traction for converting this to a bikeway from Eugene to the coast, or at least some consideration to make this a rail plus trail. None of my legislators would even listen to me; they feared the wrath of the timber industry barons.

I used to live along this railway and have ridden on logging roads that are adjacent to it for two decades. This was a real opportunity missed by the state. I could see tens of thousands of people flying into PDX, riding to the coast (hopefully on a new rail to trail soon), continuing downwind to Florence and then returning on what would have been this connection followed by either the Willamette Valley Scenic Bikeway back to PDX or a Cascades train ride.

I guess projects like a $500 million freeway widening and the $100 million rebuild of I-5 in Eugene (done just to avoid going down to the national standard 80,000 weight limit) are sooo much more important than things that make Oregon a wonderful and healthy place to live and visit.

Mike Quigley
Reply to  B. Carfree

Plus those occasional loads of logs are bound for mills in China, not Coos Bay, which remains mired in poverty and despair. Thank Peter DeFazio for this blunder.

I can easily see a utopian future made up of formerly abandoned railways repurposed into bike paths that connect towns.

Mike Sanders
Reply to  Will B.

The Montour Trail between a point just south of Pittsburgh, PA and the Ohio River in West Virginia is, in fact, a former rail corridor. It connects to the C&O/GAP Trail on the east end that connects back to Washington, DC. The C&O/GAP and Montour trails are being planned to become part of transcontinental US Bike Route 50. A branch of the Montour serves Pittsburgh airport, in fact, and there’s a fine YouTube video which shows this connection, as well as several comprising the Montour between Pittsburgh and West Virginia. A branch of the C&O/GAP Trail connects to the 9/11 Flight 93 National Memorial. That branch opened just last year.

Thanks for the inspiring story, thanks! Another good comp might be the Willapa Hills trail:
https://www.wta.org/go-hiking/hikes/willapa-hills-trailhead
The 20+ miles from Chehalis to Pe El are very rideable with some beautiful spots along the Chehalis River. The portion west of Pe El to Raymond doesn’t seem to currently exist in any rideable form, as far as I could tell from an excursion last summer. But I highly recommend the eastern portion.

The same is true for the 25 miles of mountain bike trail they built in downtown Richmond, VA. Initially, there was doubt about a litany of perceived problems with building trails in an urban environment but these trails are wildly successful. It’s funny how “open-minded” Portland has such a hard time being open-minded. #MTBPDX #FreeForestPark

+ 1 for packed aggregate vs asphalt, drains better, easy to repair, and doesn’t sanitize the riding as much.

Unfortunately the bureaucrats have taken over the Salmonberry Rail to trail project, and instead of having a trail next to the tracks that the Oregon Coast Scenic Railroad still uses, it’s looks like they’ll shut down the OCSR’s operation up the Salmonberry. Hopefully an agreement can be reached that allows the OCSR and the trail to co-exist where the rails are still in use.
The OCSR tends to run fall foliage tours, and dinner trains up that section of track. They run steam between Garibaldi and Rockaway. They still run McCloud #25 which was the locomotive used in the movie “Stand by Me”. https://oregoncoastscenic.org/

If there is room Rails with Trails have basically the same safety record as Rails to Trails.

That’s a shame, the trains would be so infrequent it would be a novelty to see the OCSR in the rails with trails segment not an annoyance or serious danger. Who in the legislature should we comment to to express recreational trail users support the rails with trails option? Apart from it being a good idea it could foster good will, I hate to think the rail excursion enthusiasts would feel we’re pushing them out.

Here in the westside I’m also still hopeful for a rails with trails option along TV Highway that there was discussion about a few years ago.

The Virginia Creeper Trail goes through my farm property halfway between Abingdon and Damascus. I purchased this land primarily to have easy access to the trail. After it opened over 2 decades ago, a winery was built near by, and soon local farmers began growing grapes. The tasting room at the winery is a popular stop for trail bikers and hikers. Likewise, a variety of lodging options along the trail have added another positive dimension to economic growth. The VCT provides year round enjoyment for residents and visitors alike in our rural communities. “GO FOR IT!”

Another TV news bit about it: https://www.youtube.com/watch?time_continue=178&v=WxAwndIkwwY