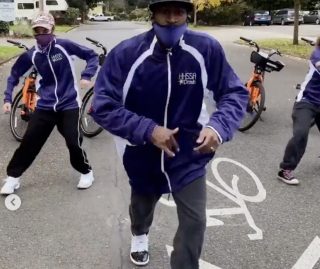 Streets are not truly safe until you can break dance in them.

The Portland Bureau of Transportation (PBOT) is reaching deep into its bag of tricks to promote cycling on their 25 miles of new neighborhood greenways east of I-205.

Over the summer they gamified the new routes with a Go By Greenways game that awarded prizes for people who found keywords posted on Zebra-themed flyers. While working on that game, they met the owners of Hip Hop Soulsation Academy, a local business that teaches hip-hop, freestyle, and contemporary dance just a few blocks from the new HOP (Hollady-Oregon-Pacific) Greenway.

The Hip Hop Soulsation dancers created a new dance dubbed the Greenway Shuffle and demonstrated it on PBOT’s media accounts last week. Now they want everyone to try the steps and submit a video to @PBOTInfo with the tag #GreenwayShuffle. If you do, they’ll send you a gift code to redeem for a free ride on the new e-bike Biketown system so you can explore even more of the new greenway network.

“When we met Cykhyia and Tyrell Sanders from Hip Hop Soulsation Academy,” PBOT Communications Coordinator Hannah Schafer shared with BikePortland today, “We knew we wanted to find a way to showcase the work they do in the community. A couple meetings and brainstorms later and we had a plan.”

Check out PBOT on Instagram for more videos of the slick HHS crew and contest details.

They should do something similar on the I-205 MUP.

That might conflict with the I-205 MUP’s official elimination under the “ceding” plan by the new city government. Or maybe the plan is just to delete certain existing sections and somehow re-route and detour to adjacent greenways?

Guest
usually not a commenter but this is ridiculous

The above post from Jack C. is racist and unacceptable. Mods, please take action. The dancers are wonderful, and you can see more of their moves if you click thru to twitter or insta – which i recommend.

Thanks for sharing your feedback about Jack C’s comment. I read it several times carefully and — while it does make me a bit uncomfortable, I don’t think it rises to the level of “racist and unacceptable”.

And I agree with you that the dancers are wonderful!

Guest
usually not a commenter but this is ridiculous

I appreciate the care you’re putting into making sure freedom of speech is respected Jonathan, but I do want to state that I strongly disagree with you here. Peace.

The video and clips I’ve seen show Black people dancing, yet Jack has layered on top of them all sorts of other constructs of his own creation. It is a profoundly racist comment. First, Jack asks if “everything” needs an “ethnic” theme, suggesting that white and white expressions of dance are the norm, and any variation of that in appearance or style is not normal, or a deviation.

The comment also lumps all Black people into a group that he describes as “cultures that glorify antisocial attidues and disrespect police.” I saw nothing in the video or clips about policing or the attitudes of these dancers towards others.

And then the comment uses as evidence one white man who was assaulted by a Black man to criticize all Black people and Black Lives Matter. He is using the example of one Black man to represent Blackness, and to represent these dancers.

Jack has conflated hip hop, Blackness, criminality, and anti-police-brutality protests. Truly, this might be the most racist comment I’ve read on Bike Portland.

Thanks Joan. After thinking about this more, I’ve decided to delete the comment. I might have been over-thinking with my initial rationale for leaving it up. I really want a wide range of beliefs to be expressed on this site and I felt Jack C was expressing his beliefs in a way that might allow us to have an important conversation about racism that was better served by leaving the comment up and exposing it to criticism — rather than taking it down.

But in the end, I agree with you that it just caused too much pain with its harmful stereotyping and I believe it was definitely rooted in racism. I appreciate you helping me think through it. Your comment references it enough so that I think people can get a sense of what Jack C. wrote.

Um, yes. The comment is straight up racist. No doubt about it.