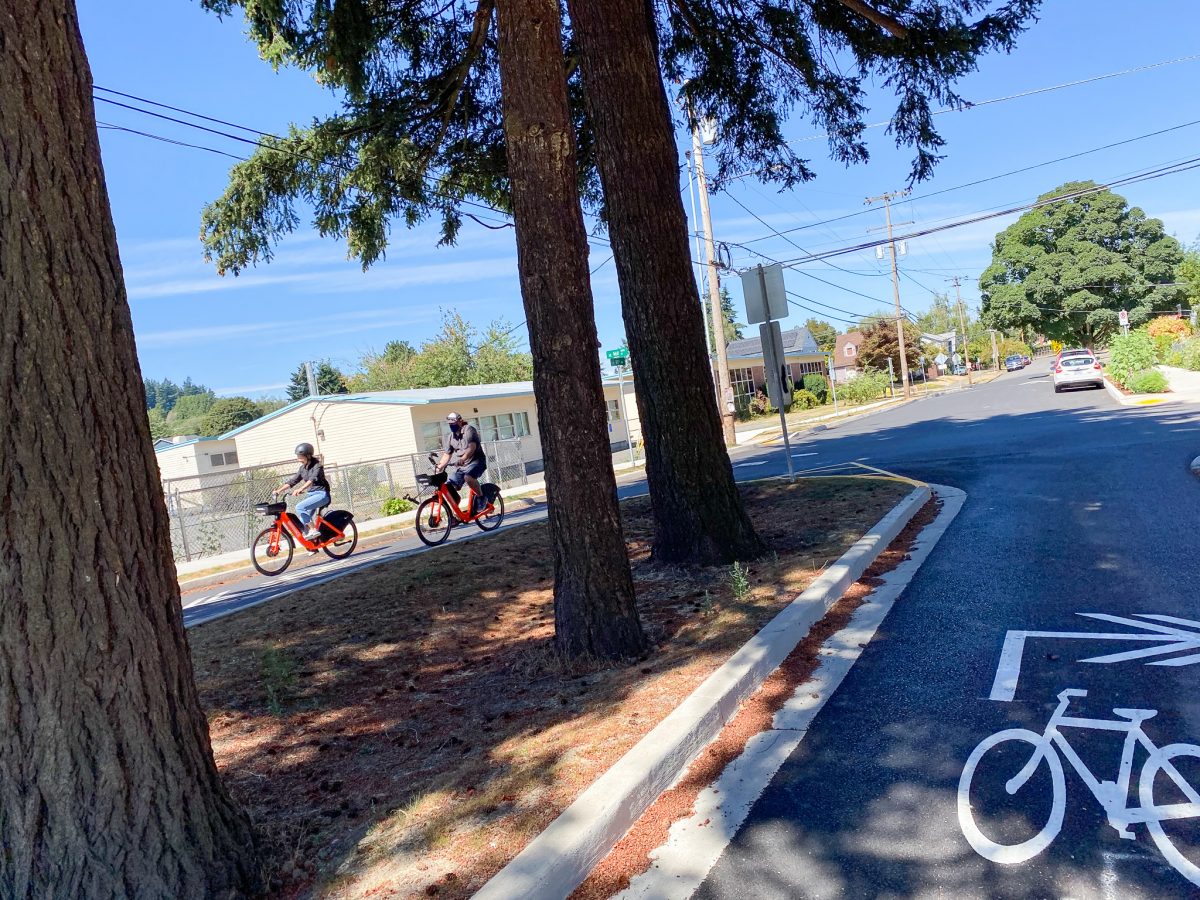 The lane on the right used to be someone’s front yard.
(Photos: Jonathan Maus/BikePortland) 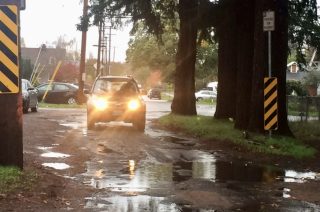 It’s a shame Bridger Elementary and Harrison Park Middle schools will be so quiet this year because its students and staff would be amazed at what the streets look like outside of them.

No more mud. No more puddles. And no more weaving cautiously around drivers and cars on the walk or bike ride to school.

“To watch my students come to school with wet shoes — knowing that those are their only shoes — because they have a journey to school that involves walking through water is heartbreaking to me,” Harrison Park Middle School Assistant Principal Michael Rowell said in a Portland Bureau of Transportation statement when the project broke ground back in February. “I think it’s an assault on their basic dignity to have to live like that.”
PBOT and the Portland Bureau of Environmental Services have finished the $2.6 million project that added new pavement, speed bumps, drainage, and sidewalks to a multi-block stretch of streets on SE 80th and Mill in the Montavilla neighborhood. The project was an example of collaboration that also included Portland Public Schools and 21 nearby residential property owners, who were so tired of the unsafe, unpaved streets and seasonal flooding on “Lake Millstreet” they agreed to form a local improvement district and chipped in $758,505 to help fund the project. (You might recall our story on Amy Wren’s Portland State University transportation class project that focused on this area.)

Just one block from bustling 82nd Avenue, 80th used to be unimproved for a half-block outside Bridger school. And the block of Mill from 82nd to the school — a key route to school for many students — had no sidewalks and was often strewn with gravel and foot-deep puddles. In a 2016 video created by Rachel Kimbrow to raise awareness of conditions outside the school, one student shared that, “The street we walk on, there’s really no sidewalks and there’s a lot of cars parked on the side. We have to walk in the middle of the road and my mom’s always nervous because they don’t always pay attention.”

Now the blocks have continuous sidewalks and PBOT has widened a section of 80th near Mill while maintaining several large trees in the center median to help with traffic calming. Ironically, because the street is now paved and smooth, we’ve heard some concerns that drivers are going faster than they used to — despite this area being a neighborhood greenway with 20 mph speed limits.

While out there on Monday I spoke to a man who was walking slowly on the sidewalk with a cane. He said he feels much safer now while on foot; but that the project has also made it easier for him to drive because he no longer goes a few blocks out of his way to avoid the narrow, unpaved road.

Check out these before/after images:

Big cheers for the local advocates (Amy W., Rachel K.) and creative folks at PBOT (Andrew A.) who worked so hard on coming up with this idea and connecting the dots to get it funded. You even kept the trees. Thank you for your persistence and for caring enough to make this little piece of the world so much better.

This is fantastic. There are so many streets that need these improvements in east Portland, and I’m glad they are prioritizing bike routes and safe routes to schools.

Waiting for the comments lamenting the loss of gravel routes in the city.

Why didn’t the city make this a park like NE 13th at NE Holman?

Does this mean I can bike 80th from Washington to Division without riding through rocks? Is there still a block of loose gravel between Lincoln and Harrison?

This also provides a much improved connection to those biking and walking to Portland Community College.

These neighbors are awesome if they paid for that work! Must have been expensive too, but it looks great and must be very functional.
The before images look like the street in front of my house. 😛

So now that we’re biking with kids, we head down 80th to Bridger on a weekly basis. It’s a great spot for them to run around and play. We’ll also keep riding and go up through the Slavic Church parking lot to PCC, and then ride around the campus. It’s a nice area for low-stress family riding. The east-west alleys between 80th & 76th and Salmon and Washington are a lot of fun, too. The Mill street improvements and light make it easier to cross 82nd, without having to go down to Woodward and out the back of Fubonn, though that’s a fun route. Crossing Division at 87th always has some debris and fast traffic.

I’d like to see the improvements continue with some kind of 80s bikeway extension through the PCC campus and across Division. It’s scheduled but the project managers are getting funky with the route north of Glisan and making it twist and turn off of 80th and into the 70s up there. I think the key part of improvements like these are maintaining a great alternative to 82nd for bikes that also has reduced car traffic.

I noticed this a couple of weeks back. It is great! I ride this area a lot. At first I thought I took a wrong turn because it was such a dramatic change.

This little bit of street always made me sad. The new version looks so, so much better!

Looking at the before/after photos of the property of the people whose front yard and driveway was mostly turned into street/sidewalk as part of the project, there is now a basketball hoop in their parking strip with the street as the court! That is cool.

Many, many streets ought to be calm enough for street play. Most aren’t, but this project at least moved one more into the “yes” column (I hope!)

On a different note, the lead photo shows two people riding the new BIKETOWN bikes. That’s the first time I’ve seen a photo of them in the wild.

Can someone explain how it is that such a large chunk of someone’s front yard was turned into the new street and sidewalks? Was it always part of public right of way or did the city have to purchase this land from the landowner?

I confess to being a bit contrarian on this matter. I grew up on an unpaved street in Multnomah and never suffered for it. Walked to school every day without sidewalks; delivered papers everyday for years with no problems. Learned to ride a bike on uneven gravel and later biked everywhere. We played in the street, the dog hung out in our potholes waiting for cars to chase, if someone drove too fast they lost their muffler or even bumper! We played sports on a portion of nearby cross street that was all grass thanks to the adjacent property owner; Mom said its city ROW, so play on!
The LID idea came up a few times back in the day. But why? more runoff, loss of trees, faster traffic…who needs it. Things are still unpaved out there, and most of us couldn’t afford a house on my old street.

On another note…what happens when you make a neighborhood more attractive? or the “next big thing?” as in Montavilla. You attract more people, more demand for housing, prices go up, rents go up, marginal folks, especially renters, move out or are forced to relocate.
This has been tagged as “gentrification,” but its more like normal capitalism, isn’t it?
And what are the options? I remember making a little speech at NW 23rd and Overton after getting out of jail after the Save the Good Old Houses demo. “More graffiti, more plywood, more crime!…those are the only things that can keep our community affordable.”
When we finally got around to looking for a house to buy, NW was too expensive, so we headed out to SE, “beyond the Pale” and bought a little place on Salmon St & 46th. so what?

I live in this neighborhood and have a kid at Bridger. LOVE LOVE the improvements. It makes it much easier to go on walks and bike rides and not have to be out in the road, dodging huge potholes and (in the rainy season) 8-12″ deep puddles. Would love to see this continue to the east on Mill Street, where it’s hard to walk from 82nd-85th due to parked cars and no sidewalks.

The city took away some great gravel grinding 😉 Just kidding these are really awesome improvements and a really useful connection between East Portland and inner SE. I like how they saved the big fur trees and how they were able to drain the water from the street. A few years ago I crashed on Mill when some of the water in Lake Millstreet had frozen into a giant ice rink and I went sliding.

Awesome news and reporting! Driven that off-road path for years as my kid was at Bridger and it was my drop off route, way safer now!
Thanks to all that helped.