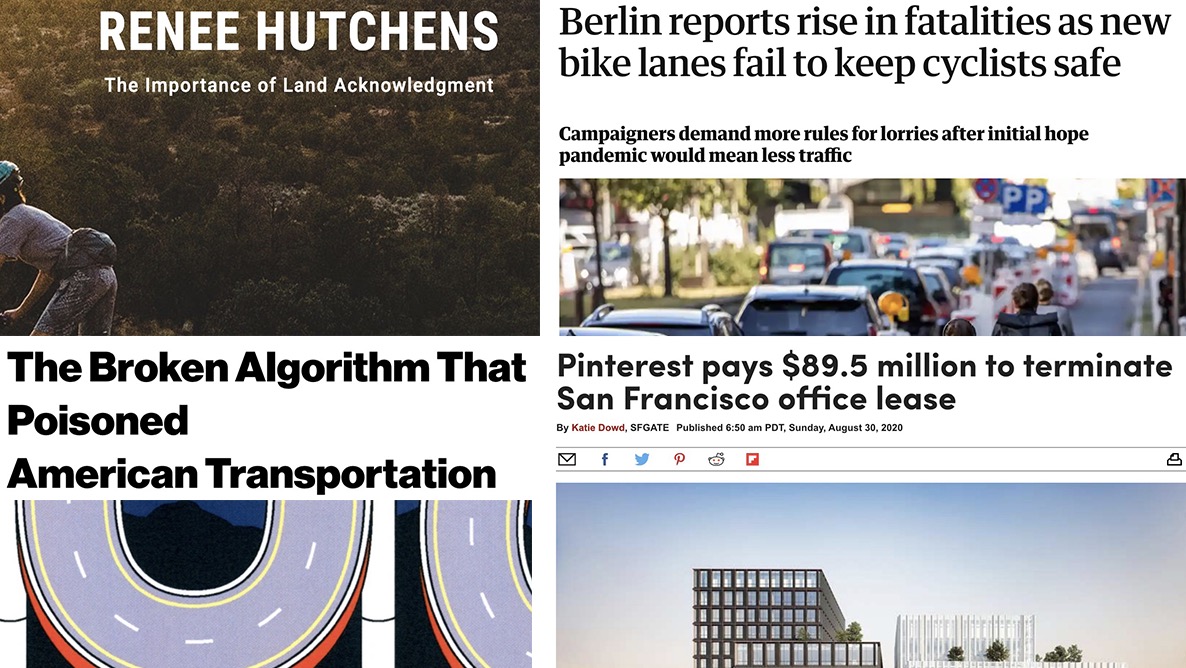 Welcome to the week. Here are the most noteworthy items we came across in the past seven days.

Bad modeling: Vice takes a deep dive into the “broken algorithms” that create traffic models that dominate transportation politics — and why we should stop using them.

Racism in transit: An excellent overview of how transit agencies perpetuate systemic racism in everything from how they design their buses and trains to which routes the vehicles take.

Local retail climate: Bike shops are busier than ever in Portland but product shortages have made it hard for some to fully capitalize on the moment.

Troubling legislation: Micromobility advocates are worried that a bill regarding liability insurance being considered in California would effectively kill bike and scooter share.

Zero deaths: It’s not often we see the words “simple” and “end traffic fatalities” in the same sentence, but Strong Towns thinks they’ve have the magic formula.

Cargo bikes FTW: More major mainstream exposure for cargo bikes, which are booming in popularity thanks to the pandemic, addition of electric motors, and various other factors. (Don’t miss the part where they use my photo without permission, payment, or credit!)

E-bikes = more biking: Newly published research found that, “People who purchased an e-bike increased their bicycle use from 2.1 to 9.2 km per day on average, representing a change in bike as share of all transport from 17 to 49 percent.”

More space needed: There’s an effort afoot in NYC that reminds me of conversations we’ve had about the Hawthorne Bridge: People are calling on the DOT to make one outer lane of the Queensboro Bridge available to people on foot.

About the land: This call to respect and acknowledge native lands by an Indigenous mountain biker is beautiful, powerful and timely.

Health of micromobility: NACTO has completed a comprehensive count of bike and scooter-share rides across the country and the huge numbers show the crucial role these modes are having on urban transportation.

WFH tea leaf: In one of the clearest signals that commute habits will be forever altered by Covid-19, Pinterest just terminated a deal on a 490,000 new office in San Francisco.

Cars are the problem: Berlin was one of the first places to aggressively install pop-up bike lanes during the pandemic. Unfortunately a rise in single-occupancy vehicles (due to fears of public transit) has contributed to more fatal bike collisions than last year.

Regarding the e-bike article,

There are other serious selection bias issues. Drawing conclusions from this is more than a stretch.

Regarding unauthorized image use, embedding a copyright statement in the EXIF or IPTC metadata within things you post might help. Maybe it’s in there before you upload, but I didn’t see anything when I downloaded a couple images off your main page

Great point about the short ownership periods. However, I have found my results to be similar.

My fingers are crossed *extra* hard that one day we will get some competent transportation and urban planners within Metro- and people listen to them.

Be sure to massage those fingers, to avoid cramps.

Metro has always had plenty of competent urban and transportation – they typically hire the best the city has and pay them more than the City of Portland can afford.

The real issue is that Metro acts for the Oregon side of the JPACT MPO (metropolitan planning organization). Like any MPO, their funding comes predominantly from a percentage of incoming federal and state funds, mostly for highways. They are chiefly dependent on a continuing car-dominated culture for their funding (though to be sure they get some transit planning funding and deal with regional trash.) As long as our congress (both houses and both parties) and our elected presidents (all of them since Eisenhower in the 1950s) perpetuate and promote such a culture through their governing (or lack thereof), every community will keep pushing such dumb legislation pretty much forever. It’s all part of our automobile-industrial complex.

Berlin pop-up lanes: I’m sure it has more to do with translating German to English, but I find it interesting that such a progressive newspaper as the Manchester Guardian would refer to truck/bicycle crashes as “accidents”, repeatedly.

The vast majority of recent peer-reviewed studies find that people who work from home tend to have higher vehicle miles traveled (VMT) than people who drive to work.

Middle of the Road Guy
Reply to  positivist

That is definitely not true in my case.

I am pretty skeptical of the causality implied in these articles. I was surprised by, but don’t doubt, the correlation. Here is what I think is going on:

Also contributory:
-People with more money tend to have bigger households (more successful in marriage/partnership; can afford the quote-unquote “good life” for kids/more kids if they so choose)
-White-collar workers who live/want to live in the exurbs/rural areas are more likely to seek jobs that let them telecommute. The lifestyle of living in those areas is associated with driving more.
-None of these abstracts say how often the telecommuting workers telecommute. I know a lot of people who, prior to Covid, would telecommute a few days a week and go in the office a few days a week. People who lived in rural areas/exurbs/Salem were WAY more likely to ask for this.

So… a bit of the above thinking points towards telecommuting making VMT worse. (If more companies allow telecommuting, then more people who want to live in exurbs/rural areas will be able to). But, most of it doesn’t, at least for 5-day-a-week telecommuting.

Really hard thing to tease out, but I’m not convinced from those abstracts that those articles showed causality going on.

When challenged with data that undermines laissez faire mythology, new urbanists are always skeptical (of the dehumanizing inequality of capitalism).

I was crying in agreement. I think Alan is a legal eagle but he doesn’t have the economic nor statistical foundation to shout out skepticism. I loved all the articles and think they were all relevant. Including the TDM article. Really impressive reporting by Vice, they have taken a decisive turn against pumping up car culture and I am Estatic to learn I’m not the only Economist who thinks federal TDM requirements are a LIE. Yes I have run TDM GIS models and have dug through and have helped build these backwards models. You can make them say anything ODOT pays you to say.

The Vice article failed to mention these models are also notoriously bad at predicting merging behavior, which is the main argument at the Rose Quarter. Yay more economist like Joe willing to say no to more taxes until we get a handle on equity in transport dollars. Thank you Joe!!! Now please don’t censure yourself. Your white male so people listen to you. HERO!

Aloha Jonthan – mahalo nui loa, for sharing NACTO’s Health of Micromobility report for 2019. We at Biki Bikeshare had been long anticipating the release of it. (Made our day to see that Honolulu is still listed in the top 6 systems in the USA.)

The next NACTO report for 2020 will be interesting…what wth COVID19s shut down of many scooter services and the remaining dockless bike systems. [I doubt any shared micro mobility system will have more trips in 2020 than 2019…except perhaps for Citi Bike.]

Re: CNN Article “ Don’t miss the part where they use my photo without permission, payment, or credit!”

Have you contacted CNN Business? I hope they will pay for use of the photo. Please keep is updated and let us know if you need help from the community.

It’s quite possible they didn’t get it from this site. In fact I think it’s more likely they paid a stock photo service for it. Remember this? https://www.latimes.com/business/hiltzik/la-fi-hiltzik-getty-copyright-20160729-snap-story.html

Is it the UPS photo? Because there’s a credit in the upper right that says UPS, which suggests that UPS stole the photo and then provided it (with their permission to republish) to CNN.

Yeah. The UPS photo. And my hunch is that someone at CNN conveniently assumed it was from UPS because that makes it easier for them to use without permission than stealing it from another news content publisher. I really don’t care that much. It’s just annoying.

O-live also had a pretty interesting article about local bike shops and how they’re not benefiting from the bike boom as much as you might imagine. There was one comment that they make money from bike sales, not service, which is 180 degrees the opposite of what I had always assumed.

I’ve been to many bike shops that will only service those bikes they’ve sold (they label each and every bike sold) – free for the first 100 miles, then at a set fee afterwards depending on the repairs. They simply refuse to fix anyone else’s bikes – you don’t just buy a bike, you buy into a relationship with your local bike shop. Typically such shops only make an exception when the bike needing repairs is expensive and they think you’ll eventually buy a bike from them – and if you don’t buy one, expect slack service the next time.

Since most bikes sold in the USA are from department stores (Target, Walmart, etc), and most of the rest are either used or online, most customers are probably too poor (or more likely too cheap) to pay a reasonable cost for repairs that includes labor, benefits, tool replacement, rent, storage, depreciation, overhead, and the general annoyance that shop mechanics have to endure from ignorant customers.

So given such high costs for repairs, why would any shop agree to fix a bike not bought there? Where is the profit in that?

The basic problem is that the vast majority of people think of bikes as toys and are simply unwilling to spend much of anything on them.

Add in that people equate new with good, so they buy junk bikes that fail quickly and literally aren’t worth working on. The bad experience reinforces their view of bikes as toys.

Even on this forum, I see department store bikes presented as an affordable option. This is only true for those who will barely put any miles over the life of the product (probably a true assumption in most cases). If you look at them from a cost per mile basis, they’re probably one of the most expensive options if you use them for real transportation.

Re: Cars are the problem

I found it interesting that the increase in bicycle fatalities with Berlin’s new protected bike lanes shows the danger of intersections. Nearly all of the fatalities they cited in the article occurred at places that allowed for motor traffic to turn across the bike lane. Protected lanes promote a false sense of security for the riders who use them. It frustrates me that PBOT is a cheerleader for protected lanes while failing to acknowledge the true danger of intersections.

For some, providing the perception of safety is more important than providing actual safety. Having vehicles to turn from a center lane across a bike lane is inherently dangerous — we would never design auto infrastructure that way.