In three short months 10 vacant schoolyards and parking lots in Portland have been transformed into miniature neighborhoods. These “traffic gardens” were created to give kids and families a place to pedal and roll together in a time when safe outdoor activities are in high demand. 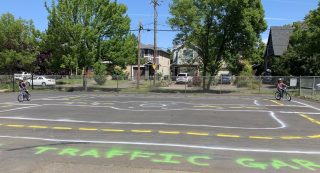 Traffic gardens aren’t new, but they’ve flourished in Portland recently because of the work of a local physical education teacher and renewed interest from the City of Portland and Multnomah County.

Sam Balto is a phys-ed teacher at César Chávez School in north Portland; but his interest in getting people to be more active goes way beyond his day job. When we first met Balto he was placing red plastic cups in bike lanes to illustrate the need for more protected cycling space. He was honored with a Weston Award from nonprofit Oregon Walks in 2019 and called for more open streets in Portland in response to the COVID-19 pandemic long before the City of Portland got on board.

Balto’s latest interest is traffic gardens — which are a perfect mix of his passions for physical education, Safe Routes to School and tactical urbanism. “It was obvious with COVID that something needed to be done,” he shared with me during an interview this week. “As a parent, you see all these spaces for kids — camps, parks, pools, playgrounds — are being closed and are off-limits. Access to free local play is now incredibly limited.” 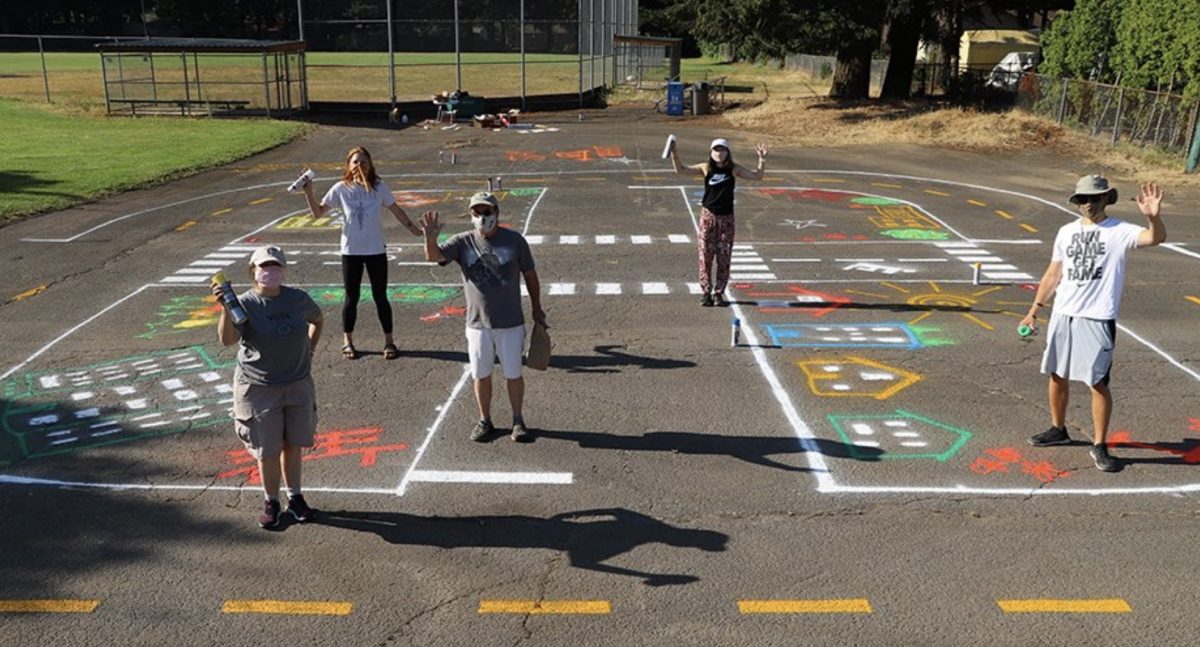 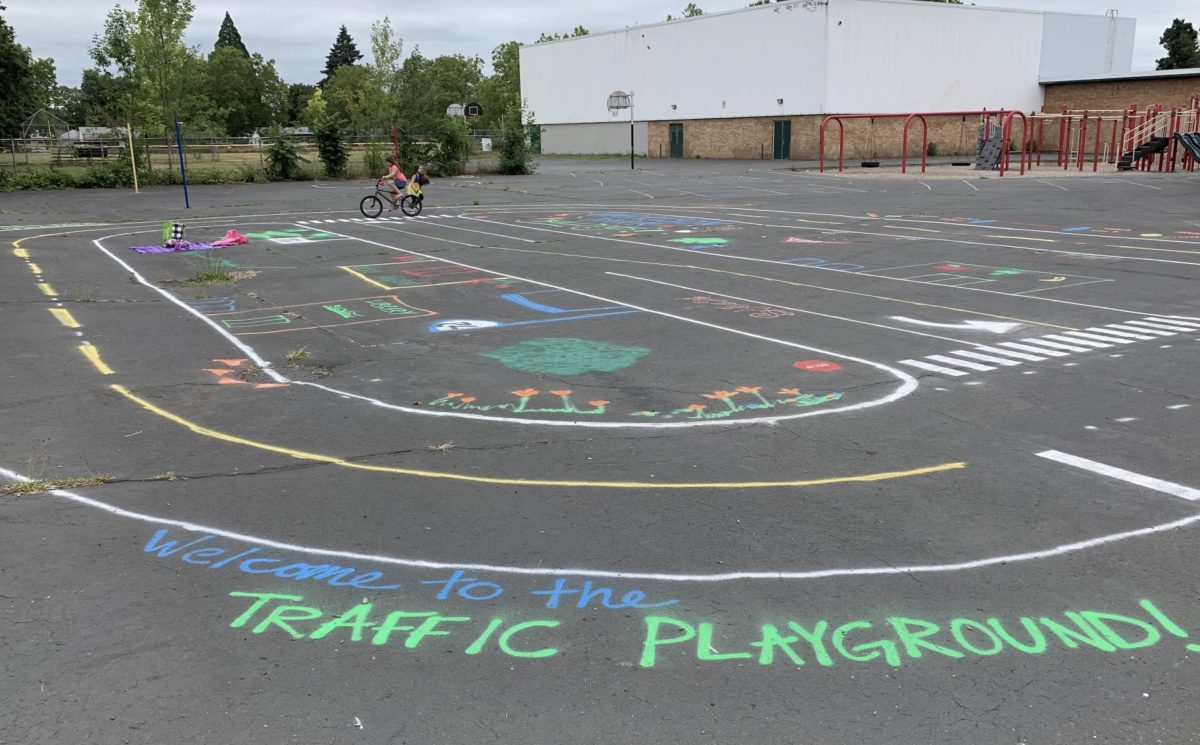 It turned out Balto wasn’t the only one on this wavelength. Safe Routes to School program staff at the Portland Bureau of Transportation and Metro also had traffic gardens in mind. With support from Fionnuala Quinn, founder of Discover Traffic Gardens, Portland had the perfect storm of conditions for the idea to take route. 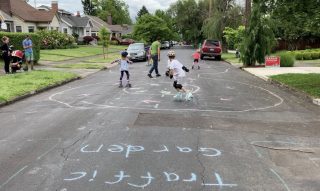 Balto created his first traffic garden on his own neighborhood street.

Balto’s first creation was outside his home in northeast Portland in mid-May. He then recruited volunteers and raised about $100 for supplies to create another one two weeks later in an unused corner of the playground at César Chávez School. Yesterday Balto put the finishing touches on a traffic garden at Roseway Heights Middle School — his sixth traffic garden in three months. He estimates his total costs have been about $250.

PBOT has been supportive of the projects and has even done some of their own. Spokesperson Hannah Schafer said they’d planned on doing some of them before COVID-19 hit. A pause on their progress ended when they heard from partners about the urgent need for spaces where kids and families could get active, physically-distant fun. “Since we typically teach bike safety education during the spring and could not do so because of school closures, we pivoted and supported our school communities and families with temporary no-contact traffic playgrounds and play spaces,” Schafer said.

PBOT, who prefers the term traffic playground, installed their first one at Sacramento Elementary School in the Parkrose Heights neighborhood. They’ve since created two more at Harrison Park School and Lents Park.

PBOT’s traffic playgrounds are a bit more involved than Balto’s and they are more selective about locations and design. Schafer said the city works collaboratively with community service organizations like Hacienda CDC, Home Forward, and Rose CDC “To create spaces that speak to their residents, and satisfy their space constrictions.” Using funding from the Safe Routes to School program, PBOT’s traffic playgrounds cost around $1,500 to $5,000 per location. 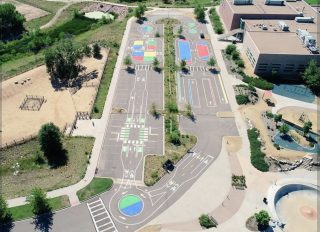 How they do it in Denver.

Multnomah County is also getting into the act. Last week they completed a traffic playground with the City of Gresham at Pat Pfeifer Park.

Balto has created a Google Map that lists all 10 of the current sites in the region.

Fionnuala Quinn with Discover Traffic Gardens says she’s tracked down 140 sites nationwide and there’s been an uptick in interest for quick-build versions in the past month or so due to the pandemic. “Traffic gardens are such a flexible concept that they could readily be reworked so they are suitable in the new environment,” she shared with us this morning. “Adding back the fun aspect of community life is especially important – I had a local parent tell me that they think the only thing that their 7 year old will remember about the pandemic is the traffic garden on our street.”

Quinn says anyone can create one in their neighborhood. She’s created a DIY guide full of tips on how to plan, design, and implement them. If you’re interested you can order a complete installation kit from her website (that’s how Balto got started).

While DIY installations are great, Balto hopes someday to build something like the Montbello Bike Course in Denver, Colorado which features realistic infrastructure elements and had a price tag of about $100,000.

For Balto, traffic gardens are more than simply a place to play and practice safe riding skills. “In this moment of COVID we can show our children that we can create something new. Even though things are so troubling, children see that something has changed and has been created for them.”

Check out this video of Balto’s latest creation at Roseway Heights Middle School.

My dream is that one day kids will visit museums with traffic gardens like this along with other interactive displays to learn about what life was like in the transportation dark, ages when people raced up and down the streets right in front of where people lived in giant multi-ton steel boxes spewing pollution and bits of rubber and brake dust. They will be aghast at how people of all ages were run down and killed on these streets by these primitive mechanical beasts. They will marvel at how people were only able to walk in moderate safety in little painted lanes and much of the land was too dangerous for children to play on. I imagine it to be much like us today visiting a museum with displays of medieval torture, or the Salem witch trials.

I too look forward to the days when teleportation is a reality! (Or we’ve built new cities designed in a fundamentally different way than any existing city… either would be great.)

“Let them eat chalk”.
For those who are already, and will soon be, lining up at food banks as a result of the controlled demolition of the economy..

What’s wrong with chalk? Most of our economy is composed of promises to pay, polite fictions, fancy wagers, pieces of paper and drifts of charged subatomic particles. Lots of what we call work actually produces nothing (my job for instance). Nevertheless, we eat.

I think we can find ways to support each other while we figure out what’s next.

Richard don’t worry! They will have this all worked out by the November election.

That makes sense. The Wealthy 1% are purposely destroying the economy and thus all the assets (wealth) that they own so they can hopefully replace it with what? An economy based on Microsoft windows and mandatory vaccines? A slave economy based on microchipped workers and robots? This controlled demolition idea makes about as much sense as Elon’s colonies on Mars.

I saw them doing the one at Lent’s Park and didn’t realize it was part of a larger project.

Thanks for your good work to make this happen, Sam! And thanks, Jonathan, for the nice story to help boost this excellent idea.

There’s some type of children’s bike park at the church on Stark Street across from Portland Nursery. Anyone know what is happening there?