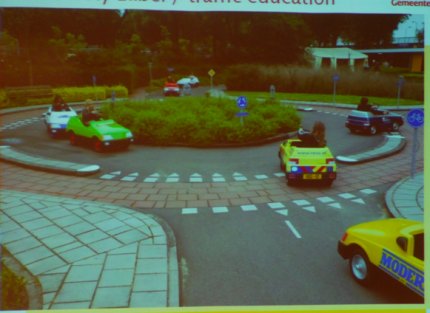 There’s a strong myth going around that the people from Western Europe’s most bike friendly cities are somehow just different. They must be born with a gene that makes them bike as a natural extension of life, right? Well, the more you learn about cities like Amsterdam, Copenhagen, and Utrecht, the more you realize that’s simply not true.

In all of those cities, planners and city engineers have worked hard to create a culture where streets are much more humane and where people voluntarily make the choice to ride, not because it’s some sort of statement or part of their identity, but because it is their preferred option.

At the Safe Routes to School National Conference yesterday, we learned that one way bikes have become so ingrained into those cultures is because they take youth education very seriously (unlike here in the U.S. where it took until 2005 before the federal government funded Safe Routes to School programs).

In Utrecht (with a bike usage share of 33% and up to 50% in the central city), school kids have access to a “traffic garden”. In a nutshell, it’s a mini-streetscape where elementary level kids operate pedal-powered vehicles. The goal is to learn how to be a responsible road user. 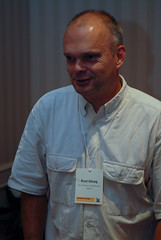 According to Utrecht’s bike program coordinator Ruud Ditewig, the facility is owned by the City of Utrecht and it has been in operation since the 1950s. School kids in that city take regular field trips to the traffic garden. Once there, they all assume various road user roles and the different modes are assigned different levels of responsibility.

Ditewig noted that all the kids want to drive the ambulance, which is also the vehicle with the top priority in the system (below that is a police car, a bus, a car, a bike, and so on).

A police officer or school official stands watch over the kids with a megaphone. If someone makes a poor decision or acts irresponsibly, they are called out and demoted, having to then work their way back into the game. “None of the kids want to be the pedestrian” noted Ditewig.

The learning happens when the kids realize that they must earn their right to operate a motor vehicle and that, if they make a bad choice, they will have that privilege taken away immediately (and in front of their social peers).

Greg Raisman, a traffic safety specialist with the City of Portland Bureau of Transportation observed Utrecht’s traffic garden during a visit last month. He said he was impressed by the focus on lifelong education. “It’s a great way to build an ethic of responsibility”.

There are many other traffic gardens throughout Europe, but so far none in the U.S. That might change though, according to Vivian “Kit” Keller with the Association of Pedestrian and Bicycle Professionals. Keller was part of an “International Scan Team” of 12 transportation professionals that took a trip through Europe in June. The goal of the trip to was observe innovations in biking and walking safety and mobility.

Keller said that group — which included officials from major federal agencies like NHTSA and the FHWA — was very impressed when they observed a traffic garden in action in Winterthur, Switzerland. In fact, they appreciated its potential so much that Keller said they will make traffic gardens part of their official policy recommendations.

National Safe Routes advocates are pushing to triple funding for the program in the new transportation bill. If that happens, traffic gardens could become an important educational tool and America will be on the way to more humane streets in the future.

I know a few adults that could benefit from this program. (I would love seeing them pedal around and get “demoted” to pedestrian for bad behavior.)

I think this is illustrative of something that needs to work its way back into American culture as a whole, and that is that we are all responsible for our own behavior towards each other. We aren’t completely autonomous individuals (though we are often treated as such by society), and I think teaching kids from an early age that they have to responsibly interact with other people is a great beginning.

I grew up in Utrecht and remember the traffic garden very well. It was the highlight of our school year to ride around in a ‘real’ car while pedaling your butt off.
The Dutch almost start biking before they can walk. And while in the US the kids go to school in a school bus, the kids in Holland hop on their bike to school as young as 6 years old. My high school was 20 miles from my house and I rode my bike every day. Rain or shine. And headwind…
Then to get a driver’s license, first of all, you have to be 18 (drinking age is 16, so get that discovery out of the way before you are allowed to drive a car). Secondly, the exam is a lot harder than the US and it requires 15-20 lessons from an official, government licensed, instructor. The combination of knowing a cyclist’s behavior and a more difficult driver’s test is in my eyes key to safer traffic. That, and the lack of SUV driving soccer moms in Holland.

I remember there being one in Burlington, MA when I was a kid growing up.

These probably aren’t as good or as good at emphasizing multimodal concerns, but they do exist here.

IMHO what greatly contributes to making this work is the clear set of traffic rules laid out for all the different modes working together. bikes there are bikes, a clear separation from peds and cars (mostly). none of this: “well here, act as a car, but if you want to get on the sidewalk you can, but not in downtown… take the lane when it is ‘safe'”
the rules problem is the biggest one i see here. it is very facility driven, however.

We had a “Safety Town” where I grew up. It was for kids in kindergarten and first grade to learn about traffic safety – much like is shown here. The cool thing about it is that older kids taught the younger ones. I volunteered when I was in 6th grade to help instruct.

These types of places may not be wide-spread, but they do exist here and have for quite some time.

My elementary gym teacher (who just happend to be Dutch) used to set something like this up in the gym and then we took turns doing the cicuit on bikes. There weren’t enough bikes to go around, so we had to take turns. Everybody learned the rules really fast, because everyone was watching and anticipating their next turn! It was really fun. I remember once taking a free right without stopping. I got demoted to the bench. I keep that memory close to me in traffic now.

I grew up outside of Chicago. We had Safety Town too. I remember it very well as was a highlight of my early education. A paved school playground was repainted with streets sidewalks green zones etc. I recall signs and “lights” that were operated by older kids.

I also could not graduate high school without completing drivers education through the school(semester long class including behind the wheel) or an outside organization (even more thorough).

They also have one in Longview Tx.

It was built with donations.

We’ve got one in Denmark as well. It’s super-cool
Here’s an image of the entire site from google maps
http://w0.dk/~chlor/legeplads/335/?viewone=1
And every images.google search for ‘trafiklegepladsen”ll give you a pageful of pictures.

From all the testimonials here about traffic gardens and safety cities in various places across the country, it sounds like Portland is a bit behind the curve on this one.

Definitely kids will get benefit from this

Okay folks. Rouleur (#11) is a troll and a NAZI. Don’t feel Herr Troll. Why don’t you delete offensive comments like that, Jonathan?

I meant to write “Don’t ‘feed’ Herr Troll.” I guess this type of blasphemous nonsense just gets my spelling riled up.

@Carl. Let’s stay away from Nazism and keep it civil. They might not have occupied your country, but that doesn’t mean it is appropriate to compare anyone with that regime.

I volunteer to be a pedestrian!

Don’t overlook the verkeerspark here in Assen. Allegedly the largest such attraction in the world. You can also see it from the air.

Man, what a fantastic idea!