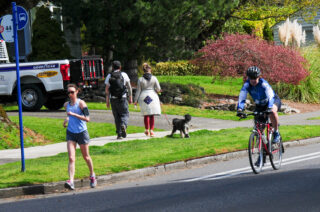 Runners using the street to avoid other sidewalk users has become a common practice in Portland.
(Photo © J. Maus/BikePortland)

It’s been a rip-roaring 24 hours in the streets activism world.

We’ve seen Portland’s Mayor say “no” to adapting streets to be in line with Covid-19-induced behaviors. We’ve seen the City of Oakland become a national sensation for saying the opposite. We’ve had some important chats about how groups that work with people of color see the issue. And we’ve had our first dose of tactical urbanism from someone who’s tired of waiting for changes.

It started when Portland Mayor Ted Wheeler took to Twitter to answer a question about giving more street space to give people on foot and bikes. Wheeler deferred to Portland’s transportation bureau and said, “If we close a street, we potentially make it more attractive and create a destination where large groups can congregate. This is exactly the opposite of what we want to do.”

Wheeler’s answer is disappointing. Of course if PBOT closed just one street it would be mobbed. But no one has proposed that. One idea is to create more space on many streets citywide so that more Portlanders have access to it. Wheeler’s view also has a paternalistic tone toward people who aren’t in cars — as if they’re all unruly children who can’t be trusted to make responsible decisions.

And as many have seen on recent weekends, “congregate” is what’s already happening on some streets because there isn’t enough space for people to safely avoid one another without stepping in front of car drivers. And many of these drivers, according to local police, are going much faster and taking more risks these days — all the more reason to take space away from them.

Wheeler and his PBOT Commissioner Chloe Eudaly seem to have less trust in the expected behavior of bikers and walkers than they do in the existing behavior of drivers. 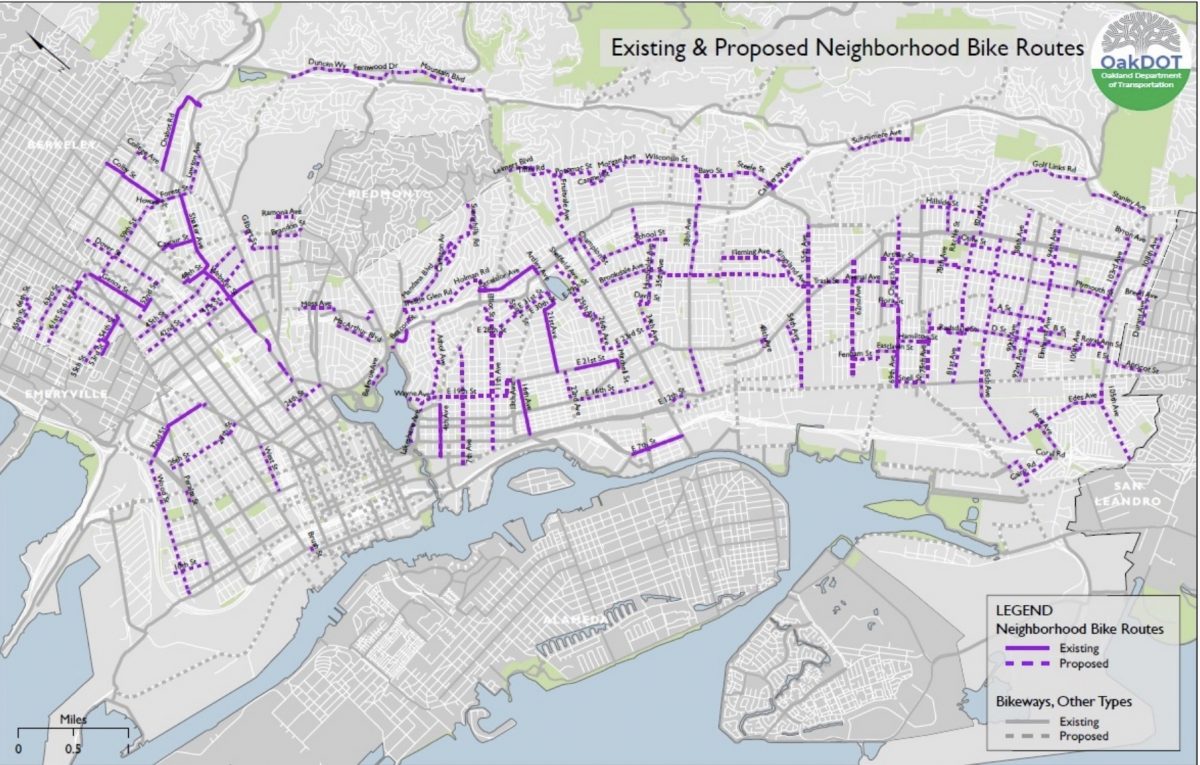 Meanwhile, Oakland Mayor Libby Schaaf sees things very differently. She announced today that her transportation bureau will ban and/or limit driving access on 74 miles of streets. That is not a typo. Schaaf made the move, “So that bicyclists and pedestrians can spread out and exercise and take in fresh air safely.”

Oakland is doing exactly the opposite of what the City of Portland wants to do.

One Portland resident who lives in the Beaumont-Wilshire neighborhood isn’t waiting for action from City Hall.

We received the images above this morning from someone who’s created a de-facto extended sidewalk on NE Skidmore east of 33rd adjacent to Wilshire Park. Using just cones and a bit of paint, the lane is intended to give people extra room to pass each other without being so exposed to drivers. The effort is similar to something that popped up today in Washington DC where someone has created a “pandemic extended sidewalk.”

These events kicked off a flurry of posts among myself and other people on Twitter today as we debate the politics and various aspects of this issue.

“When we surveyed 80 of our Cully community members to best figure out how to respond, mobility and travel did not come up.”
— Vivian Satterfield, Verde

“No racially or culturally specific groups in the Portland metro area that I am aware of… are calling for open streets.”
— Jess Thompson, Oregon Walks

I’ve been curious what local advocacy groups have been doing and why we haven’t heard from them about this issue. For one of them, Verde, who works to build community power and infrastructure in the Cully neighborhood, they’re simply working on other things.

“When we surveyed 80 of our Cully community members to best figure out how to respond at this time of crisis,” said Verde’s Vivian Satterfield, “mobility and travel did not come up.” Verde’s clientele is more concerns about how to access food, getting accurate information in their native language, rent relief, and internet access for their kids’ online schooling.

Satterfield also said some Cully residents won’t even make essential trips because they fear being asked for papers. “We are pivoting to be responsive to these needs first,” she added.

The leader of Oregon Walks, Jess Thompson, said they aren’t working on this issue be cause, “No racially or culturally specific groups in the Portland metro area that I am aware of — folks most negatively impacted by racist transportation policy — are calling for open streets.” Thompson, a self-described, “White, progressive active transportation advocate committed to mobility justice,” said she’s taking cues from mobility justice organizers and thinks the pandemic is an opportunity for transportation advocates to, “Slow down, listen to and believe folks most negatively impacted by racist transportation systems.”

Stay tuned: I’ve got a call with The Street Trust Executive Director Jillian Detweiler happening today and will update this post with her comments ASAP.

Oh Ted, or probably Eileen. “Large groups” can already “congregate” now, if they’re dead set on it. Nobody is doing it, and that’s because, well gee I wonder why. Nobody’s asking for a congregation space, ya jackasses.

You know what would be terrible, is if we “gave” a space to a group that declares they’re going to use it for one thing (deliver things, keep the economy going), but then they do another (kill people, drive drunk, street-race).

But wait I believe I did hear in that tweet, that closing streets to cars makes said streets more attractive. Didn’t know that, huh maybe we should try that shit sometime.

My experience in the last week is that drivers are behaving very courteously around pedestrians and bicyclists on local, neighborhood street. They seem to recognize that jaywalking and walking in the street to provide social distancing space is part of what’s needed and the drivers are responding positively. Not so with drivers on arterials where, I think, speeds are higher. I don’t think we have a problem that needs an infrastructure change.

Thanks for the quotes & links from Verde and others. It’s helpful context, and it gives me more to think about.

This bit from the linked Untokening piece mentions policing as a negative effect that could result (quoting directly):
“Define street safety in a way that centers the most oppressed and vulnerable groups. Policing is not a tool for healing our divided communities, and official street closures usually involve police. These are not a solution for equitable street safety in communities of color.”

The Oakland order didn’t make any mention of enforcement or policing. Perhaps that’s implied? If there actually isn’t enforcement, is it essentially a beefed-up “20 is plenty” / “please be courteous” campaign? And does that achieve its intended purpose in a way that does not introduce new problems for vulnerable groups? Is this an approach that’s potentially useful, but just not of relative importance for the most pressing mobility needs of the most vulnerable groups (versus, say, free transit)? Or if open streets aren’t an equitable street safety solution, what is?

We’re asking for infrastructure change while we walk within feet of one another at the grocery store. Isn’t this a bit disjointed?

Wheeler said, “If we close a street, we potentially make it more attractive and create a destination where large groups can congregate. This is exactly the opposite of what we want to do.”

Yet at the same time he’s saying that, the City is encouraging people to go to parks and greenways to walk and bike. It’s especially encouraging people to go to CERTAIN parks, because it’s closed some to traffic but not others. So with that, plus refusing to make small tweaks that could make streets outside parks work better for people walking and biking, the City is making sure that people DO congregate in a few parks and greenways, which really is “exactly the opposite of what we want to do”.

Aren’t pedestrians currently allowed to walk in the street? I didn’t think there was any specific law requiring them to be on a sidewalk. Of course, I grew up in SW Portland where sidewalks were few and far between.

If only there was a network of low traffic neighborhood streets that are safe enough for children to ride with their parents. We could call them greenways and divert through traffic to create a safe environment. Too bad we don’t have that system already in place and ready to go. : /

The Mayors of Honolulu, Maui and Kauai have created “wheel lite” streets at night by banning 99% of all wheeled vehicles this Easter weekend from 11pm to 5am. Travel by foot still allowed.
https://www.civilbeat.org/2020/04/nighttime-no-driving-rules-to-be-in-place-on-oahu-over-easter-weekend/

Ted is probably the worst mayor in Portland History. I mean, he makes Tom Potter look like a rockstar. Ted got one issue right-the stay at home order. Now he things being born on third means he swung a triple. This response about about the streets thing just proved it. I mean, he is so bad Chloe could do a better job by just showing up.

Plenty of people taking the lane and not waiting for the scraps of a Sunday Parkways type arrangement. Maybe it’s unlawful to put up some traffic cones on your block without a TSUP, and maybe we should lock up all these children with their chalk and scooters and squirt guns.
It’s your city, just take the lane and stop waiting for an elected person to be some kind of strong leader.