The 13th annual Mini Bike Winter Ben Hurt Chariot Wars had all the mayhem and merriment we’ve come to expect from this uniquely Portland spectacle.

Organized by Zoobomb and other local bike clubs, Chariot Wars were part of a three-day fest of mini bikes and freak bikes that included the “Torch Ride” Friday night and the Olympic Games and Zoobomb on Sunday.

The rules of Chariot Wars are relatively simple and are enforced by the “Goon Squad” (at right) — two referees that make sure everyone is on the up-and-up.

Each team can have two or more people. Entries consist of a steed in a bike (or bike-like vehicle) up front and a battlecar with a gladiator in the rear. Most of the fighting is done by the gladiator while the job of the pedaler is to keep the chariot moving and out of trouble. Teams are out when riders lose contact with their chariots and/or their chariot is permanently disabled. All weapons must be padded. Smoke bombs are OK, but there’s a strict prohibition on spraying competitors with bodily fluids, rotten eggs, or other seriously vile things. Spectators are encouraged to be rowdy, within reason. “If you want to battle, build a chariot,” the rules state.

Before the battle, fans, friends and competitors met at Essex City Park in southeast Portland for brunch and socializing. 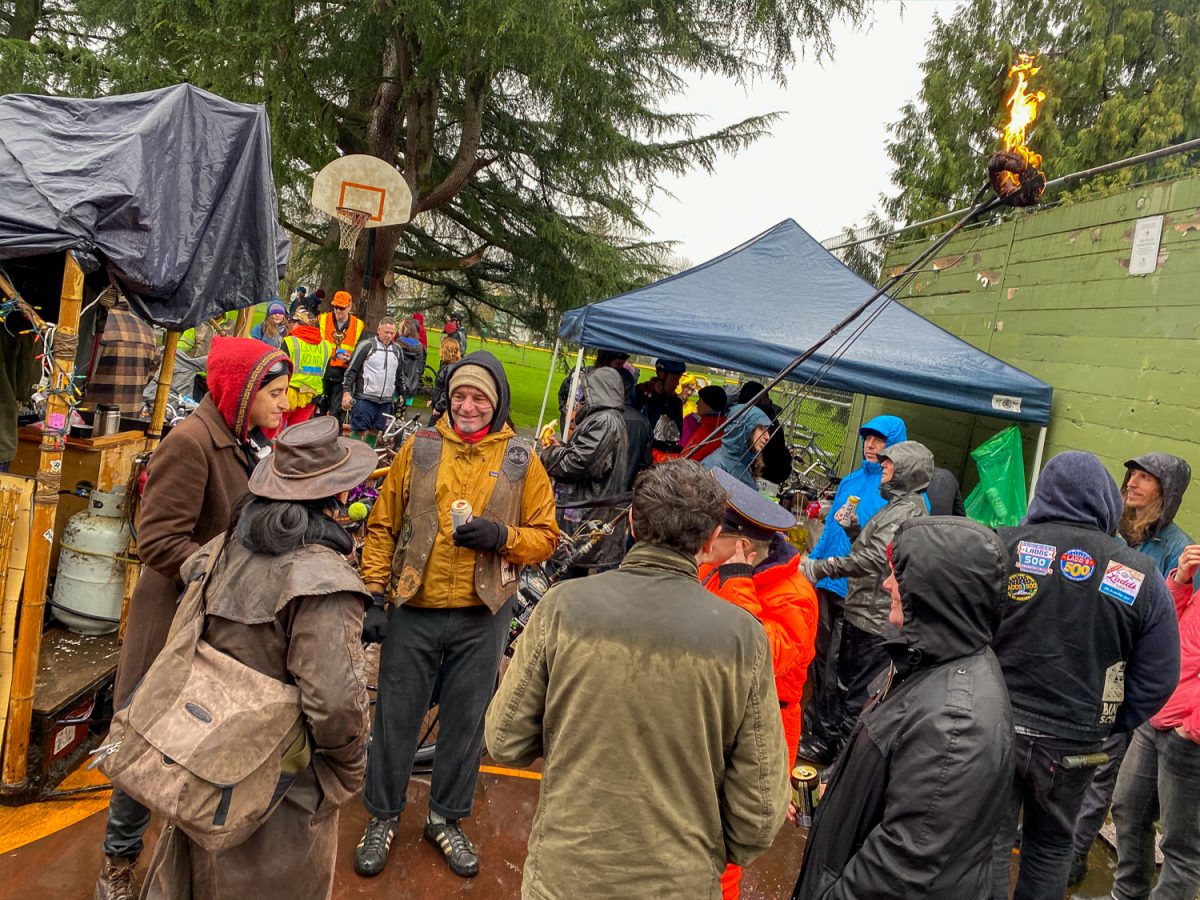 One amazing build that showed up was the Bi(cycle)-Plane built by legendary dudes Zane (seated) and Twitch. This is the same duo famous for the Hamster Ball and the pedal-powered Volkswagen bug that showed up in 2010. 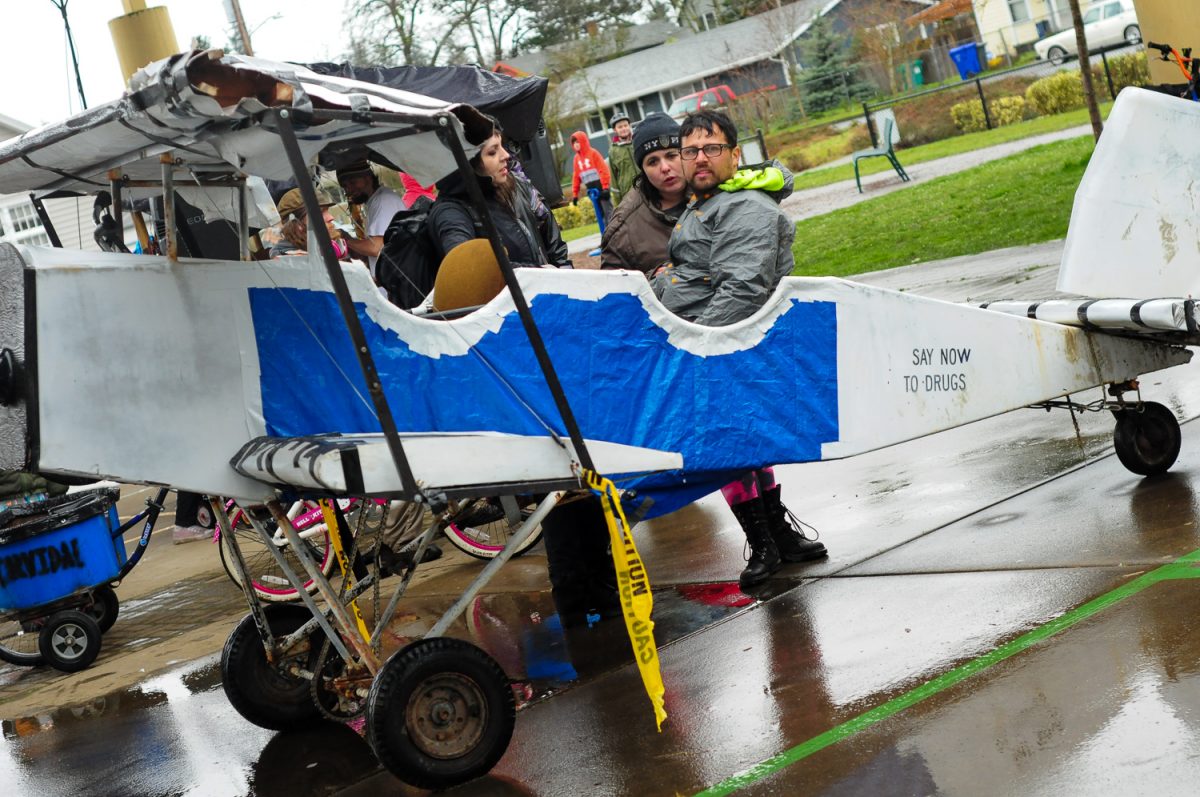 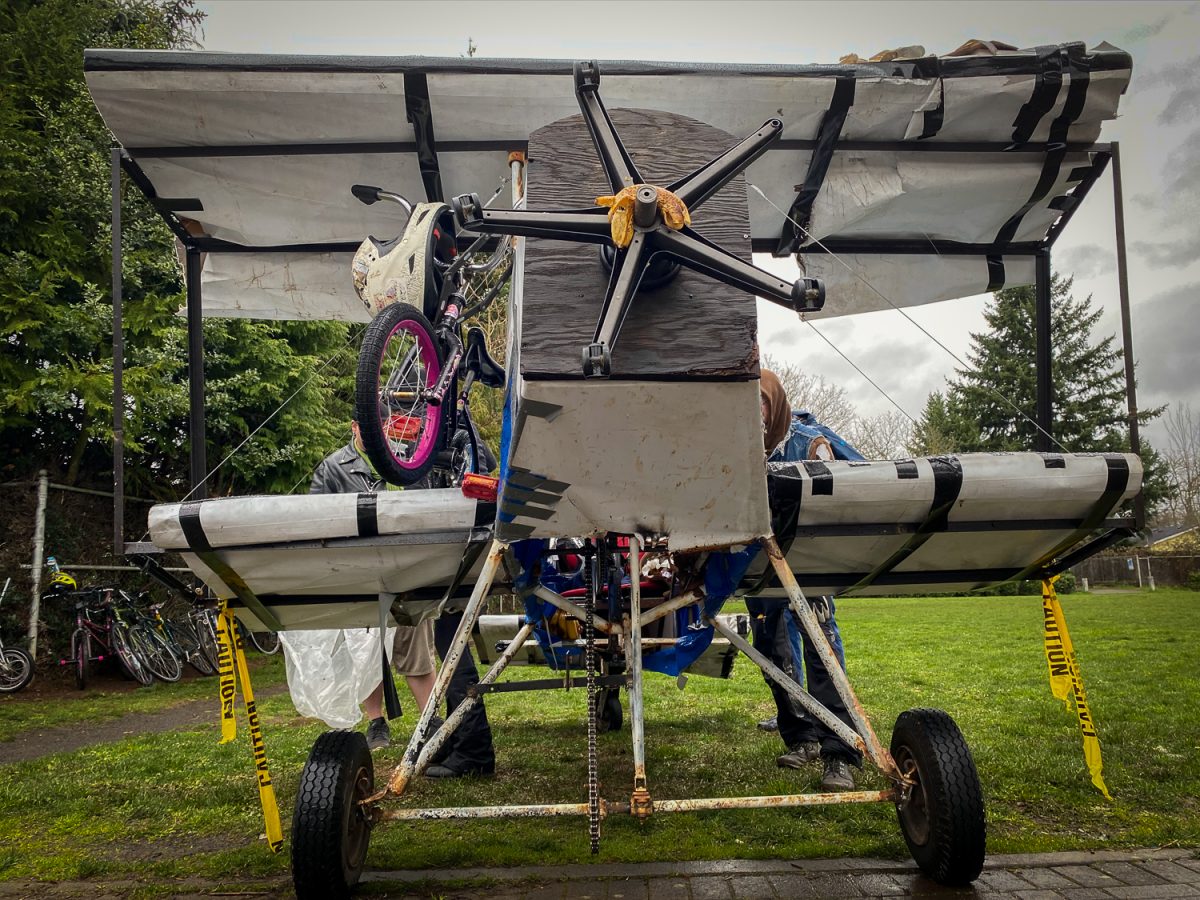 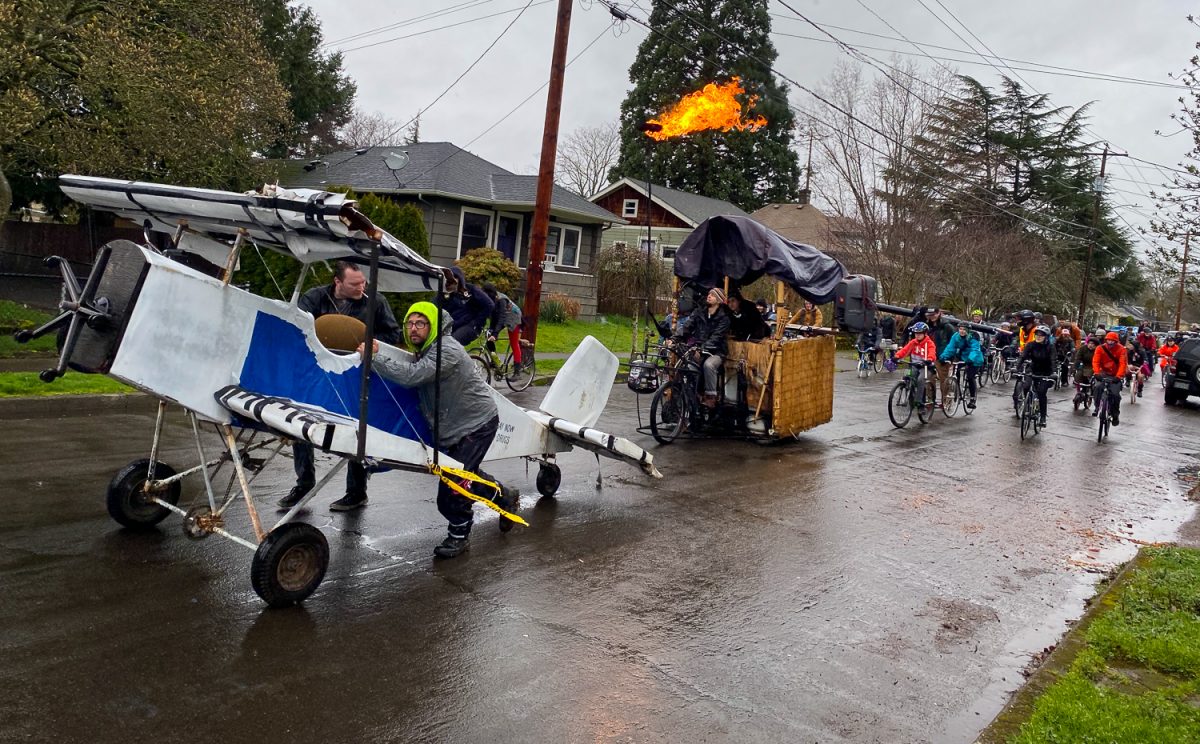 As we waited for the battle to commence, the crowd and competitors did their pre-war preparations: Spectators grabbed rotten bananas to use as projectiles, fans took pictures on the chariots, kids played on chariots of their own, and gladiators posed for portraits while pounding hydration fluids.

Then it was time to fight! 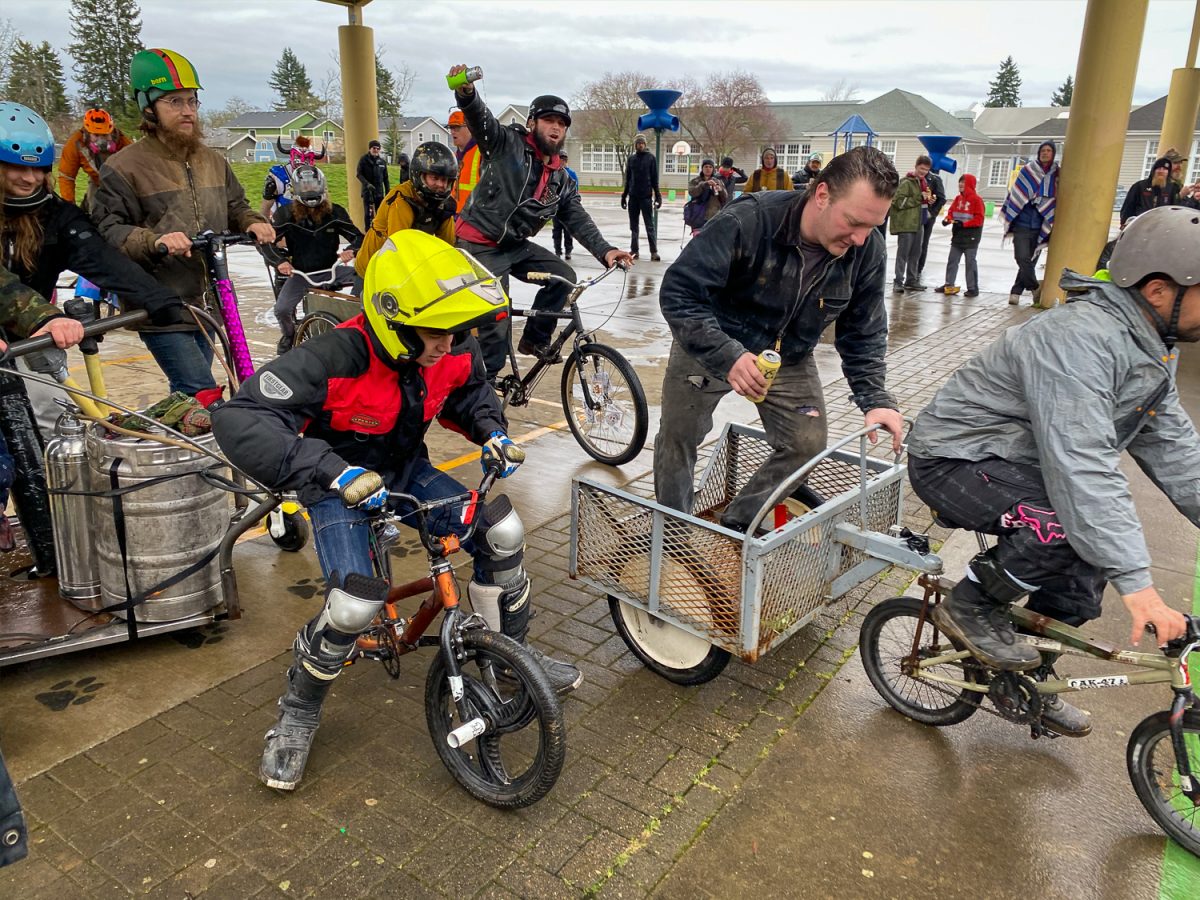 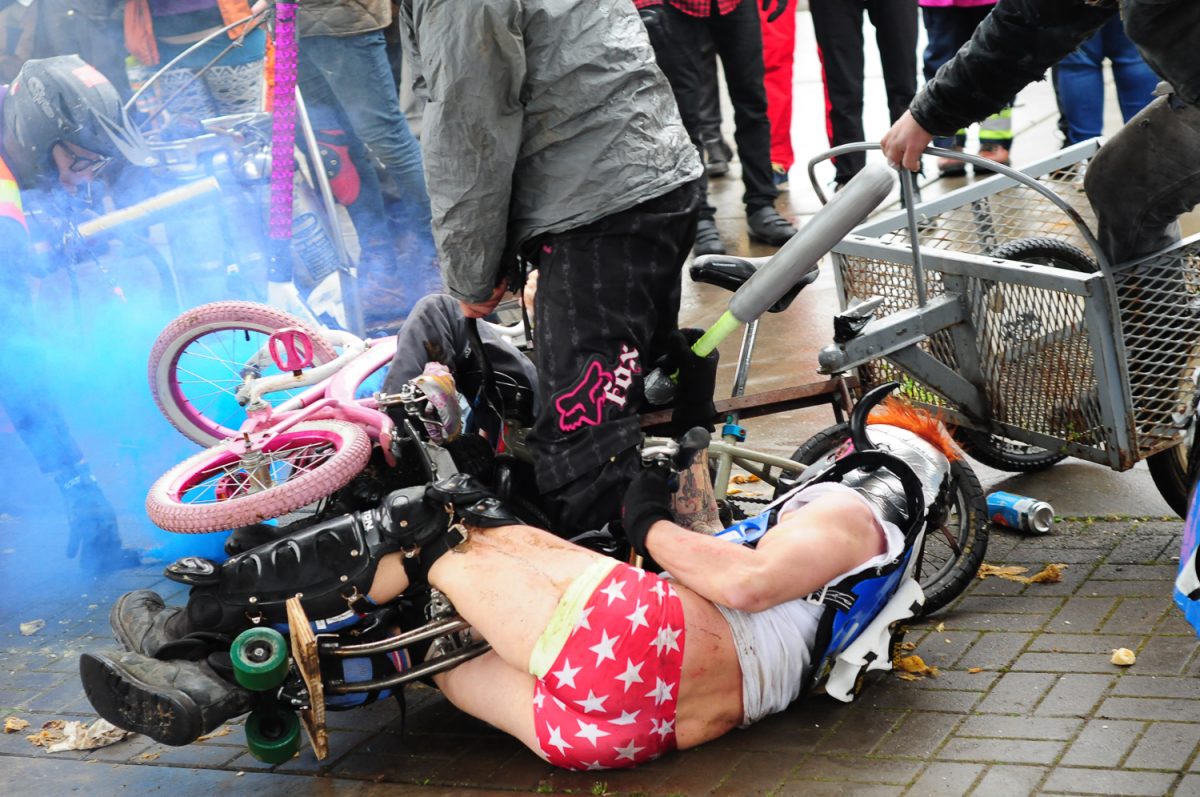 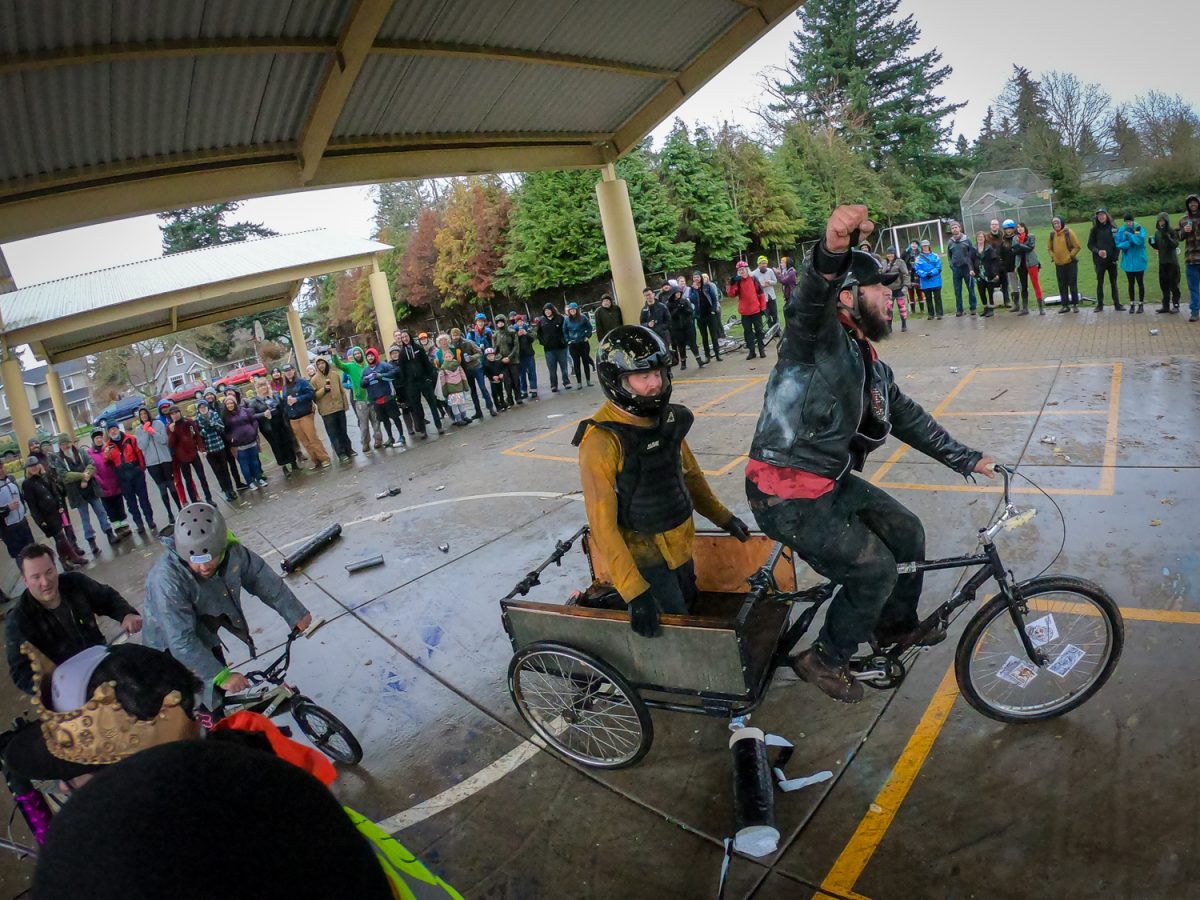 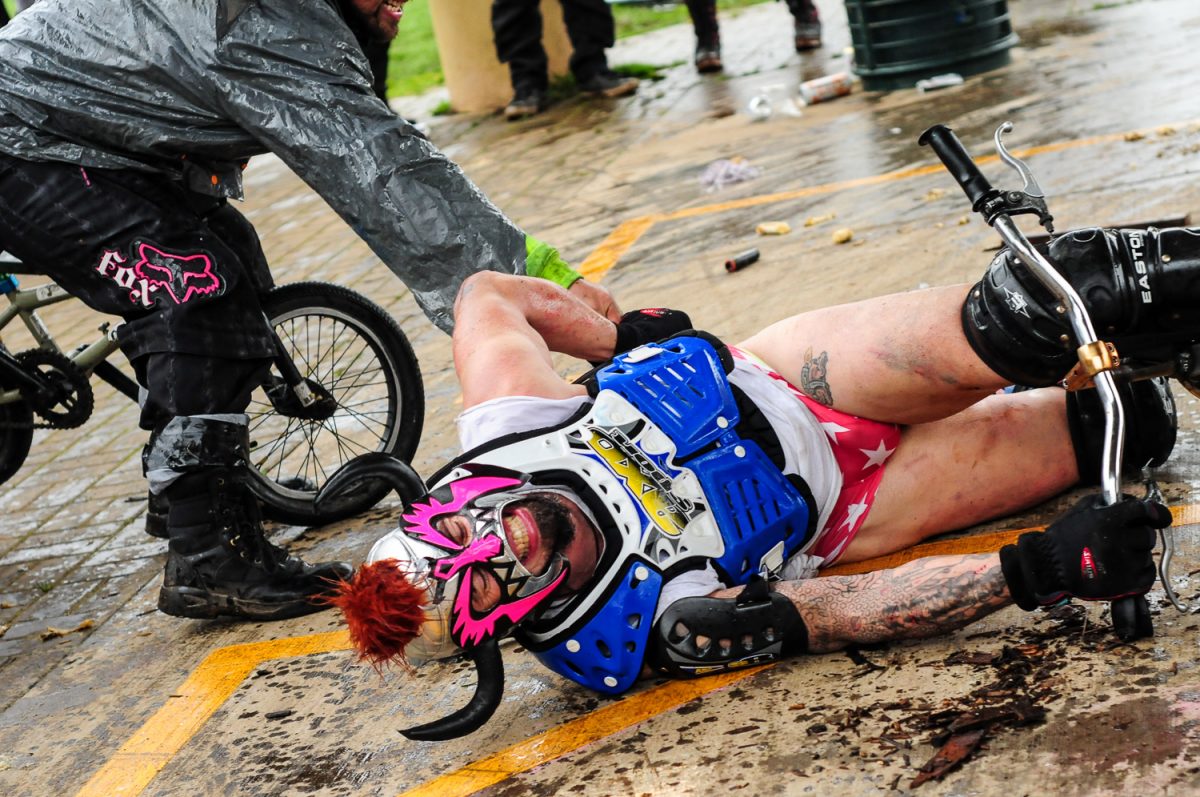 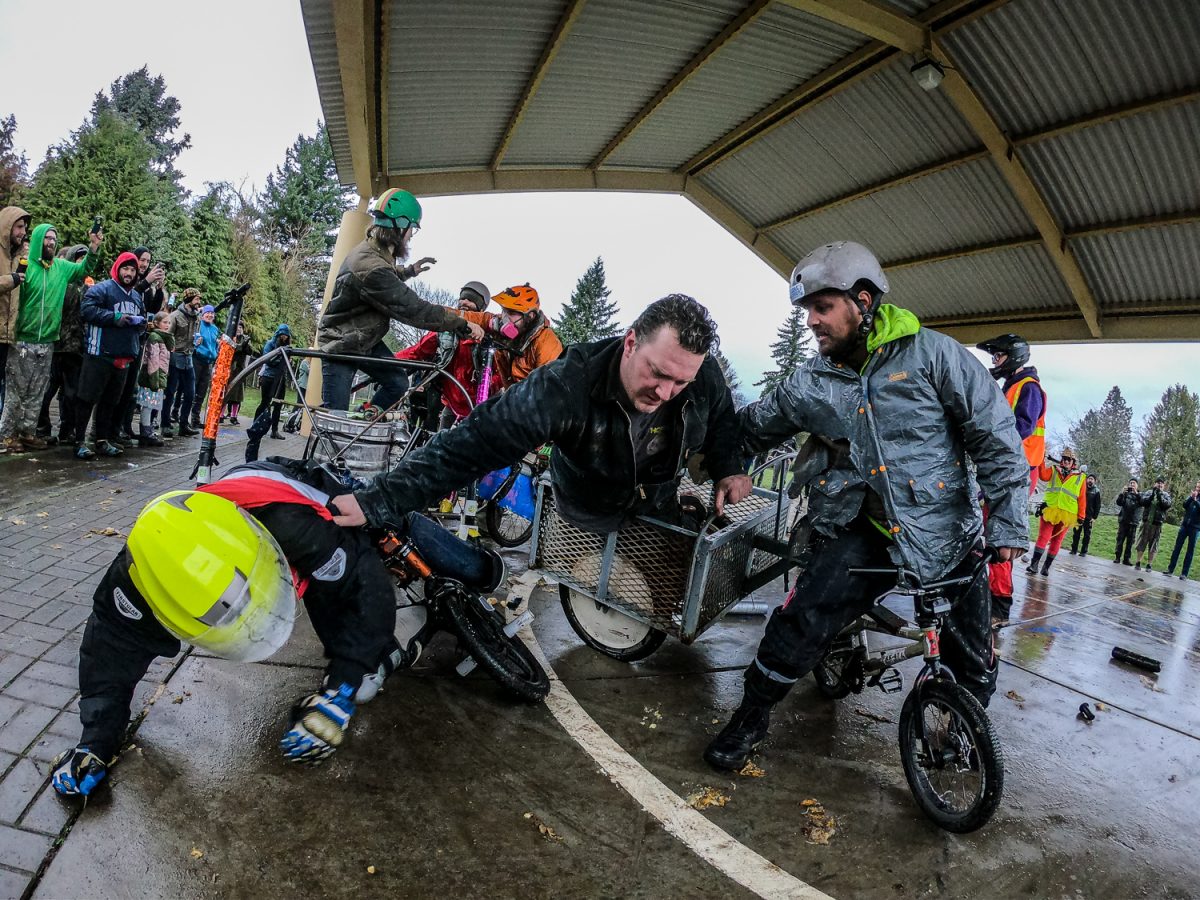 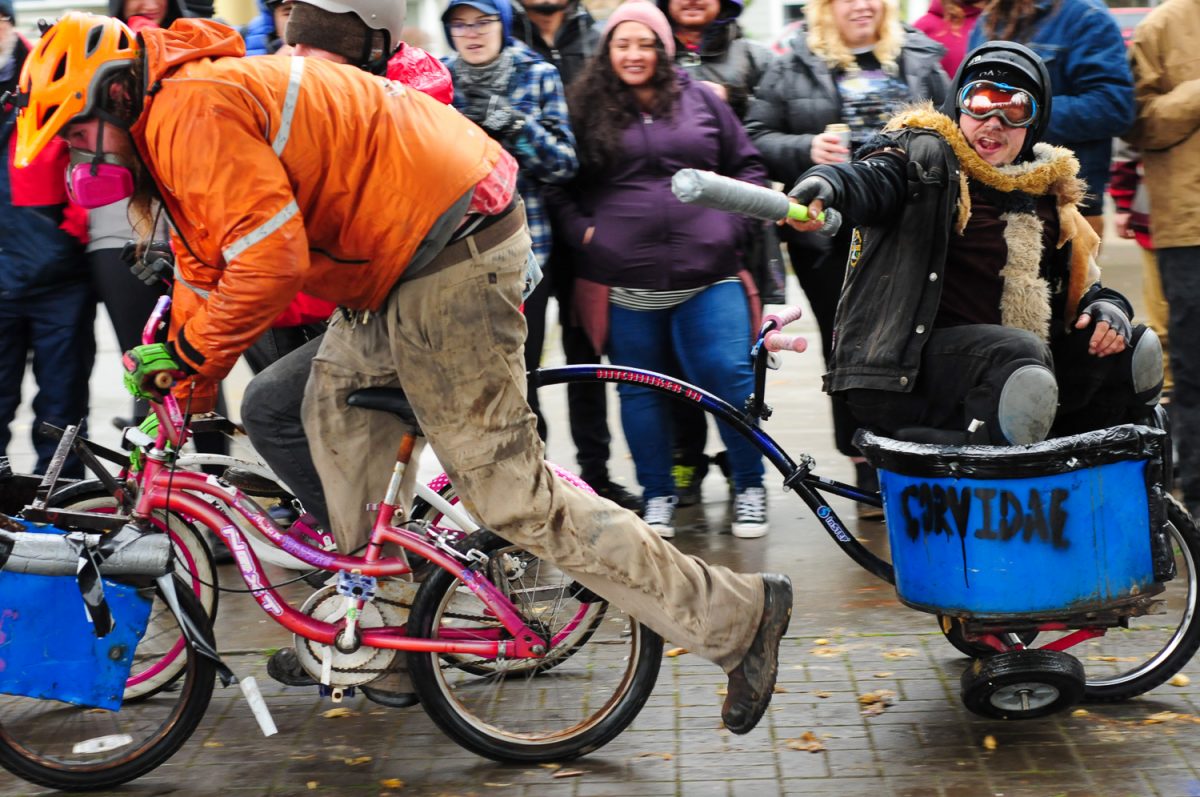 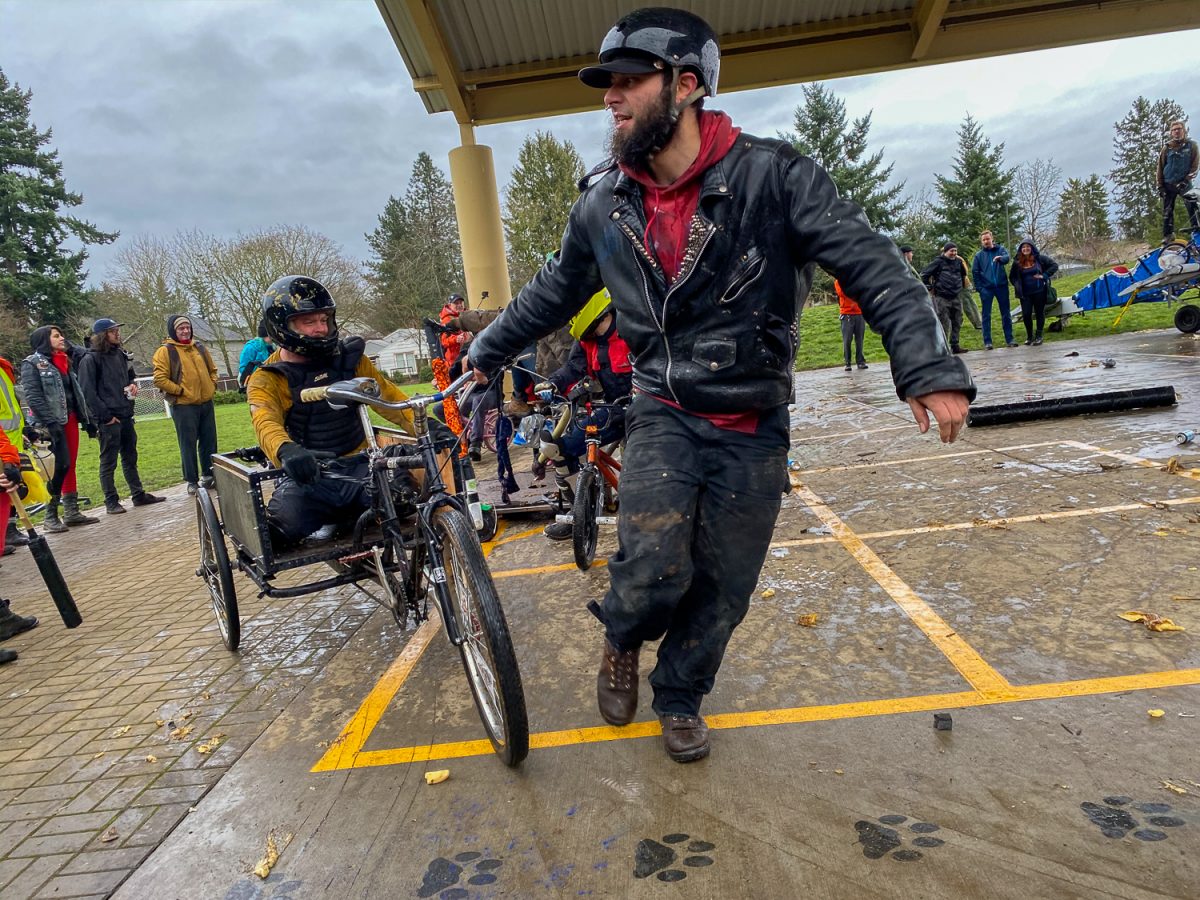 If you were wondering, the plane didn’t last long. Its drive system was not very durable and the chain fell off soon after the battle started. I caught the moment it was damaged beyond repair in the video below:


But good news for Zane and Twitch: They were victorious! 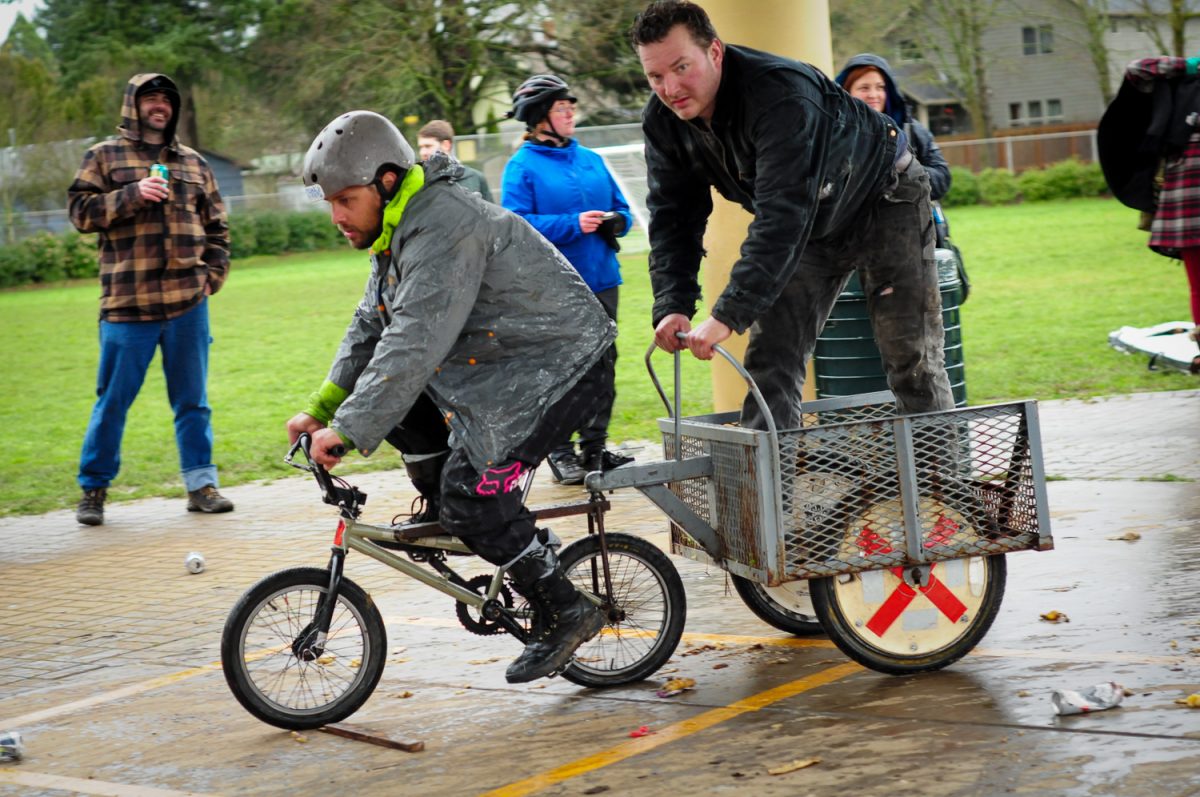 It was such an intense battle. The competitors were absolutely spent and probably very relieved when it was over. 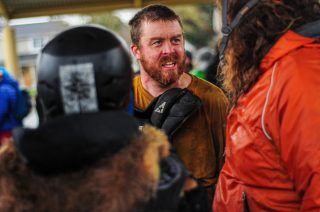 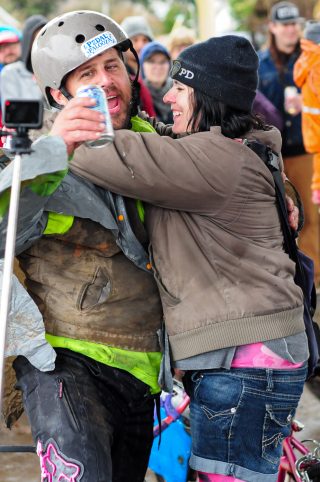 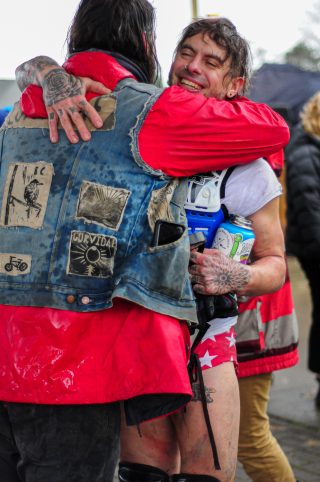 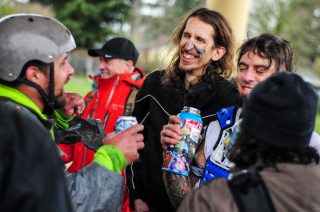 I have so much respect and love for all the beautiful people who show up, create, and compete in events like this. Thanks for keeping Portland’s bike fun spirit alive!

UPDATE, 2/18: Don’t miss this awesome video of the action created by Johnathon Allen/AllenInk:

Thanks for all the awesome photos!

I recommended BP to a coworker as a good bike news source. So what do they do? Pull up BP on their giant 30″ monitor in the office and this story and lead photo come up. They were not impressed. Thanks.

if u work somewhere that this is NSFW, you should get another gig. Because it could be worse, much worse!

Besides, all they need to do is scroll down a bit to realize there are other more substantial stories.

Chris I
Reply to  Buzz

Maybe he works at a pre-school?

Just FYI D’Andre, BP has always and will always cover much more than just typical news stories. This site is a reflection of the community and whatever is happening around bikes/active transportation in our community — NSFW or not! — it will get covered here.

Some say the ghost of BikeSummer 2002 lives on in Portland. Zoobomb is here to say it never really died.

D’Andre Muhammed
I recommended BP to a coworker as a good bike news source. So what do they do? Pull up BP on their giant 30″ monitor in the office and this story and lead photo come up. They were not impressed. Thanks.Recommended 1

If your coworker is offended by the sight of some dude’s legs … Portland may not be a good place for them.