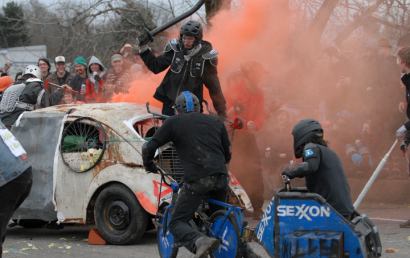 The seventh annual Mini Bike Winter ruled the streets of Portland this past weekend. Hosted by Zoobomb, the event showcased one of Portland’s distinct brands of bike fun. 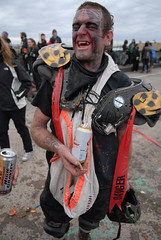 A gladiator after the epic battle.

Friday through Sunday was packed with events — from a panel discussion to a human-powered chariot battle royale. Saturday was the big “Circus Freaks” party downtown and Sunday ended with the Mini Bike Winter Olympics and of course, a special edition of the weekly Zoobomb.

As the reputation of this event has grown, so too has the number of out-of-towners who come to participate and take it all in. This year, groups came from Salt Lake City, Los Angeles, Vancouver (B.C.) and even Boston — and from what I saw, they did not go home disappointed!

Saturday’s Ben Hurt Chariot Wars were epic. The surprise entry was a rusted out Volkswagon Bug, powered by three four guys inside (who worked part Flinstone-style and part pedal-powered) and two gladiators perched outside to ward off invaders. One of the cars builders (the same guys who dreamed up the amazing Hamster Ball last year) said they found the car in a creekbed in Forest Park. 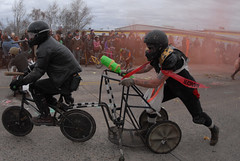 Despite chants from the crowd of, “Flip the car! Flip the car!” no one was able to turn it over. Other competitors, who had the more conventional bike and trailer-as-chariot set up, tried to pull the gladiators out of the car. In the end, the car realized it had an unfair advantage and rolled off. Victory was earned by the defending champions, Lee and J-Ryde of “Team SEXXON.”

Saturday night, a large group of people met at Alberta Park, the first stop in a ride that would end up at the party venue downtown. On the basketball courts at Alberta Park, The Sprockettes kicked things off with an excellent performance. We then rolled to Irving Park where the Vancouver, BC-based B:C:Clettes performed under the illumination of bike lights.

From Irving Park, the ride’s next stop was the Eastbank Esplanade where the Bay Area Derailleurs displayed their masterful bike dancing skills to a very appreciative crowd with the city skyline as a backdrop. The final stop was the Circus Freaks party, where face painting, a fashion show, live music, and lots of dancing capped off an epic day.

I didn’t make it to Mt. Tabor Park for Sunday’s Winter Olympics, so if anyone’s got links to photos or recaps of that action, feel free to share in the comments.

Nice work Zoobomb! You all put on an amazing three days of events.

More photos in my Mini Bike Winter VII photo gallery or sit back and watch the slideshow below:


For more coverage, check the awesome video by Johnathan Allen:

There were four of us inside the bug, not 3, and we all had pedals.

In a post peak oil Mad Max world, looks these guys have the upper hand

the MiniBikeWinter Olympics sunday included bike limbo, a mountain top performance by Kazum, and two new Olympics events, Bike Bowling and MiniCross, which was an all offroad, downhill minibike race through the mud. then we went to the river where people jumped the AquaMini into the freezing river, accompanied by the live rock music! much fun was had by all. here’s some photos:
http://www.flickr.com/photos/umaru/sets/72157623305564245/?page=5

then, sunday night Zoobomb was the Tour Da Bomb, our only official downhill race. this year, the rules limited the racers to riding non-souped up kids bikes, i.e. Pyle Bikes, the janky bikes we have on the Pyle, steel rims, 16inch wheels, knobby tires, and coaster brakes only. Only 8 racers had the guts to do it. Cupcake took 1st, Mechanic Mark 2nd, and Guardrail 3rd!

and one of the people in the bike car was a LADY, not just guys. a pretty badass one. just wanted to mention Julia (which is also the official name of the “hamster ball”.