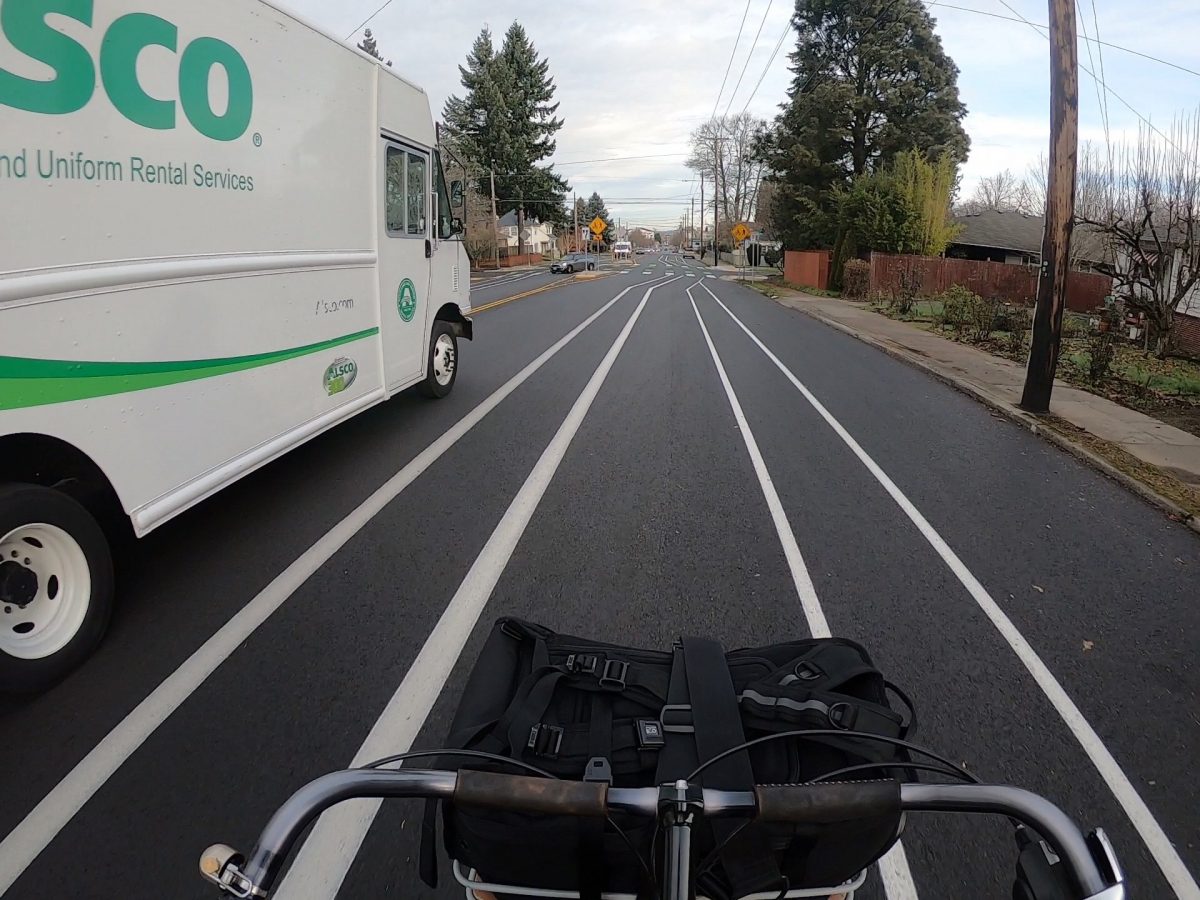 New bike lane in action. This is a still from video you can watch below.
(Photos © J. Maus/BikePortland)

The Portland Bureau of Transportation has finished their re-paving and re-striping of North Denver Avenue in Kenton between Lombard and Watts. 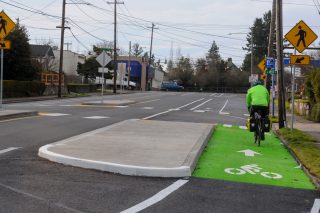 The bike lane moves curbside to go behind a floating bus stop island at N Russet.

The $1.9 million project comes with smooth pavement, wider bike lanes and a floating bus island median at North Russet. Previous cycling conditions on this section of Denver were a standard, unprotected, door-zone bike lane that was adjacent to auto users. The new bike lane remains adjacent to auto users and adds a three-foot buffer zone on both sides. PBOT gained space for a wider bike lane by removing the center turn lane.

As we’ve covered in the past, there was ample community support for a parking-protected bike lane that would have given bicycle users a straight path, away from other road users; but PBOT inexplicably decided to ditch that plan after a few residents opposed the change.

Below is a video riding northbound, followed by more photos: 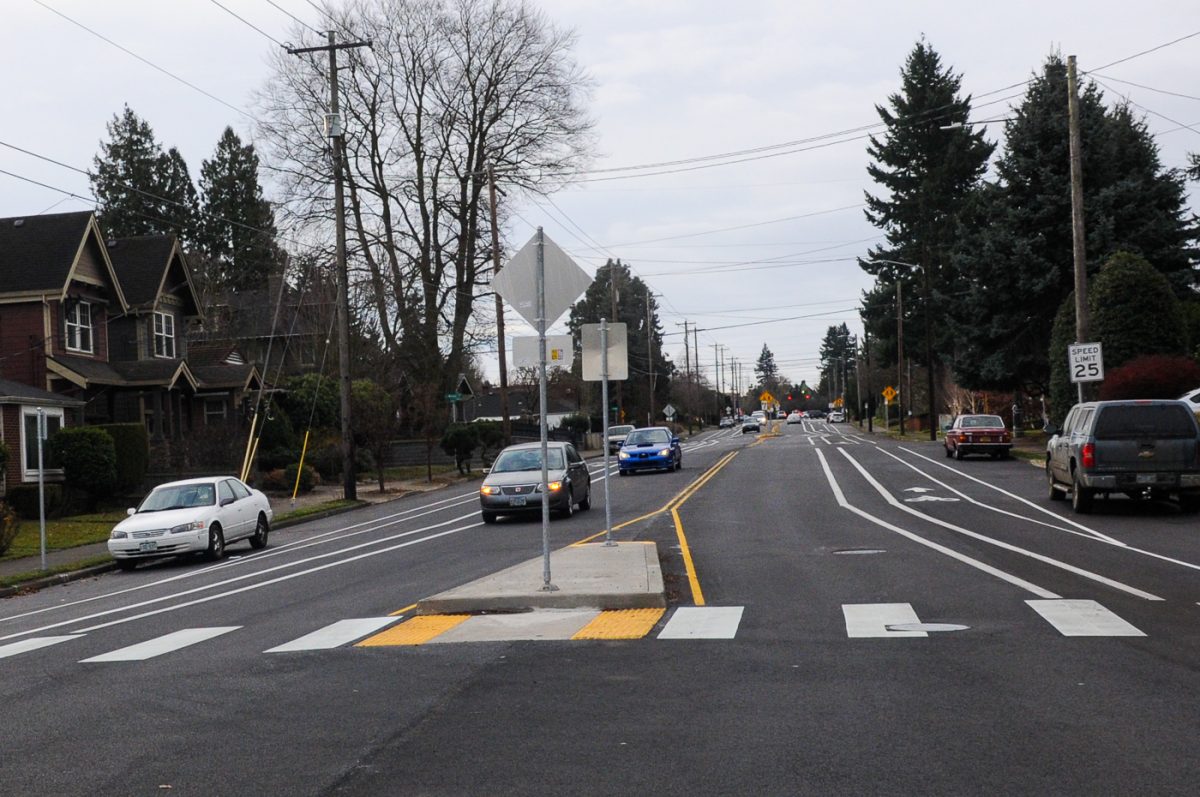 I rode the new lanes on Tuesday. While I appreciate the painted buffer zone, it’s disappointing that a few weeks from the year 2020 we’re still building paint-only bike lanes next to car and truck drivers. As you can see in the video and images, it’s stressful to ride on this street when a large delivery truck rumbles by. The bike lane itself (buffers aside) is also only five-feet wide. That’s not wide enough for social, side-by-side cycling that’s most comfortable when riding with kids, novice riders, or when you simply want to have a conversation with someone.

I couldn’t help but compare this new bikeway to the recently completed, parking and concrete curb-protected bike lanes on N Rosa Parks Way just a mile or so away. We often hear from engineers that consistency and standardization in road design is better and safer for everyone, yet when it comes to bikeways, we have dozens of different designs. And on Rosa Parks, PBOT intentionally made drivers swerve in order to slow them down. However on Denver, it’s the bicycle users who have to swerve every block because PBOT maintained the curbside parking lane. 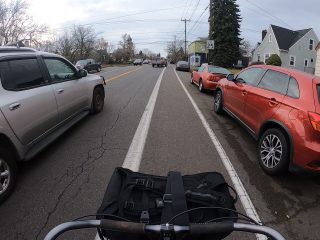 Bike lane on Denver just south of Lombard (a block away from the new bike lanes).

It’s also worth noting that north and south of this section of Denver, riders have even worse conditions. North of Watts in the Kenton commercial district, bicycle riders lose all buffer zones. South of Lombard the bike lane is even narrower (see photo at right).

If we want to make good on the promise of Neighborhood Greenways — which was to build demand for cycling from new riders — we must provide better bikeways on key collector streets like Denver Avenue. It concerns me that with a clean slate to work with, the City of Portland didn’t do more to create a low-stress, all-ages bikeway to connect neighbors to local businesses and other destinations.

Speaking of Denver, a link we shared in this week’s Monday Roundup from Colorado’s Denver included a city staffer pushing back against residents’ parking concerns. “We really have to think about what’s more important,” the employee said in a story about a controversial bike lane project. “Providing safe connections or being able to park your car? And a life has got to be more important than the proximity of your parking spot.”

This is the kind of language we need to hear more from PBOT leadership and staff if we are going to meet our transportation goals.

Have you ridden this yet? How did it feel to you?

Does PBOT now take several feet from the width of a proposed bike lane so they can lay down twice as much paint and call it protected?

Agreed. The title of this piece would be more impactful if it read “first look at painted-only bike lanes on North Denver”. Call a spade a spade.

“…when it comes to bikeways, we have dozens of different designs.”

This says it all. Awkward for regular users, a trap for new riders and visitors. The more exotic the design, the more likely it is to be full of leaves and gravel, and, if it ever snows again, good luck.

It doesn’t feel a whole lot better to me than it was before. Although I do like the one painted zone with the bus island; it makes it easier to take a dutch left when I want to go in the back way to Heavenly Donuts. The design failed to really improve the worst part of this stretch of road, as is typical, the intersection. The southbound approach to Lombard remains uncomfortable to dangerous. (However, the northbound approach is arguably worse because of the weird angle of Denver Ave right next to the old Rite Aid.) I suppose it helps to have the bike lane continue all the way to the intersection- that must be best practice for bike lanes, right? Previously, the bike lane just fizzled out and merged into the right-turn-only lane. On a bike you just waited in the right-turn-only lane to go straight, while motorists waited behind you to take their right turn. Personally, I prefer this to being stuck in a narrow lane with cars on both sides, especially when I’m biking with my kids or dog. However, some bicyclists probably prefer to have their own lane and not have motorists waiting behind them.

I’m interested to see how Rosa Parks feels when the concrete barriers are all done. And if they’ll be painted or reflective or something. I’ve already seen a few cars drive up over them.

This is infuriating. In a design environment where there will be a parking lane and a bike lane in both options, except vulnerable road users are protected under one option, PBOT relented to people who were confused about where to put their trash cans. Heads need to roll at PBOT. We should be demanding change in aggressive fashion. I’m sick of this crap from PBOT. This will do NOTHING for the mode share.

I don’t understand what’s confusing to you. PBOT had the option to protect vulnerable road users by flipping the parking lane with the bike lane and chose to paint lines wedged between parked cars and moving traffic which will do nothing to protect cyclists and only puts them in harms way. This is not the kind of infrastructure that will get more people to use this facility.

Bike lanes buffered by parked cars are not a great solution. I’ve lived with them in the Bay Area. I would fight against their installation anywhere.

You have to go back 20 years to know that N. Denver Avenue, from Interstate in Kenton to N. Willamette Blvd a block south of N. Killingsworth, was designated as “the major N/S bike route” in exchange for the removal of bike lanes from Interstate between N. Willamette and N. Dekum.
A special task force was asked to work with PDC, PBOT, and the BTA to find a way to keep on street parking (i.e. remove legally required bike lanes) at the soon to be built Interstate MAX stations at Killingsworth and Rosa Parks.
I have regretted to this day ever agreeing to this “relocation,” in part because so little was ever done to make Denver Avenue better for bikes. Now this? After 20 years? and on a ROW that is one of the most generous and lightly used in the City?! This long stretch of N. Denver should be a “bike expressway” not just another wide, fast street with some paint. Sad.

I see in the video that some of the intersections have chalked-in dashed lanes. Do you know if the city is adding dashed painted white lanes or dashed green lanes? And what are they doing for the busier intersections?

So far I have observed:

1) cars repeatedly parking in the northbound bike lane immediately N of Lombard, which is now a no-parking block. Attribute this to heedless motorists and to bad design and signage

2) cars repeatedly drifting into the buffer zones going around islands to straighten out the curves.

3) I suspect that the lane striping is not going to hold up well since cars are driving over so many segments of it.

It’s for the most part better than what was there before, that’s about all one can say.

So, aren’t the cars supposed to be on the other side?

After using this stretch and Rosa Parks frequently I am good with PBOT not flipping the bike lane and parking on Denver. At least on the downhill side (northbound). Thing is putting a row of parked cars buffers you from a rear impact or side swipe, but it also can make you very hard for a driver to see with all those vehicles between. Cyclists go nearly the same speed as traffic down Denver, something that I would bet surprises drivers to no end. With a row of parked cars blocking visibility of a cyclist I think it would be a risk of a high speed right hook of a car turning to a side street. I think this would be less of an issue on uphill side where the speed difference between modes is greater. I generally don’t feel more or less safe from through traffic by the protected lane offered by Rosa Park’s compared to previous, it is less noisy. If anything I think the new less straight nature, and the effect the bollards have of making it seem tighter may be the best thing going for the Rosa Park’s design.