This weekend I spent two days in Hood River with my 8-year-old son and his favorite part — by far! — was their new pump track. 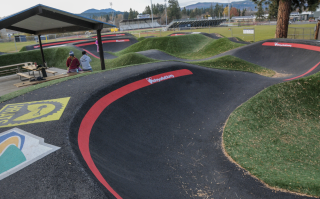 Completed in August 2018, the Golden Eagle Park Pump Track is located in a new park about four miles southwest of downtown Hood River.

A pump track is a small facility usually intended for scooters, skateboards, bikes, or any other type of wheeled apparatus that can handle whoops and tightly banked corners. The idea is that you “pump” your vehicle so that it attains enough momentum to complete the entire track without needing to be pushed or pedaled.

I heard a lot about this particular pump track when it was being built, so I was eager to finally check it out. It did not disappoint. Below is a quick video I shot on Sunday…

Much larger than Portland’s newest concrete pump track at Gateway Green and much smoother than the dirt one that opened at Ventura Park in 2012, Hood River’s pump track (their first) is wide and smooth thanks to a paved design created by renowned builders, Velosolutions.

The Golden Eagle Park Pump Track is large enough that you can create any number of routes through it. In fact, coming up with new lines was how my son spent most of his time. “Follow me dad, I found a new way to go,” he’d say, as he confidently led me around a new route. I loved watching him gain confidence with every turn. The other great thing about it (which is true for most good pump tracks) is that it’s challenging and fun for a wide variety of users — from tiny kids on push-bikes to experts on specially made rigs.

What makes Hood River’s pump track even sweeter was that (similar to Gateway Green) it was made possible only through the fundraising efforts of local nonprofit, the Hood River Area Trail Stewards (HRATS). HRATS volunteers spent months gathering donors and working with Hood River Parks and Rec department. When Golden Eagle Park opened, the pump track wasn’t there. Without HRATs and their local business sponsors (whose banners are displayed on the pavement), this pump track probably wouldn’t exist.

And now I can’t stop thinking about why one doesn’t exist in Portland yet!

These things don’t take up much room, can be built relatively quickly, and they aren’t that expensive. Olivia Ullrich, the HRATS volunteer who spearheading the project said the total budget was around $195,000 ($43,000 of which came from Hood River Parks and Rec system development charges) and was, “offset significantly by donations of materials, machinery, housing for the Velosolutions crew and volunteer labor.” “This was truly a community project and terrific partnership between HRATS and Parks and Rec,” Ullrich added when I contacted her about the project.

I know NW Trail Alliance would love to bring one of these to Portland. It can’t happen soon enough. When we do get one, everyone will be like…

I’m sure the city will get right on it as soon as the ORCMP is complete. By the way, how’s that process going?

There’s no chance air traffic control at PDX will panic over a report of airborne swine.

Portlanders hanging in HR! Jonathan it was good cruising with you and your son Monday! He is getting those creative lines dialed in! (Dog guy on the bmx bike!)

Even Redmond has the new, asphalt-paved Homestead Pump Track. Maybe our big city will get one, someday?!

On a fixie you could hit it the way the pump-track competitions happen, pedals only, no chain.

I used to go to the pump track in Beaverton, it became pretty unrideable and eventually got taken over be RC car drivers. It was a fun place to go in the city while it lasted.

Eichler still has a lot of riders and gets regular maintenance. You should give it another shot.

What could’ve easily been done with all the $$ that went into Gateway Green….