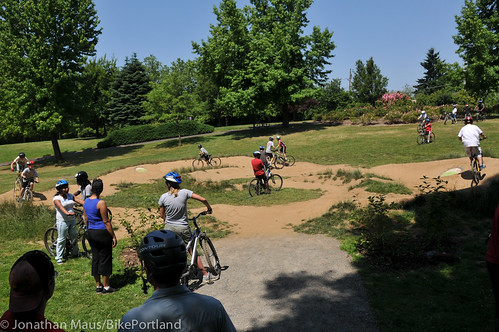 Today in the Hazelwood neighborhood, the City of Portland officially opened the Ventura Park Pump Track — the first of its kind in a Portland park. Commissioner Nick Fish (who oversees the Parks department) came out to SE 117th and Stark for the event, and as he looked out at dozens of young kids buzzing around the track, he said, “We’ve got to clone this!” 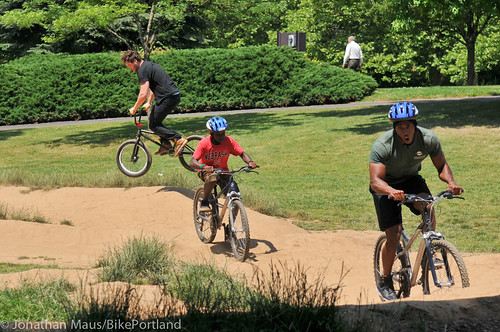 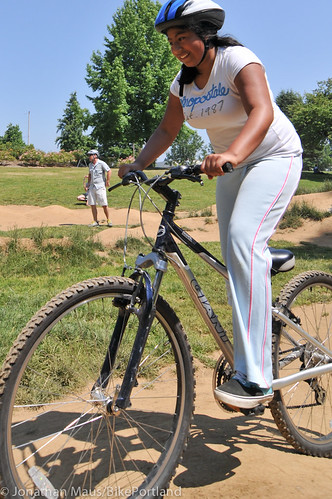 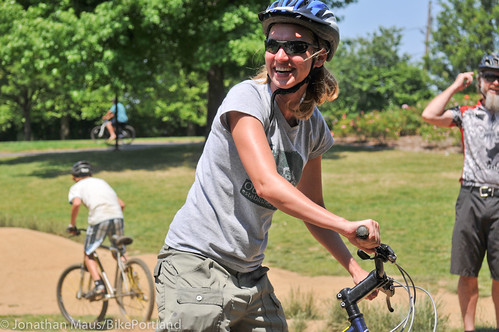 Fish must have been pleased to see a park in East Portland full of activity, with a new feature made possible by a strong partnership with the non-profit Northwest Trail Alliance. The NWTA is the same advocacy group that he left at the altar nearly two years when — after a long and often contentious process — he decided to not improve bicycle access in Forest Park.

NWTA advocacy director and former president Tom Archer touched on that issue during his remarks today. Speaking about the kids camp (which began at the pump track today but tomorrow will pile into trucks and drive about 45 minutes out to Sandy Ridge to access some real trails) he told the crowd, “Most trails in Portland aren’t open to bicycles and we really want to help change that.”

“In a city where bikes are so popular and bike commuter is revered,” continued Archer, “the lack of venues for recreational cycling is unfortunate… We need to provide more opportunities like this not only for our kids, but for big kids like me.”

They don’t agree on everything when it comes to off-road bicycle policy; but Archer and Commissioner Fish know that it takes a working relationship to move things forward. And that’s exactly what today symbolized… 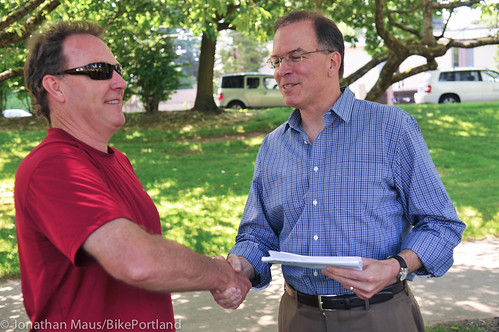 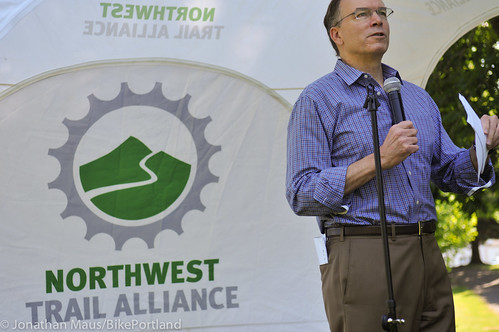 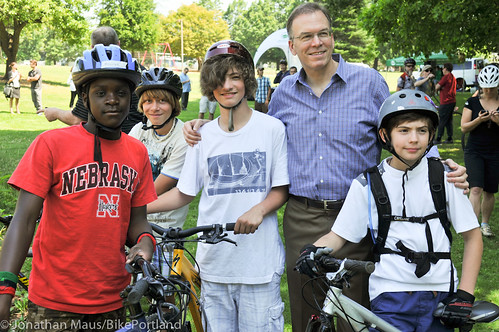 Commissioner Fish pointed out that the pump track won a “Best of the City 2012” award from Portland Monthly magazine. He called the track a “great example” of how his cash-strapped Parks agency can do, “Small improvements with big impact.” Fish also thanked the NWTA profusely. And he should. Without the NWTA’s fund-raising (about $8,000 for the track so far) and 500 hours of volunteer work to build it and make it happen, this never would have happened.

In an unprecedented partnership, the NWTA will manage the pump track and handle all of its ongoing maintenance and construction. Sweetening the pot even further, the non-profit has also proved they can bring in private cash. Local bike part and accessory company Portland Design Works announced a $5,000 donation to the pump track today and the entire staff, co-owners Dan Powell and Erik Olson and sales guy Kevin Murphy, were on hand to see the fruits of their investment. 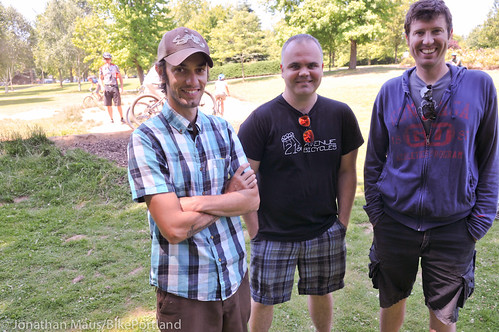 It was my first time at the Ventura Park track and my initial impression was that it was way too small. When you’re just standing there, it doesn’t really look like much. It’s just a few lumps of dirt. What’s the big deal? I wondered. It wasn’t long before it all sunk in. The kids — and the adults — couldn’t get enough of it. “Can we go again?!” I heard one of them yell. After snapping a few photos, I grabbed a bike (thanks Tom!) and tried it for myself. Wow! I had no idea how much I loved pump tracks until I did a few laps. I’m hooked!

Imagine a series of smooth berms and small rolling bumps all connected in a loop. The idea is that you don’t even pedal, you just pump your bike up and down and around in order to create momentum. By pushing your bike into the bumps and turns (using both your arms and legs), you get a thrilling ride and a fantastic, full-body workout. Mountain bikes (with the seat all the way down) work best, and BMX bikes work too. 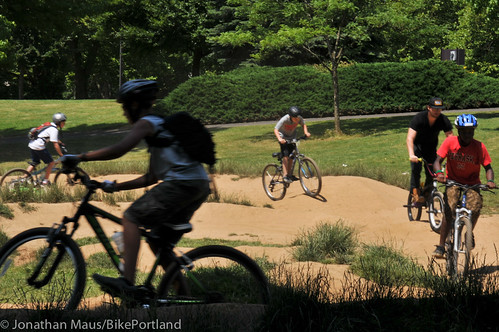 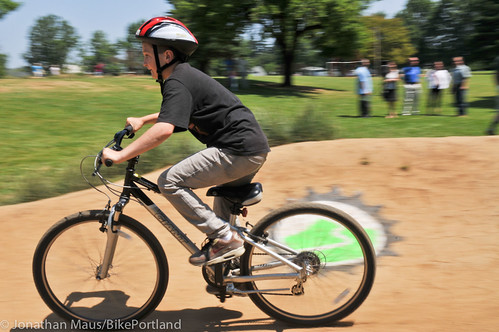 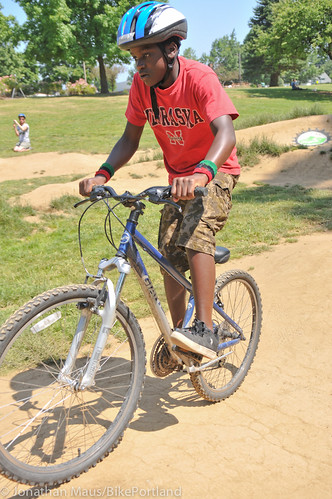 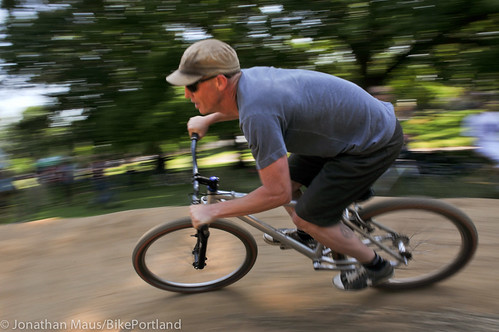 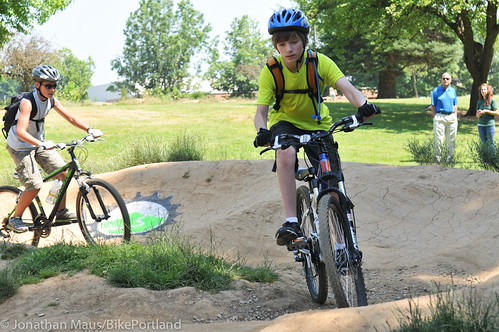 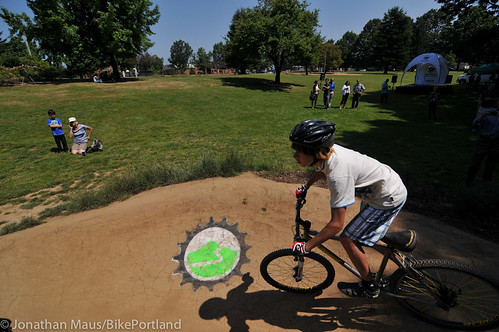 I chatted a bit with Commissioner Fish after his short speech. He likened the evolution of pump tracks to Portland’s experience with skate parks. After skaters were initially villified and found themselves with nowhere legal to ride, activists (led by current PBOT Director Tom Miller) got together, got into City Hall, and eventually created a master plan. Five skate parks later (with more in the works), “And it became normalized,” said Fish. “I think it’s a similar trajectory… In some ways it’s better organized.”

With this first pump track in the books, Emily Hicks, a policy advisor in Fish’s office, said subsequent tracks should be “much easier” to pursue. She said seeing this one be so successful and having precedent for the permitting process will bode very well for the future of pump tracks in Portland.

I think the largest issue is simply identifying locations where these can go. The public buy-in, the volunteers, the non-profit partners, the sweat equity, the private donations — that’s all easy stuff in my opinion. What would be most helpful is if Parks could identify potential pump track locations and then let the community do the leg work. These things are no-brainers. Cheap, fun, popular. Let the cloning process begin!

— Stay tuned for more details on another pump track coming to the New Columbia neighborhood.

It seems small from the pictures. Can’t wait till it rains, it’ll be a blast.

Very cool. Will roll over to this park soon 🙂

why did it take over 10 months for them to “open” this park? we saw video of it open and thriving from September…

I am so pleased with this pumptrack, and so happy the NWTA has worked hard to make this happen.
I reccomend to everyone that you write/ email Mr. Fish and the parks dept. to express your desire for more pumptracks in Portland.
As Jonathan pointed out, this track is small but largely popular.
This was shown to be a issue with crowding at early skateparks, and is here also. We have so much park space available that future tracks should be nothing but larger and expedentially more fun.

Also;
Thank you NWTA for allowing me my personal dream of digging pumptracks in public spaces.
So happy….

Since we didn’t start work on this until the fall (2011), the official opening was postponed until good weather was likely. Also, yesterday was the first day of NWTA’s kids camp, and we wanted to dovetail with that.

This seems quite a turning point. A few years ago there was a pump track built by local kids along the greenway on Columbia Blvd west of Kenton (between Peninsular and Chautauqua Blvd). I loved seeing kids out with shovels building and rebuilding, making the passive green space active and experimenting. Reminded me of what I did as as kid, but alas the city came along and removed it all.

Tom, Dabby (and seesheelbike?), how about NoPo pump track(s)? Since the New Columbia setup is likely not going to include dirt after all, what about Columbia Park just five blocks away? There is an unused section in there that I have always wanted to convert – and it is right in my neighborhood. I can canvass the neighbors and Neighborhood Association. And then there is the ‘dog park’ off Willamette (private I know, but the owners may be willing), and Pier Park, and, and…

Gabriel Park has lots of room! Let’s get an XL-sized track in there!

Brentwood would be awesome, and the neighborhood has TONS of kids on bikes.

Also, we should start a contribution to get Jonathan a camera that can also do video 🙂

Brought my 4- and 11-year-olds out here last night. We got there at 8pm, with the air temp just getting comfy and no other kids on the track. Perfect.

For kids I’d say the lighter the bike, the better on a track of this tiny scale (unless you’ve spent the dough on an expensive lightweight comp bike). My skinny 11-year-old’s heavy non-competition mountain bike was way too heavy for him to pump and maintain good control. He still had fun though. Now begins our craigslist quest for a lightweight BMX bike…

My 11-year-old rode his little wooden balance bike, and he TORE:IT:UP. He thought that his first wipe-out in the dust (there’s LOTS of dust) was so cool that afterward he purposely wiped out another half-dozen times. He rode an hour straight without stopping.

Awesome too that this park is a quick walk from the MAX stop on Burnside. The bigger kids can take themselves there, until one pops up closer to home (Irvington).

We loved it, and I love the idea that more of these may be built. If anybody out there is more of an instigator that I am, and wants to organize an effort to get a pump track at Irving Park, I’ll jump on that bandwagon.

Here’s to hoping that subsequent pump tracks will go bigger…

And since I don’t know dink about BMX gear, if someone here’s got the knowledge and the will to help me source a good, lightweight, bmx beater I’d appreciate the guidance.

Hi Craig, I know this advice is few years late, but if your kids are stil into riding BMX bikes and dig the pump track, there are several BMX race tracks not far for licensed racing. Molalla, Newburg, St Helens, and Eugene are the nearest permanent racetracks in the Portland area. Visit USABMX.com for more info, and https://bmxoregon.com in the racing section for more local info. Feel free to email me for any questions you may have. Cheers, Steve

We are still waiting for these new pump tracks. There are great paved ones in Hood River, Salem, and Redmond, but not Portland? The city that prides itself in being bike friendly? We gotta get kids back to having fun on BMX bikes like when I was a kid. Those who loved bikes as kids, grow to adult bike riders.