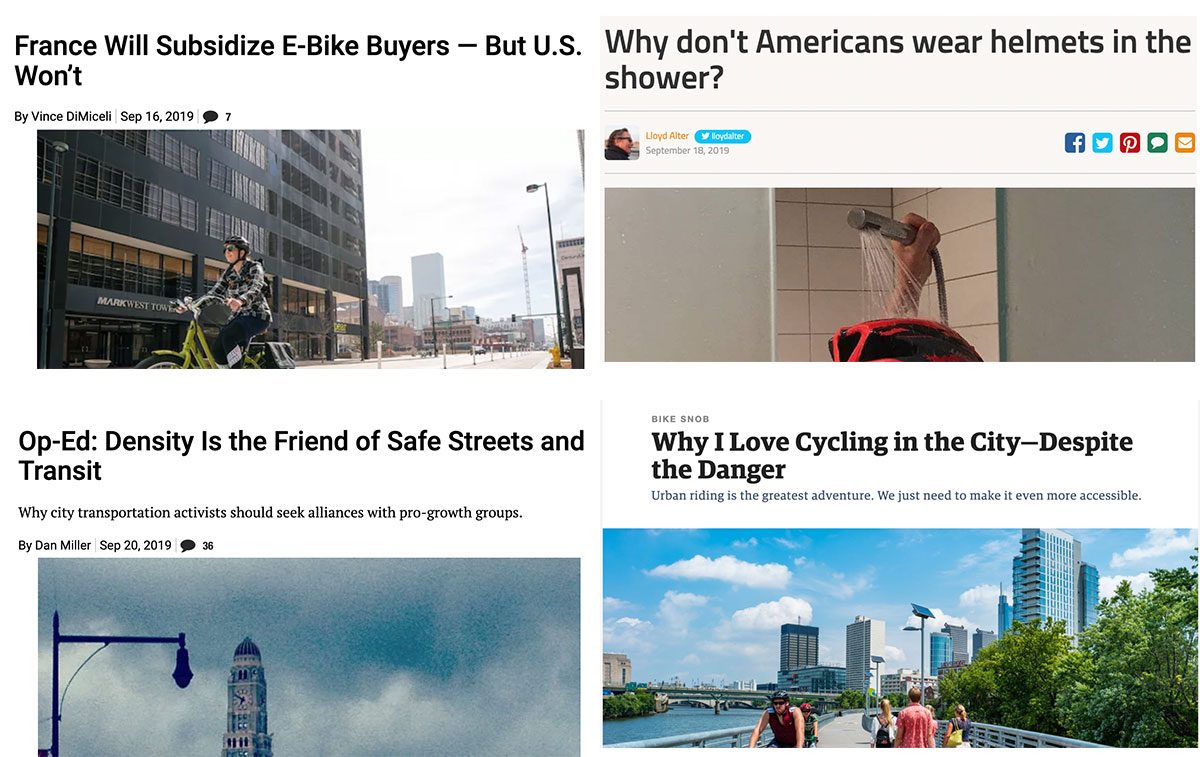 Before we get started with our regular coverage, let’s take a look at the most noteworthy stories we came across in the past seven days…

Battling body image: An extraordinary personal reflection on riding the Tour Divide Race from Alexandera Houchin, an indigenous woman who has struggled with feelings of shame around her weight and uses a bicycle to make sense of her world.

Commissioner Butler: California Governor Gavin Newsom has appointed transportation activist and Toole Design Group consultant Tamika Butler (whom you might recall from her visit to Portland in 2017) as that state’s newest transportation commissioner.

Bike-life balance: Cycling Weekly has a good piece on how cycling is more addictive than ever these days and how to not become so obsessed with your riding and training.

Pence motorcade backlash: Vice President Mike Pence brought his motorcade to carfree Mackniac Island and people are a bit peeved about it.

E-bike subsidies: Widespread use of e-bikes could radically transform the U.S. transportation system and we should be subsidizing the purchase of them like France is doing.

$13,000 e-bike misses the masses: Veteran cycling journalist Joe Lindsey thinks the new Specialized Creo road bike is so expensive that it won’t be accessible to the people who are most likely to ride power-assisted machines.

Shower helmets: I’m loathe to link to yet another article on helmets, but this is a fun one on the relative danger of bathtubs.

Truth about De Blasio: Sometimes it takes someone from outside bicycle advocacy circles to see something so clearly: “New York’s Mayor Claims to Be Progressive but Favors Drivers Over Bicyclists,” writes The Intercept’s Peter Maass.

Why density rules: Solid op-ed from New York City encourages coalitions between transportation reformers and pro-growth groups because “density is the friend of safe streets and transit.”

Mingus Mapps disagrees: Mr. Mapps wants to unseat Portland Commissioner Chloe Eudaly. He told the Willamette Week that he thinks Portland neighborhoods have become “dysfunctional” because it’s hard for him to find a car parking spot in front of his house.

Video of the Week: Open streets inspiration from Ethiopia, where they make major streets and freeways carfree every month across the country and there are calls to make it a weekly event in the capital:

I was recently in France for 3 weeks and was absolutely gobsmacked by just how many e-bikes there were. Not just for commuting/errands but also for rentals in the Alps.

The sheer diversity in types was also amazing – really had no idea there were so many variants – much more than you see here.

Regarding the VP’s motorcade…it is an interesting choice the Secret Service made…perhaps it would have been better just to “helo” into the event like they seem to do in other “hostile” areas…I guess they forgot how protective the locals would be of their auto-free peace and order. Or perhaps the Republican leadership / event organizers forgot about this issue too? [It will be interesting to track long term which is stronger: the islanders’ support for car-freeness or the Republican Party under DJT.]

Ignoring much of the ridiculous drivel from a “veteran cycling journalist”, what responsibility does Specialized have to make $1,000 bikes for people who are capable of justifying $30,000 cars? Does Porsche need to make economy cars to justify their existence? Should Speedvagen have to make $400 commuter bikes because their average bike cost is well north of $7,500?

Middle of the Road Guy
Reply to  PS

Not to mention, there are plenty of other lower cost options. He’d probably be the first to complain if Specialized massed produced them at a lower cost than other manufacturers, putting them out of business.

Specialized doesn’t have a responsibility, per se, to offer $1000 e-bikes, but they will soon do so. The cost of the technology is coming down, and within a couple years $1000 e-bikes will be commonplace. Sure, a $13,000 e-bike is ridiculous, but so is a $13,000 pedal-powered bike, and Specialized makes those too.

Funny the writer of that article mentions that we have $1000 e-bikes today and dismisses them as garbage, yet goes on to rave about the $1400 Aventon Pace 500. Personally, I see snobbery here already: I reject the idea that 500 watts is the minimum power for a viable e-bike. Aventon offers the Pace 350, which has been given a rave review elsewhere in bicycling’s virtual pages, and you can buy one today for $1000. They even offer financing, something few bike makers (electric or not) do. I’ve come close to clicking the “purchase” button on the Pace 350 myself.

E-bike prices will continue to fall. That does not mean should not subsidize them. In fact, I think we should subsidize the purchase of both electric and non-electric bikes, inverting Oregon’s perverse bike tax. But by definition, that subsidy is the responsibility of society and not Specialized.

In fact, there is a range of entities who would be better suited to offer such subsidies: the state of Oregon (which already has a reverse-subsidy infrastructure in place, and also used to offer tax credits for EnergySmart appliances), the federal government (which currently offers tax credits for electric car purchases), or electric utilities (which offer discounts on LED light bulbs and other energy-saving devices).

I’m definitely not in the income bracket that Specialized is targeting with that bike, but I am a little surprised they feel there’s a niche there. Aren’t old-school roadies among the most opposed to e-bikes?

B. Carfree
Reply to  dan

They were, but those old-school roadies are getting older, and slower, by the day. If there’s one thing they agree on, it’s that faster is better and safer. As they age and slow down, they’re bound to not only stop opposing e-bikes, they’ll be hopping on.

Trail Head Credit Union will loan you money to buy ANY kind of bike. I found this out by chance when I entered their lobby on other business. I’m not connected to THCU in any way, not even an account.

I didn’t check out the loan terms so I don’t know how good a deal it is. However it’s encouraging to me as an example of an institution treating bikes as a real thing rather than a toy.

The deal if for up to $2500 with a 12-month term. I couldn’t discern the APR. You can find some details on their web site under the recreational vehicle loans section (https://www.trailheadcu.org/loans/boatrv-loans). I have no affiliation with these folks.

Maybe the Secret Service is trying to flip MI to blue? 😉

This argument comes up from time to time but if anyone should be wearing a helmet it’s drivers and the occupants of their cars! In fact, this very website does articles on this from time to time.
https://www.treehugger.com/cars/Why-arent-driver-helmets-mandatory.html

I came across this argument back in the 90’s and it’s one of those things that’s entirely justified by data and yet people think is completely silly.

Disclosure: I wear a bicycle helmet when commuting for personal safety but tended not to wear them on slower paced rides or out of traffic until my kids got to be of riding age. Since I require my kids to wear helmets when riding, also required by Oregon law, now I also wear a helmet on rides I otherwise wouldn’t as an example to my kids.

I like this in BikeSnob’s piece: “to ride a bicycle in a city is to immerse yourself in a vibrant and diverse human habitat—it’s like being a SCUBA diver in a coral reef (albeit one where the apex predators are cars and not sharks …)”

Increasing vehicle registration fees and/or gas taxes to subsidize e-bikes is an excellent idea. A proper e-bike share network may give regular folks a taste of how much fun they are and how they are a legitimate car replacement for 95% of trips people take.