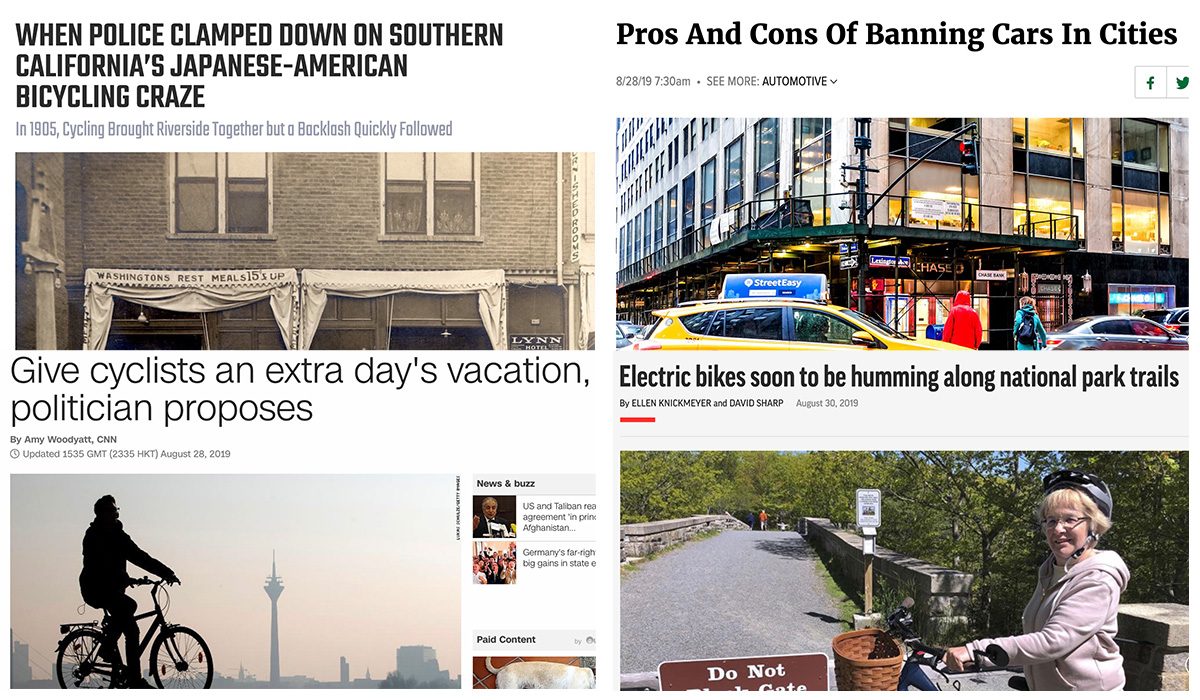 
Welcome to the week. Hope the day off treated you well (if you got one). Before we get started on yet another scintillating week of news and issues, let us not forget the most noteworthy items we came across in the past seven days.

National parks open up: Trump’s Interior Secretary issued a sweeping order this week that said every trail and road on federal park land that is currently open to bicycles must also allow electric bicycles.

History of profiling: This is a fascinating story of how police used bicycle laws to target Japanese-Americans in California at the turn of the 20th century. (The author’s book about mobility and race looks worth a read too.)

Bikes rule in AMS: As someone who only walked the last time I was in Amsterdam, I can definitely relate to the tensions between foot and bike users in the world’s cycling capital.

Lease it: The largest bike maker in The Netherlands is set to launch a program where users of company bicycles (a popular option, due to tax incentives) can lease-to-own a bike for just 5 Euros a month.

Sad or funny? The Onion strikes again: This time they look at “the pros and cons of banning cars in cities“.

Birth of fat tire flying: A mountain-biking pioneer marks the date 40 years ago that motorcycle-inspired “fat tire” bikes were born.

VZ’s west coast problem: San Francisco is the latest west coast city where Vision Zero is not having the intended impact.

Bike time off: A German politician knows that regular bicycle riders are so much healthier business owners should give them extra vacation time.

Transit FTW! Great news from Phoenix, Arizona where, despite a push from a Koch-funded group, voters overwhelmingly supported a light rail extension.

Drive less please: I love the very reasonable yet powerful and convincing tone of this NY Times article about how we can make a huge impact on greenhouse gas emissions if we just drove a little bit less.

Women short-changed: Streetsblog reporter Angie Schmitt shares a list of ways our transportation system is biased against women. Any surprised for you in there?

Tweet of the Week: ODOT could use convincing about this tweet from active transportation advocate and WashDOT staffer @BarbChamberlain:

A terrible downside of banning cars in cities: “Could throw off global warming predictions scientists worked so hard on.”

Strange that in the e-bike article they mention max speed assist but not the max assist power… as most of a MTB race likely happens under 25km/h and the max power provided is what would actually dictate the advantages provided.

“no throttles are allowed in competition and definite rules will govern how much extra wattage a racer’s e-bike can provide. The motor can’t kick in more than 250 watts, for instance, and electric speeds must top out at 25 kilometers per hour (about 15 mph).”

Oh actually that was another article, my mistake. I tried to look up the UCI rules on e-bikes, and instead found an article about how licensed UCI riders will be punished for competing in any e-bike competition not run by UCI. Bike racing orgs tend to be fairly punitive.

Nice computer graphic from “Toronto near miss analysis” of before/after intersection radii…back in the analogue days…we used flour to do similar analysis. 😉

Re: allowing e-bikes on any National Park trails where bicycles are currently allowed …

On the one hand, I don’t like the idea of electric bikes on “trails”, if that means backcountry singletrack.

On the other hand, that’s mostly not what this is about. There are almost no such trails in the National Park system that are open to bicycles; mountain bikes are prohibited from nearly all these trails already. So the concern raised in the article about hiking in some remote corner of Utah and suddenly having an e-bike coming down on you at 20 mph is facetious, at best. NPS has lots of paved paths that are open to bikes, but the most trail-like dirt I’ve ever ridden on in a national park would be the jeep roads of Death Valley (which are also open to actual Jeeps). So e-bikes were already allowed on them.

One disturbing wrinkle that the NPS’ new edict apparently allows Class III e-bikes, which are prohibited even on many urban MUPs, let alone National Park facilities. Then again, given the e-bike industry’s penchant for promoting 28 mph Class III rigs as the logical choice for anyone with the money, not surprising. So much for my idea (and I say this as a likely future e-bike owner) of limiting pedal assist on Class I and II machines to 15 mph, rather than 20.

I’m going to Acadia next month with little kids. I’ll report back on the e-bikes I encounter on the carriage roads. I’m guessing it won’t be a problem.

I don’t get why speed traps have a bad name. They keep drivers’ speed down. They make money for their city or county. What’s not to like?

I know AAA has “automobile” in their name, and therefore must be on the wrong side of every issue, but they do advocate for road safety. Regional AAAs are nominally independent from one another, and I could find no suggestion that any AAA opposed red light cameras, and quite a bit of support for them.

>>> AAA recommends putting red light cameras in areas that have a pattern of crashes, with local law enforcement officials directly supervising the cameras. <<<

Dan A
Reply to  Chris I

No, just the earth.

Most of the article about how our transportation system is set up for men was really about how it is set up against children. Sadly, Americans love their cars more than they love their children, at least that’s a reasonable interpretation based on their behavior, imo, so this will likely continue until we finally put an end to the car era (or it puts an end to us by fueling climate change too far).

That said, I encountered a blind spot regarding the anti-female set-up of US transportation a couple weeks ago. I was southbound on the Coast Starlight train. As we stopped for a brief break in Klamath Falls, I chatted with a woman who lives in Chico. She was going to ride all the way down to Sacramento and then return to Chico via Amtrak bus in order to avoid walking home in the middle of the night; the train goes through Chico a 3:00 AM or some such.

That would never occur to me, but I’m a big guy, not a slightly-built woman. That train trip is long enough without adding another six hours to it at the far end.

Hello, Kitty
Reply to  B. Carfree

I’m not sure if “blind spot” is right… It may simply be impossible to create an interstate train route in which every stop is at a convenient time of day.

B. Carfree
Reply to  Hello, Kitty

I meant that the issue of what time of day a train (or bus, or whatever) arrives in town was a personal blind spot for me. That’s one of the many wonders of being big, white, male, reasonably affluent and too stupid to know where not to go.

That said, there are things that transportation companies can do for the smaller cities that get middle of the night service. Even arranging for some police patrols at the expected time of train/bus arrival/departure would go a long ways and wouldn’t cost much.

But who am I kidding? I can’t even get the Eugene cops to spend a few minutes on our potentially wonderful riverfront bike paths or show up to arrest the thief who sat 100′ from it for three hours laughing at the prospect that he would face any consequences.

9watts
Reply to  B. Carfree

Taxi in Chico would be a lot cheaper and easier. Or does Chico not have taxis?

9watts
Reply to  B. Carfree

Why not call a Taxi in Chico?
It has to be cheaper and a lot quicker.