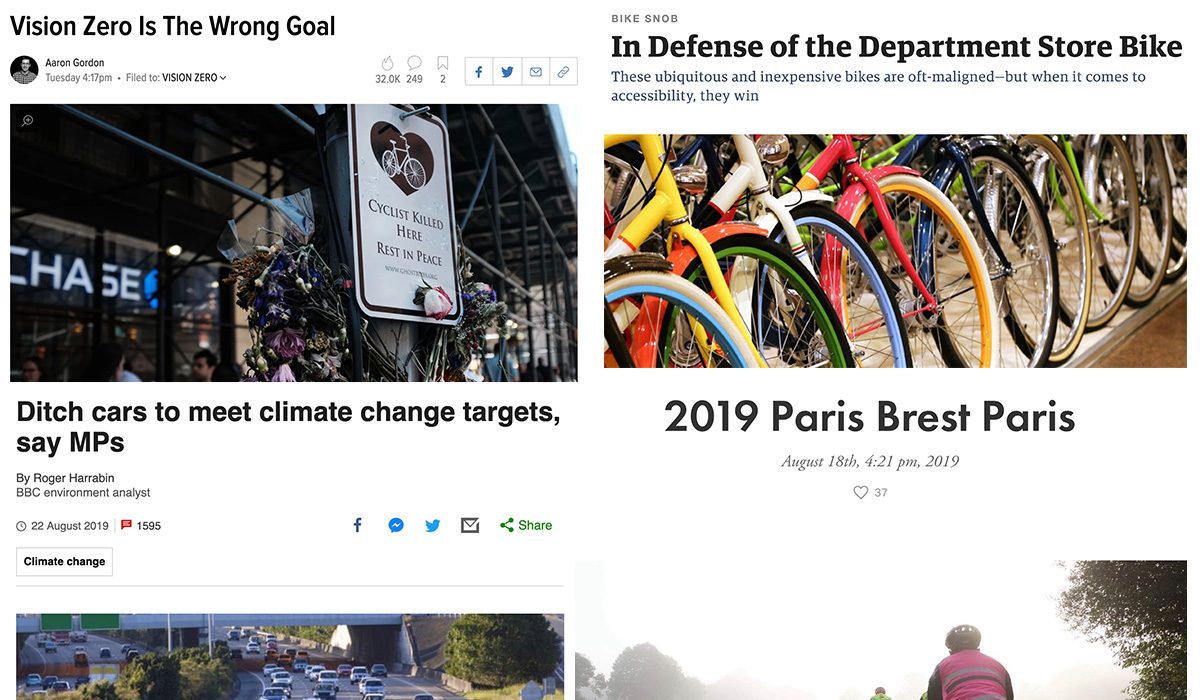 This week’s Roundup is brought to you by the Tour de Lab, coming to a brewpub near you on September 1st.


Goals matter: Aaron Gordon argues on Jalopnik that Vision Zero is failing to stem the tide of cycling deaths in New York City because it focuses on people who die instead of getting more people to ride.

No duh: A new report from British MPs clarifies that the key to the future health of cities isn’t more high-tech cars, it’s more people using buses, bikes, and their own two feet.

Toy bikes good? The venerable “Bike Snob” does the unthinkable in his latest column: He defends department store bikes.

What’s Paris-Brest-Paris really like? PBP is a legendary 750-mile cycling event. Portlander Ryan Francesconi completed it this year and shared a poignant and captivating recap of his journey.

12,500 spaces: The city of Utrecht in The Netherlands has opened the world’s largest bicycle parking facility.

Tactical urbanism FTW: Toronto is finding out how effective and quick street changes can be when pilot projects are allowed to take hold.

BOD: A bike-friendly residential development in the Lloyd gets a nod in this Forbes article on the boom in bicycle oriented development.

Car blindness: Do you or someone you know suffer from car blindness? Please read this Medium post and seek help immediately.

E-bike revolution is here: OPB checked in on how the e-bike boom is playing out in Portland (and strangely referred to it as “micromobility” which I don’t usually associate bicycles with).

Why e-bike? “Riding grew harder as I grew older. Then I got an electric bicycle.” A NY Times opinion writer shared her story of electric bike enlightenment.

Gov Brown’s secret plan: Oregon Governor Kate Brown considered taking executive action to crack down on sources of GHG emissions — including stronger regulations on light-duty trucks — according to reporting from the Salem Reporter.

Free transit: I’m not sure what’s more intriguing; the fact that the entire country of Estonia adopted free public transit or the fact that The Economist thinks it’s a good idea.

Video of the Week: Hasan Minahj of Patriot Act explains why your transit sucks:

Much(?) of the Estonia article is behind a paywall, but it does seem like a worthy objective, and the fact that Randy O’Toole’s head might explode is just icing on the cake.

On two subjects: I have an alternative “car blindness;” I look at a car and if I’m cycling, no longer see a human being inside.
Paris-Brest-Paris: A client of mine rode it in 2003 and 2007. He is French on one side of his family. His father and he were flagging a cab after the ride to get to the airport in Paris. Cabbie sees the bike bag and starts talking “Paris-Brest?” He flipped down the visor in his cab to show the picture of his own finish some years before.

I was in Vancouver BC over the extended weekend, and was very impressed with the amount of separated bike infrastructure they had, as well as the number of people cycling for transportation. But the most interesting thing is that of the hundreds of people I observed cycling in all parts of town, I did not see a single Ebike. The age range of those cycling was much wider than I see here in Portland, and the town is at least as hilly .but no Ebikes. I even saw several Ebike stores that look kind of deserted. The whole time I was there I racked my brain for why this could be, but the only thing I could come up with is that our poor diets and health care system has left more Americans in such bad shape that they can’t get from place A to B without an electric assist.

I’m not so sure about the lazy American theory:

Maybe the lazy Americans are descended from lazy Dutch immigrants.

I live in Vancouver, BC and see plenty of e-bikes here 🙂

Bikes are totally part of micro-mobility! The whole point of the term is that there are a variety of vehicles now that have in common that they are not much bigger than the human body (therefore more space-efficient), and they don’t go very fast (typically no more than 20 or 25 mph at the most). Bikes, e-bikes, scooters, electric wheelchairs, etc all fall into the category, and I’m sure people will continue to invent more.

If you double the number of vehicles, and halve the speed, you get the same throughput.

I love those illustrations showing how many cyclists you can pack into a vehicle lane if only everyone rode in a syncopated and coordinated manner, and didn’t mind riding really close to one another. I think realistic bike density is 2-4 x car density, and probably 1/20th truck density.

Has an Minahj has a great show. If y’all like the one in the link, I encourage y’all to check out his other episodes.

The Paris-Breast-Paris write up is awesome. I loved following their adventures on instagram. BRUTAL.

In Bike Snob’s piece, he links one of his own tweets where he implies that bike shops won’t let you return a bike. Later he uses the option of returning a department store bike as one of their benefits.

I’ve worked at two bike shops, and at both of them there is a no-hassle return policy for all merchandise including bikes. Maybe “no returns” is an east coast thing?

Bike Snob also left out one thing–department store bikes are far better quality than 20-30 years ago. The high end ($200-$400) of them , at least, are as good as most entry-level bike store bikes, they just lack competent assembly which accounts for @$100 of the cost of an LBS bike, as well as availability in multiple sizes. I have been a working mechanic since the early 70’s bike boom and know what I’m seeing–and wish I didn’t!

Utrecht Fiets Parking: wow, and I remember the old “improved” bike garage…and I am impressed at the new station. Though I wonder if the Dutch have reached the “peak bike garage” size now that you may need a pocket Brompton to reach your trein or bus. Even with the direct connection to the track platform. [I have long thought that the biggest pro transit / pro bike design change that PDX airport needs to do would be install a direct security gate from the MAX stop to the regional flights…vs. the long 20 minute looping walk]

UTRECHT Bike Garage: Their ~$2500 cost per bike stall is not too bad when you consider that is similar to the barebones price per stall of the Mini-Bikestations in SoCal… I helped design and operate….and much more affordable than the beautiful BUT flawed DC Bikestation that came in at $30k to $40k per stall due to sever site constraints and architectural review and being DC.

I had a neighbor who saw me biking around, and said that he had a mountain bike but didn’t ride it because the chain kept falling off and getting stuck. I offered to fix it up for him, and he brought it over. It was a super-heavy department store mountain bike with a triple chainring.

The problem was that his middle chainring was mounted incorrectly, so that it was too close to the big ring, leaving a big gap between the middle ring and the small ring for the chain to fall into. He could only use the big ring and the small ring, and any time he tried to shift between the two, the chain would fall in the gap and get thoroughly wedged in there. I thought it’d be no problem — someone had just put the middle chainring on backwards and I would just need to unbolt it all and reinstall it correctly. Grabbed my allen wrench and…..there’s nowhere to put it. The entire chainring assembly was welded together, with the middle ring in there backwards, and welded onto the crank. As best I could tell, he would need to replace the cranks to fix the problem, assuming that the ‘bottom bracket’ didn’t fall apart as soon as the crank was removed.

One of my coworkers showed up to work on a bike a week or two ago, I was psyched to see someone else start cycling to work. I took a gander at his bike and helped him get a few things adjusted, just a cheapo department store bike. Hopefully he keeps on riding, I know he got a flat, haven’t seen him riding since.