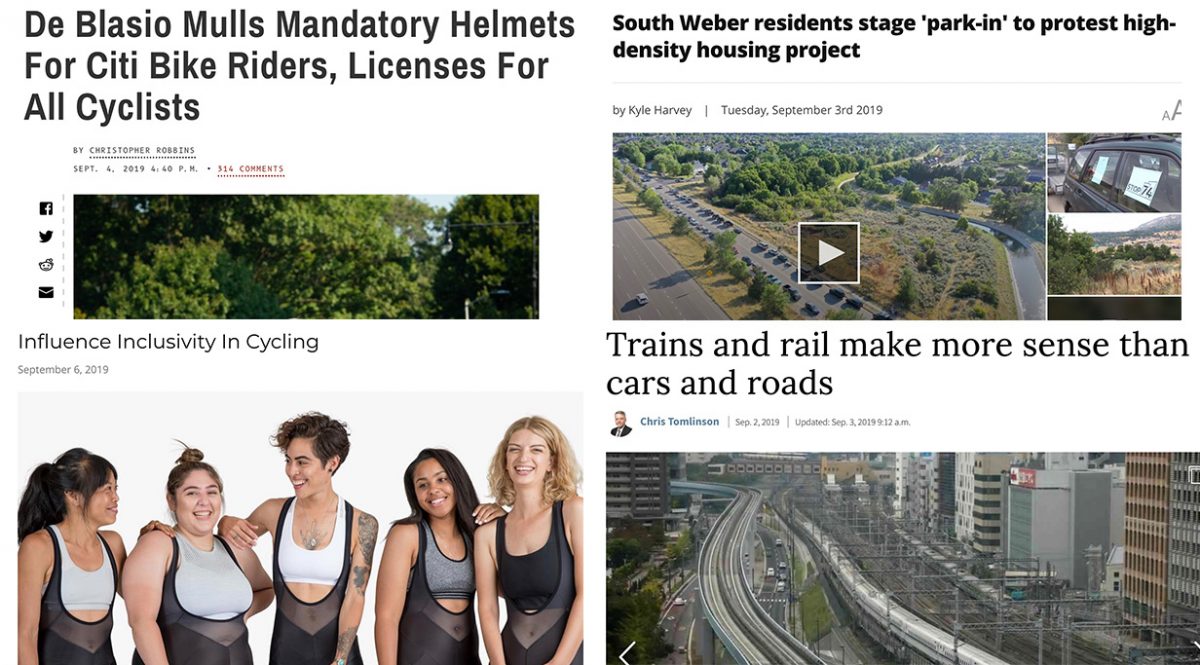 This week’s roundup is brought to you by Harvest Century, the last major organized ride of the season which comes to the beautiful roads of rural Washington County on September 22nd.


Welcome to the week. Here are the most noteworthy items we came across in the past seven days…

“Little concrete evidence”: Turns out when researchers actually look closely at the “distracted pedestrian” phenomenon, it’s not really much of a thing at all.

Untoken influence: Bike blogger Christina Torres is calling on the bike industry to make a bigger effort at empowering diverse influencers around their brands.

Novel protest: People who live in a small Utah community are so afraid of a new multi-story residential tower they staged a “park-in”.

Auto emissions omissions: Streetsblog breaks down climate change plans from Democrat presidential candidates and points out the lack of engagement on transportation issues.

Questions about the climate: Instead of straws and electric cars, here are the questions about climate change we wish the national media would be asking candidates about.

Kids in cars: Automakers care enough about problem of children being left in hot cars that they’ve agreed to install sensors that warn people of their presence.

Oh how the mighty have fallen: Once an inspiration for bicycle advocates nationwide, New York City is now a laughingstock due to a mayor who has no clue what he’s talking about.

Amazon’s streets: A deep dive on how Amazon exploits a system of package-driving contractors to avoid responsibility for traffic crashes.

Japan > Houston: You know times are changing when the Houston Chronicle publishes an op-ed that touts investment in trains and rail because, “building wider highways makes little economic sense.”

Culture and traffic safety: I generally agree with this perspective from The Urbanist that culture is more powerful than budgets when it comes to making streets safe.

Re: Texting while walking. It’s not hard to figure out that’s it’s not that dangerous. Just look at the police and news reports of pedestrians getting hit 77% of them this year in Portland the driver was at fault. People talk about all the pedestrians that aren’t paying attention and step out into the road all the time but none of them ever have a story of one getting hit. If it happens all the time and they aren’t getting hit it follows that it’s not that dangerous. I think drivers forget you have other senses while walking and a much better line of sight.

Middle of the Road Guy
Reply to  idlebytes

Or they did not get hit because the driver was attentive.

Chris I
Reply to  Middle of the Road Guy

I actually agree with you here, especially based on my experience driving around SE Portland late last week. I rarely drive in inner-SE, and within about a 2mi stretch, I had to either brake quickly or change lanes in a very short amount of time to avoid:
1. Woman crossing against the light on Stark while eating ice cream cone.
2. Man walking directly in front of me (just 10ft ahead) on Hawthorne to open his car door into the very narrow right lane.
3. Woman PUSHING HER BABY STROLLER INTO THE ROAD against the light on SE 11th, as several vehicles sped towards her, while staring directly at us.

I still firmly believe that the vast majority of crashes are the fault of drivers, but there is some baffling pedestrian behavior out there.

Dan A
Reply to  Chris I

I, for one, have grave concerns over people walking while eating ice cream.

mid
Reply to  Chris I

We are in agreement here!

Like most issues, it’s not entirely one thing or the other…but a combination (not equal) of both.

idlebytes
Reply to  Middle of the Road Guy

Obviously it’s not all one group or the other but the numbers suggest drivers are at fault more often then not. Also if inattentive pedestrians are only not getting hit because of attentive drivers then people would be getting hit every day in this city cause there’s plenty of both.

Chris couldn’t you have created a similar list for the bad drivers you encountered in the same 2 mile stretch? I mean I live around there and there’s plenty of drivers that break hard and turn without signalling, pull out into your lane going way to slow, or drift into your lane all which require you to brake quickly or change lanes. Are you just remembering the bad pedestrians because you’re blind to the bad drivers?

Chris I
Reply to  idlebytes

I see bad and dangerous driving all of the time. It is a scourge on our society.

I was just appalled because I used to firmly believe that nearly all pedestrians were concerned about their self-preservation. I think that certain parts of Portland are safe enough now that certain people have become complacent, or even emboldened to just walk into the street into moving traffic.

idlebytes
Reply to  Chris I

Almost like the streets are for all road users and Portland has started taking them back from the dangerous ones. I mean I wasn’t there for all your examples but it sounds like you had plenty of time to stop or avoid these people. Especially that last one who wasn’t staring you down just keeping an eye on the cars to make sure they were going to stop. That’s something I do all the time even when I have the right of way because people frequently don’t stop.

Chris I
Reply to  idlebytes

Yes, and I saw a bunch of people driving 15mph over the speed limit on the interstate this morning, but no one got hurt. That doesn’t make it acceptable.

idlebytes
Reply to  Chris I

I didn’t say it was acceptable. I will say though that it is less dangerous and of less concern then those speeding drivers you saw. That’s the part I don’t get about your post. You list out a bunch of irresponsible pedestrians none of whom got hurt and rarely even hurt themselves from such actions, while irresponsible drivers are killing on average 1 person a day in this state. Seems like your focus is a little skewed.

Fixed that John. Thanks.

The article on the Dems flailing policy stance on auto emissions is nice. Of course there aren’t serious in-depth proposals, that would invariably upset the very voting bloc they need to win the election. How much is their footprint regularly, and during the Presidential campaiagn? Take them seriously? No way in hell.

Yes of course, Trumps plan that is actually rolling back standards is much better isn’t it?

I don’t support the President’s plan in any fashion, and I’m conservative for the most part. Definitely didn’t vote for the man either. Also, I apologize if this came off as a partisan attack, it wasn’t. I don’t discriminate between the two parties, abhorrence is the best word for them. Just pointing out the fact that the Dems don’t have a solid plan, no candidate goes into specifics this early in a campaign for starters since it pigeon-holes them into a corner. Simply put, asking people to make sacrifices takes guts, and we don’t sacrifice much in our lives unless it’s yanked away. I think Charlton Heston’s long-ago comment really should apply more to the automobile in this country than firearms, or at least equally.

“Also, I apologize if this came off as a partisan attack, it wasn’t.”

By what wild stretch of the imagination was that *not* a partisan attack?!

It’s obvious GNnorth is saying both sides kinda suck. Which they do. And in fact, as an actual real liberal I might be more disappointed with the cowards and posturing hypocrites of the Democratic Party who actually betrayed me, than with the Republicans who never pretended to represent me in the first place and always predictably were what they were. The Democratic Party don’t really deserve your loyalty or support just because Trump and co. suck slightly worse, and I want to emphasize slightly. Not that there’s anything you can realistically do about it other than keep voting for them, but basically it’s like being a Blazer fan – ever since the Jimmy Carter era, you’ve been repeatedly disappointed.

Imagine a tug-of-war where one side is a team pulling to the right and the other side is a heavy sled. The Democrats are the sled. Never an actual team pulling the other direction, only a passive object that occasionally is too heavy for the other side to budge, but mostly gets slowly dragged along. Because the people & corporations supporting them are mostly just slightly different flavors of the same ones supporting their opponents. And RE transportation specifically, you most likely only need to look in your own driveway for the micro-version of this same phenomenon, which is: You can’t serve two masters.

Middle of the Road Guy
Reply to  Matt

Valid criticism is not an attack. It’s pointing out a hypocrisy.

Houston Chronicle has had some of the best in depth transportation reporting in the last 18 months (that I’ve paid attention). I wouldn’t write this off as a shocking article by them. They’ve been on the beat.

B. Carfree
Reply to  PDXCyclist

The Houston Chronicle has a front-row seat to disastrous transportation and land use decisions, so they should have this covered. Pretty much every terrible thing that can be done in those arenas has been tried and has predictably failed in Houston except personal helicopters (and that may be coming soon).

While I’m no fan of De Blasio or NYPD (I’m actually the opposite of a fan), the fact is that when he took over as mayor in 2014 the ACS said that 1.1% of NYC commuters were on bikes and the most recent data, 2017, has bike commuting at 1.3%. He’s a buffoon, but he’s not causing disaster. Sadly, that’s the bar in today’s America.

Amazon’s kamikaze delivery drivers are a movie some of us have seen before. In the 1990’s, Domino’s was promising “your pizza in 30 minutes or it’s free” placing their drivers under similar pressure. After a few killings on the road by pizza delivery drivers, Domino’s was sued out of the policy. I hope states get on the ball and regulate Scamazon similarly. I have believed for a long time that commercial drivers need regulation that forcibly separates time and money–endangering everyone on the road for a faster delivery sounds like the classic definition of swinging one’s fist until it hits another’s nose.

RE: Entitled white people in Utah. I spend a fair amount of time in White Lake city and White Ogden and White all over the place. It’s the epitome of whitedom. It’s no surprise when White people bring cars (the traffic they are) to a place to “protest” a problem that does not exist. Of course, it’s no surprise they are against child care since most women there just stay home with the kiddies and also brain wash them (home school). A, SLC/Utah, you continue to bring me weekly giggles while as a state/town you continue to widen almost every arterial and every highway (thereby inducing massive traffic) and yet complain of one mixed use development.

Please, try to just research one thing after church on Sunday. MMMK?