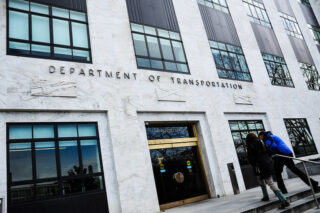 The Oregon Transportation Commission just announced a special meeting that will take place on Wednesday where they are likely to choose a new leader of the Oregon Department of Transportation.

ODOT’s longtime director Matt Garrett announced his resignation back in January and left the agency in June. An OTC search committee has been meeting since March to choose his successor.

Iwasaki, a civil engineer by training, (@RIwasaki2 on Twitter) has more experience than the other finalists, having worked as head of CalTrans in California where he managed a $10 billion budget (twice that of Oregon’s) and 21,000 employees (over four times the size of ODOT’s staff). In an interview with Contra Costa Today in February of this year, Iwasaki said he got his “love of cars” as a boy while hanging around the gas station owned by his father. Iwasaki’s biggest project to date is the $1.3 billion in eastern Contra Costa County (northeast of San Francisco) that added light rail and widened Highway 4 from four to eight lanes.

Sheehan oversees an agency that’s much smaller than ODOT. Trained as both an engineer and architect, she recently told New Hampshire Public Radio that NHDOT considers bicycling and walking, “as viable modes of transportation.” “We would like to see that number [of bikers and walkers] increase for many reasons: To get people into active transportation to for their health and well-being and in urban settings where we have congestion and we are trying to create communities where people can live and work and play, we’re working to invest in walking and bicycling that will help communities reach those goals.

Strickler moved to ODOT from Washington’s DOT to be project manager of the failed Columbia River Crossing (CRC). During a legislative hearing on speed limits back in March Strickler acknowledged that the 85th percentile rule for setting speeds is outdated. “Maybe the historic practice that we’ve been using [to set speeds] doesn’t necessarily fit the context of what our current transportation system is,” he told lawmakers. “And maybe what the future of that transportation system is, and are there other ways to look at speed setting as we start to look at this future.”

This morning the OTC announced they will meet over the phone in executive session (not open to the public) tomorrow (9/4) at 11:00 am to discussion the director position appointment. “The Commission may come out of Executive Session to take action and name new director and delegate authorities to the newly named director,” reads the agenda (PDF).

Stay tuned for the announcement.

Which one is going to be most okay with overseeing the declining engineering department of the highway department. Which one will be willing to switch to a maintenance organization for Oregon’s roads while focusing or future investment in non-car modes

This is a great point. Seems to me that DOT execs, wherever they are, really function as super-project managers. They want to oversee huge highway infrastructure projects – it’s what really gets them excited and eager to go to work every morning. And that’s frankly what scares me about Iwasaki and Strickler: the former has built huge highway infrastructure projects and the latter wants to.

We all know, from having ridden on Oregon’s crumbling roads (the bike lane along the edge is always first to crumble) that ODOT is terrible at maintaining what it has already built, but it’s what they really need to be doing. Maintenance isn’t sexy, like a new eight-lane highway construction project or a 14-lane bridge.

Bets are on Strickler. Because most ODOT employees are white, male and 50 plus. Also, Strickler has managed boondoggles before (CRC), and appears (in so many words) to hint at increasing vehicle speed limits.

Gary B
Reply to  Mike Quigley

Dan A
Reply to  Gary B

Or he’s come up with a new justification for raising speeds. Higher local speeds are safer because they discourage walking?

J_R
Reply to  Gary B

The increase in speed limits in eastern Oregon a couple years ago was mandated by the Oregon legislature. Most ODOT staffers were opposed or reluctant but were unwilling to fight the inevitable outcome.

Some people say that Victoria will be installed as the new director under direction of the Governor. Gov Brown is very pro-woman. Those same tea leaves portend that there will be resentment within the Agency (and possibly bone rattling shake ups) if she is awarded (punished with) the position and enacts environmental and human centered policies.

Granpa
Some people say that Victoria will be installed as the new director under direction of the Governor. Gov Brown is very pro-woman. Those same tea leaves portend that there will be resentment within the Agency (and possibly bone rattling shake ups) if she is awarded (punished with) the position and enacts environmental and human centered policies.Recommended 0

well, that would be nice to see. However, if she is more than just a token woman to sit in the finalist round to make sure ODOT doesn’t look like the organization they are, things may be looking up. Or she might be forced out later and an “acting” director takes over. Hey, put them all in and really shake the place up.

It would be nice to NOT see the California candidate–in this year 2019 such a professed love for cars should be an automatic disqualifier as showing the person’s mental backwardness. Likewise Kris Strickler–he did help implement a WSDOT project in Vancouver which did have a side effect of making some neighborhood through streets less walkable due to heavier and faster vehicle traffic.