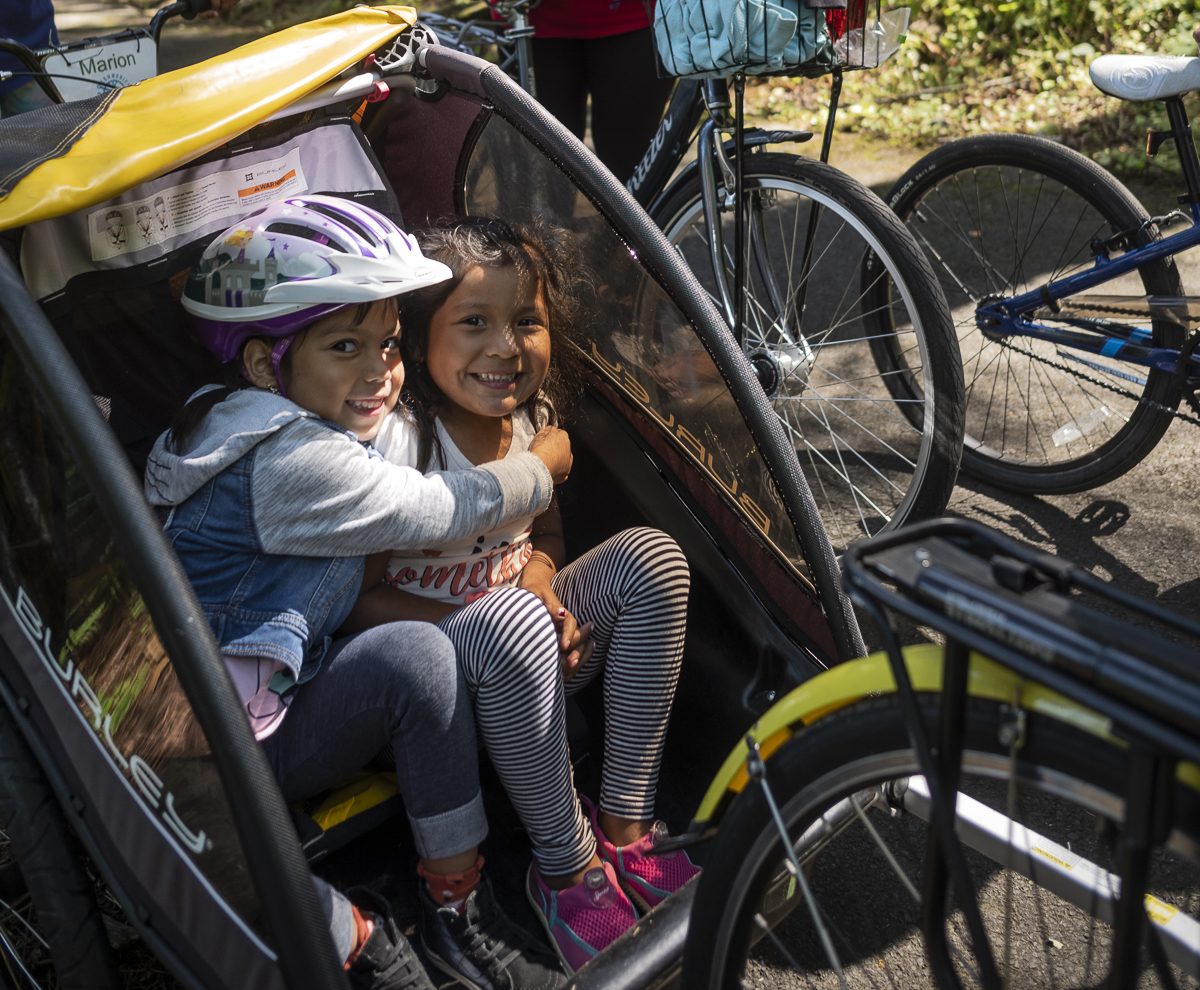 With incredible support from many people and organizations, the Gorge Pedal ride happened this July. It delights my soul that this happened and reinforces several public and hidden agendas in regard to our needs of our incredible World Heritage Site worthy Columbia River Gorge.

The idea of Gorge Pedal had two initial elements: The fire of 2017 closed the Historic Columbia River Highway and Trail. I proposed to ODOT that the weekend prior to opening the “road” we allow cyclists and pedestrians full unfettered access to the road without motor vehicles. The road opened in sections over the next 16 months. The second idea is more involved with our mono cultures of aging groups. And this asks the question of how we teach our next generation stewardship of our Gorge’s resources.

For the past several years I’ve been working on Equity, Diversity, and Inclusion issues as a Board member of the League of American Bicyclists. As part of this effort, I began at looking bicycle clubs across the US and asking the questions: how diverse and how inclusive are these bicycling groups. Yes, one can not only imagine but one can find very concrete evidence of how singular an appearance and constitution our national bicycle club scene depicts. I reached out to other organizations which seemed parallel. One was our own northwestern Mazamas. In a terrific discussion with their executive director, our topics over lapped seeing more aging members than new younger members, their board’s desire to increase diversity among their members, & increasing a broader, more inclusive educational aspect of their mission ~ no different than the membership profiles of bicycle club across the USA.

The glaring missing diversity markers in many clubs were the obvious racial, ethnic, income disparity, ability-disability, gender, and age…The cycling club activity descriptions were along the line of ‘how fast how long can you go?” On most front web page sites are declarations of which speed ride should you join and what is expected.

This led me to start with the most common denominator of all the diversities: age and the next generation. One great strength of cycling is our huge umbrella of humans who love cycling. This includes all types of race, gender, adaptive, family, age, economic class, etc. You all know this. But we also know the exclusions. Bike lanes only populate white communities in many US cities; children and women have fewer counts cycling on the streets and in bike clubs; economic deprived communities do not get active transportation dollars from Fed/State transportation dollars; on it goes. This is the backdrop for choosing to feature a Family Ride in the Gorge (11 miles) in addition to a longer Gorge Climb Ride (43 miles).

Finally a change: Gorge Pedal had 60% family riders and 50% of both groups were first time Gorge cyclists.

Traditionally, I knew that many riders want the longer, hill-challenged Vista House climbing. I knew that the Historic Columbia River Trail afforded an opportunity to have a car free ride for those unknowing of its existence. I figured the ratio of those attending would be something like 3-4 Climb riders to 1 Family Trail rider. Excitingly, Gorge Pedal Family riders dominated with 60% registration. 11% of all the cyclists were 9 years or younger and under age of 15 totaled 17.2%. On the other end of the age spectrum there were 18 people over 70 years old cycling. And of the registrants, 51% were women cyclists (self-identified as women; the registration platform is undergoing change and next year I was reassured that a fuller gender ID would be inclusive). Amazingly this is not an American cyclist profile. It is a full 8 to 80 embrace of making cycling accessible to those from 8 years old to 80. It is a Family, first timer kind of ride. I am thrilled and taken aback.

Fifty percent of the cyclists on Gorge Pedal had never bicycled in the Gorge — nearly 150 people. Of these new-cyclists, we attracted a national group, Latino Outdoors, who supported Gorge Pedal to register a number of cyclists from Anadando en Bicicletas Y Caminando (ABC) based in Cully neighborhood-Portland. The ABC is coordinated by Miche Lozano of the Community Cycling Center. Further assistance came from Leslie W. Garcia, Hispanic/Latinx Communications and Community Engagement Specialist of U.S. Forest Service who provided transportation to help get riders and bikes to and from Cascade Locks.

I solicited a number of other groups, Black Women on Bikes, WTF, Ride Like a Girl, Kidical Mass, Portland Bicycle Club, and several cargo bike groups to participate as groups. The informal nature of these organizations and the great variety of our Northwest outdoor activity\ies did not see these identifiable groups as distinct participants. I would love to see these cousin organizations have visible identity on the next Gorge Pedal. Seeing others ‘like me’ is a fundamental way to express diversity. And we all need to work harder to make sure the invitation to participate is heard and expresses a sincere welcome.

Another sidebar issue is the development of Oregon Travel’s Equity, Diversity and Inclusion policies. Within this is the concept that OT needs to turn its attention to our state’s citizens. We are still finding out about ourselves. I recently delivered both Ukrainian and Russian language versions of Smart Cycling Guides (by the League) to Gresham/Rockwood active transportation leaders. These two efforts of introducing people to the Gorge and getting people on bikes are concrete steps to make sure we are welcoming all people. It is not enough to simply advertise events; we have to reach out and welcome people. Getting new people to enjoy the Gorge from a bicycle seat will remind them when they take relatives to the ‘Gorge’ there are alternatives to Multnomah Falls and its congestion.

Throughout the background of creating a bike ride in the Gorge is the congestion mitigation thread. The Gorge Express bus has been a huge positive growth experiment to get more people to the Gorge without a car. Getting bicycles with riders to the Gorge & back to Portland remains a tiny success. The buses now have front racks; the bus belly can handle a few cycles…but we need more transportation options and more frequent schedules to get people into the Gorge on bicycles. It was daunting to get a transport of 10 to 50 bikes en masse to the Gorge. Grayline bus company and I worked hard to get a reasonable price for transporting a group to Cascade Locks…but it would have doubled the price of registration.

Another underlying significant issue in putting the ride together was about Columbia Gorge Resources. Multnomah Falls is the most visited site in Oregon (after the Woodburn Outlets shopping center). Congestion mitigation of the Gorge Highway is stalled in a 2 year “quick fix” study, a 3-4 year midterm solution, and a 5-6 year long term goal process. This is a sad leadership issue refusing to look at 3+ million visitors & the escalating strangulation of the Gorge pedestrian and vehicular corridor. The I-84 parking lots dump 1200 pedestrians an hours crossing the Historic Columbia River Highway from 10:30 to about 2pm. The intersection at Powell’s Book store on Burnside has about 800 crossing people near noon. Educating the public that there are more wonderful sights to see beyond the “Falls” is a strong foundation of the Columbia Gorge Tourism Alliance. We were able to offer local wineries, cideries, brewers to offer local products to the cyclists at the post ride Celebration. As for the non-ride part, our Celebration in Cascade Locks introduced people to the Warm Spring Art Community of artists, Anvil Academy blacksmithing, and a number of advocates, wineries, cideries, breweries from the Gorge. Special hat tip to Thunder Island Brewery for making the event be inviting to all. We need to distribute the singular attention of Multnomah Falls to the rest of the Gorge.

While we hoped more visitors would enjoy these participants and this needs more work…which is all consistent with Teach the Next Generation. We want people to recognize the diversity of what we have in our backyard, the Gorge. This recognition is the first step to teaching the next responsibility and stewardship of our land and people resources. Whether it is the Mazamas or the bicycle organization of your choice or the Tourist Vendors or a governmental agency, the message is the same: we teach leadership and stewardship by example.

So, above are some my “Heart and Mind.”

The “Thigh” part is really the responses we got from the ride.

The smiles were everywhere. Free Root Beer Floats were a hit at the end of the ride. People said the 250 feet climb on the ride to the Family ride’s turnaround was hard; some wanted a longer Family ride.

I delayed talking about the staircase near Eagle Creek for a long time. I arranged for a cross fit group to carry bikes up and down the steps. And people loved that the staircase was benefitted by the Happy Valley Cross Fit team. I witnessed surprised faces saying thanks to Megan, her husband and brother for carrying their bikes up/down. (yes, 60 lb. ebikes, tandems, bikes with trailers too). I did five bikes and thought, ‘oh, I am getting old.’

In the best fashion of our OR-landia, some wanted better organic food; some wanted to read the labels on the Peanut Butter jars; and some wanted a gold medal at the end.

Many reported that the volunteers were just excellent; Charlie and Trailhead Coffee waiting at the Women’s Forum turnaround for the Climb riders got many cheers.

We learned people needed better signage and pre-ride communication should be improved; thanks were expressed to Jamen Lee of the Oregon Parks and Recreation, Megan Innes of the US Army Corps of Engineers, and Melinda Moeur whom provided geological and historical narratives along the Family ride; and wonderfully a number of people said, “It was awesome and I’ll do it again!!!”

Yes, there are more details and many to thank for making this happen…but will save for a later discussion and next year’s planning. I can’t say that the dream to close the Historic Columbia River Highway to traffic for several hours and only have pedestrians and cyclists take over the entire Waterfall area to Vista House is completely day lit. It lingers.