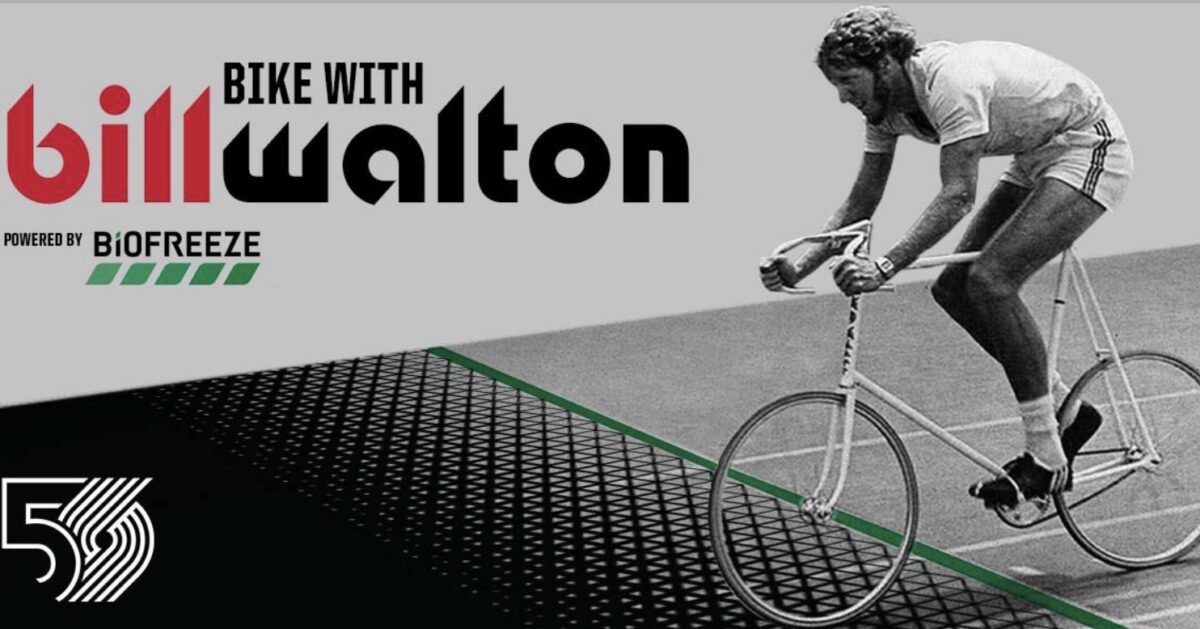 You’re sitting on your porch with a drink after work and you see the biggest sports star in town pedaling a bicycle up your street. “Good luck tonight Bill!” you call out as none other than Portland Trail Blazer star Bill Walton rides by with a huge smile on his face.


That type of thing almost never happens these days. But this Sunday Bill Walton will once again ride the streets of his adopted hometown — just like he did when he biked to the 1977 NBA Championship parade.

Walton, who first gained fame at UCLA before helping the Trail Blazers win their first and only NBA Championship (so far), will join fans for a bike ride during Sunday Parkways this weekend. It’s all part of the hype as we build up to the Blazers’ 50th anniversary season.

“Take a bike ride down memory lane and Bike With Bill and the Trail Blazers, powered by Biofreeze, as they ride a portion of the Portland Bureau of Transportation Sunday Parkways Green Loop, ending with a special announcement and live music from Grateful Dead Cover Band Garcia Birthday Band at Terry Schrunk Plaza, where the 1977 championship parade concluded.”

Sunday Parkways is from 11:00 am to 4:00 pm, so take advantage of the loop of carfree streets before you roll over to Memorial Coliseum to meet Bill.

The gathering of fans on bikes will begin at the Memorial Coliseum Commons at 2:00 pm. The ride leaves at 2:30 and there will be a “special announcement” at Terry Schrunk Plaza at 3:30 followed by live music.

More details at the official event listing on the BikePortland Calendar or on Facebook.

Bill on a fixie, Chris on an ebike–go, guys!

You can tell he’s a basketball player by the head tube!

That’s a bike that should have two top tubes.

Not just the biggest sports star in town, but for a very short time, from when he bested Kareem under the boards during the 77 Western Conference Finals till his injuries ended it all in the spring of 78 he was the greatest basketball player in the world.

There’s a documentary about the Blazer’s championship team that features Bill Walton biking from Portland to the coast in jean short. Along the way he stops at a diner and orders what appears to be one of everything from the entire menu.

It’s called Fast Break and is definitely worth seeing.

Many, many, years ago, visiting the physics department at UCLA, I nearly ran over BIG BILL on his dark green custom Falcon. I was driving my cousin’s light green Chevrolet Vega–very slowly–when HUGE red-haired dude on HUGE bike suddenly CAME OUT OF NOWHERE, CROSSED THE ROAD, and IMPEDED MY MOTORING!

“RIP CITY” hung in the balance, but how was I to know?

Bill Walton cracks me up.

Did anybody catch him broadcasting the white sox game the other night?