It’s been a long time coming, but Portland is finally about to take a big step forward in road safety. The Bureau of Planning & Sustainability (BPS) announced today they’ll propose a change to the City’s administrative rules that would require all garbage and recycling contractors to fill gaps in the sides of their trucks by 2022. The new mandate would apply to about 195 vehicles that currently don’t meet federal safety standards. 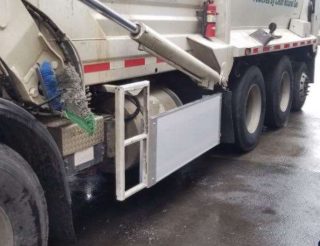 Commonly referred to as side guards, the goal is to close the gaps on the side of trucks between the front and rear axles where vulnerable road users often end up in collisions. US Department of Transportation research has found that nearly half of bicycle riders killed by large trucks first come in contact with its side. With side guards in place, people and their vehicles are pushed away from the truck’s undercarriage and wheels.

Portland first pushed for side guards in 2007 following the deaths of Tracey Sparling and Brett Jarolimek. But progress has been painfully slow. Our Vision Zero Action Plan, passed in 2016, lists the installation of side guards as one of its five-year actions. In February 2017, after yet another Portlander died in a right-hook collision with a truck operator, the Portland Bureau of Transportation said there was simply no funding for side guard installations.

But Portland Planning and Sustainability Commissioner Chris Smith never stopped pushing for them. As we reported in October 2017, Smith brought the issue to the table at every opportunity. The PSC advises Portland City Council on annual garbage and recycling rates, so Smith used that as a lever to keep the issue alive.

Last month BPS published a report on their Side Guard Pilot Project (PDF). The agency installed side guards on 18 garbage and recycling trucks and worked with 11 different contractors. Based on their findings, BPS Solid Waste and Recycling Program Coordinator Pete Chism-Winfield says they will propose that side guards be mandatory on all garbage and recycling trucks by January 2022

Here’s the official language of the proposed amendment to the city’s administrative rule:

c. Side Guards and Safety Equipment. Side guards are safety equipment designed to protect vulnerable road users from the hazards of open spaces on the sides of large trucks. The following schedule will result in the implementation of side guards on all collection trucks with side gaps between wheels greater than two feet. All side guards shall meet the Volpe specifications according to the following schedule:

III. All collection vehicles must have decals placed on the side guards or body that indicate to vulnerable road users that they are in a blind spot. (A/I)

Based on current truck inventories, BPS estimates that 195 trucks will need to be retrofitted before January 1, 2022. Based on the costs of the pilot retrofitting the 2010 to 2019 trucks ($2,623 per truck) would cost approximately $432,795 across all garbage and recycling companies. BPS will subsidize retrofit costs up to $1,000 per truck.

Asked if BPS has contacted Metro to implement a similar mandate on a regional level, Chism-Winfield said they (and other regional partners) have expressed interest but have made no commitments. BPS is also looking at other equipment requirements like cab design and mirrors but says they want to carry out the side guard project before moving onto other efforts.

A public hearing on the administrative rule change is set for June 3rd from 4:00 to 6:00 pm.

Why such limited rollout? This should be a default permit and contract requirement for trucks that are doing business with the city.

Middle of the Road Guy
Reply to  Tom

Huge credit to former BPS Director Susan Anderson who funded the pilot out of BOS budget and to Pete and other BPS staff who worked diligently on this.

Chris, as always…mucho mahalo for your almost daily technocratic slog on fighting the good fight by your attendance at too many meetings for too many years to get the devil and the details together!

I’ve been a cyclist on Portland streets for 30+ years. All of these safety measures are a waste of money and natural selection should be allowed to run its course. It’s infuriating to see these bikes trying to assert their “right of way” against vehicles weighing up to 40 tons. Your job as a cyclist is to be 100% defensive. If a bike gets hit, unless a car drives up on the sidewalk, it should be assumed the it’s rider’s fault. Just like when a car rear-ends another. Bike lanes only offer an illusion of safety, I never use them unless I look back and no traffic is coming. Bikes are PEDESTRIANS! Get back to acting like them.

Chris I
Reply to  Cyclist

Dan A
Reply to  Cyclist

B. Carfree
Reply to  Cyclist

Is this where I’m supposed to make some silly comment about roads being for freight and when a truck driver kills the occupants of a class C vehicle that’s their own fault for mixing with vehicles that weigh 40-53 tons?

Funny enough, I have been a truck driver. At quality companies there is extensive training to get everyone on board with protecting all other road users. I’ve had people do some very dangerous things, usually involving a moment’s inattention, and my training and honest desire for all of us to see another sunset allowed everyone to land safely. I can’t conceive of having any other attitude.

Middle of The Road Guy
Reply to  Cyclist

I kind of miss being able to shoot guns in public. People should learn to get out of the way.

While the side guards are proven to be effective at reducing severe injury and deaths, I’d still rather not be hit at all. Why don’t we instead, or additionally, mandate 360 degree cameras with a dashboard display and audible blind spot warning on all commercial trucks? Safety technology like this is fast becoming standard equipment on cars and I assume could be retrofit on truck fleets for less than the cost of side guards.