TriMet shared an update on their Gideon Overcrossing project at a joint meeting of the Portland Bureau of Transportation’s Bicycle and Pedestrian Advisory Committees last night. 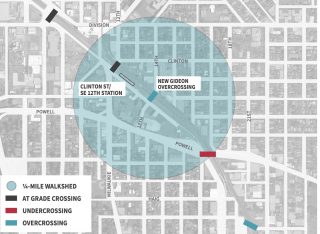 A TriMet staffer shared images of the nearly-final design. She said they intentionally made it visible from nearby crossings (if people don’t see it they won’t use it) and tried to make it “iconic” as requested by neighborhood residents.

The bridge will have an elevator similar to the one on the nearby Rhine-Lafayette overpass (which gets rave reviews from bicycle users). It will also have stairs with a wheel gutter for when the elevator isn’t working. TriMet said they considered a rideable ramp but given the height/overhead clearance requirements needed for both a MAX light rail and freight railroad line, along with ADA slope requirements, the ramp would have been too long, expensive, and cumbersome to fit in the project.

The stairs will have a wheel gutter to make walking your bike up them easier. TriMet said they studied existing gutters and sought advice from afar to come up with their design. The trick was to make the gutter easy to use while not creating a tripping hazard. Below is a slide from last night’s meeting that shows how the Gideon crossing gutter compares to the existing Rhine-Lafayette crossing:

(Rhine-Lafayette gutter on the left, Gideon on the right)

As you recall, the controversy around this project had to do with how it landed on the 14th Avenue side. Several businesses opposed the project on grounds that it would impede their truck loading access and create safety hazards. In the end, TriMet decided to extend the driveway of Koerner Camera Systems so they could maintain access to their loading dock. TriMet’s design also creates a public plaza on the 14th Avenue side.

The bridge will be built by TriMet, but owned and operated by City of Portland Bureau of Transportation. It’s expected to be completed and open for use by July of next year.

thanks maxD. Fixed that.

First item on the agenda for joint PAC/BAC meeting last night: the Gideon overcrossing, a project that is necessary because of the length of time that freight trains block the surface crossings of the Union Pacific tracks in inner SE.

Last item on the agenda last night: the Division Transit Project, which will re-route buses over an at-grade crossing of said railway.

Chris I
Reply to  maccoinnich

At least they aren’t calling it Division RAPID Transit anymore…

I’m happy the bridge is finally being replaced, but the design is hardly “iconic” (or even, in my opinion, attractive).

What should happen with the elevators (here and at Lafayette) is that when you go up one side, it automatically calls the elevator on the other side so it is waiting for you, and when they haven’t been used for a few minutes, they both go down to the bottom to await their next passenger.

Also can we just have two freakin’ buttons? Pause and Go. There are no other possible options needed, I’m not going to floor 3 or a basement. And if someone else is rolling in and you want to hold the door open, just pause a moment- you don’t need 4 freakin’ buttons to open/close front or back or whatever direction they assume an elevator is facing. Lafayette elevator interface was definitely designed by the intern who happens to be the CEO’s nephew.

And “go” should actually go, not just be a dummy feel good button.

And they should be red and green.

Why not hold a friendly design competition for this sort of thing?

Well it’s not what I’d call “soaring” or “inspiring.” It’s more “practical” and “solid.” It actually looks a bit like a railroad structure. Was that an intentional nod to tradition, I wonder? Or just arriving at the same kind of design because in both cases it’s the most practical & cheapest? In a weird way its lack of pretension blends in with its environment better than a lot of recent housing projects I could name.

The very next thought I had, I hesitate to share because it plumbs the very depths of cynicism and alienation… stop reading now!
—-
Begin countdown to BikePortland article about this bridge, containing the words feces, needles, and harassed.

Blends in? It looks like nothing around it. Most everything else near it that looks like a rusty relic has been replaced.

A few things to note:

Trimet initially said they would extend the loading dock to Koerner Camera. Eight months later they said “we would never do that with Federal Grant money”. The auto turn studies TriMet presented to Koerner Camera are based on the extended loading dock which doesn’t exist and they will not pay for. Therefore the auto turns are invalid and there is no access to the loading dock.
On another note how does everyone feel about there being no security cameras on the bridge or elevator? The Lafayette Crossing has six cameras on the bridge, one in each elevator and four at the bottom of each staircase. PBOT who will own the bridge says “we don’t have people to watch the cameras”. Cameras and their footage are there for reference when something does happen.

Chris I
Reply to  Todd D

If they want an extended loading dock on their private property, they should pay for it. The public should not.

Unless, of course, the public makes their current loading dock non-functional.

Todd D
Reply to  Chris I

The loading dock will be not be functional when the structure goes in.

Jeff
Reply to  Chris I

Glad they came up with a better gutter design for the stairs – the Lafayette one is not very usable.

Is there a way to install nozzles in the elevator that will spray a fine mist of bleach and water to cut down on the whiz smell?

I wonder how large the elevator is. It’d be great if it could fit large cargo bikes. Most TriMet elevators I’ve seen are too small for cargo bikes.

Mitchell HuffMenne
I wonder how large the elevator is. It’d be great if it could fit large cargo bikes. Most TriMet elevators I’ve seen are too small for cargo bikes.Recommended 0

I am almost positive Trimet made sure to engage the bike community and make an elevator large enough to accommodate cargo bikes and those for mobility impaired bikes. No doubt. Especially after they banned cargo bikes from max.

I understand the ramp constraint on the north side, but isn’t there room for a ramp on the south side? Having to deal with only one set of stairs is only half as bad.

Iconic? Yeah, I guess you could call an abandoned factory that’s been rusting away for 100 years iconic. That’s my first impression of the above renderings.