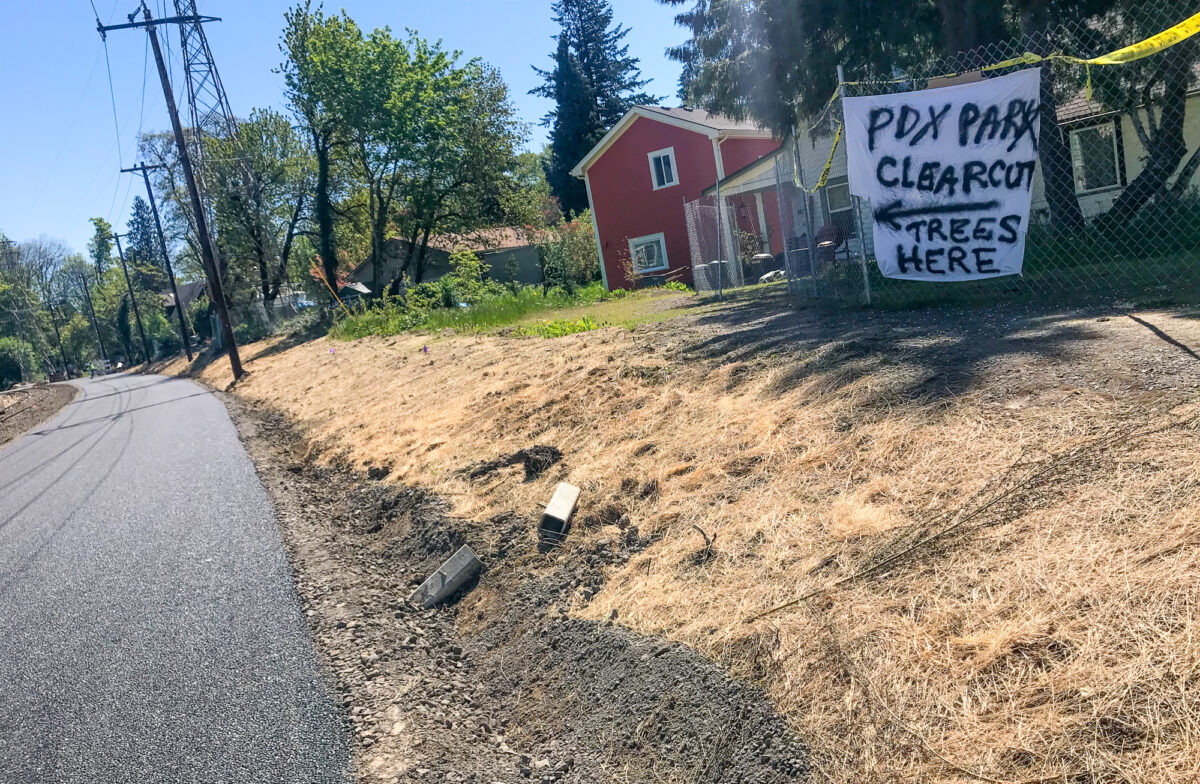 Mirante, an author and activist, spoke up for the “urban woodland” of mature apple, cherry, walnut, and hemlock trees that dominate her lot*. Or I should say, used to dominate her lot. (*Update, 2:18 pm: None of the trees removed were on Mirante’s lot. They were on Parks and/or Metro-owned right-of-way). That’s because Parks’ paving plans required them to remove the trees to make way for the 16-foot wide path that, despite not being officially open, is already being used by walkers and rollers of all types. 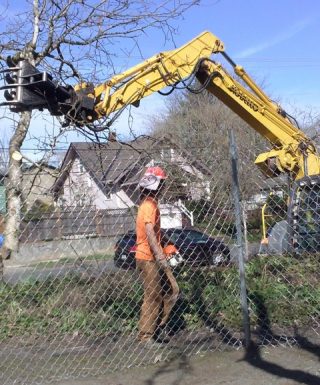 Removal in progress. Note the “Save Me” sign tucked in his hardat.
(Photo: Edith Mirante)

Mirante did all she could to prevent what she calls a “clearcut.” She put up “Save Me” signs in the branches and got an op-ed published in The Oregonian on March 17th. Mirante wanted a retaining wall built and suggested narrowing the path to 10 feet to save the trees. But her suggestions were not heeded by the Parks bureau.

Parks project manager George Lozovoy told Mirante and other neighbors at pre-project meetings that the trees and/or a narrower path would present a crash hazard. Parks Community Engagement Coordinator Ken Rumbaugh told Mirante in a March 6th email that, “We strive to preserve trees in all projects whenever possible, and if they must be removed – as in this instance – we mitigate their loss by planting new ones using the high standards set by Portland Parks & Recreation Urban Forestry.”

On March 20th, three days after her op-ed came out, Mirante awoke to tractors and workers in hardhats. They were cutting branches and pulling the old trees out by their roots. One of them had even grabbed the “Save Me” sign and wore it under his hat as he hacked at the old apple tree. Mirante took notice in a series of live tweets.

“They just ripped the branches off the maple to cut it. And now the hemlock (native species) is being cut down,” she wrote. “Crew member for @PDXParksandRec* just approached me on my property with piece of wood from the apple tree and said as a joke “These make great picture frames.” They have now cut the apple tree.” (*Note: This was a private contractor, not a City employee.)

By April 18th, the trees were gone and a 16-foot wide paved path was all laid out. I snapped the photos below last weekend…

Asked to respond to Mirante’s concerns, Parks’ Rumbaugh said the City had, “No alternative but to remove the trees.” Among the reasons was that the project scope wouldn’t fund a retaining wall, the width was needed for expected path user volumes, and many of the trees were under power lines. “Additionally,” Rumbaugh wrote in an email to BikePortland, “Most of the trees which had to be removed were not native and those species have shown themselves to be a problem when growing adjacent to natural areas – they tend to spread uncontrollably and outcompete our region’s native species.” 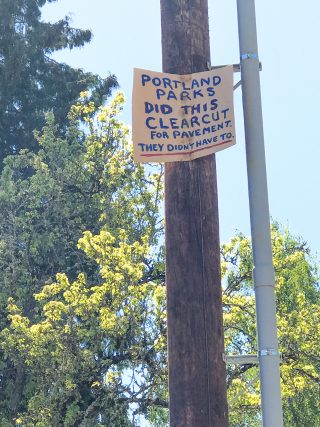 “Removing trees is not a decision PP&R makes lightly,” he continued. “PP&R evaluated many alternatives to try and keep the trees, but the site conditions – such as soil and slope – along with state and federal regulations (like the Americans with Disabilities Act) inform our needed actions. As the Sellwood area has developed, the need for the highly-anticipated Springwater Trail extension has become more and more important to keep cyclists and people on foot safe as they commute and during recreation.”

In total, Rumbaugh said they removed about 38 trees (“many already in poor condition, at the end of their life cycles, or located underneath power lines,” he added). He also pointed out there are still 54 trees along the new segment of path and PP&R will plant 37 new, native trees nearby to mitigate the loss. They’ll also pay into the City of Portland’s Tree Planting and Preservation Fund.

Once the landscaping and fence between the path and the railroad tracks are installed and the new path officially opens in July, you won’t see the old trees; but you might see Mirante’s new ones. She and her neighbors have planted six so far.