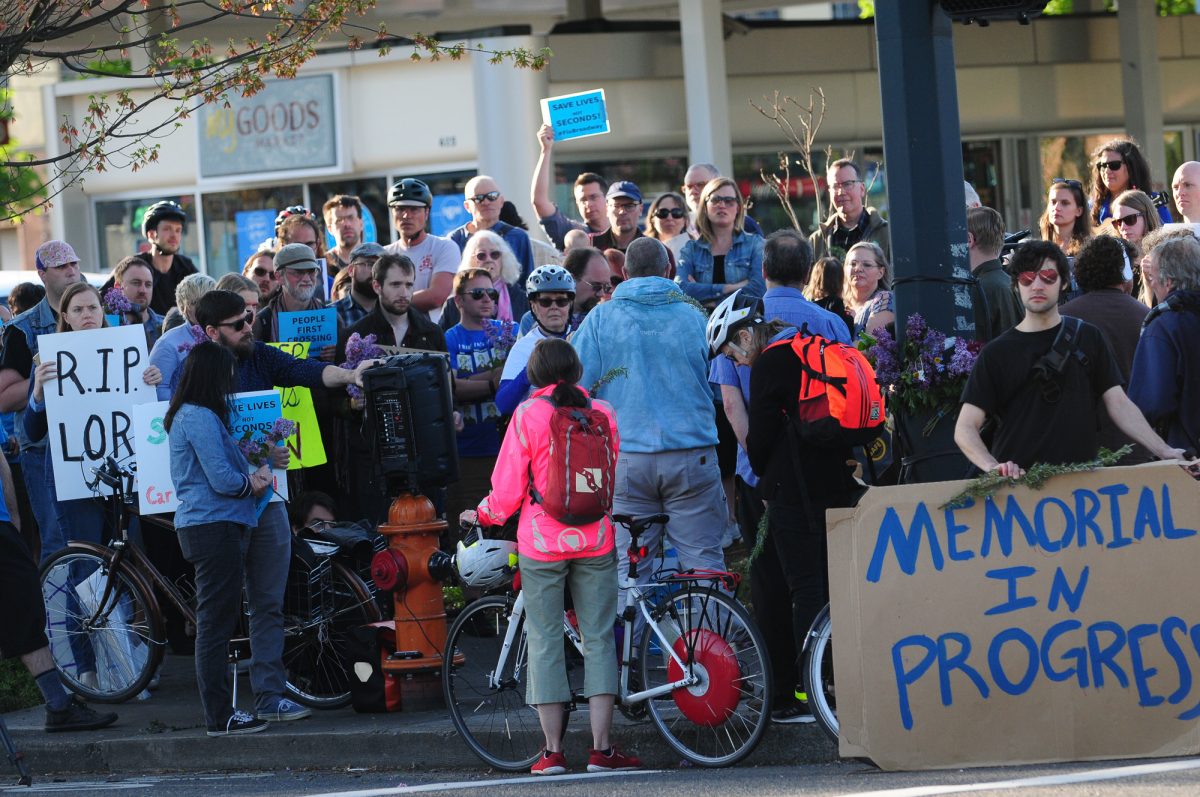 We’ve done this too many times before. Someone is killed. We grieve. We pressure the city to do more. We show up on the street with signs and candles and flowers. Speeches are made.

But this time there was something different. The City of Portland acted before we even showed up.

On Friday, Lori Woodard was killed as she walked across Northeast Broadway on Grand. A delivery truck driver turning left failed to see her and/or failed to prevent the collision (police are still investigating). It happened in a very unforgiving place where drivers dominate and stress runs high for everyone — especially people not protected by a steel cage. 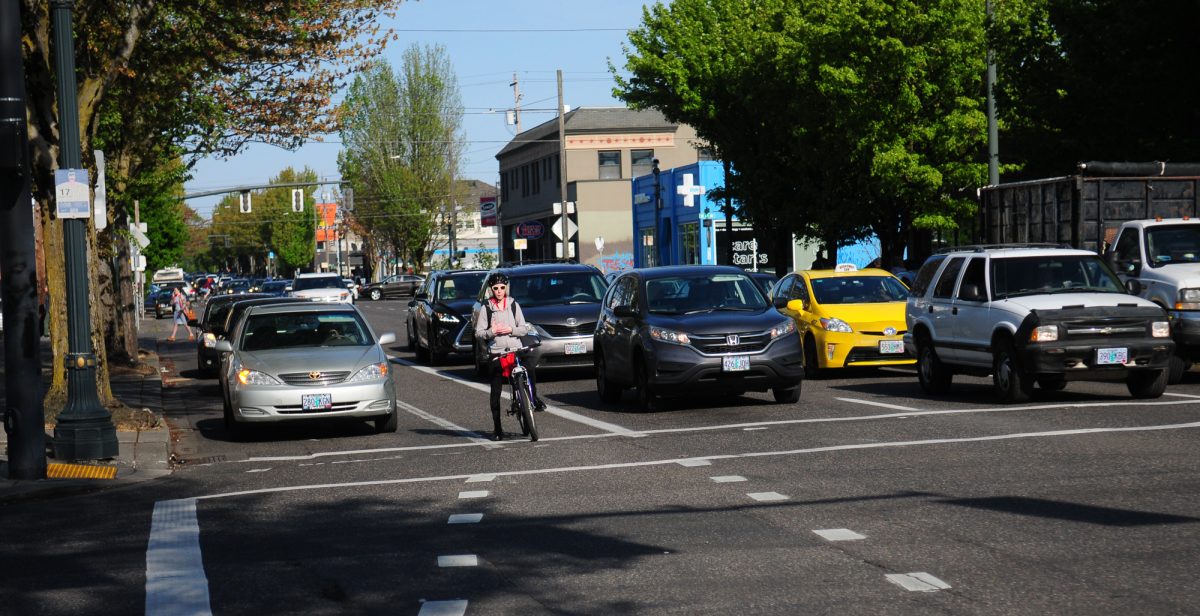 We’ve seen the City of Portland react to deaths like this with infrastructure changes in the past; but never this quickly. This morning, just five days after Woodard’s death, the Bureau of Transportation installed plastic wands and temporary traffic cones to narrow the intersection. They also plugged in a message board sign that flashed the words: “Traffic Death April 19 – Travel With Care”. 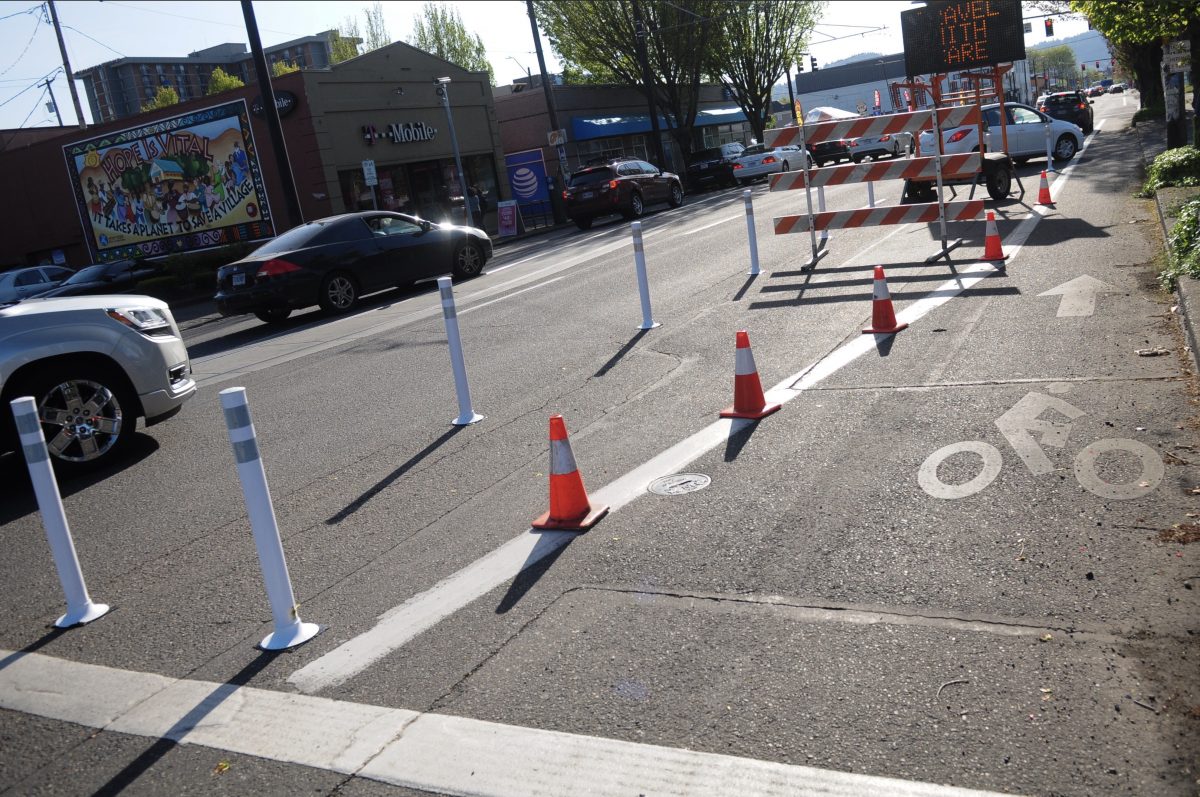 As dozens of people gathered for a rally and memorial event at the scene of this tragedy Wednesday evening, PBOT announced signs like this would be the new normal.

“This was a priority before this horrible thing happened. But it underlines how urgent this is. It feels like the climate change issue. We just have to take our work to a different level.”
— Marshall Runkel, Chief of Staff to Commissioner Eudaly

In a directive released today (PDF), interim PBOT Director Chris Warner introduced a “crash response protocol.” “After every fatal crash,” reads the directive, “PBOT will provide an immediate update with all available information to the Commissioner of Transportation. The bureau will then install prominent electronic Variable Message Signs (VMS) at the crash location to mark the tragic crash sites and raise awareness of the traveling public about specific dangers and the overall importance of driving safely in our city.”

The changes installed at the crash location were already vetted and planned through the Central City in Motion plan. PBOT Commissioner Chloe Eudaly signed off on them and Director Warner says he’s pushing PBOT to finish the project “on an expedited timeline.”

“This was a priority before this horrible thing happened,” Runkel continued. “But it underlines how urgent this is. It feels like the climate change issue. We just have to take our work to a different level.”

Runkel’s words come at a time when Portlanders are reeling from a spate of traffic fatalities. Commissioner Eudaly spoke to that in a speech on the street corner at tonight’s event. “This has been a brutal, heartbreaking month on Portland streets. Nine people have died in crashes in less than two weeks.”

So far this year, Portland is averaging about one fatal traffic crash per week. 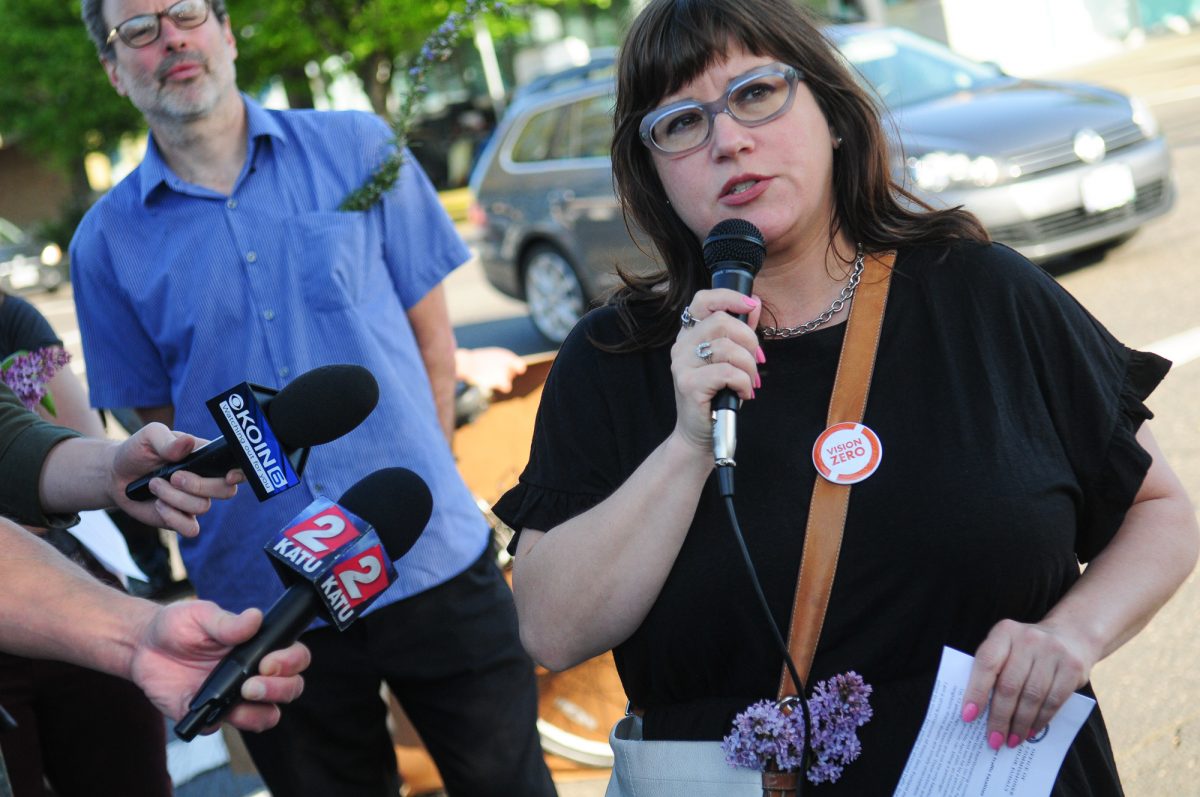 Commissioner Eudaly speaking at the event.

Eudaly oversees a bureau that is committed to Vision Zero, an initiative that aims to eliminate all traffic deaths by 2025. “These recent tragedies show us it’s time to do more of this work and to do it faster,” she said. (Read her full statement on her Facebook page.)

Leading Pedestrian Intervals (LPIs) will become our default practice at new or upgraded traffic signals on High Crash Network streets. A proven tool to improve pedestrian safety, LPIs give people crossing the street a head start at a crosswalk, making them more visible to drivers and reducing potential conflicts. PBOT will add at least ten LPIs each year to existing signals citywide. (*Note: An LPI has already been implemented at Broadway and Grand)

Left turn traffic calming, originally slated to begin this summer, will start immediately. This treatment slows vehicle speeds through large intersections and protects pedestrians at high-conflict turns. It has shown promise in New York and we are excited to evaluate its impact here in Portland.

And when fatal crashes occur, Warner says he will instruct PBOT to do an emergency assessment of the site and, “deploy a range of possible ‘rapid response’ safety improvements that include: interim design changes; signal improvements; and public education. PBOT will apply this protocol to fatal crashes that have happened in the past 12 months.

These are positive measures; but we know it will take much more substantive changes — like reconfiguring lanes, reducing driving space, and creating physical separation between drivers and walkers/bicycle riders — to prevent more deaths.

Below are more images from the event. 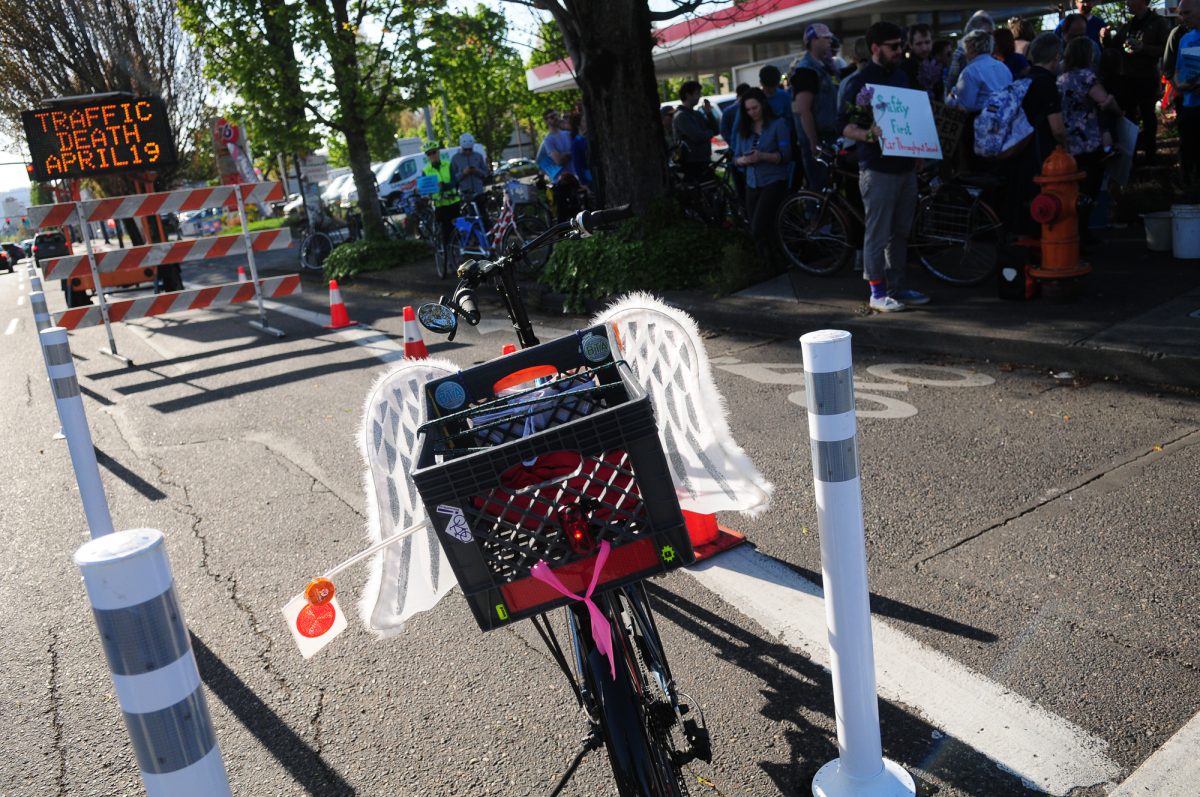 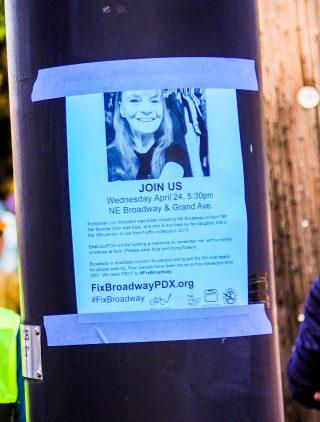 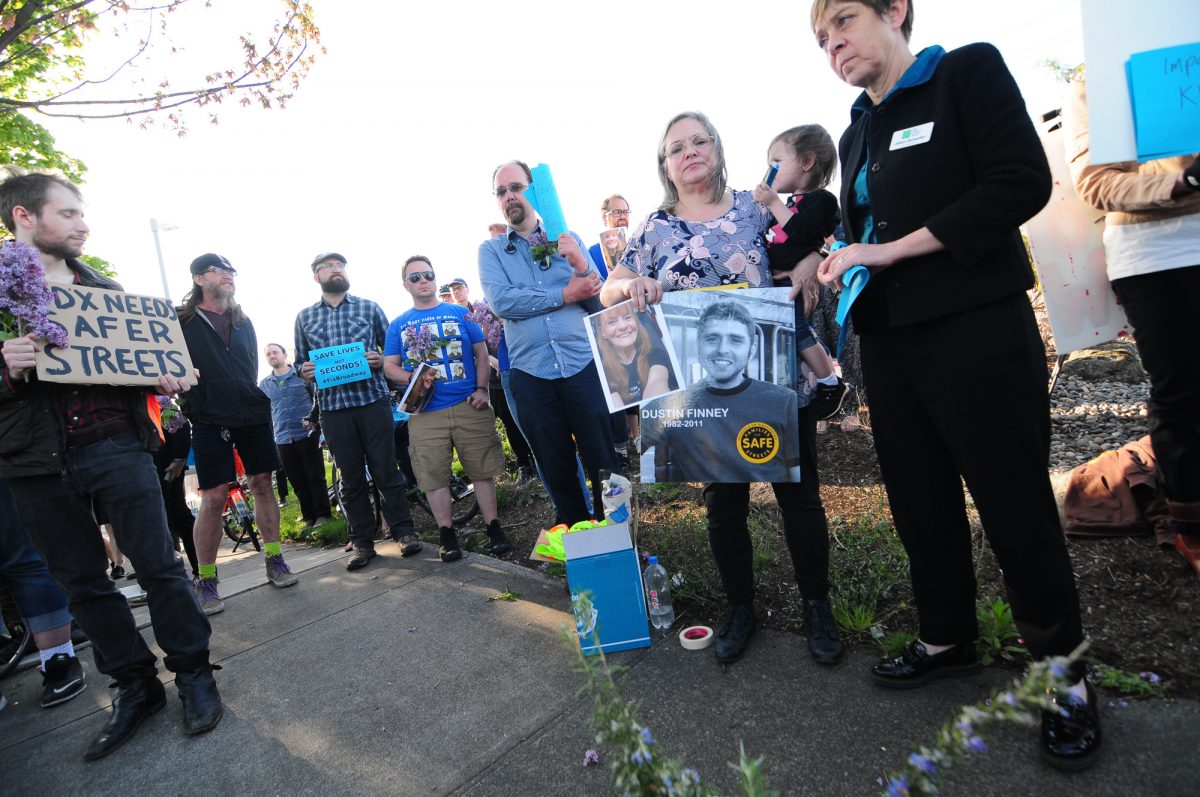 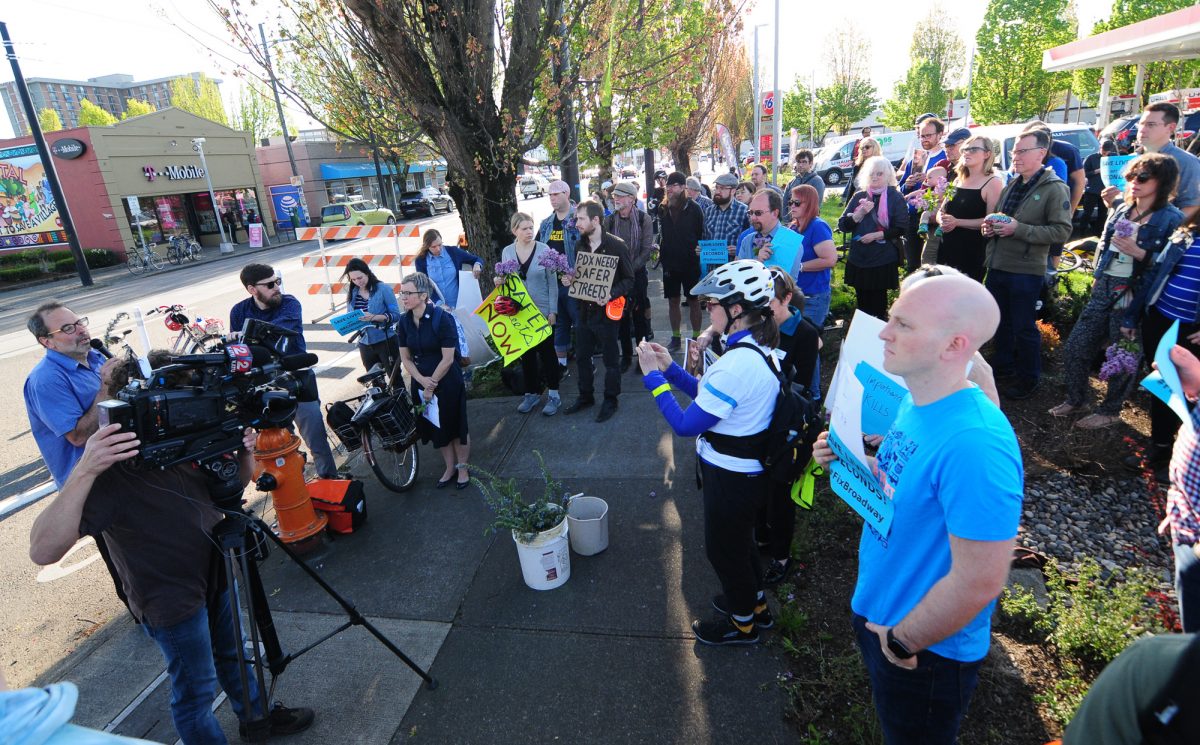 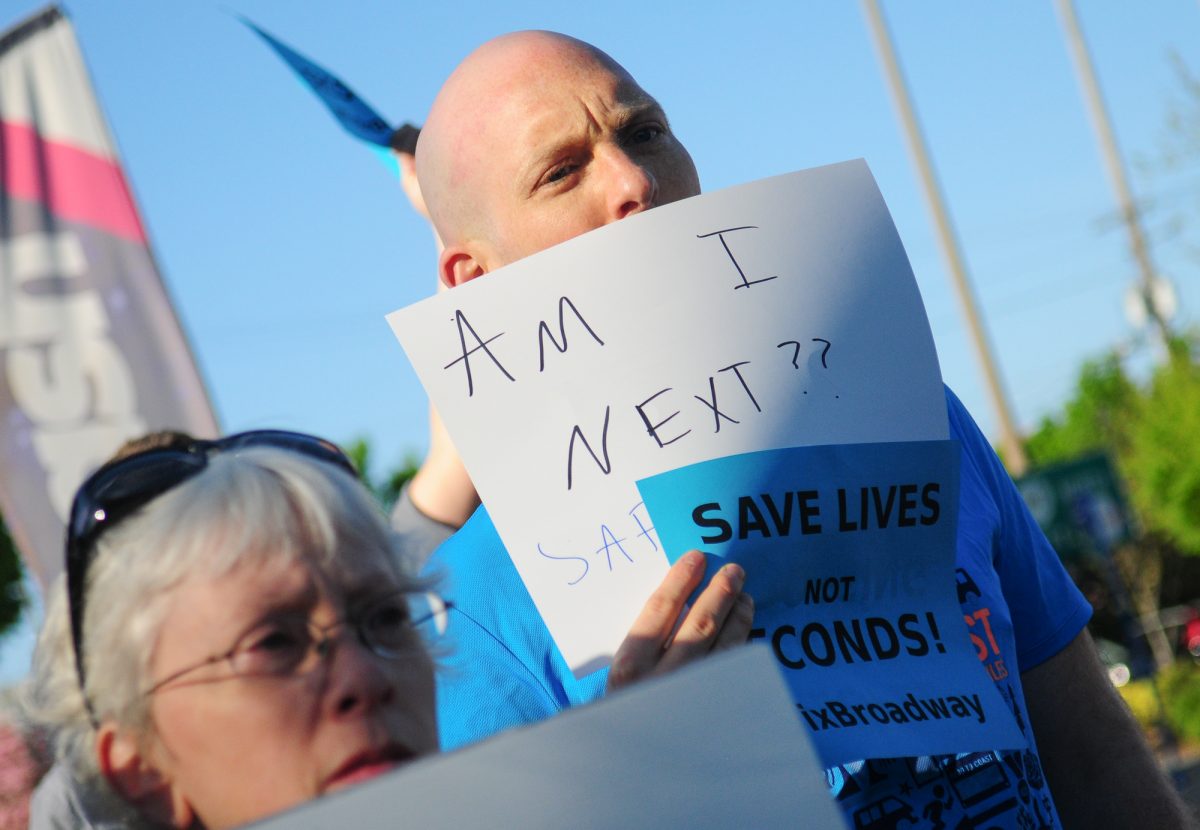 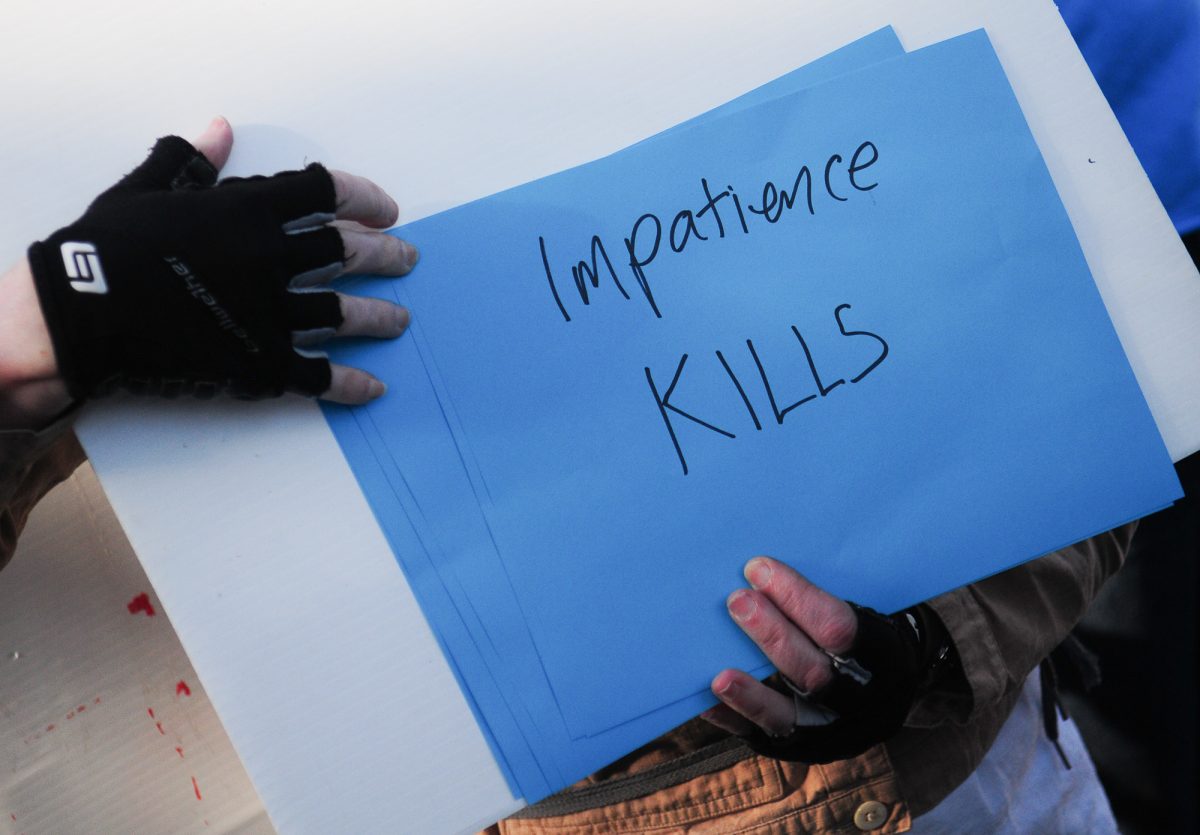 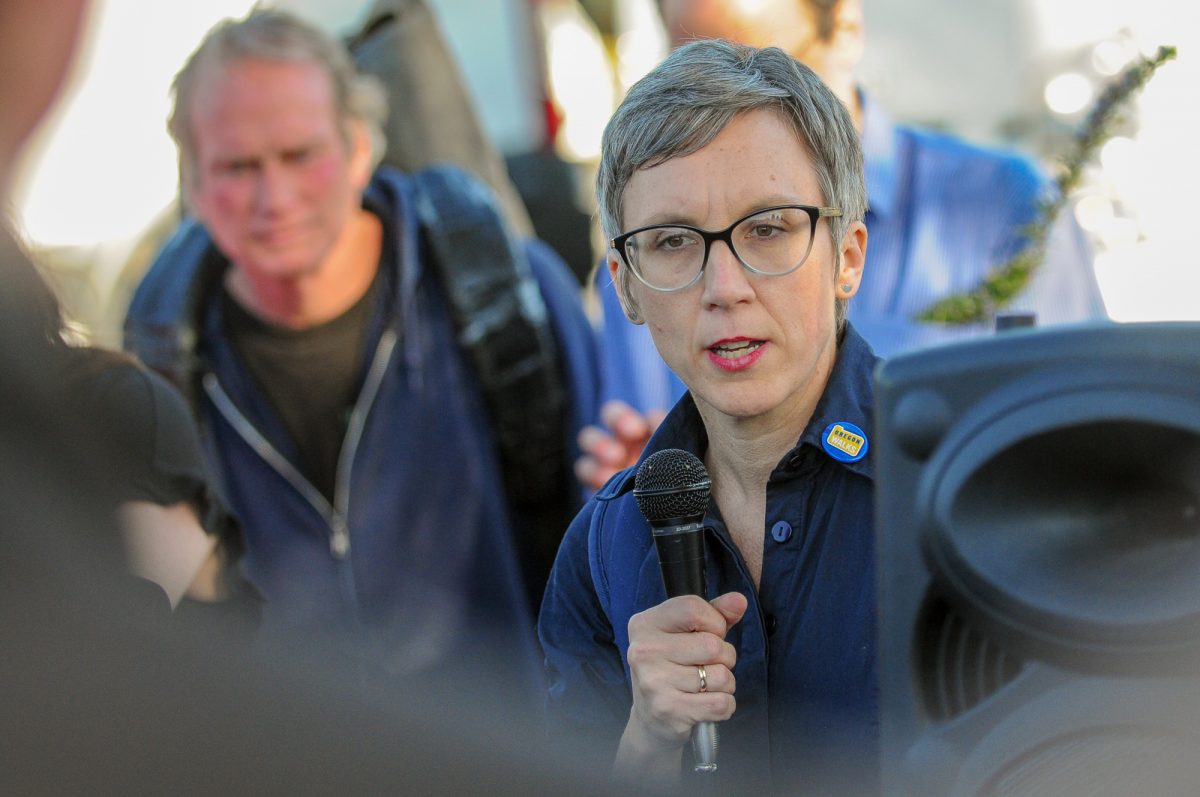 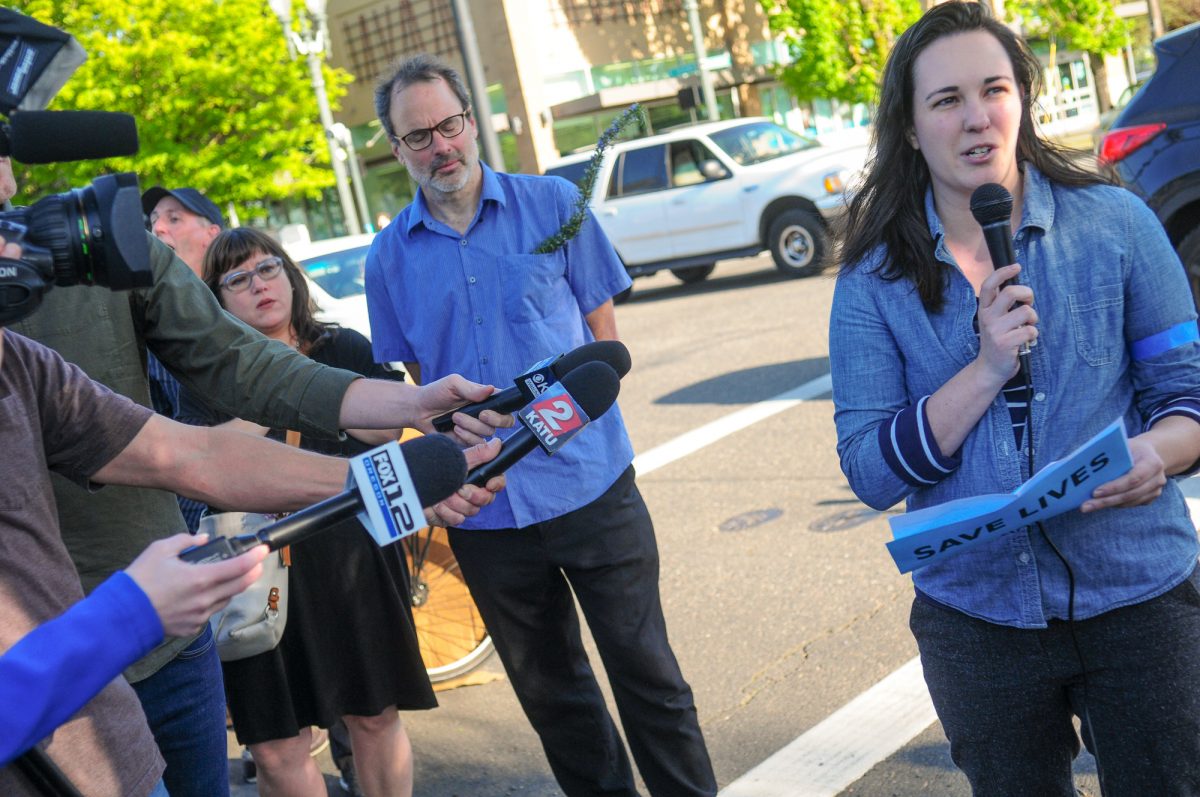 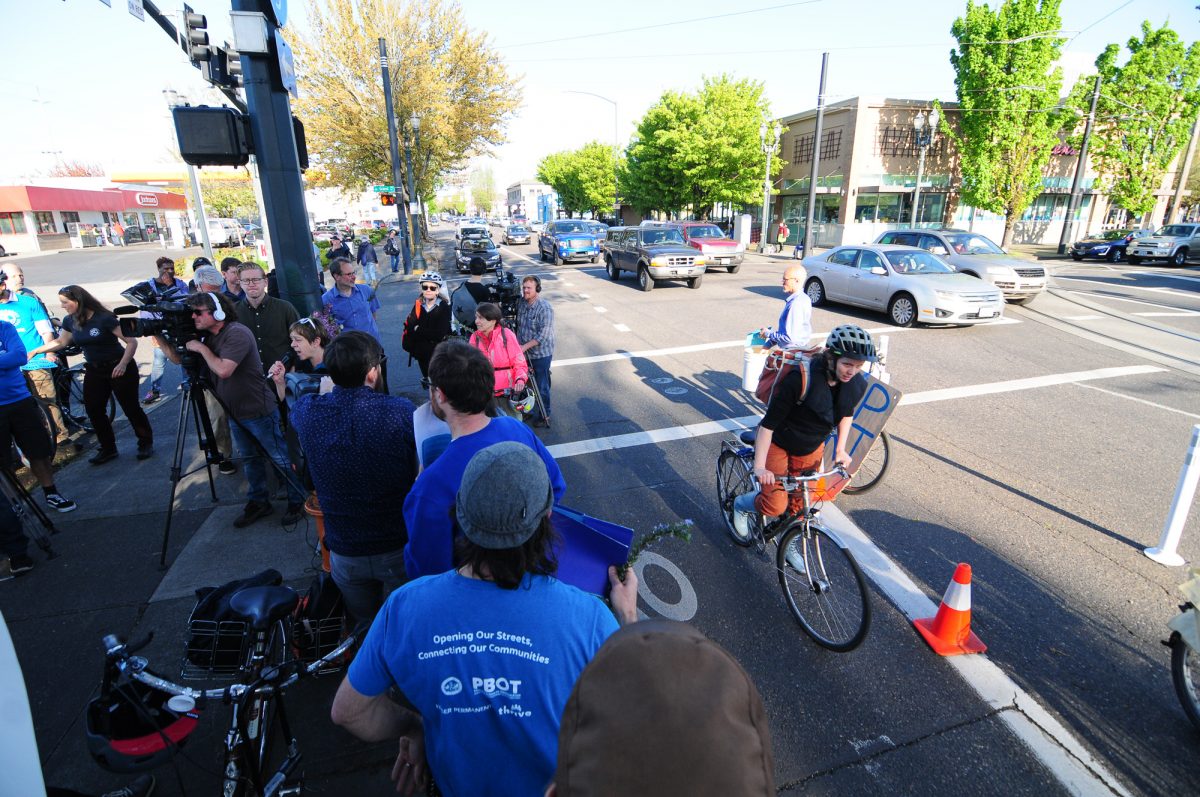 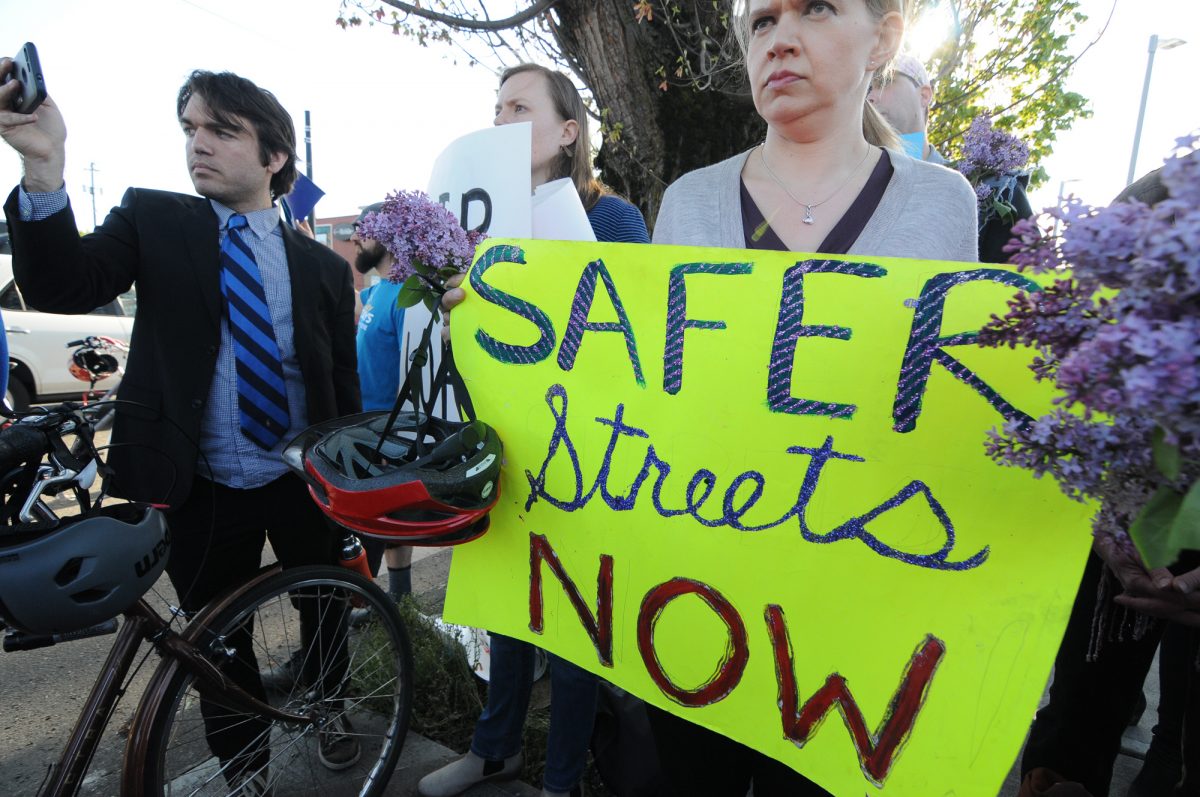 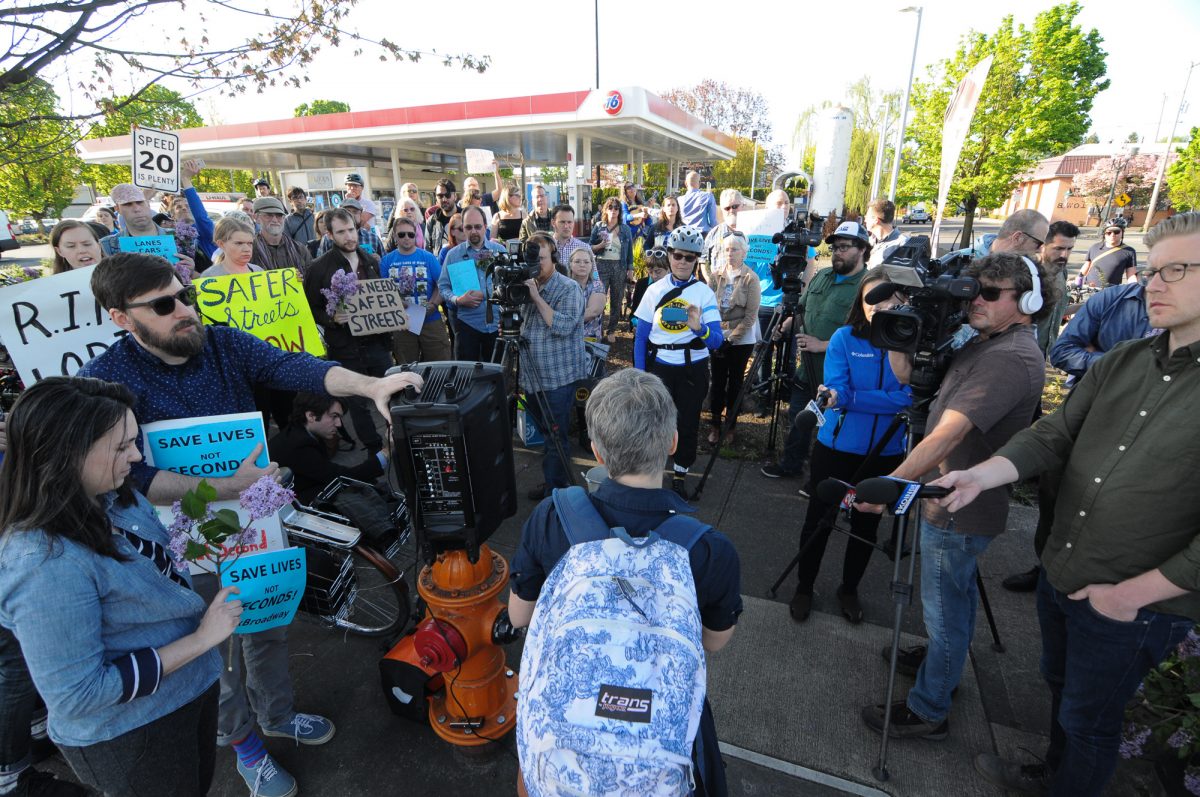 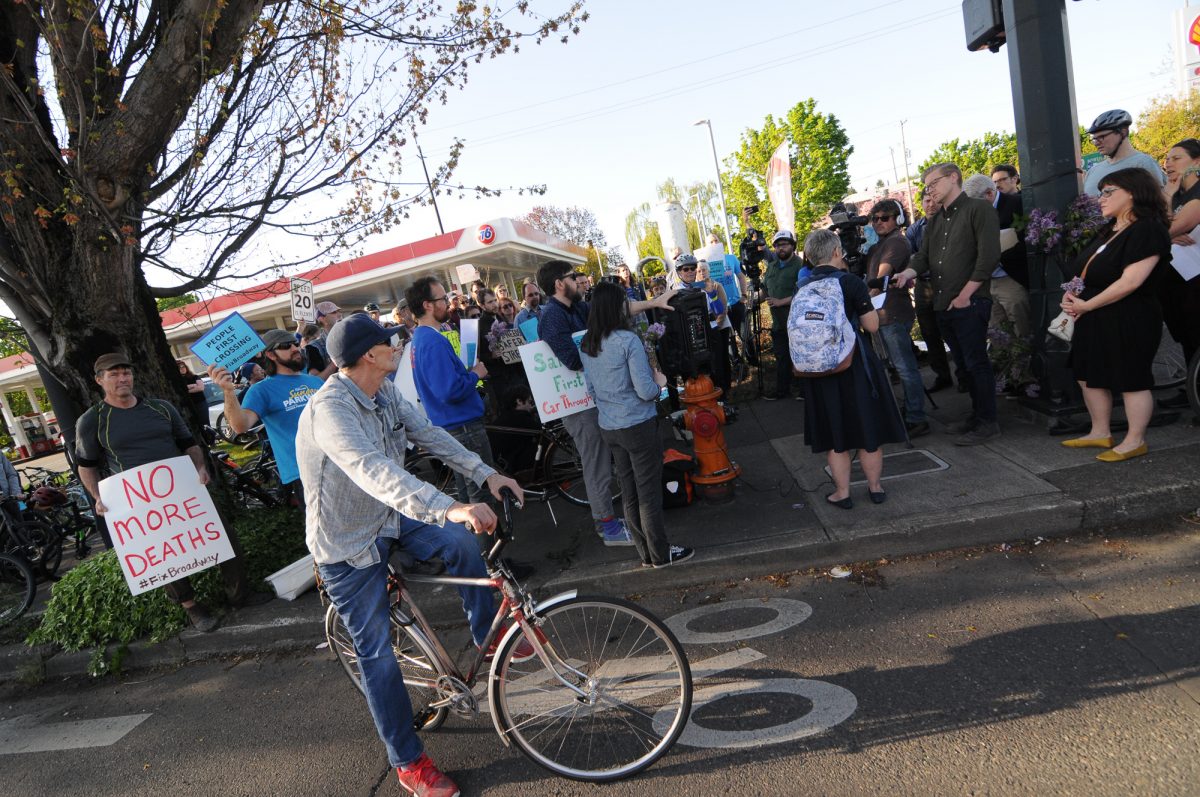 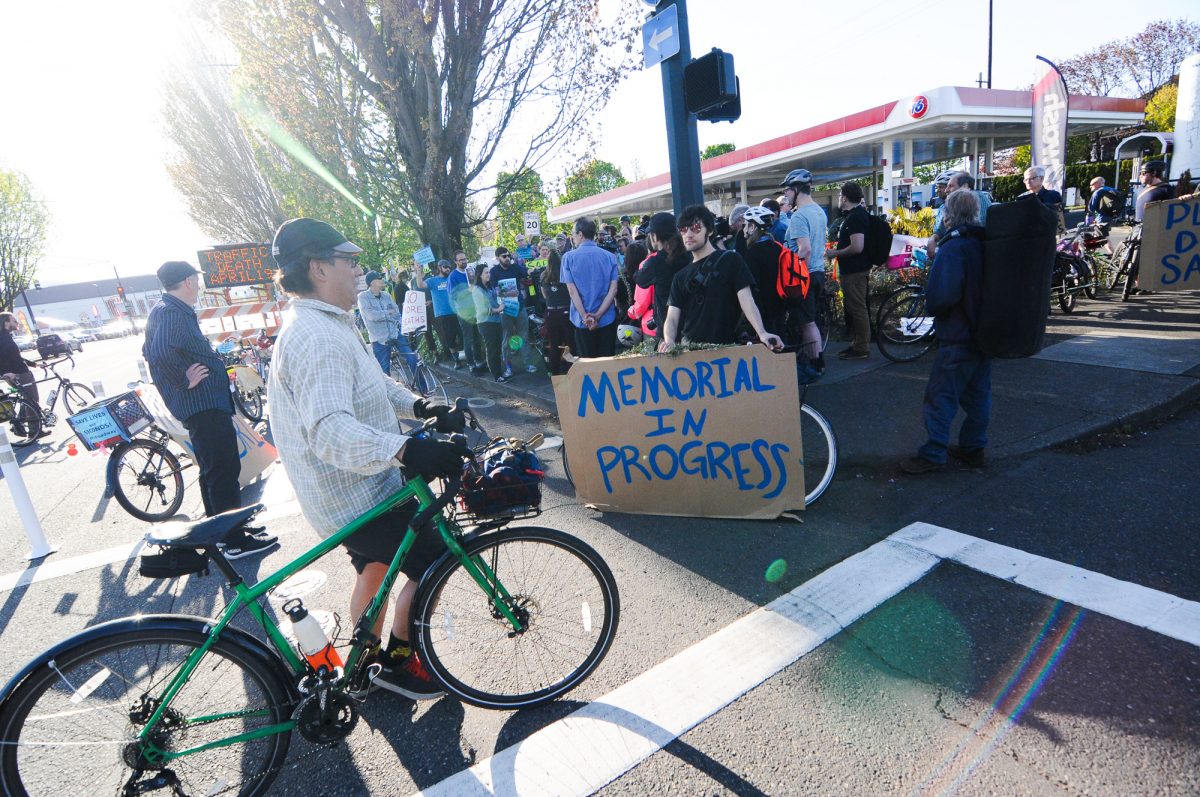 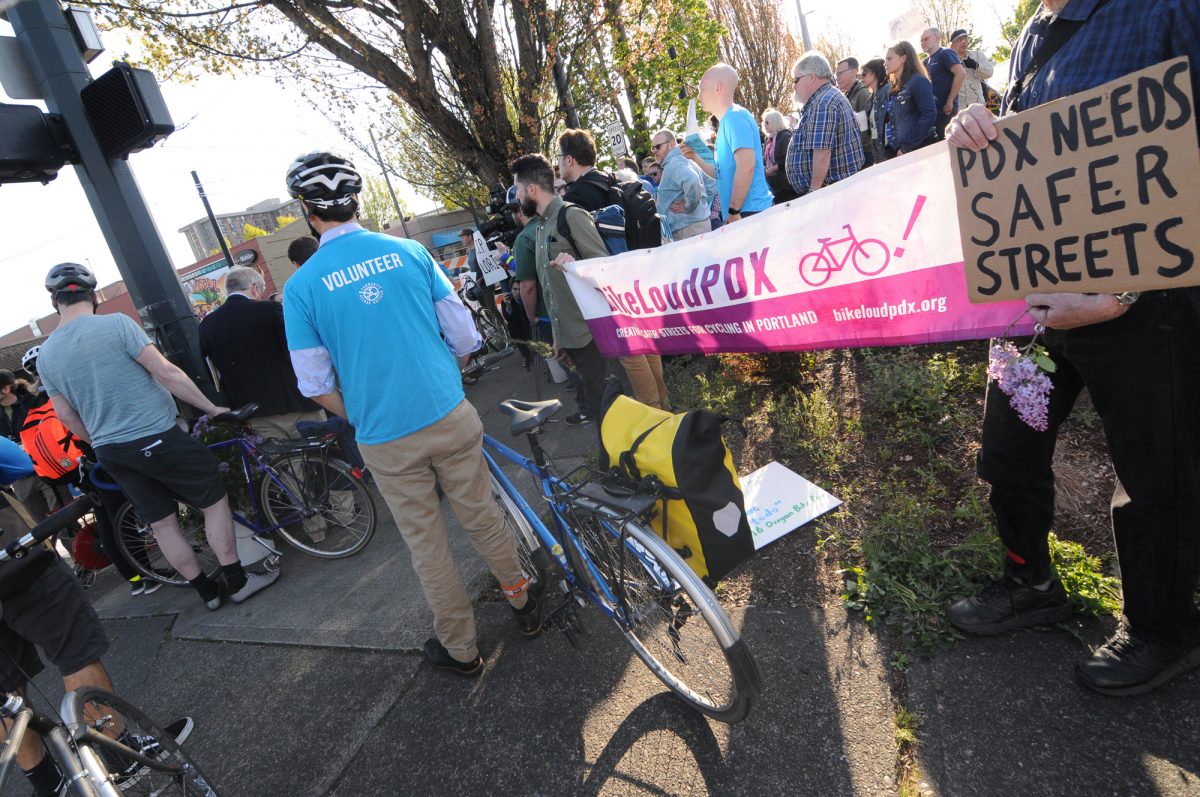 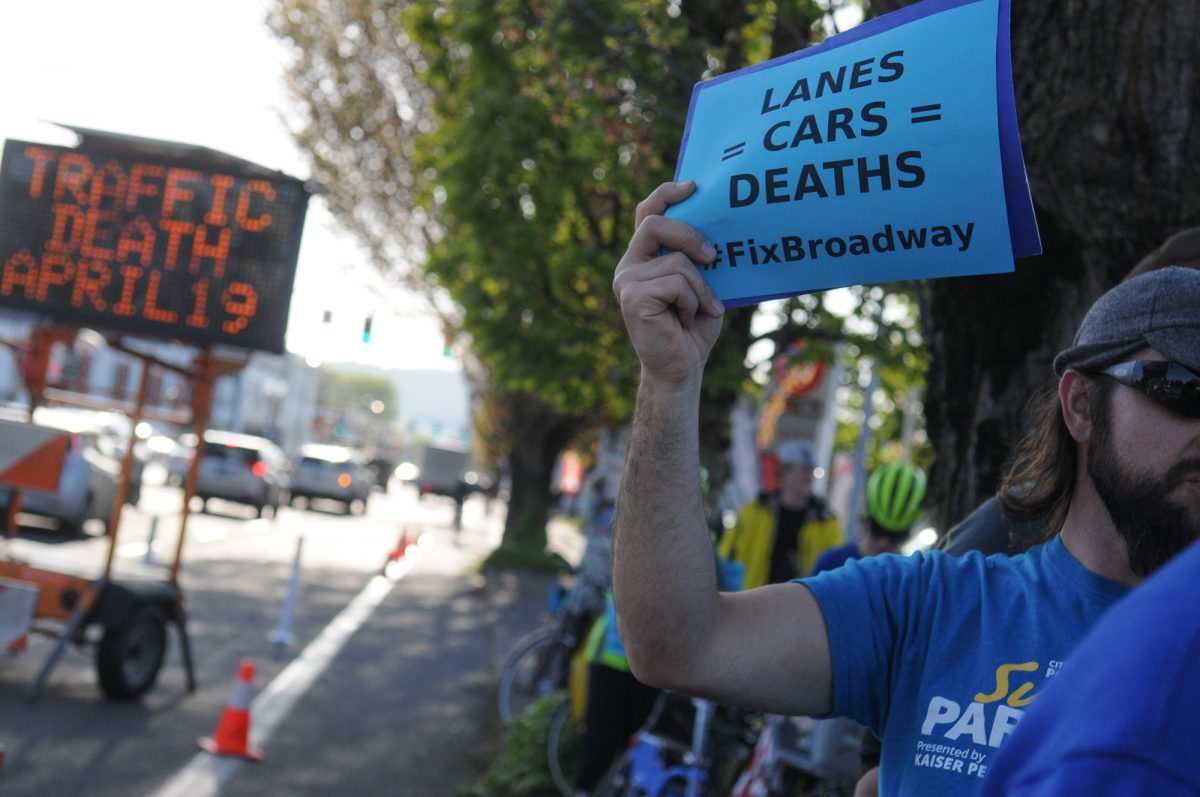 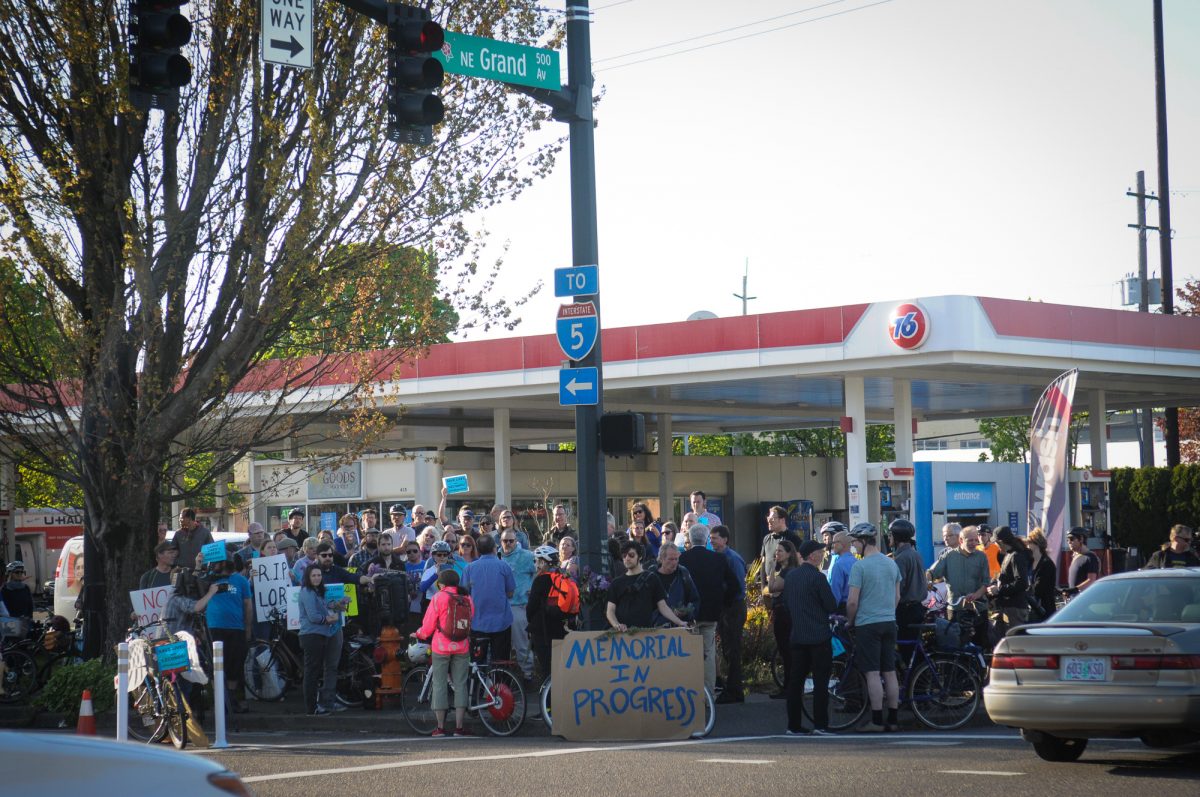 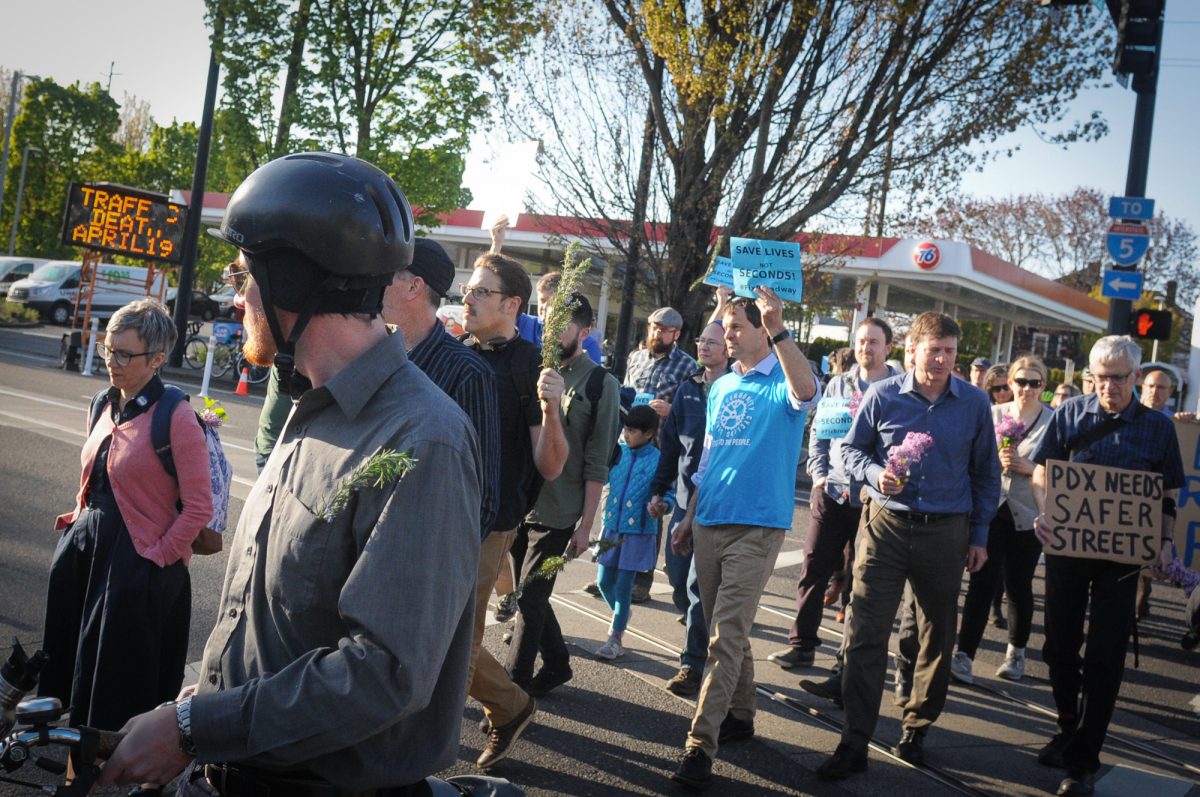 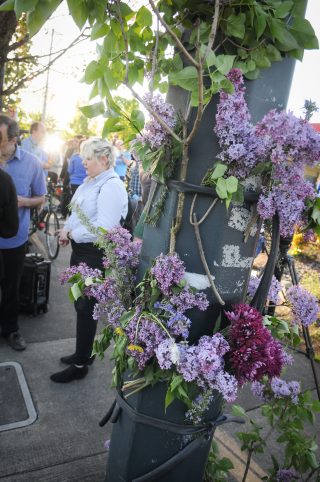 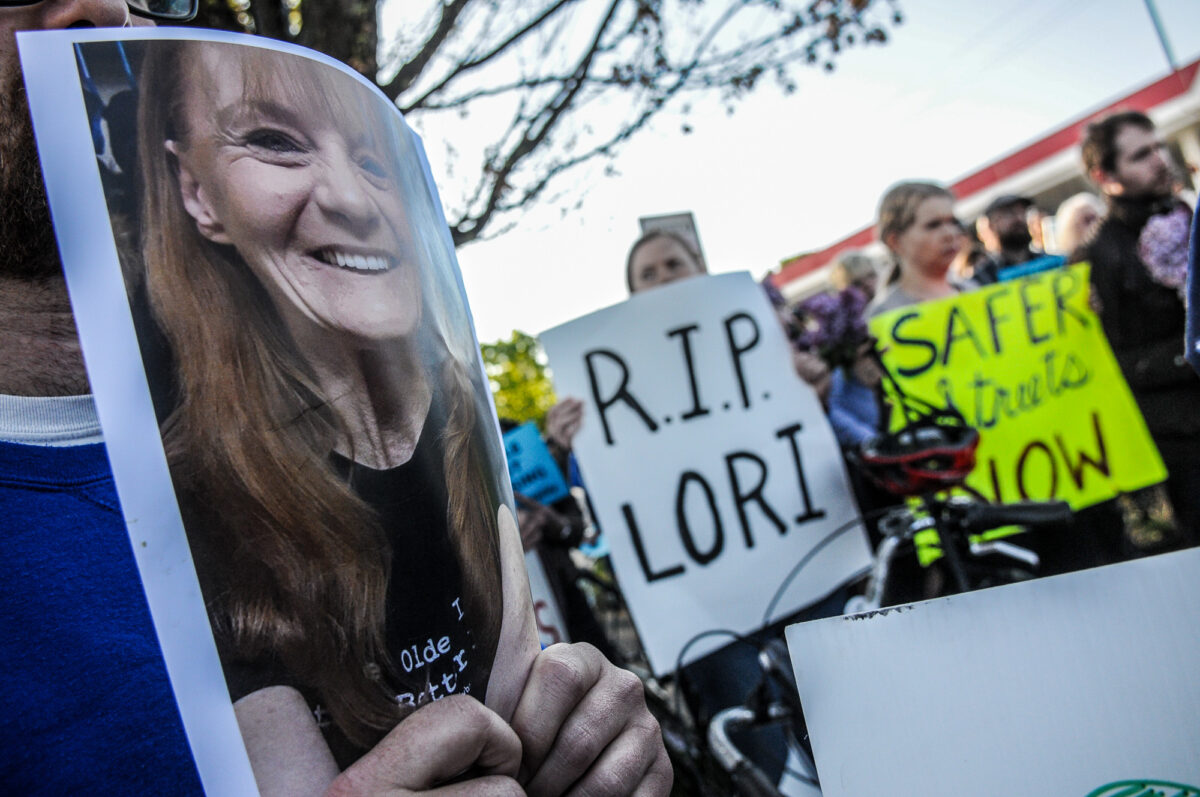 Thanks to Bike Loud PDX for pulling this event together and to The Street Trust, Oregon Walks and Community Cycling Center for showing up and offering support.

Everyone — if you weren’t able to come, but would like to voice your concerns about safety on Broadway and elsewhere, and support PBOT’s safety-oriented policy changes introduced at this memorial, please send an email to Commissioner Eudaly. Something like this:

There’s been a noticeable uptick in cars plowing through crowds gathered for one reason or another. Watch your back. Always be aware.

PBOTs decision to immediately respond with a potentially temporary redesign and signs is a huge leap forward. I hope they continue to do this at every collision, death or no death. Thanks PBOT!

The crash protocol is something I argued for a while back. I hope this is inclusive of all city roads irrespective of county or state maintenance.

This protocol does nothing for a single incident but it might get drivers and the bureau fed up just enough to take Vision Zero from policy to practice in their day to day.

So glad that the elected officials had a chance for another photo op in front of the cameras. Since they haven’t been able to fix the problem, maybe they shouldn’t be the one speaking, maybe they should show up to these and just do some listening.

Another pedestrian run over last night…

I was on Fessenden yesterday. Finally, finally, workers were cutting asphalt for the first ped island, and every other forthcoming treatment was marked for them to move onto after that. The timing may be coincidence (I know it was scheduled to start soon regardless), but this of course also comes immediately after a recent death and the new policy.

I’d much rather these tragedies never occur in the first place, but a quick and meaningful response is certainly an improvement.

Two more since then.

This is a welcome change from the silence of city hall that has surrounded VRU fatalities. Moving the needle on public opinion and perception is key to making progress. Electeds getting out in front of local news cameras and creating urgency is one of the most effective ways to counter misperceptions and encourage better driving behavior and support for safe infrastructure.
On the other hand, Wheeler doesn’t understand that his repeated silence and bland statements have been an endorsement of the status quo, in which a large number of people will assume that the victim is at fault, road design doesn’t influence behavior and risky driving practices like speeding and distraction are ok for them because they haven’t killed anyone yet.

Thank you BikeLoud, Commissioner Eudaly, PBOT Staff, Jonathan and everyone who spoke and showed up.

it will take much more substantive changes — like reconfiguring lanes, reducing driving space, and creating physical AND SIGNAL PHASE SEPARATION between drivers and walkers/bicycle riders — to prevent more deaths.

“PBOT will add at least ten LPIs each year to existing signals citywide. ”

This is no where near enough.

Installing an LPI is as simple as reprogramming a traffic control box at many intersections. In NYC, the average cost of the many hundreds of LPIs installed was a paltry $1200 — this is nothing.

PBOT rolled out LED street lights with remarkable speed once it became clear that the cost-benefit made financial.

Why are human lives so cheap in Portland?

What is a “protected left turn”?

Do any of PBOTs options include a separate phase for pedestrians, so they’re not trying to cross the street when cars are in motion?

At 10 LPIs per year, how many years will it take to finish all the LPIs in the city ?

We could also try getting rid of the “I didn’t see him/her defense.”

Three in one week…extrapolates to 156 in a year…where is LT when we need her?

Coming from the agency responsible for the infrastructure “travel with care” feels like finger pointing after a crash. Don’t tell others what they should do. Tell us what you are going to do.

“Emergency assessment of the site.” Good. Then fix it and every other place like it, too. Not just Broadway and Grand. Not just Columbia at 64th.

It’s great to see the rapid response, but there are so many cheap options that they could do now to make Broadway much safer and avoid the next fatality – prohibit turns on red, get rid of beg buttons so peds always get a walk signal, prohibit parking within 10 feet of an intersection. These are things that many other cities do in downtown/high density neighborhoods.

BTW, for the record. The steps leading to this tragedy did not wander the path of “we don’t have funds to fix this problem.” But rather the “we have funds, but won’t build it.”

* Staffer hired to implement protected bike lanes
May 2015 (PBOT was not in a hurry…)
https://bikeportland.org/2015/05/28/qa-rick-browning-protected-bike-lanes-downtown-portlands-future-143632

This type of problem is unusual. Most of the time PBOT says “funds are not available” to fix any given problem.

That PBOT had funds, and was unwilling to make improvements, suggests that the problem of fixing Portland’s streets is much more complex than simply getting more funding.

It also suggests that there are opportunities to ask for improvements that the bicycling constituency is not taking advantage of, by allowing ourselves to get brushed off with the “not enough funds” reply, and not digging around the edges looking for other ways of asking for improvements to be made.

This “digging” is a whole range of possibilities. Simply asking for something is one way. Talking to someone other than the project manager, and trying to spur things along, get upgrades, is another. Getting a PBOT staffer to come to your neighborhood meeting, then peppering them with other problems, and asking for a written response is another.

Lori Woodard was my best friend. It meant so much to me for so many people to come together for this. To say that I miss her is most definitely an understatement. I love you Lori Woodard. Now and forever.