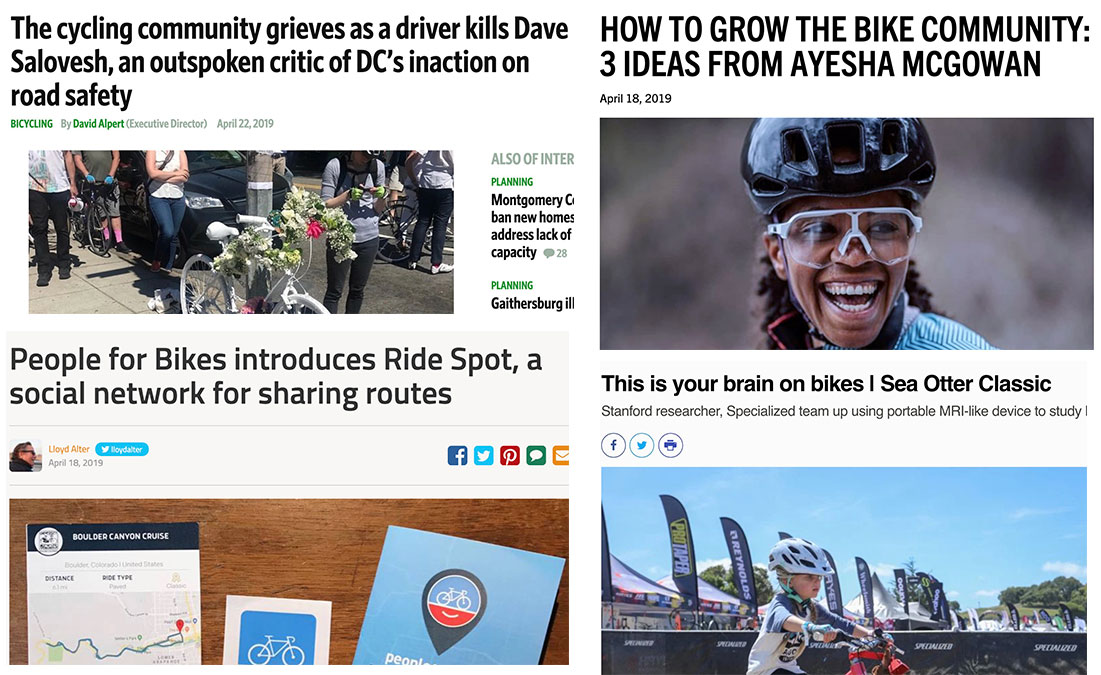 This week’s Monday Roundup is sponsored by the Oregon Coast Gravel Epic, coming to beautiful Waldport on May 4th.

I hope all your weekend dreams came true! Judging by the photos I’ve seen it looks like the spring weather was loved by all.

He fought against what killed him: Our friends who fight for bike safety in Washington DC are reeling after fellow advocate Dave Salovesh was hit and killed by a reckless driver on an unsafe street.

A more inclusive cycling scene: Ayesha McGowan (@AyeSuppose on Twitter) is a racer, but she is quickly gaining attention for her work in giving voice to people of color by calling out the bike industry’s blindspots.

A bike thief’s remorse: Crazy story from California where a repeat bike thief tried to return a high-end road bike to the shop he stole it from.

Camera enforcement: The State of Washington has one-upped Oregon with a law proposal that would allow Seattle to use cameras to issue citations to people who block crosswalks and bus lanes with their cars.

Climate emergency: The City of Vancouver BC wants to take action against climate change with a series of big policy proposals — several of which are directly related to getting people out of cars and onto bikes and transit.

Scooting drunk: If we figure out how to detect drunk scooter riders before drunk car drivers I am going to be pissed.

Cars kill: Forbes has a breakdown of how to deal with the global pandemic of road traffic deaths, which are now the top killer of people aged 5 to 29.

How low can they go?: Bike Snob has thoughts to share about why some Americans are so anti-bike they don’t even make sense.

In the article about using cameras to enforce laws against blocking crosswalks or bus lanes the opponents have invented a new straw man. Unlike red light cameras and tolls which are said to prey on the low income, these new cameras which would “gasp” prey on people from out of town.

it’s Ed Orcutt, buddy, the genius who claimed breathing hard makes more carbon pollution than an automobile. sadly, he keeps getting re-elected without breaking a sweat.

“Oh no! We mustn’t have any mechanism to enforce the laws which are on the books because we have collectively agreed they are in our public interest!” [wrings hands]

In regards to “A more inclusive cycling scene:” did anyone else notice no pics of minority person of color during Saturday Yamhill gravel fondo? African? Latino? Asian? Reviewing hotophoto gallery. Just wondering.

Chris I
Reply to  Nony

I don’t really like gravel, either. Can’t blame them.

Speaking of detecting drunk drivers. What is the best way to report a vehicle which you suspect is being driven by a drunk driver? I’ve had several near encounters but shrugged them off and continued on (this was before cell phones). I would be hesitant to call 911 only to find out later that the driver got pulled over for reaching for something in the passenger seat. However, it would weigh on my conscience if I had the opportunity to do so and the driver hurt someone later. Advice?

If you really think they’re DUI and clearly creating a hazard, then 911 is absolutely the way to go. I would only do it if I observed them being erratic for an extended time, i.e., they didn’t just wander in the lane because they were changing the radio station. I have made that call once or twice and response was swift; it might depend on where you are, but it seems this is something that police take seriously.

The woman in Park Slope Brooklyn complaining about four parking spaces being used for bicycle parking should really turn her attention to the NYPD building on Washington Avenue, where the NYPD painted angle parking spaces on the sidewalk so more of their number could park adjacent to the building (this is not a regular precinct). Or indeed focus on the number of parking placards issued by the De Blasio administration, which has reversed the excellent work undertaken by Michael Bloomberg’s administration in taking free parking away from every city worker as a given right.

When I lived in Brooklyn (2008 – 2014), most parents walked their children to school. Most people walked to the subway to take the train to work. Walked to do most of their errands. Most people in Brooklyn, especially in older areas like Park Slope, Williamsburg, Crown Heights, Carroll Gardens, Cobble Hill etc. don’t own cars.

It would not surprise me in the least if the woman in question is someone who lives in Nassau County and drives into Park Slope to work each day and complains that she can’t find free parking. There is, in point of fact, plenty of parking in that part of Brooklyn, you just have to pay for most of it (unless you are a city employee).

Regarding the article: “Unsafe Uber? Lethal Lyft?” I am not surprised, as I have told others before, When I am cycling/ walking in downtown Vancouver…most of the drivers doing really rash/ stupid driving maneuvers [before 2AM] are 9 out 10 times Uber/Lyft drivers searching and swooping in for a passenger. It was never this way back with old school taxi drivers.

Why do Americans hate bikes so much.
After consideration and study, I have a theory as to why some drivers are hostile to cyclists. Any car marketer will tell you there is no profit in selling transportation, they are selling ego. People sacrifice their money, time, health, and happiness to driving, all so they can feel powerful. Then they see a happy, healthy person on a bike, and they know it is all a lie. Drivers don’t like being exposed as weak and insecure.

I got a kick out of an article in Consumer Reports that said so many people are behind in their car payments — three months or more — that repo men are stuggling to keep up. And with the next economic downturn right around the corner? And with skyrocketing fuel prices vis-a-vis the current infatuation with SUVs and big pickups? Maybe this car thing is self correcting?

I wouldn’t count on it, at least not based on that article. the percentage of delinquent payments isn’t particularly high. the gross number of delinquent loans is high because the total number of auto loans has increased dramatically in recent years.

The Vancouver, BC plan to achieve “two-third of trips in the city by walking, biking or transit by 2030” to fight climate change is impressive. But I’m not sure about the electric car/heater stuff in the plan. All energy has its environmental impacts. Recent research is showing that some hydro power can have just as much climate impact as natural gas due to methane emissions from reservoirs. Of course, there’s also a big impact to fish and habitat loss. https://www.theguardian.com/global-development/2016/nov/14/hydroelectric-dams-emit-billion-tonnes-greenhouse-gas-methane-study-climate-change

Chris I
Reply to  Electric Costs

Read your own source:

“When considered over a 100-year timescale, dams produce more methane than rice plantations and biomass burning, the study showed.”

They were only looking at methane, not CO2. And natural gas is not cited at all.