Portland has miles of bike paths that are inaccessible to cars. We also have many people who call the land on and around those paths, home. A local nonprofit that provides them with medical care now has powerful new tools that will allow them reach more people, more often: bicycles.

Portland Street Medicine is a team of medical doctors, social workers, EMTs and volunteers who provide free care to people who live outside. Today at the northern entrance of the Springwater Corridor path in front of Splendid Cycles bike shop, Portland Street Medicine board members, staff and volunteers gathered to receive a new cargo bike. The bike was donated by Splendid Cycles owners Barb and Joel Grover — both of whom have seen many homeless people come through their shop over the years. Besides being a welcoming shop that often has its wide doors open, the Grovers installed a free, public water spigot several years ago that’s accessible 24/7. The spigot is well-known among people who live on the street.

“These bikes will give us easier and quicker access to places that are hard to get to.”
— Duncan Zevetski, Portland Street Medicine

It’s that spigot that brought Portland Street Medicine co-founder Drew Grabham into the Grovers’ shop. “We walked through their doors to introduce ourselves and get water and they said, ‘We want to help and give you a cargo bike.’”

“We had this frame and were looking for a nonprofit to donate it to,” said Barb Grover today. “These are work bikes and we want to see them working.” Barb’s husband Joel said they just want to help. “A parade of people come through our doors asking for help. So we see the need,” Joel said. “There’s sadness and happiness today. We’re doing what we can.”

In addition to a cargo bike outfitted with a lockable aluminum box, Portland Street Medicine has also received lights and other safe biking gear from River City Bicycles, four additional bikes thanks to a donation from Pedal Bike Tours and a box van from Daimler Trucks North America. The van will be outfitted with racks to the carry bikes. 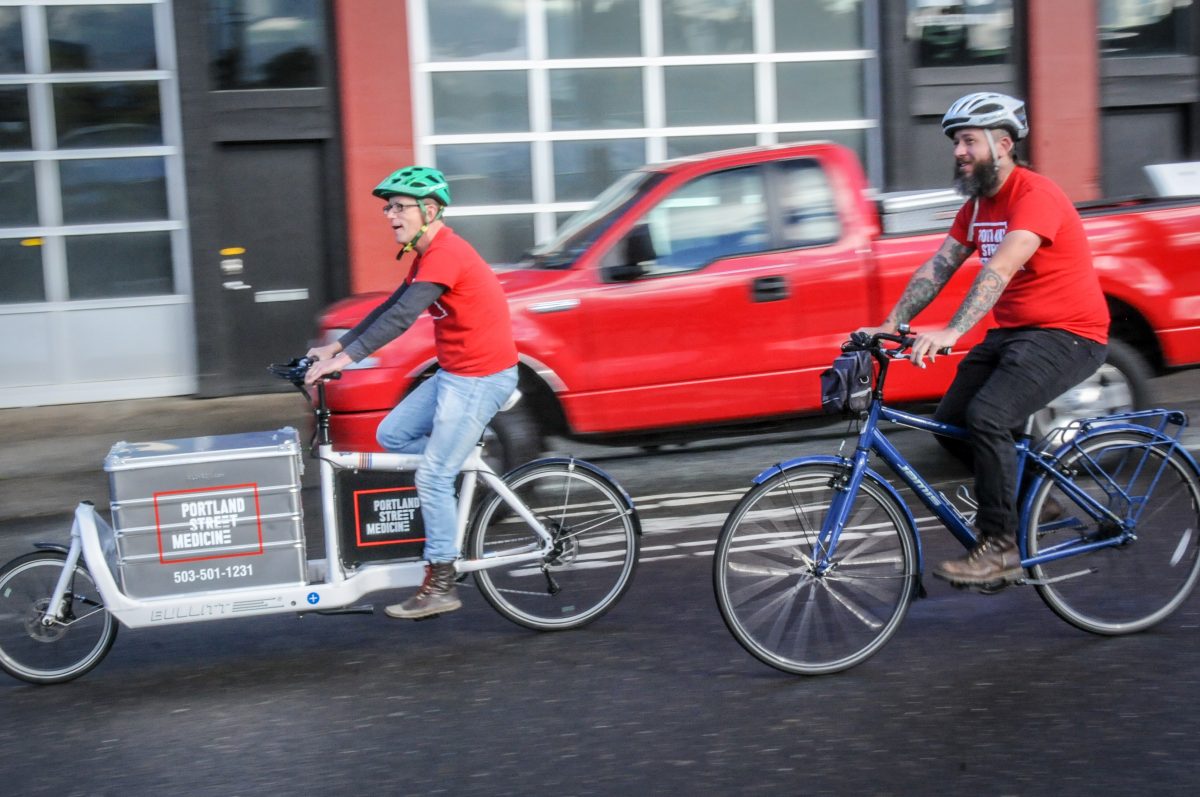 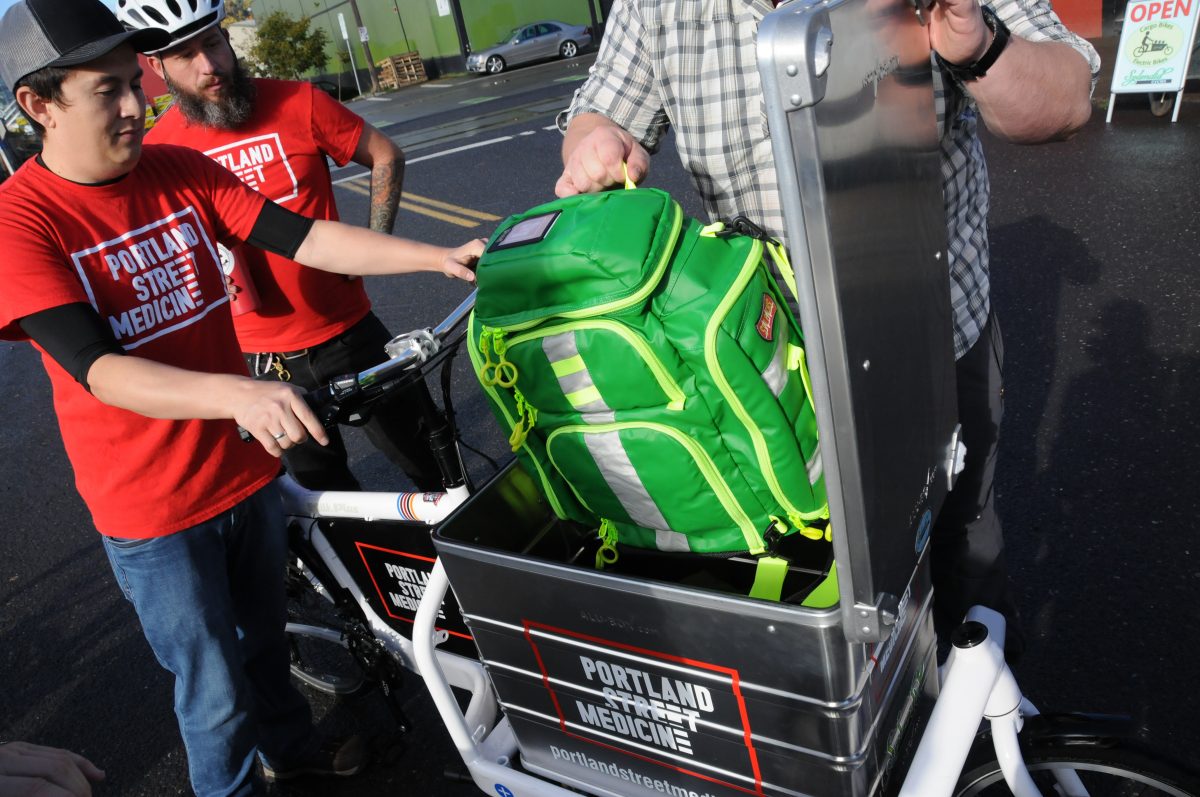 “These bikes will give us easier and quicker access to places that are hard to get to,” said Portland Street Medicine staffer Duncan Zevetski. The group already does frequent rounds in places like the Springwater Corridor and Eastbank Esplanade. But with bikes, they’ll be able to cover much more ground.

Volunteer Daniel Solchanyk pulled a large backpack out of the cargo box and explained how they carry supplies like gauze pads, ointment, sterile water, and other personal care items. He estimates they’ve cared for 400 patients since February. On a typical day they can reach about 20 people. Solchanyk said the bikes will probably allow them to reach at least 10 more people per day.

Solchanyk said they’re looking forward to using the bikes in partnership with Portland People’s Outreach Project, a needle exchange group that already uses bikes. “We’ve tagged along with them in the past, using our van,” Solchanyk said today, “And they’d beat us to every spot. It’s just faster by bike.”

For more on the great work this group is doing, check them out at PortlandStreetMedicine.org and make sure you give a wave, nod, or ring of your bell next time you pass by.

What a wonderful convergence of stories!

Thank you for covering this.

Mighty fine gesture on the part of the Grovers.

Yes – love Splendid Cycles, and Barb & Joel have always gone above and beyond in my interactions with them.

Thank you for covering this wonderful donation. We are so excited about the new bikes that give us the ability to reach so many more people in the community.
Learn more about us at http://www.PortlandStreetMedicine.org

Even if we (I fantasize) finally achieve universal health care, this kind of outreach and cooperation will still be needed. Thanks to all involved.

This is super cool!