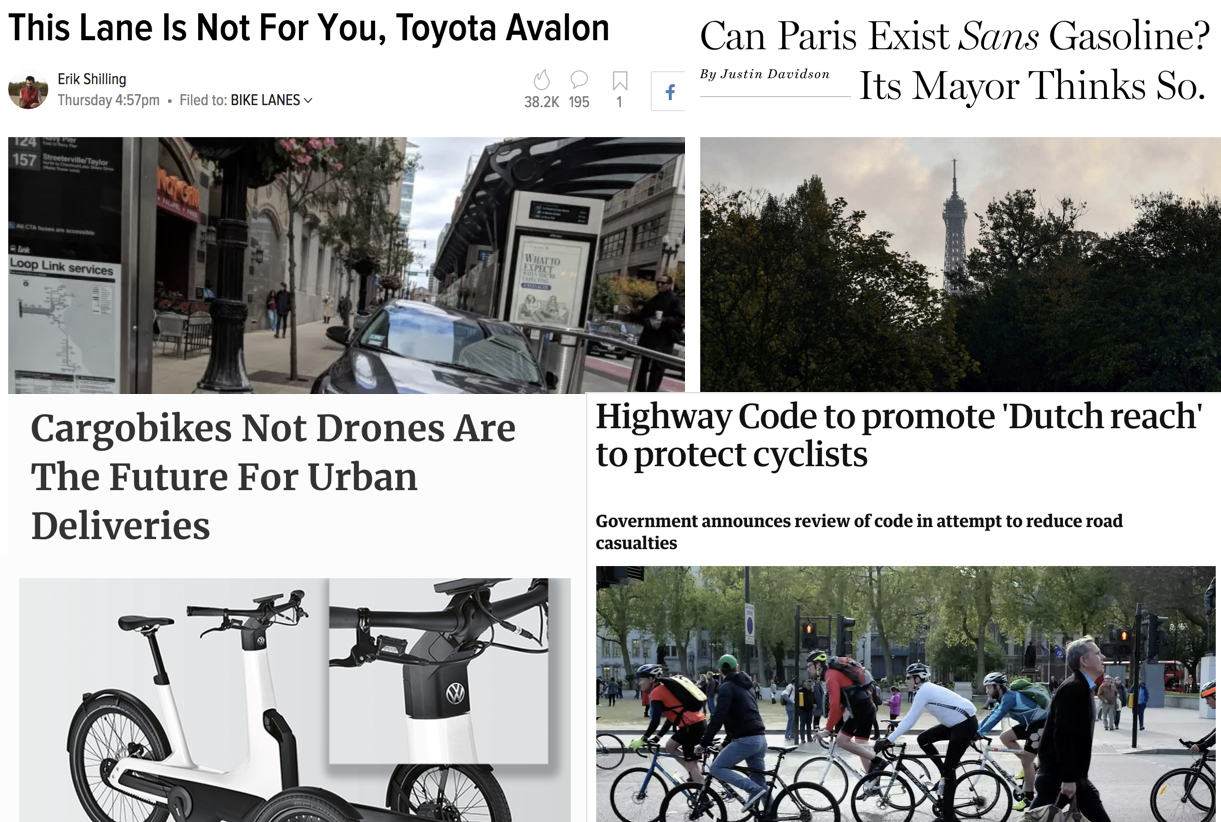 Transgender champion: Rachel McKinnon won a national championship on the track. Some say it’s unfair because she’s transgender. Learn more about her in this Q & A posted by VeloNews.

Cars as a safe space: A recent survey from furniture giant IKEA found that almost half (45%) of Americans go outside and sit in their car “to have a private moment to themselves”.

Paris leads on carfree cities: A massive effort to get unnecessary cars and trucks out of the city is being taken on by Paris Mayor Anne Hidalgo. Here’s more on the potential of that vision and why the politics are so hard.

Inspiration from Calgary: Portland could learn a lot from Calgary where a carfree bridge laid the foundation for a successful, quick, and relatively cheap network of protected bike lanes.

Portland is a “smart city”: Bloomberg Philanthropies has awarded the City of Portland $2.5 million to fund “smart city” projects that fight congestion and climate change.

Vehicular terrorism: Citylab delves into the disturbing trend of using automobiles as weapons of mass destruction and offers examples of how to prevent the attacks without making walking and biking worse.

Teach the reach: The UK Highway Code plans to add more instruction to improve the safety of bicycle users — including the use of the “Dutch Reach” which requires using your far hand to open your car door to prevent “dooring.”

Scooter lawsuit: Three plaintiffs who claim to have been hit by scooter users while walking have filed a class-action lawsuit in Los Angeles against Lime, Bird, and other scooter companies for what they call “gross negligence”.

No lane is safe: The fact that someone sandwiched their sedan in a green-colored, physically protected bike lane is a great example of why we need more carfree spaces in cities.

I certainly hope that if the class action scooter lawsuit is successful then the same standards will be applied to the auto industry as to the lack of care in protection of pedestrians. This would apply especially to the promotion and sale of lifted pickups and Suv’s that are clearly a deadly hazard to all vulnerable road users. If we allow the makers of 25 lb scooters to be sued out of business while allowing the proliferation of 5000lb death machines we are truly a civilization destined for the dustbin of history.

Middle of the Road Guy
Reply to  bikeninja

I guess I’ll stick with 4,999 pound death machines to avoid the lawsuit.

GlowBoy
Reply to  Middle of the Road Guy

I think 5000 pounds was being posited as a representative weight, not as a legal threshold in a lawsuit.

Middle of the Road Guy
Reply to  GlowBoy

I think “Death Machine” is not really representative, though. It’s like calling all liberals “ANTIFA”.

soren
Reply to  Middle of the Road Guy

The absolute horror of being anti-fascist…

GlowBoy
Reply to  Middle of the Road Guy

Maybe you grew up in Oregon, where Drivers Ed is (still!) not required for young license applicants. But I grew up in a Drivers Ed state, and received driver training as part of my suburban public school curriculum. Besides all the nitty-gritty of the mechanics of driving, we had two broader lessons drilled into us, day after day, to convey the great responsibility involved in driving.

1. Driving is a privilege, not a right.
2. Motor vehicles are deadly weapons.

So maybe it’s news to you that cars are death machines, but to many it’s established wisdom.

Because rental cars have been around for quite some time, laws regulating liability are well established. The only reason I can see this lawsuit taking a different course is because the e-scooter industry is not a political force on par with the auto industry.

The Ikea survey reminds me of how I have often used a bicycle–and I’m probably not alone there.

Heck, I’ve used a car for a private “escape space” lots of times, though in recent years I’m more likely to get the same mental break by going for a walk or a bike ride.

The IKEA story makes it sound like people are escaping their homes. Personally, I’m more likely to do this to escape work than my home.

B. Carfree
Reply to  Dave

You are correct in assuming you are not alone in using your bicycle to escape and have some privacy. Just yesterday I rode out into the coast hills for some solitude and stargazing.

Middle of the Road Guy
Reply to  B. Carfree

Take any gravel to get there?

Jonathan, your byline for Ride Hailing = Congestion is misleading. The story says that ride hailing accounts for 50% of the increase in traffic congestion, not 50% of the total.

I sampled Calgary’s bikeway network 2 years ago, and was impressed. Kudos to a city supposedly dominated by the oil industry (the logos of companies like Shell and BP unapologetically gleam from the tops of their downtown skyscrapers) for getting this done.

Overall the on-street bike lane network isn’t as good as Portland’s, but Calgary had more protected lanes than Portland at the time, and they mostly seemed to work well. And the off-street bikeway network – over 500 miles of it, IIRC – blows away Portland’s (as of course does the network here in the Twin Cities).

This is a human solution to a problem technology is already solving for us. ‘Exist assist’ where an approaching vehicle or cyclist is detected and a warning issued when the door is opened, is quickly finding its way into new cars. Teaching safer practices is always welcomed, but I’m more optimistic about technology that takes humans out of the equation.

I’ll celebrate the day they make a car that disallows it to destroy another human.

The odds of a car door opening as I pass by are small. However, since the downside of being doored is so large, it won’t matter to me whether they go down by ten-fold or not. I can’t get doored if I’m not in the door zone, so I won’t be there.

A better use of funds and energy than attempting to train drivers to not open doors into cyclists would be to remove all door-zone bike lanes.

Ok I have to laugh at the Oregonian’s caption “Bike traffic along Southeast Water Ave “- I see one bike and, at minimum, 17 private motor vehicles.

From interview with Rachel McKinnon:

“This study showed there is absolutely no relationship between testosterone in terms of performance in males.”

“Also, we have evidence, thanks to Dr. Joanna Harper, that when you take someone who has a given level of endogenous natural testosterone, and you reduce that — through such things as like hormone suppression therapy, or the loss of a testicle, or menopause — when you lower someone’s natural testosterone their performance goes down.”

One thing that maybe there has been research into but I would find interesting is seeing if trans women could compete at an elite male level before any hormonal transition to female. If someone were an unremarkable athlete against a male field but then brought themselves within the testosterone limits of female competition and now are a world champion that would be suspect to me. For example: there are local racers that identify as female or gender binary but have in no way transitioned physically from male. They obviously race in the Open (or traditionally “male”) races and are quite successful regionally or even nationally in the past. Now, if they were to transition via hormone therapy and suddenly jump to being significantly more competitive against women nationally or even internationally…. that is what I am wondering could provide some insight to what it seems is a not well understood area of performance (based on this article and other recent Olympic rulings).

I try and reserve judgment on this but some of her outright claims regarding significance or rather insignificance of testosterone as a performance indicator were surprising to me. She brings up sports where the performance gap is falling yet these sports are much more endurance based than sports like weight lifting or sprinting. Her arguments regarding other natural advantages in sports like height which in my mind is too simplistic and a bit of a stretch that I think harms her arguments credibility.

Example for my later point:

“We have no evidence at all that the average trans woman is any bigger, stronger, faster than the average cisgender woman.”

We’re not talking about the average here we’re talking about elite athletes. She even admits earlier that all elite athletes are in some ways “freaks” (her words not mine). Also being “bigger” or “stronger” isn’t necessarily always a strong indicator either in a sport like cycling. Some areas like this throughout the interview where I was left saying “…well true, but that’s slightly misleading regarding the point we’re talking about”.

Alright, enough man-pinion on that for now.

My problem with current policy is that it is all being based off of research that’s really only been done in 1 sport. Every sport has different demands, with different things providing advantages/disadvantages. We don’t have any research outside of running regarding this. (and at that the study they reference has a very small sample size) I’d bet good money that if you did you’d find serious advantages in some sports, and absolutely none in others. Depending on the nature of the activity. I also wouldn’t be surprised to see that it varies depending on the event in the sport. For example track sprinting vs track enduro or even road racing.
Now we do have the case of Jillian Bearden that suggests that the decline in performance is significant enough to bring trans women into roughly par with cis women. However, again, we run into the sample size problem. It’s hard to base policy off of 1 case. Also, again, this is road cycling, which as we know favors a much different physiology from track, especially track sprinting.
While I respect and understand the desire for simplicity in the rules, my instinct tells me that in the future, once there is more research, they will become more complex and more event specific. That being said, I do really like that USAC has decided to keep the lower levels more inclusive and welcoming. We need more people in the sport. While there are ways to “game the system” with that policy, I doubt it will be an issue. I personally don’t mind racing against trans women. (and indeed have raced against them several times) The only time it’s ever really bothered me is one who was a safety hazard with the way she rode with the awful attitude off the bike to match. At which point I don’t care if you’re trans, cis, male, female, purple, my evil twin, or whatever, I don’t want you at a race with me.