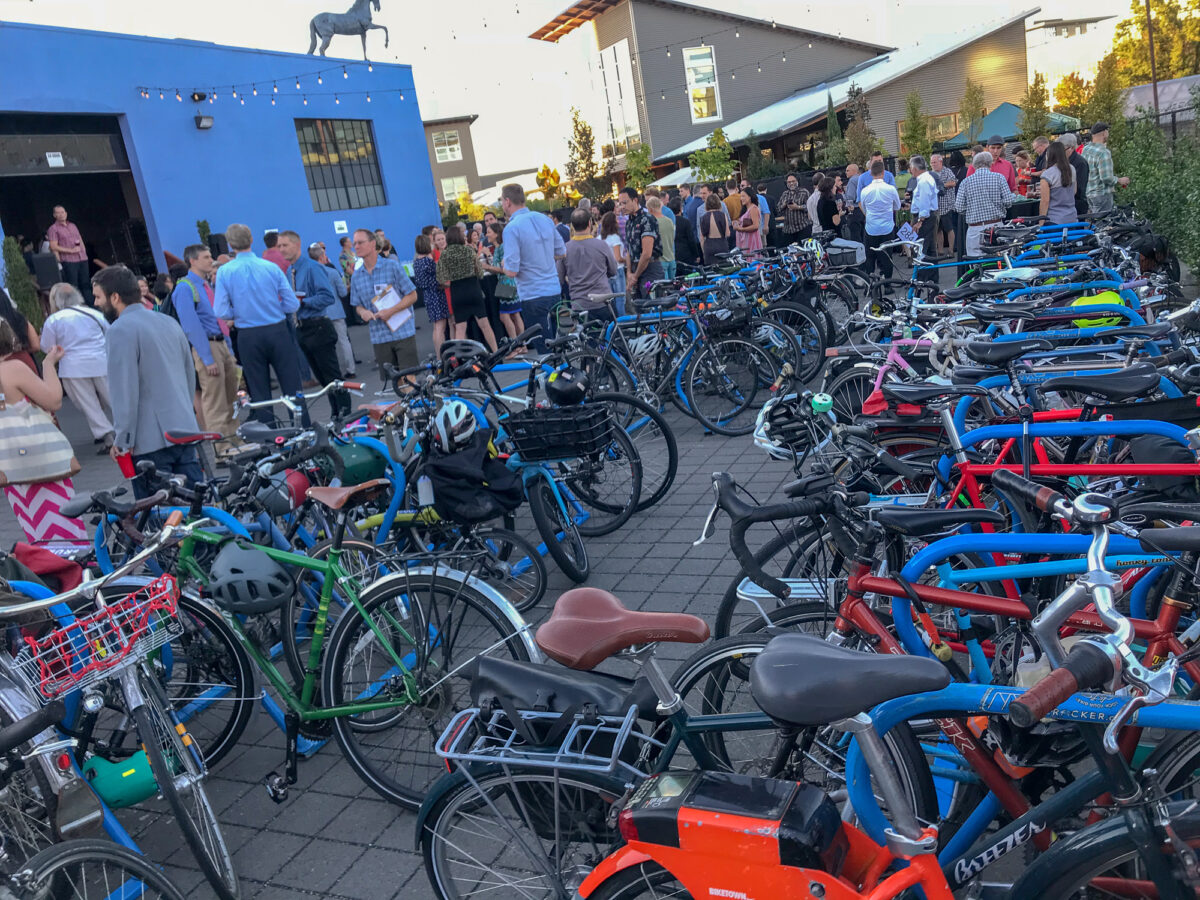 Only when most people arrived by bike could you have a parking area that actually contributes to the pre-event mingling.
(Photos: Jonathan Maus/BikePortland)

“The Alice Awards are cool again,” said an attendee at Friday night’s Alice Awards gala hosted by The Street Trust. 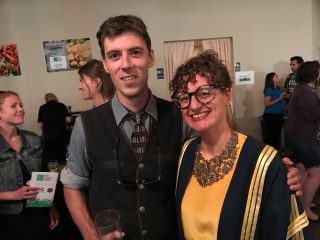 The annual gathering has been a staple for many years; a date circled on the calendar of agency staffers, activists, electeds, industry leaders, and civic do-gooders. But there have been times in recent years when the event seemed to have lost its mojo. It started when the pendulum swung too far away from honoring advocates and too close to raising money. Small decisions like announcing winners weeks before the event in hopes it would lead to more ticket sales (if you know you’re going to win you want to make sure your friends/family are there to see it right?); not allowing winners to make speeches; and an overwhelming number of auction items (and the time — and blaring auctioneer — needed to sell them all), sapped the fun away.


But something felt different on Friday. Maybe it was the venue; an open and airy warehouse in the northwest industrial district with a large outdoor space that was perfect for pre-event mingling. Maybe it was the more casual foodservice; all-you-can-eat small plates available in themed stations crafted by (friend of the blog) Spin Events and Catering. Or maybe it was all the new faces at The Street Trust; the 13-person staff is 100% new compared to just a few short years ago.

Whatever the reason, I’m here for it.

Our transportation advocacy ecosystem desperately needs a large, well-funded and entrenched nonprofit that can flex muscle at the local, regional, and statewide level. The Street Trust is the natural fit for that role and the better job they do at it, the healthier our ecosystem will be.

The Alice Awards has always been a proving ground of sorts for local politicians. They have a chance to rub shoulders and grab the ear of some of the most dedicated advocates in the region. On that note, it was notable that the role of emcee for the night was taken up by Multnomah County Commissioner Jessica Vega Pederson (I can’t ever recall an elected official having this role at the event). A former state legislator, Pederson has been popping up everywhere lately and has thrust herself into her role as the County’s go-to elected official for all things transportation. And people have noticed. When recognized by The Street Trust Executive Director Jillian Detweiler, chants of “JVP! JVP! JVP!” rang out. 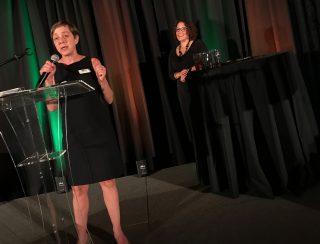 We need these folks in the room. Nonprofits that work on other issues have gala fundraisers too. If we don’t, it’d be that much easier for powerful policymakers to forget about us. If these electeds don’t respect (and fear, to some extent) The Street Trust and the rest of us around this table, they won’t be willing to shoulder the political risk needed to change the transportation status quo.

In her remarks, The Street Trust’s Jillian Detweiler asked the crowd to consider what things would be like without her organization. “If there was no Street Trust,” she said, “the movement to make walking, biking and transit safe and convenient would not have a persistent, credible, principled voice making a difference in policies and projects small and large.” Detweiler used the words “active”, “fierce”, and “inclusive” to describe the type of work it will take for The Street Trust to, “achieve the future we want.”

Detweiler named three main priorities her organization plans to focus on in the coming year: Metro’s 2020 transportation bond (via the Getting Together Coalition), the City of Portland’s Enhanced Transit Corridors (which she calls the “Get buses out of traffic now!” plan), and Vision Zero.

But enough about politicians and professional advocates. At their core, the Alice Awards is about volunteer activists who go the extra mile. This year that honor belonged to Gladys Bikes owner and founder Leah Benson and the co-founder of Ride Report, William Henderson.

In her acceptance speech, Benson said the responsibility to serve women, trans, and non-binary people belongs to all of us, not just niche businesses like hers. For Benson, it’s all about bringing new people into the fold. “It’s important for all of us to take advantage of our resources, power, access, and privilege to bring new people to the table.”

Henderson also spoke of using what he has (“time, treasure, and resources”) to do more for the community. He left the audience with a call-to-action. “Ask this question about yourselves: What more can I do?… The capacity to give in this room — not just money — is enormous. Maybe even infinite.”

Here’s hoping the Street Trust is getting back on the tracks and getting over the Janet Jackson Syndrome(*) they’ve suffered in recent years.

Detweiler does not have her eyes on the ball.

They are irrelevant… You must have got in free…
I cannot think of one thing they have done or advocated for me as a cyclist for ten years.
Name a few….
Beside bilking taxpayers for Ride to school funding (I live by a large NE school, I have not seen one thing they have done and very few kids ride to school in a safe to ride neighborhood).
Just name dropping…
Feel free to print this.

“If there was no Street Trust,” [Detweiler] said, “the movement to make walking, biking and transit safe and convenient would not have a persistent, credible, principled voice making a difference in policies and projects small and large.”

I’m never sure if I want to commend or condemn The Street Trust/BTA and PBOT. The historic relationship between them has been symbiotic to say the least, maybe even incestuous, given their overlap in “volunteers”. Both were instrumental in making Portland a national leader in bicycling in the 90s, but both have equally been prominently responsible for the slow growth and gradual relative decline since then, as Portland has become a city with diamond-level ridership building bronze-level facilities. PBOT implements the policies that ST/BTA wants, while ST/BTA acts as a screen for the policies that PBOT wants to implement – who’s the chicken and who’s the egg?

This piece reminds me of People magazine or something the Oregonian would feature in their lifestyle section. It’s good that people of color are being photographed, but it’s rather hard to not notice that everyone in the background looks overwhelmingly white. It’s all fluff and no substance.

Yeah looks like a fun feel-good event. Seldom does it lead to much change for people who really need it though.

Your friendly reminder that the Street Trust supported the bill that included the bicycle sales tax because it gave them money for Safe Routes to School. How can an advocacy organization faithfully represent its constituents when they are being directly funded by the government they supposedly lobby against?

So many negative comments…

I’m happy that Leah Benson was awarded. Congratulations Leah. Thanks for your good work in helping to make Portland a great place to live and ride! And your shop is the best too!

The 2016 transition from “Bicycle Transportation Alliance” to “The Street Trust” has broadened the organization’s focus from “bike” to “bike + ped + transit”.

A more complicated mission may sometimes force trade-offs: e.g. give up a little on “bike” to get a lot more for “transit” or vice-versa.

With the broader focus needs to come development of a broader support base. I wonder where The Street Trust is in making that transition. In Portland, cyclists are a somewhat well defined identity group with a certain tradition of activism and advocacy which has a central online community – I’m speaking of BikePortland of course.

Is that the case for pedestrians and transit riders? I don’t get that feeling. “Pedestrian” is a very diffuse category. Transit riders might be a better-defined group, but how much of a sense of identity do they have as transit riders? I may be exposing my ignorance, but AFAIK there is no WalkingPortland.org or RideTransitPortland.org to catalyze and connect advocates for walking or transit.

[Hey J. Maus, there’s an idea for you, how about creating some ped/ride blogs in the BP mold?]

Anyway, what I’m getting at is, The Street Trust may not be able to sustainably pursue its broader “bike + ped + transit” focus if it is relying for grassroots support only only the “bike” part.

What is TST doing to raise its profile and build a strong grassroots base of support in the ped + transit community?

[Maybe TST should join forces with, ahem, someone to start up the hypothesized blogs?]

If TST doesn’t build strong grassroots support, there won’t be any reason for the power structure to “fear” it. Then TST risks becoming the *token* bike + ped + transit advocacy organization, that gets included in conversations for appearances’ sake but doesn’t have as much real influence as it needs to have.

The first law of citizen advocacy is not to bring in ancillary issues, for these distract from and diminish the drive for the core issue.

I learned this from a marvelous environmental advocate, Janette Egger, when working with the Oregon Environmental Council in the 1970s. Jan led us to noise regulations both for the state and the city, and these are still in place, working very well for all of us.

“Detweiler used the words ‘active’, ‘fierce’, and ‘inclusive’ to describe the type of work it will take for The Street Trust to, ‘achieve the future we want.’”

Detweiler’s emotionalism rips “Janette’s Law” to pieces. It’s all about her and has absolutely nothing to do with improving cycling. To the contrary, it only enervates and eviscerates our efforts. The “freight lobby” never makes such a mistake, which is why it always gets the main road and we get scraps in the gutter.

Janette passed away last year. There is no one to replace her.