A horde of Oregon and Washington’s “who’s who” of cycling showed up at the BTA’s Alice Awards and Auction Saturday night.

Last night over 700 people poured into the Oregon Convention Center to raise a glass and toast the work of the BTA and honor Oregon’s “bike heroes”.

It was the 12th annual Alice Awards and Auction, the party and fundraiser that has grown into the gala event for Oregon and Washington’s bike glitterati.

Before the festivities got rolling, BTA co-founder Rex Burkholder told me there were a mere 35 people at the first Alice Awards, and they crammed into a back room at Kell’s Irish Pub in downtown Portland.

My how things have changed.

Last night was a shining testament to the depth and breadth of support that exists for cycling in Oregon. 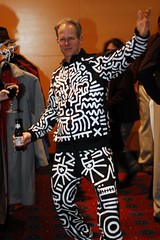 Burkholder, who now sits on the Metro Council, showed up in good spirits and the most memorable outfit of the night; a Keith Haring body-painting inspired jumpsuit (which he borrowed from his son).

Perhaps it was a metaphor for the bright ideas and bold action it will take for Portland to become a truly world-class biking city? Um, yeah, that’s it.

Other party-goers had more obviously Amsterdam-inspired outfits. I noticed a Team Holland soccer jersey, a woman with a delightful Dutch hat, and of course there were clogs, compliments of bakfiets owners and Europhiles Scott Mizee and Todd Boulanger.

Felted tulips, like the one worn here by Todd Fahrner, were hand made and passed out by PDOT traffic safety expert Greg Raisman and his lovely wife Beth.

Yes, fabulous fashion was everywhere as the silent auction action heated up…

The room was jammed with people and loads of great prizes of every imaginable sort. You could bid on everything from a bike inspired tile mosaic to a day in the life of a bike messenger.

Eventually the silent auction and socializing gave way to salads and bread as the scene spilled into the banquet room for dinner. 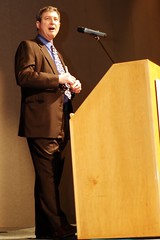 BTA Board Chair Hugh Bynum started off a string of speakers that warmed up the crowd for the main attraction of the night, the live auction.

But before the auctioneer took over, we were treated to yet another one of Evan Manvel’s entertaining speeches. Evan’s words ranged from how bikes are saving salmon and polar bears to a skit that involved a new invention called the iBike and a phone call from Steve Jobs’ lawyers (sorry, you had to be there).

The live auction followed and bidders got excited about everything from a custom Ira Ryan frame and fork to a cycling vacation in Umbria, Italy.

I didn’t get into the action myself, but it’s quite inspiring to see so many people step up and support cycling.

Once the adrenaline of the live auction subsided, BTA events diva Michelle Poyourow took to the stage and introduced the five winners of this year’s Alice B. Toeclips awards and a Lifetime Achievement Award.

Michael Ronkin, ODOT’s recently retired bike and pedestrian chief, was honored for his long and successful career. I will forever be a Michael Ronkin fan after he personally addressed an issue raised on this site and changed an ODOT policy as a result (thanks Michael! Good luck in retirement.)

And the five Alice Award winners were… 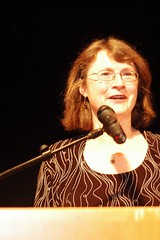 Yes, it’s sort of weird to report on yourself, but last night I became the lucky recipient of an Alice Award. After a very kind introduction I took to the podium and tried to say something meaningful in 60 seconds or less. I’m a rookie at public speaking, so I hope it all came out OK (it was all blur to me).

Kudos to the BTA, their sponsors and all the volunteers (including the bike parking crew) who made it happen last night.

With all the energy and support demonstrated last night, maybe becoming the Amsterdam of the U.S. isn’t so far-fetched after all.

well deserved jonathan.
i was rooting for you.

thank you for all the hard work you do.

Congrats, Jonathan. You’ve made a huge difference in this town (as I write this from Japan), by remaining topical, interesting, and updating frequently enough that I read your site every day. Good luck in your well deserved fame, and remember the small people!

Thanks for the yet again excellent coverage. As you noted… I was there but I still had to wait until I read this article so I could get the complete story!

Congratulations to all of the Alice Award Winners! …yes, including you, Jonathan. I look forward to the continued positive directional pull that we are bound to have with people like you all working for change in this community. I am proud to be a Portlander.

Looking forward to next year!!!!!

And, as I heard, the only award winner to get a standing ovation was none other than the host of this fine blog, Mr. Maus himself!

Congrats Jonathan. You are making a huge contribution to the bike community in this town, indeed to the whole community…isn’t that just about the same thing?

Yes, congrats. I think maybe we’re building some sense of community here…I had an instant buddy when I connected with peejay on Friday night at the Lucky Lab over the Bikeportland “brakes” discussion.

Way to go, Jonathan! A well-deserved award and recognition for the great and varied work you do.

Jonathan, you’re too humble, and your speech was awesome!

In my opinion, the biggest bang-for-the-buck in terms of getting new people onto bikes now is in the areas of education, socialization, and communication. You’re at the vanguard of that, Jonathan, and you ought to be recognized for it.

Congratulations Jonathan! It was such a thrill and an honor to give you the award. I’m glad I was the one who got to do it, won’t ever forget it.

Congrats Jonathan — if anyone deserved the award, it was you. Thanks for all your good work.

Jonathan, your award was much-deserved, and if you ask me, past due.

Jonathan – What would we be without you? Your contribution to this community has been inspirational. The luck is all ours. Thanks for all you do….. a well earned award.
Linda Ginenthal

Congratulations! I was thinking that you had to win it for all the connecting,informing,entertaining and goodwill you spread through this plastic viewing box we sit in front of.
cheers!
Vanessa
p.s. have a nice ride

I think the work you’ve done on this site not only warrants respect and recognition, but speaks for itself. While there are other forums for news, information and discourse, this particular site is probably one of the most well-known.

I’m so glad you won, Jonathan. You provide an invaluable service and should win every year, IMO.

Congratulations, Jonathan! Portland’s bike community is a much more powerful, connected and interesting team thanks to your energy and efforts. We are lucky to have you!

Feel the bike love Jonathan! I am so proud of you. As you could tell from the standing ovation – you are well respected for your work.

I am so pleased and happy for you, Jonathan. We are tremendously lucky to have you!

@nuovorecord – Actually, Michael Ronkin got a standing ovation too, but he was in the bathroom when they announced his award… Just one of those funny moments award ceremonies are good for. So Jonathan was the only winner who got to bask in glow of a standing ovation. The richly deserved glow, that is.

Jonathan,
You truly deserved this recognition. Your site truly has something for everyone. You provide us information we’d have to get from several different sites or sources or we wouldn’t get it at all. It enables all of us to be involved in one way or another.

So thank you for your hard work, good writing and fun photographs. I will also thank you with a $25 donation this week. You can count on it.

I’m very happy for you, I know you put so much into bikeportland.org and want to say that it really is making a difference!

okay, I have never posted a comment to your blog before but there is always a first! I have to tell you, in print, how proud I am of you for receiving the Alice Award! Reading the comments from all of your supporters only reinforced the fact that you are a true “bike hero”. I am so pleased that you are able to make such a tremendous contribution to Portland and beyond doing something you have such a passion for! I thank your supporters as well! WOW

You bring us all together and help us be a true community. Thank you.

Way to go, Jonathan! You do such a great job here, and NOW you head to the National Bike Summit. Bike love in action! Thanks again.