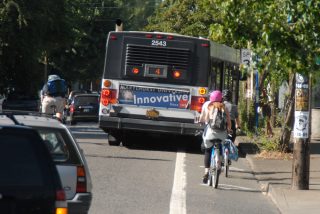 This is the problem bus islands can solve. (As seen on N Williams Ave before the lane was moved to the left side of the street.)
(Photo: Jonathan Maus/BikePortland)

On streets where buses and bikes are common, the “leapfrog” phenomenon has been a thorn in the side of the City of Portland for many years. It happens when a bus operator pulls all the way to the curb to service a stop — and temporarily blocks a travel lane used by bicycle riders. This behavior causes people to either stop and breathe toxic bus exhaust, or swerve around the bus into a more dangerous shared-lane environment. The issue has become more acute in recent years as the Bureau of Transportation has built more curbside lanes protected from drivers.

When a bus operator can still swing into a lane, it no longer qualifies as protected. 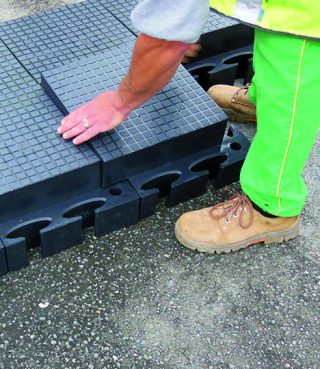 The solution is a bus island that provides a platform for passengers in the roadway (away from the curb) so it doesn’t block the curbside lane. The problem is, PBOT has been reluctant to install these in the past due to concerns about cost and a lack of confidence about the design and whether or not they’d work well for all road users. (Side note: The inability to solve the bus/bike leapfrog problem is one of the main reasons PBOT decided to shift the N Williams Ave lane to the left side.)

Now they’ve got a new plan: Yesterday PBOT staff working on the North Rosa Parks Way project told us they plan to install several pre-fabricated bus islands at select locations in the coming year. The islands would allow bicycle riders and other users of curbside travel lanes to continue through a bus stop while giving TriMet customers a platform to get on and off the bus. The islands will be purchased from a Spanish company called Zicla.

PBOT Project Manager Scott Cohen said two of the islands (dubbed Vectorial by Zicla) are coming to the southwest and northeast corners of Rosa Parks Way and Albina. Others will be installed on NW 18th and 19th along TriMet’s Line 24 and on the newly protected lanes on SE Morrison. The islands are modular and snap together “like Legos,” says Cohen. Cohen likes how the size of Zicla’s bus islands can be easily adjusted depending on the needs of a specific location. They’re made out of a recycles polyvinyl chloride (PVC) material which makes them relatively lightweight and durable in all types of weather. 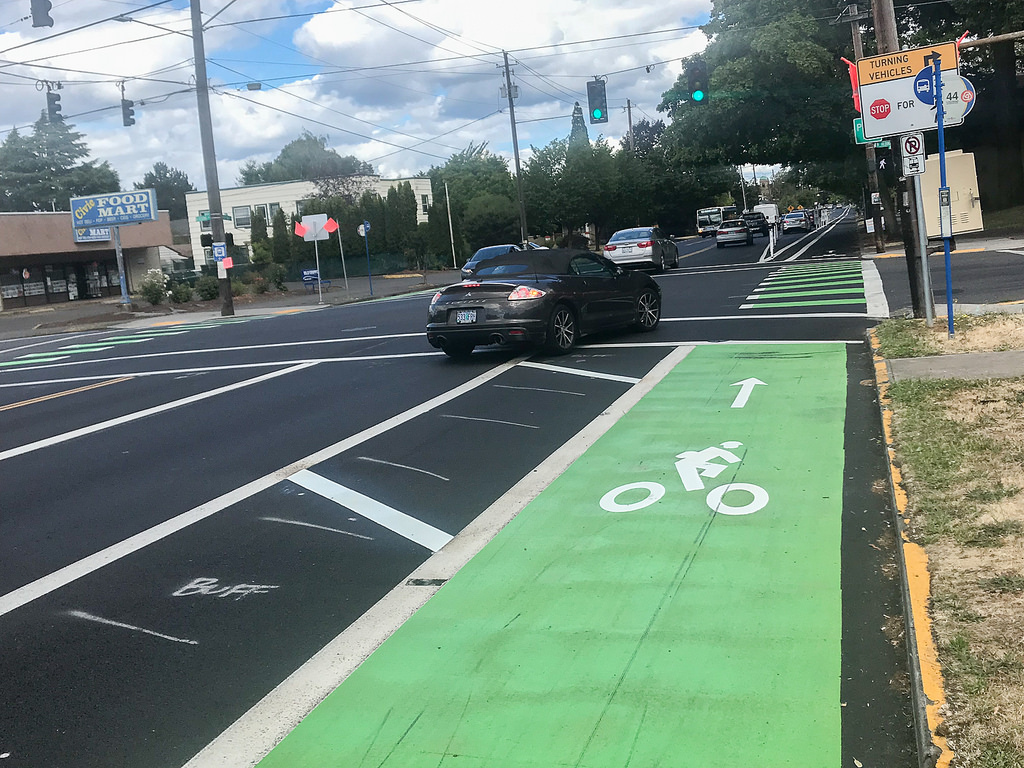 This bus stop on the corner of N Albina and Rosa Parks is one of the locations where PBOT will install a PVC bus island.
(Photo: Jonathan Maus/BikePortland)

Bus islands are common in major cycling cities like Amsterdam and Copenhagen (I saw them in action during a visit in 2013), and they’re beginning to catch on in the U.S. “We’ve talked to other cities including Los Angeles and Oakland; but it’s not an apples-to-apples comparison due to their weather,” Cohen shared. PBOT’s confidence in the Zicla product is based on how they’ve worked well in places with harsh winters like New York City and Pittsburgh. The use of bus islands in Seattle was listed by The Oregonian as one of 10 ways that city, “has blown past Portland in transportation moxie.”

Bus islands aren’t completely new to Portland, but they haven’t been adopted on a large scale or used on a busy thoroughfare. Our best example of one is on SW Moody just south of Gaines. Local tactical urbanist group Better Block PDX also gave us a look at a bus island during their Better Broadway demonstration in May 2016.

Cohen says the islands PBOT plans to use will require lane users to roll up and then down the bus platform. This ramp will likely address one of PBOT and TriMet’s main concerns with this type of design: getting bicycle (and scooter) users to slow down as they pass by bus passengers.

The cost of each island will range from $20,000 to $50,000 a piece depending on size. Once they are installed, we can expect them to be in place for several years while PBOT looks for funding for more permanent capital improvements. In the meantime, TriMet is developing a bus island as part of their Division Transit Project that they say could become the citywide standard.

Cohen says the islands will be installed by next spring.

For more about Zicla bus islands, read about their use in Oakland, New York City, Pittsburgh and elsewhere via this March 2018 Streetsblog article.