When it comes to roads, you might not think of them as often as you do the City of Portland or the State of Oregon, but Multnomah County is a big player in the region.

For those of you who like to venture beyond their central city bridges (they own and maintain the Broadway, Burnside, Morrison, Hawthorne and Sellwood bridges) the County takes care of many of the rural roads you hold dear. Think of cherished pieces of tarmac like Marine Drive, Larch Mountain, Newberry, Old Germantown, Rock Creek, Springville, the Sauvie Island loop, Gordon Creek and many others.

Now that I have your attention, you should know that the County just wrapped up a major public feedback process on how they should prioritize road investments for the next 20 years. And guess what? Improving bicycling conditions emerged as one of the top priorities.

Earlier this spring through a series of open houses and surveys for their Roads Capital Improvement Plan, the county heard from over 400 residents. The County has since tallied up all the feedback and they report that just over half of all respondents mentioned the importance of bicycling and walking. 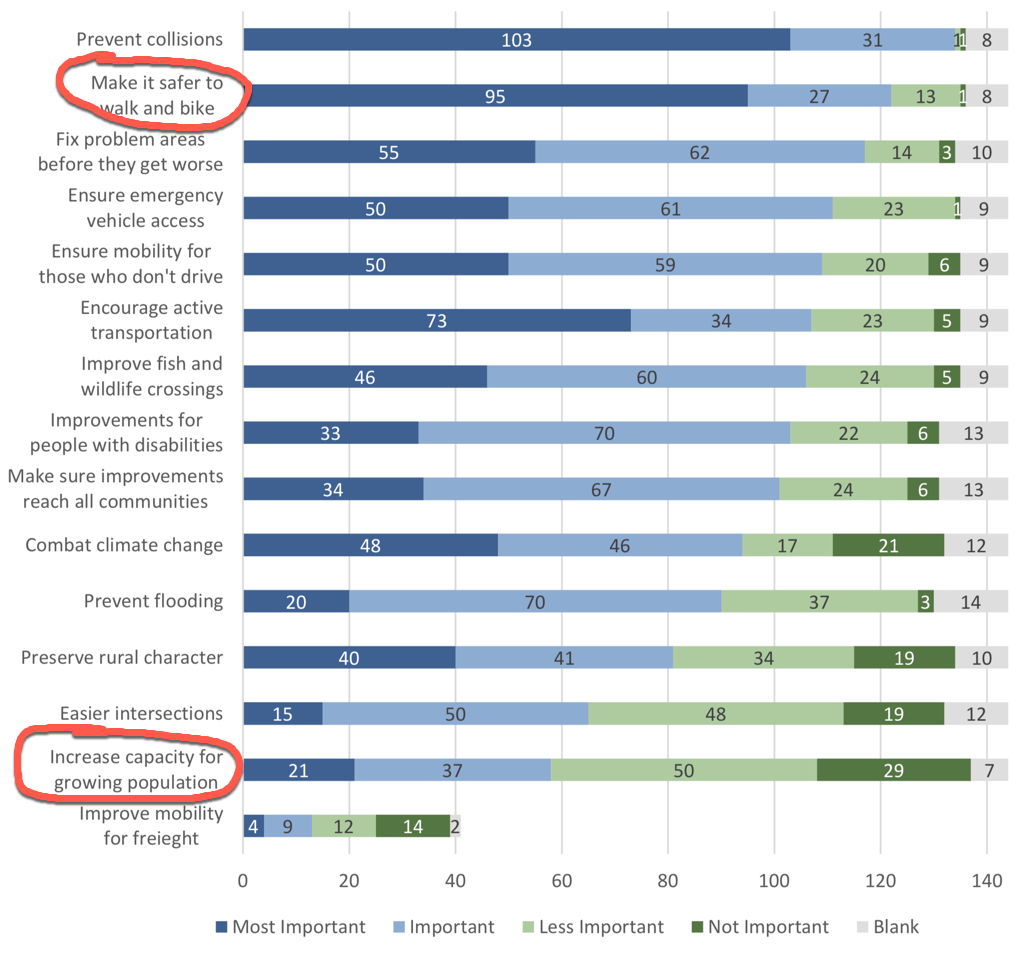 One part of the survey asked people to rank 15 actions on a scale of “most important,” “important,” “less important,” or “not important.” The actions included things like “preserve rural character,” “ensure emergency vehicle access,” and “fix problem areas before they get worse.” In the end, “Make it safer to walk and bike,” received the second highest ranking, just below “prevent collisions.”

At the bottom of the list? “Increase capacity for growing population” and “improve mobility for freight.”

When asked for comments on specific roads and/or projects that the County should pay more attention to, the road mentioned most often was none other than Skyline Blvd — a lynchpin of the local cycling scene. The County summed up feedback about Skyline as people being concerned that it is too narrow for car users and bike riders to safely mix, that people drive too fast, and that sight lines at intersections are not good. Also in the top five of responses were Germantown and Cornell roads which are also popular cycling routes that had similar feedback as Skyline.

When it comes to solutions for making these roads better, the County hasn’t laid out anything specific yet. They did mention in response to a question at one of the open houses that they’ll consider adding uphill bike lanes to some of the roads they manage. If I had to wager a bet, I’d say at a minimum we can expect the County to lower speed limits (the City of Portland has already done this on their part of Skyline south of McNamee), improve the quality of shoulders, and cut back vegetation.

And then there was the classic word-cloud exercise. The County asked people to choose five words that described their vision for getting around 20 years from now. Here’s how it turned out: 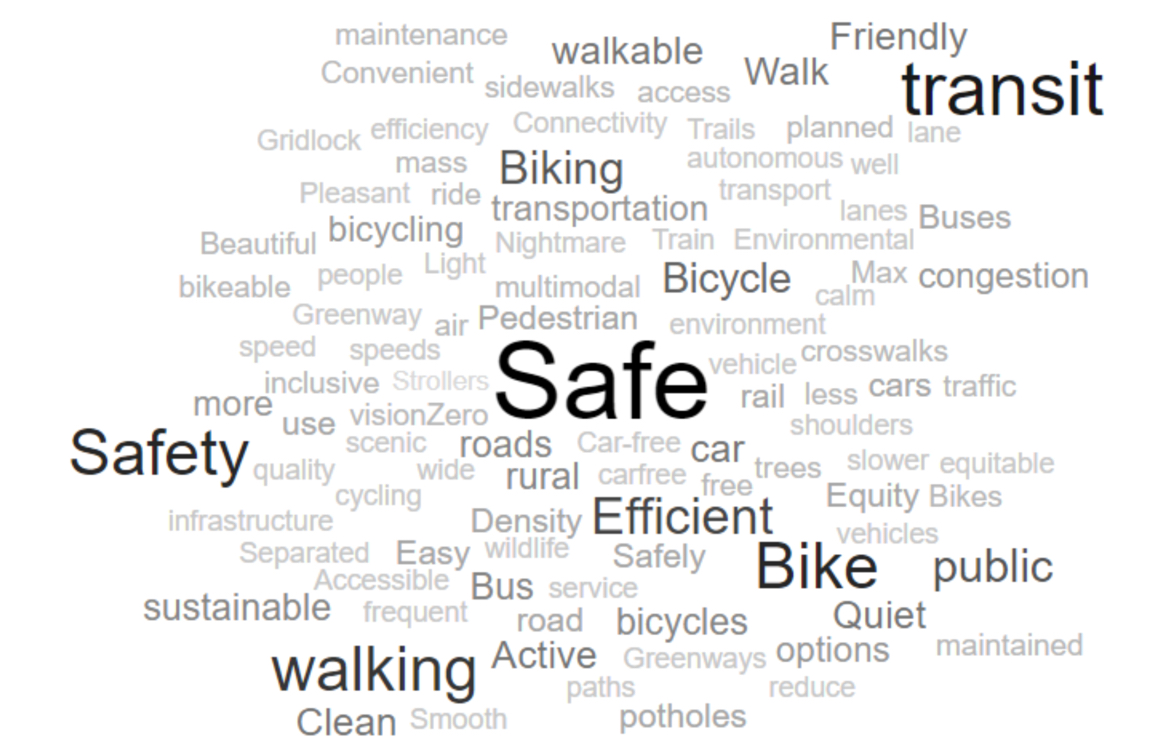 One more thing: It’s important to keep in mind who responded to the County’s survey. The vast majority were car drivers, but a significant number identified as bicycle riders. 87 percent of them were white and 98 percent spoke English at home. 54 percent were female and the average age was 51 years old. 46 percent had an annual household income of $100,000 or more.

Thanks for the report. The public open houses will actually return for October, 2018 and then again for early 2019. SW Scholls Ferry Road was the second-most requested item.

We DO want to increase capacity for the expected population growth – just not by increasing freeway and arterial lane-miles. Bus lanes. Let transit do what it is capable of.

What transit is not capable of is providing point-to-point transportation, or good service anywhere that is not downtown or along one of the few frequent service lines we have. Or providing service anywhere late/early. Most of these problems are wholly unrelated to congestion or lane capacity or configuration.

Our city is simply not well structured for providing high quality transit to the majority of residents at a price we’re willing to pay, and the energy cost per passenger of doing what we do is surprisingly high.

What buses should be rerouted?

I don’t think it is a question of rerouting buses. I think the fundamental model of public transit as currently conceived is simply not a good fit for the urban form we have built. In the places, and for the people, where it works, it’s fine, but there are reasons why it is so hard to dramatically increase ridership.

Luckily, there are new models on the horizon.

No, that is an old model, which is great as far as it goes, which is not that far. The Blue Line was deliberately located to avoid already built areas so that new transit-oriented development could be built around the stations. Some was, but it did not turn out to be the urban nirvana planners hoped for. Of course, as with all utopian dreams (hello, New Urbanists!), it never is.

the energy cost would be a lot lower if we had not ripped out the 20 or so electric trolley, trolley bus, and electric railroad lines. it’s funny how something that was possible in the 1950s is not achievable now, even though we are a far wealthier city.

I know, right? Things were much easier when labor was cheap and exploitable, and we didn’t have to worry about things like safety.

You may be right about the trollies, but that’s water under the bridge.

When you’re considering energy costs, don’t forget that we spend $1200+ per US resident subsidizing gasoline, per the IMF:

I was thinking in units of CO2, but Trimet also enjoys the benefits of cheap fuel.

Energy cost per passenger for units of CO2? I don’t follow.

I’d wager that a bus with 12 people on it is receiving far less gasoline subsidy per mile than 12 SOVs. Especially after TriMet transitions to all-electric buses.

How much CO2 is emitted per passenger mile.

If buses convert to electric, and cars don’t, then of course the equation will change.

Transit can’t serve an area like Forest Heights well. The terrain and distance makes cycling a non starter for most people. The roads aren’t wide enough for dedicated bus lanes.

That is one reason why NW Miller Road needs a wide sidewalk and perhaps a bike lane. It connects NW Cornell Road to SW Barnes Road where bus # 20 is located and a short distance from bus # 50. That piece of Miller has sections under the jurisdiction of Portland, Multnomah, and Washington County.

I wear many hats
Reply to  rick

What rural Multnomah county needs is an emphasis on driving human speeds on these roads. I’m afraid that a wider road bed will just encourage more 65 mph driving on skyline, miller, Germantown, Kaiser etc. A few choke points would dramatically slow the highway speed drivers, as would the occasional speed hump. Uphill bike lanes that allow 2 abreast riding would be nice also, but again, every sport driver in their Porsche or on their crotch rocket will use that road space to drive corners at 70mph.

rick
Reply to  I wear many hats

I agree. Most of Miller is a straight line in that section and the sidewalk that is in the middle of that section on the east side has a big shoulder. Miller to the north of Cornell Road needs bike lanes. Washington County plans to study what road widths should be for the future. They might make Cornell Road to the east of Cedar Hills Blvd for 12 foot car lanes for next year’s cycletrack project. Speak up now.

John Liu
Reply to  I wear many hats

rumble strips – the kind that are pressed into the asphalt – will dissuade any sports car driver or sportbike rider. They are nasty. Just need to make sure they are placed on the shoulder line rather than taking up the shoulder or bike lane. You don’t need continuous rumbles, a couple feet every 20-30 feet is plenty.

Great news. Keep it up

It is interesting to me that Skyline, Sauvie Island Loop, Larch Mountain, and Newberry are some of the roads I feel the safest on. Yes, there are the occasional speedsters on Skyline who are definitely driving over the speed limit but as a whole the traffic has always seemed light and drivers have been exceptionally careful and prudent near me on all of those roads. I cannot remember a time in recent memory when I felt threatened or unsafe on those roads, which I cannot say the same for SE Portland, where (without a hint of hyperbole) I feel like every single ride has at least one instance where I feel unsafe because of car drivers.

Not to look a gift horse in the mouth, I do like that making things safer for bikers and walkers is seen as a priority. Making plans for maintenance of biking spaces (bigger shoulder, slower traffic, and keeping back plant growth) are definitely strong wins in my book.

And, I would put forth that with Newberry currently unable to support thru-traffic, it has become the best way to bike up to Skyline this year from the North end. Germantown is simply not an option with its traffic loads. A biker might dream of Newberry never changing back.

Dan A
Reply to  Paul B

I’d trade Newberry for McNamee or Logie Trail Rd being shut down to through traffic. There’s no reason for McNamee to be a through road right next to Cornelius Pass, and the top half of Logie is gorgeous to ride on and a terrible road for cars.

rick
Reply to  Paul B

A Multnomah County traffic document showed that McNamme has less than 500 cars per day on it while Newberry has far more.

Hm, I have never gone out to Logie. I get fed up with 30 pretty darn quickly, so I have never biked out that far. Will have to investigate.

Dan A
Reply to  Paul B

I take Skyline west to McNamie or Rocky Point, head down to 30, and then up Logie and back east on Skyline (or down Beck). Those routes only have 1 to 3 miles on Hwy 30. I just find Logie to be a lot more quiet, shady, and enjoyable than Newberry.

rick
Reply to  Paul B

Try Rock Creek Road. It is near the McMenamins on Old Cornelius Pass. The section of Rock Creek right by Old Cornelius has gigantic pot holes but they disappear after about 200 feet and it becomes Multnomah County which recently did pavement repair work for their section of it. It mostly parallels a creek and there is a lot of shade from trees.

Yeah, that’s the way I get up to Skyline. That and Old Germantown are very quiet, almost no cars on them at all.

rick
Reply to  Dan A

Have you rode downhill on SW Scholls Ferry Road from Sylvan ?

Nope, never have. I live/ride on the north side of 26.